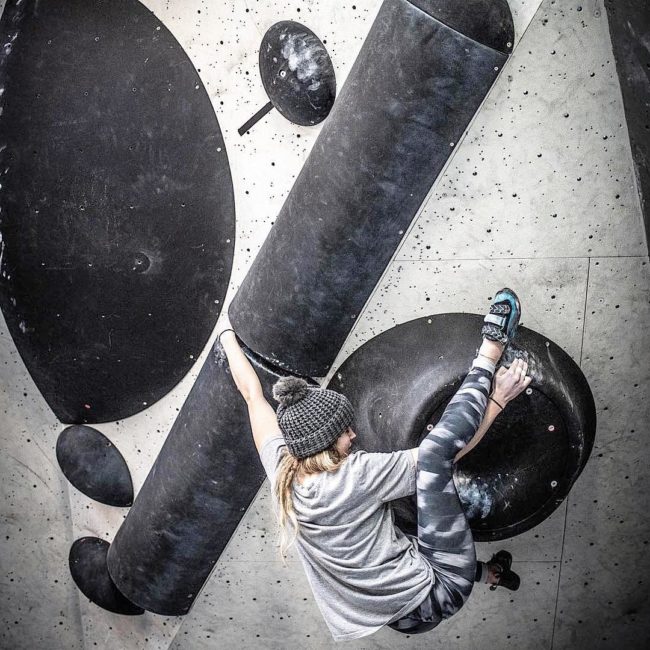 You walk into a new gym hoping for a good climbing workout. You are eager for the stretch and the pump. Excited voices of other climbers echo throughout the space underneath overhead music. It smells faintly of sweat and chalk. You look around at the walls and assess your climbing options. In addition to color-coded paths of jugs, crimps, and slopers there are now some routes with huge wall-altering volumes. You can’t figure out the beta for these routes just by looking. You walk up to one and palm the starting holds. It becomes apparent that you will need to use your whole body in unfamiliar ways to get to the top. A flutter of excitement passes through you as you prepare to try something new.

The newest thing in climbing gyms—besides coffee shops, yoga classes, and cross-fit style training programs—is utilizing large fiberglass volumes in route setting. These shapes can be the size of a coffee table, but since they are constructed from fiberglass, are remarkably lightweight for the size. Fiberglass as a medium allows for rounder shapes that cannot be achieved with wood volumes, and this roundness promotes open-handed interaction with the holds and results in moves that require precise balance and body-tension.

“Imagine a basketball sliced in half across the equator and mounted on a wall,” said Chris LoCrasto, describing some of the volumes available from the European hold manufacturer 360, which produces the largest shapes on the market. LoCrasto, along with Kyle Clinkscales and Stan Borodyansky, owns and runs the Texas-based Summit Gyms, and now the three also co-own Premium Holds, a new company that imports European holds for an American market.

Unlike other climbing holds, volumes can change the angle and shape of the wall in drastic ways that make the terrain feel fresh and new. For a route setter, this opens up a new world of possibilities. The movement on routes with volumes is not necessarily more difficult than standard climbing, but can be much harder to execute on the first try. These holds can also force more dynamic and gymnastic movements than would be made on more standard incut holds. 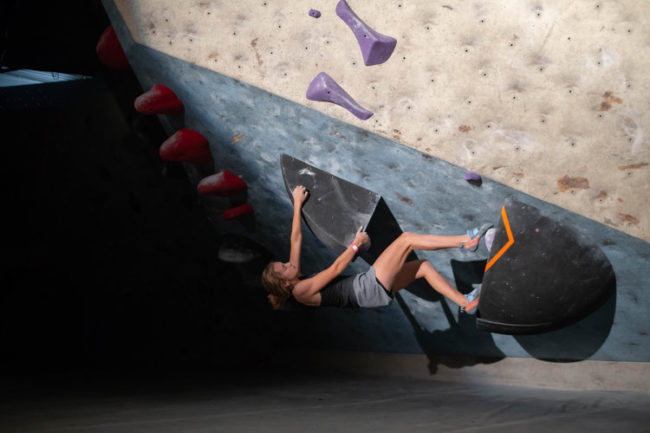 In climbing competitions, one of the biggest recurring challenges is figuring out how to set routes that continue to challenge elite-level competitors without becoming repetitive or predictable. Now that climbing will make its debut in the Olympics, there is also a desire to make climbing more audience-friendly. To attract viewers, climbing competitions need to be a little more showy and simultaneously be easy for an onlooker to decipher who is winning. The typical setting style was no longer meeting these needs.

Enter fiberglass volumes. Now it is common to watch a competition where climbers are making huge leaps between holds, balancing precariously on shapes with no visible incut, and contorting themselves between shapes, sometimes with their backs facing the wall or toes wrapped around the edge of a large shape. Climbing comps are becoming a little more like parkour.

Routesetters refer to this style of climbing as higher risk: the climbs involve more coordination and more learning in order to be able to successfully complete them. This type of movement is very difficult to create with small holds, but volumes encourage it.

The International Federation of Sport Climbing (IFSC), which is the organization responsible for World Cup competitions, has specified guidelines for route setters. For bouldering competitions setters must use at least 500 different holds, half of them need to be micro-sized, and 30 should be volumes of different sizes. For lead climbing, the number of holds is doubled to at least 1000, but they are still required to use 30 volumes. This requirement shows that being able to climb well on volumes is necessary for anyone hoping to place well in international competitions. 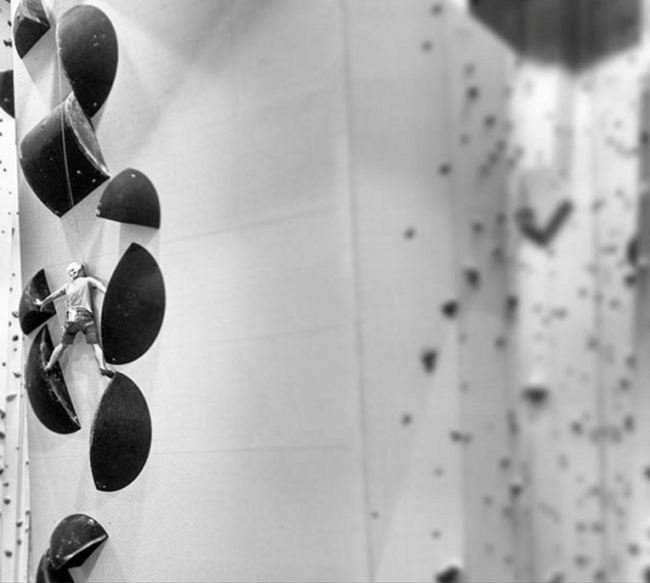 But what about every day gym climbers? The evolution of competition climbing has begun to trickle into gyms around the country. Routesetters are hungry for something new and different, and climbers themselves are becoming familiar with more creative and dynamic movement.

“If you are an outdoor climber and all you want to do is come to a gym to get fit, well, every gym offers that,” said LoCrasto. “We want to create something that isn’t in every climbing gym.”

Some gyms are experimenting with different setting styles in different areas of their gyms to provide customers with options. Movement RiNo, outside Denver, is one such gym. There is a traverse wall, a training area, and boulders with more basic routesetting that allow for top-outs. Along the perimeter is the World Cup Wall. “In this area we have the opportunity to set problems in a style that is more competition-oriented. Most of the time when people hear that, they’re like, ‘Oh so there is only really hard competition problems,’ but that’s not what we’ve done. We set moves that are a little more complex, a little more technical, and we have done so through the entire difficulty range, all the way from beginner to elite World Cup level competitor,” says Ryan Sewell, the head route setter for Movement Gyms. Ryan thinks having these different styles available in one space allows climbers visiting his gym to have a richer experience. “A climber on the traverse wall can look over and see somebody else trying a really cool competition-style coordination jump and walk over there and try that with them. People are more likely to have that chance encounter, and go try something that maybe they otherwise wouldn’t.”

Premium Holds Brings European Volumes to the US

The rise in popularity of volumes has revealed a weakness in the American market: there is a lack of fiberglass brands in the United States. The owners of Summit Gyms in the Dallas-Forth Worth area realized there was room for this market at a route-setting workshop with Simon Margon, a Slovenian IFSC route setter who also owns the hold company 360. “The holds he brought to us were so different from anything in the US market, it was shocking that these weren’t more commonplace,” LoCrasto said. “I’ve been route-setting for about 15 years, and it was evident that there was something different and special about these holds.”

Without much knowledge about distribution or shipping logistics, LoCrasto and his business partners began importing and selling holds from 360. After about six months, several other European companies that wanted to break into the US market reached out to them. Now Premium Holds distributes for four different hold companies, each of which offers something different: 360 produces polyurethane and fiberglass holds, including very large fiberglass volumes; Simpl makes dual tex wood volumes; Squadra produces polyurethane and fiberglass holds and wood volumes; and Cheeta makes wood volumes plus holds from polyurethane and fiberglass, and nearly every one of Cheeta’s shapes features dual tex. Dual tex is a surface that has two different textures, rough in places and smooth and slippery others, so that foot holds are trickier and thumb catches nonexistent.

The shapers from each of these hold companies are experienced IFSC route setters— Margon owns and shapes for 360 and Simpl, Reini Fichtinger owns and shapes for Squadra, and the legendary Laurent Laporte, who is the longest tenured IFSC setter, owns and shapes for Cheeta. These setters have developed their shapes out of necessity or to achieve a desired result when outfitting for a competition. “I had all these setting ideas and I realized that the holds I needed didn’t exist. So I made them,” said Margon of his signature large volumes. This results in a different style than the commercial shapes available in the US. In general, American companies make predominantly incut holds, whereas European companies make more rounded shapes with less incut. By bringing holds that foster a different style of climbing to American gyms, American climbers are being exposed to new and exciting movement.

“At the end of the day, climbing is fun. Setting routes with volumes offers something new and fun to do,” LoCrasto notes. “You don’t come into a gym and just see fruity pebbles on the wall anymore.”

Premium Holds was inspired by European setters who began shaping holds that allowed for a complete reimagination of climbing movement. Established in 2016, the Premium Holds lineup includes hold brands owned by some of the greatest routesetters and shapers in the world, and each shape Premium distributes is a glimpse through the lens of those setters. Now distributing 360, Cheeta, Lapis, Nature Climbing, Simpl, Squadra to North American climbing gyms.