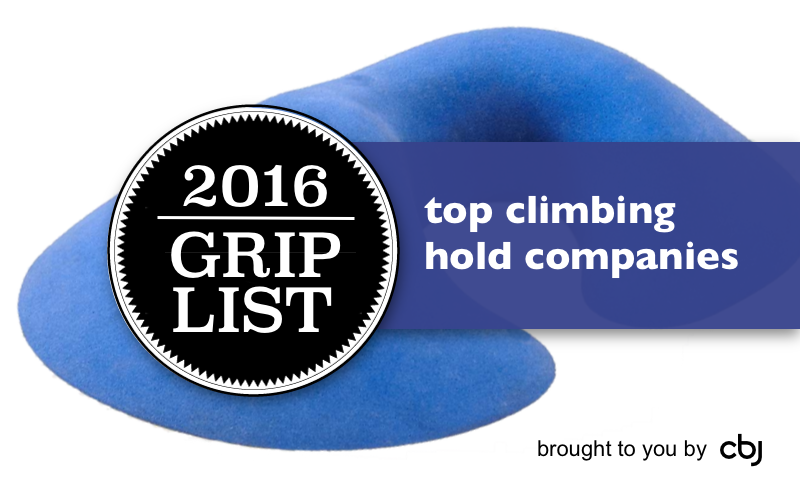 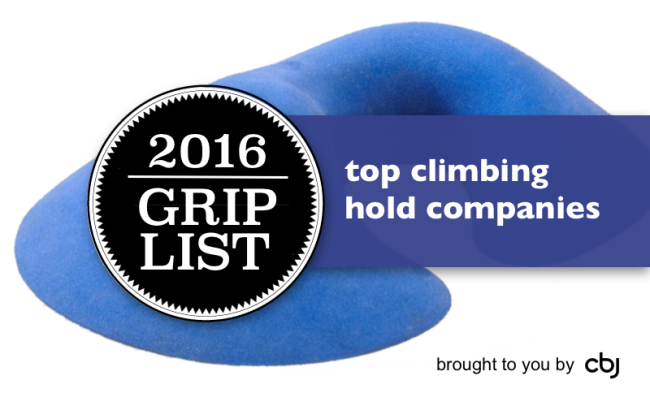 Welcome to the 3rd annual Grip List! CBJ collected votes from North American routesetters as to which climbing hold company was their favorite in 2015. The voting process was the same as last year but this year only the top 5 companies will be given the “Official Selection” award. This was due mostly to the fact that the top 3 brands received 52% of the votes leaving the companies in 6th – 10th place with percentages in the single digits. Like the last two years, we are continuing to hand out the “Favorite Hold Company of All-Time” award.

Since this is the first year we’ve limited the list to five companies we felt that our readers would like to know which brands were in 6th through 10th place. So we begin the 2016 Grip List at #10 with Metolius which followed Climb-It at #9. The So Ill Climbing boys held strong at #8. Making their first entry on the List and coming in at #7 is Swiss grip maker, Flathold, which was right on the heels of the stalwart purveyor of plastic, eGrips at #6.

This year we are also adding a new category, “Favorite Volume”. This is awarded to the company that received the most votes for North America’s favorite volume. The winning company does not have to only produce volumes but can make bolt-on holds as well. We would be remiss if we did not mention that Motivation Volumes came in a very close 2nd place in the volume category. 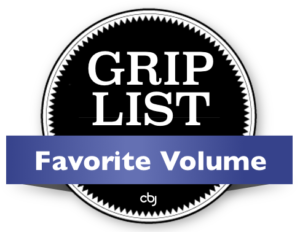 Taking the first-ever Favorite Volume award is Flathold. Coming straight out of Switzerland, this volume and hold company made a huge splash earlier this year when they hit the North American climbing scene. Even though Flathold makes bolt-on urethane holds, it was their all black, sloppy scoop volumes that lit up the imagination of setters. Within the year these volumes started transforming America’s climbing walls and made setters job that much more enjoyable. One voter commented, “Hands down the best giant-terrible slopers. There’s a reason they’re in almost every large gym in America.”

Until recently most popular volumes were made of wood and tended toward the geometric. Flathold instead produces volumes that are made out of lightweight fiberglass with smooth rounded edges. This new style allows setters to bring moves into the gym that climbers previously have not been exposed to. “Their shapes lend themselves to a unique style of climbing that is rarely seen in the typical climbing gym. It offers customers a chance to step out of their usual focus, it is fun to watch them be thrown for a loop,” wrote one Grip List voter. Other companies make rounded fiberglass volumes but it was Flathold that really blew the lid off the market.

Flathold’s founder, Manu Hassler, an IFSC Chief setter in his own right, has amassed an impressive collection of some of the best setters in the world to help sell Flathold around the world. This includes IFSC Chief Setter Laurent Laporte, US-based International Chief Chris Danielson, and the world renowned guru Tonde Katiyo, currently residing in Canada. This team along with Hassler’s partner Mathieu Achermann are showing the world that their Swiss penchant for perfection is what setters want. One voter’s comment sums it up nicely, “I had never set with Flathold until this year, and man I’ve been missing out! Simply put, they have near perfect volumes that are well worth the price!”

Element Climbing is the nerdy neighbor you had as a kid but never talked to while in school. They may not live in the hippest neighborhood, Georgia, or have the slickest marketing, but they know who you really are and what you really need. If they could hug you through the Internet they would.

They’ve been supporting climbing gyms since 2008 by giving them some of the best value for the price, as well as a super refined gym ordering system. They aren’t afraid to dig into the science of grip making which is evident by their new NEO-LITH GT urethane mix. In fact Element is the only company in the top five to produce their own holds in-house. We’re not talking a dingy garage operation either. These guys operate a top notch pour house that other up-and-comers are signing on to.

In 2015 Element brought to market almost 200 new shapes and signed shaping icon Louie Anderson as their lone hold rep (Anderson also reps for Kingdom and Kilter). EC did drop one spot from their 4th place finish last year, but remains one of the major players on the North American climbing hold scene.

The Rock Candy crew, led by Nathan and Liz Yokum, made huge strides in 2015, moving up 7 spots and back onto the Grip List! They’ve always been one of the top brands on the market but this past year was a particularly good one. Over the last 12 months they’ve put out 150 new shapes spread throughout four new sets. This includes Nathan Yokum’s original Gastropods series, which are a slopey yet juggier version of their ever-popular Corpolites, as well as the new Jaspers which also fall into the slopey-juggey category. In fact one voter commented that Rock Candy has, “Positive holds for steep terrain that are NOT jugs.”

As CBJ wrote back in August:
“All those new shapes will definitely get the attention of buyers and setters and prove that quality and quantity overcome hype any day.”

The Yokums also completely re-tooled their online gym ordering form, making it one of the best in the biz. They did all this and opened a bouldering gym, The Rock Mill, in their home town of Akron, calling it a “tasting room” for their holds (plus raise two kids!). They have been building their brand since 2007 and continue to deepen their market presence by hard work and smart marketing. Their plans to grow Rock Candy, as well as the climbing gym, are not over yet. 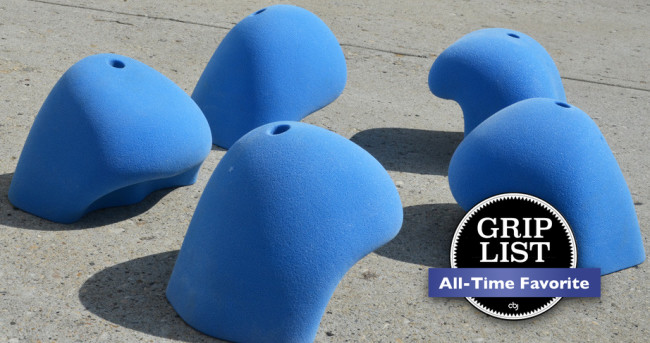 What can we say about Teknik that hasn’t been said before? Setters have been loving their simple designs and comfortable grips for 16 years. They’ve created some of the most iconic and classic shapes ever made. And that’s why Teknik has once again been voted “All-Time Favorite Hold Company” for the 3rd year in a row!

“Classic! What do they make that setters and climbers don’t like? That would be a short list if any at all,” wrote one Teknik voter. “Classic line with nothing but classic shapes,” wrote another.

As great as their established line is, and it is great, many setters are loving the new shapes that came out in 2015. Teknik founders Zoe and Seth Johnson brought to market 155 new shapes including the Cobra Commander and Geomatics, which were by far the most talked about holds Teknik recently put out. They also decided to bring back an early millennium favorite, the Plats, the molds of which were destroyed years ago. They’ve re-shaped the Plats and expanded the line to include larger and one-handed versions. They also produced what could be considered the ultimate simple shape, the Geo Flats, which are basically a volume with no volume.

Most Grip List voters mentioned Teknik’s clean simplicity as the reason for all the praise. “They didn’t invent simple shapes but they did master them,” wrote one voter. And another said about Teknik, “Simple shapes that are still so much fun to climb on, subtle differences and variations that keep them interesting after all this time.”

Teknik doesn’t put out nearly as many shapes as other companies and they’re not known for flashy marketing…or marketing at all. But it doesn’t seem to hurt them in the least. They are still the company that all others hope to emulate.

The one word used most to describe Kingdom Climbing is massive. “Kingdom and their massive sets with massive features couldn’t have gotten anyone more stoked to put up some real quality routes and problems,” said one voter. And that goes along with Kingdom’s philosophy which is: Bigger is Better. Yes they make some of the largest holds on the market but they also have some of the largest theme sets in the business. One voter said, “Their sets have enough holds in them to create full routes with a [shared] aesthetic through the line, and enough diversity in difficulty to force creativity.”

After being at the top of the mountain last year, Kingdom dropped one spot on the Grip List to 2nd place. This is still an achievement for a company that is only a few years old. In that short time Kingdom has created what are sure to be perennial favorites. The new Fragments and Lugs are as good as it comes for incuts and jugs. They’ve also introduced what they are calling ‘Emperor’ size. Some of these new Emperors, like the Rok Blok, measure in at 38 inches long and stick off the wall 14 inches!

Taking the grand prize on this year’s Grip List is Boulder-based Kilter Climbing. And this year Kilter dominated! From the moment the Grip List survey went live Kilter started racking up the votes. They regained the top spot after a 3rd place performance in 2015 by releasing nearly 400 new shapes! But quantity will only get a hold company so far. They must also have a line that setters are drooling over and can’t wait to get their hands on. And Kilter has done that by bringing to market a line full of the go-to holds that make a route pop and have climbers tripping over themselves to get their hands on them.

Ian Powell, the burly visionary behind Kilter, has created an aesthetic that is fundamentally different than anything on the market yet is so very familiar to setters. “In my opinion, they are finding the path to achieve the balance between great looking and highly functional holds in a solid way,” said one voter.

From their unique foot holds and slab slopers, to their Kaiju line of mega sized features, Kilter is giving setters everything they want. “Kilter offers a line-up of shapes that suit every style of wall a gym can offer. From small holds that act as your meat and potatoes to the big shop pieces, they have it all.”

One of the other aspects that put Kilter over the top was the love customers heaped on the Kilter website, especially their 360 degree rotation photos. Other companies have tried to do this but Kilter is the first to really nail it.

If one peaks into the Kilter shaping studio in Boulder, they will find hundreds of finished foam shapes waiting to be molded. These shapes, all carved by Powell, are arguably even better than what’s out right now. Powell is also bringing in some new flavor with his Haptic line, which is sort of a brand within a brand. Just this year Haptic released an additional 300 new holds. These holds are shaped by pro-climbers like Alex Puccio and Jimmy Webb, as well as pro-routesetters like Keith Dickey and Jeremy Ho. Doing the bulk of the Haptic shaping is the very talented Will Anglin, whom if you don’t know of him yet, you soon will!

The unrelenting drive that Powell puts in to everything he does will continue to push Kilter in to the future, and force everyone behind him to play catch up.