In 2013 the American climbing gym industry saw a 10% growth rate over the previous year, with a total of 28 new facilities opened. The year started out with 282 commercial climbing gyms* and ended with 310.

Of the 28 new climbing gyms that opened, 13 were bouldering-only (or bouldering-mostly) facilities. The trend towards more bouldering gyms is very exciting for the industry since bouldering gyms can fit into urban areas where a large traditional gym could not. It is often easier for a developer to find a building suited for bouldering, which only requires twenty-foot ceilings, and these building can be much less expensive.

In fact Jeff Bowling, Senior Manager at Touchstone Climbing recently told CBJ, “One of the cool things about bouldering gyms is that they let you get into places that maybe rope gyms can’t.” Touchstone recently opened a bouldering facility called the LA.B in downtown LA.

Bouldering gym developers are still trying to find the perfect model and layout for a modern, American bouldering facility. From what we know about the gyms in development for 2014 we expect even more new bouldering gyms, with some of them likely to find themselves on next year’s list of the top ten biggest gyms in the country!

While the new bouldering gym trend deserves attention, it was traditional gyms that stole the spotlight in 2013. For one, these new gyms are trending bigger than gyms in the past; of the fifteen mixed-use climbing gyms that opened this year, two made the list of Top Ten Biggest Gyms.

This year highlighted that multiple locations are becoming the norm, with more than half of 2014’s new climbing gyms representing the second, third or fourth location for their respective gym owners. Central Rock took the bold step to open two gyms in one year, one near Hartford, Connecticut and one in Watertown near Boston, doubling the size of their climbing empire from two to four locations. Touchstone also opened two bouldering facilities this year, the Dogpatch in San Francisco and LA.B in Los Angeles.

In America’s southeast, Triangle Rock Club opened a new 13,000 sq. ft gym in North Raleigh, North Carolina along with a huge expansion of their original facility in Raleigh.

Downtowns and major cities were popular locations to open a new climbing center. The Denver area saw its first major gym development in 20 years with the beautiful new Earth Treks that opened in Golden, Colorado. High Point Climbing in Chattanooga, Tennessee took on the task of opening the largest gym in a downtown with their 28,000 sq. ft. gym. In California, Chris Sharma and his partners opened the highest profile gym of the year, Sender One, in the Los Angles metro. Sender and LA newcomer Touchstone are redefining the LA gym scene with their modern, professionally managed facilities.

Today’s gym developers are also pushing against the accepted conventions. Many are now promoting their fitness and yoga amenities as much as their climbing. Others, like Brooklyn Boulders, are re-imagining indoor climbing as a mixed use facility for promoting fitness, socializing and retail. This year Brooklyn Boulders opened their second location with a 40,000 sq. ft. building near Boston. This new facility boasts yoga and saunas, retail and food spaces, an Active Collaborative Workspace, a fireplace lounge, and, oh yeah, a 25,000 sq. ft climbing wall.

With all this new construction it’s interesting to see which wall builders might also be growing their businesses in America. Rockwerx was this year’s top builder of new traditional gyms, while owner built walls continue to make up the largest share of new bouldering gyms. As bouldering and traditional gyms continue to get bigger, we expect the proportion of owner built walls to fall.

Preliminary data for proposed gyms in 2014 indicate that Walltopia may take the lead as the number one wall manufacturer for commercial climbing gyms in the US next year. 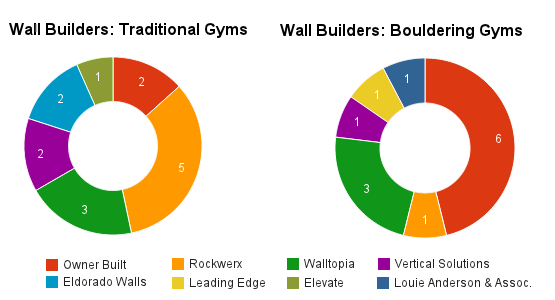 Most experts agree that a good industry growth rate is equal to the growth rate of the overall economy. Over the last half century the US GDP average growth rate has been around 3%; for the third quarter of 2013 it reached 4.1%.

So with a 10% growth rate the climbing gym industry is strong and is growing at a sustainable rate. We’re happy to say that we are not in a bubble but instead see a nicely maturing industry with plenty of potential for investment and innovation.

One other aspect that cannot be overlooked is the number of existing gyms that have renovated or expanded their facilities. Bend Rock Gym in Bend, Oregon took on one of the largest renovations by constructing a completely new building and essentially tripling their climbing area by connecting it to the existing gym. Hoosier Heights made an impact in the Indianapolis climbing scene by adding 22,000 sq ft of climbing making them the 2nd biggest climbing gym in the US with a total of 33,000 sq .ft. of climbing.

How Does Climbing Stack Up?

To help put this all into perspective let’s look to another quickly growing industry: trampoline parks. The International Association of Trampoline Parks (IATP) states on their website, “Today, there are over 160 trampoline parks in existence around the world, with an estimated 50 parks opening over the next twelve months.”

The first tramp park opened in 2004 and the industry has gained media attention, both for their incredible growth rate (31% for 2014) and their notorious accident rates.

Although tramp parks and climbing gyms share numerous similarities — both depend on large customer groups, large buildings (an average of 18,000 sq ft), high capital costs ($1 – $1.5 million) — they are far apart in terms of injury rates and regulation. Which is a good thing.

Tramp park injury rates are close to thirty-five times that of the climbing industry, with Tramp parks receiving 2 injuries per 1,000 visitors versus 2 injuries per 34,356 visits at the climbing gym (according to these two studies). With all these injuries and the inevitable lawsuits that go with them, it will be interesting to see if the surge in trampoline park popularity can withstand the PR nightmare of participants receiving pulled muscles, shattered leg bones, broken necks and at least one death.

It should be noted that the climbing gym growth rate is based purely on the number of new facilities and not on visits or revenue; because of the private nature of business in our sector this information is extremely difficult to obtain. So while we know that more climbing gyms are opening we do not know if the existing gyms are making more money than they were the year before.

One can speculate, however, that if large gym developers like Touchstone, Earth Treks and Stone Summit are expanding their franchises they must be seeing profits from their existing enterprises to warrant (and fund) the investment of additional locations.

This year has been a great year for climbing gyms and next year looks even better. There are already more than thirty commercial climbing gyms planned for 2014 with several more expected to be announced. Over the next few years there may be a rush to get into the top markets before someone else does. This will make for very exciting times ahead for the climbing gym industry.

A special thanks to to Jon Lachelt for helping CBJ compile and analyze the data for this report.

* We define “commercial climbing gyms” as for-profit or co-op owned facilities in which indoor climbing is the primary purpose of the facility. We do NOT include private health clubs that have a climbing wall, nor do we count YMCA’s or other non-profit community centers, college, university and primary school walls. These are an interesting component of the indoor climbing community, but are not included in our analysis of the business of indoor climbing.