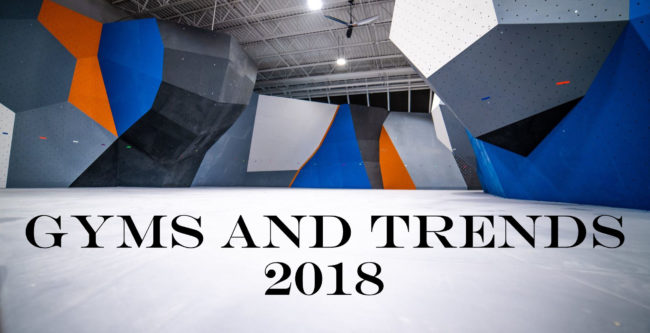 On the surface it may seem like the climbing gym development scene was quiet in 2018.  Afterall, major gym operators were mostly busy preparing for their 2019 and 2020 projects and not creating the fanfair they usually garner.   But in America, we saw the highest growth rate on record, the most gyms opened in a single year, and more States saw new gyms than ever before.

This success rode on the coattails of climbing, in general, already being more in the public consciousness due to the sport’s inclusion in the upcoming Olympics.  And major buzz and attention in 2018 stemming from the mainstream success of two movies—The Dawn Wall and Free Solo. When Free Solo eventually won an Oscar for Best Documentary Feature, that buzz only increased.

This all happened on the heels of a very successful year for the industry as reported in the 2017 Gyms and Trends.

Of those 50 openings, California boasted the most. The state saw eight new gyms opening, followed closely by Colorado with seven new gyms. But even smaller states such as Tennessee and Virginia saw multiple new facilities open too with four each.

Of particular note is that nearly half of the new gyms that opened were bouldering-only facilities. That is more than the previous year, and puts the United States’ design trends more in line with those of Europe and Asia—where bouldering gyms have been the norm for years.

While most of the bouldering-only gyms are, by nature, smaller than gyms that offer mixed climbing disciplines, the smaller aspect allows the bouldering space to easily fit snuggly alongside non-climbing business ventures. For example, Sage to Summit, a new bouldering-only gym in Bishop, California, contains 1,200 square feet of bouldering space. But Sage to Summit also focuses heavily on mountain running and sells equipment catering to that clientele (footwear, backpacks, tents, bivvy sacks, etc.).

Similarly, the Terrain Park Climbing Center in Chico, California, which opened last summer, offers 2,200 square feet of bouldering but promotes itself as a community space and also hosts movie premiers, art shows, and live music on its grounds. It is a bouldering-only facility, but very much embracing of the catchphrase on its website, “Our Space is Your Space.” And Wooden Mountain, a 6,000-square-foot bouldering gym in Loveland, Colorado, opened to great acclaim in 2018 after years of being in development—and promptly offered a host of accoutrements ranging from a bouldering league for patrons to “sasquatch tours” in the surrounding mountain landscape.

Other notable bouldering gyms that opened in 2018 were Sacramento’s Boulder Field which is operated by pro-climber Carlo Traversi; Movement made a foray into the heart of Denver with their beautiful bouldering gym; and Chicago-based First Ascent is growing their brand (which now has four facilities) with Block 37; and on the East Coast, Earth Treks and Central Rock opened doors in Baltimore and Boston suburbs respectively.

Big Players Prepare for The Future

Contrasting the smaller and sometimes quirky bouldering gyms were a few openings of notably larger facilities. Earth Treks’ Englewood, Colorado, location opened to great fanfare in 2018 as the largest climbing gym in the United States (and coupled with the announcement that the Earth Treks’ 2017 merger with Planet Granite was being formalized with the 2018 creation of a new parent company, called El Cap Holdings). Earth Treks Englewood features 52,000 square feet of space. Upon its grand opening, much was made of the Englewood location offering approximately 500 various climbing routes across multiple disciplines at any one time.

Other new facilities from established companies already possessing multiple gyms included multiple new Central Rock locations: a 10,000 square foot gym in New York City, as well as a comparably sized gym in Framingham, Massachusetts. In fact, Central Rock has been steadily and quietly increasing its brand presence throughout the Northeast in recent years and has become the second largest gym developer overtaking Touchstone.

While much attention has been given in recent years to gyms opening in major metro markets (think multiple Vertical Endeavors locations in the Twin Cities, or First Ascent locations in Chicago), 2018 also indicated an interesting change. The majority of the gym development happened in small and mid-markets. An illustration of this was the opening of Gad Rock in Gadsden, Alabama—a city that has 35,000 residents (certainly not minuscule, but dwarfed by nearby Birmingham and Chattanooga). Another example would be Gravity Vault in Flemington, New Jersey, which offers 17,000 square feet of climbing in a town that has only 4,600 residents.

Perhaps the most notable illustration of climbing finding success in a small market was the opening of Gnarwall Bouldering Gym in Pfafftown, North Carolina—a town of just 2,000 people.

In fact, throughout 2018, there were only a handful of developers who decided to tackle the high cost of real estate and burdensome bureaucracy of opening gyms in big cities. These included First Ascent opening its Block 37 location in the heart of downtown Chicago, Movement opening its RiNo location in the Denver area, MetroRock opening a gym in Brooklyn, New York, and Tufas Boulder Lounge in Philadelphia, Pennsylvania, among others.

2018 also saw the opening of Armadillo Boulders in San Antonio, Texas. As such, Armadillo Boulders became the first commercial gym in the city that possesses approximately 1.5 million people. And Memphis Rox opened in the bustling city of Memphis, Tennessee with a unique business model: no set climbing fee. “There are no age restrictions and you will not be turned away regardless of your ability to pay,” the gym notes on its website.

The opening of facilities in smaller markets alongside select city developments signals the staying power of the climbing industry, and should be interpreted as a plus for all. It indicates climbing’s ability to thrive and adapt in virtually any sized market.

As with most years, there were some gym closures in 2018. There were five commercial climbing gyms that closed in the US.  Of note is that four of the five facilities were originally opened in the 1990s. Such normal generational attrition is likely not an indicator of any larger trend. However, the industry consistently having a robust annual growth rate inevitably means there has been increased competition in many markets.

History enthusiasts will note that one such closure was Thrillseekers, in Denver. Having been started in 1992, the gym was one of the oldest in Colorado. Owner Kevin Smith retired in March (2018), and held a weeklong sale to get rid of the gym’s equipment.

Another gym that closed for a far different reason was Urban Ascent in Boise, Idaho. The gym had been in operation since 2004, but was purchased by a developer and resided on land that was owned by the city. The gym’s sudden closing was thus the first step in redeveloping the site for affordable housing apartments. “I was told that the gym would remain open for 18 months after the project breaks ground,” wrote Urban Ascent’s manager, Clint Colwell, on Facebook in March, 2018. “This is not true I guess and it saddens me to be the bearer of this message. You all are my friends, and I was hoping we could keep this up for a while longer as we all know how great a community we have here at Urban.”

Another gym that closed in 2018 was Atlanta Rocks, in Georgia—the oldest indoor facility in the city, although the location had changed over the years. The gym closed in response to a major rent increase, which was perhaps partially in response to new condos and other major developments nearby.

The CBJ growth rate and accompanying data is compiled through several different source avenues and is completely original and proprietary to Climbing Business Journal.  We collect data on all new, sold, moved, expanded and closed commercial climbing gyms in the US and Canada. Our database is the only complete listing of commercial climbing gyms with reliable trends going back to 2009.

Community Will Help Sustain Us: Behind the Closures with Andrea Charest