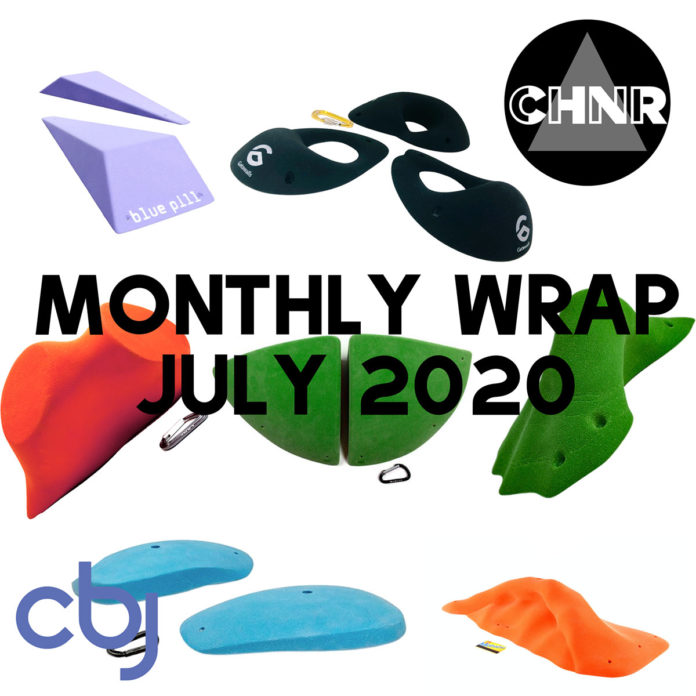 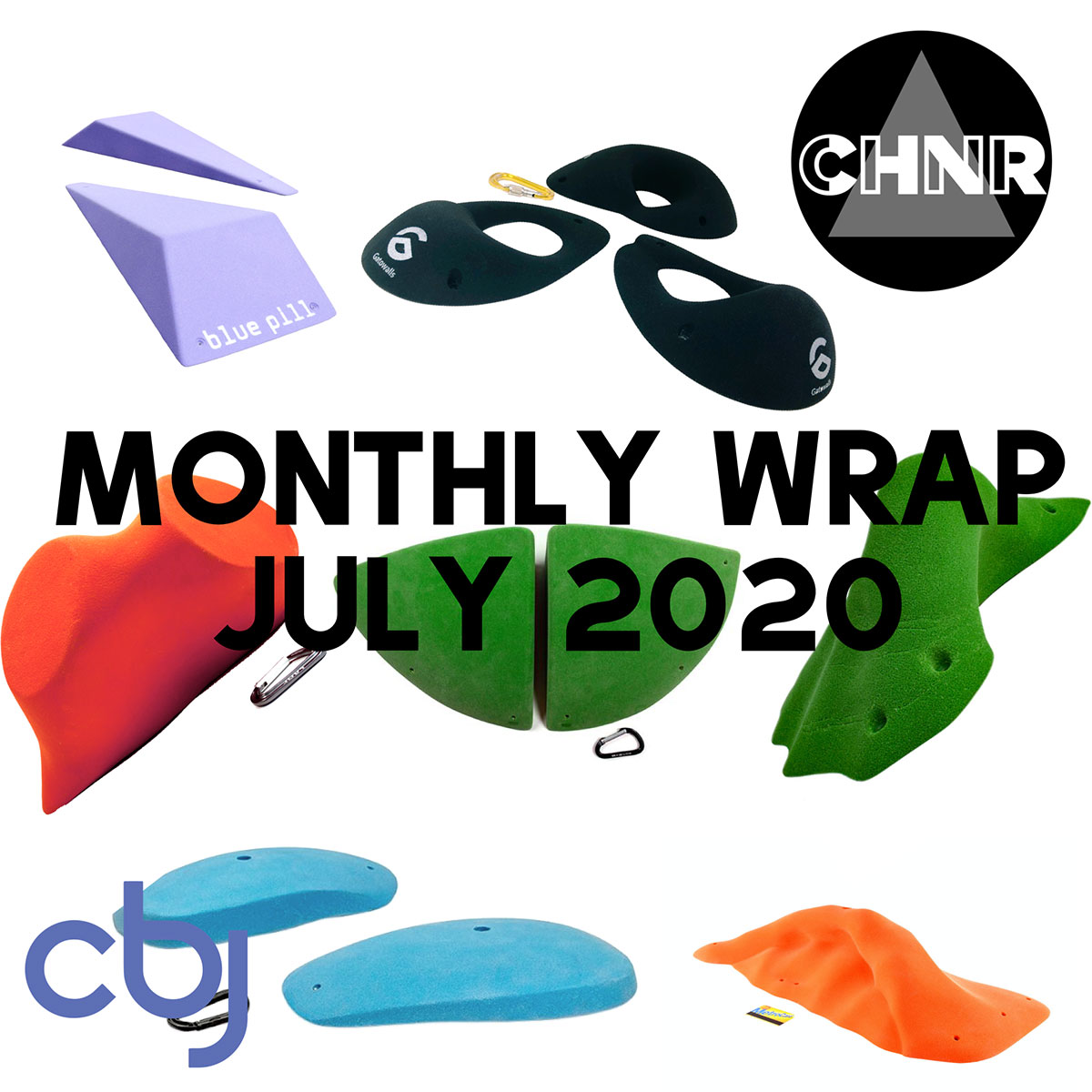 Welcome to the third “monthly wrap” in cooperation with Climbing Hold News Reviews, where we bring you the latest developments in the climbing holds, macros and volumes sector.

As summer goes on, climbing hold brands from around the world continue to persevere through this period and release new shapes for the gyms able to reopen their doors and homewallers alike. Climbing continues, and new grips of all sizes have been something to look forward to. We highlight some of the latest ones in July from nearly a dozen brands below.

Be sure to check out all the hold news this summer since May and June, as well as the new training equipment of late. 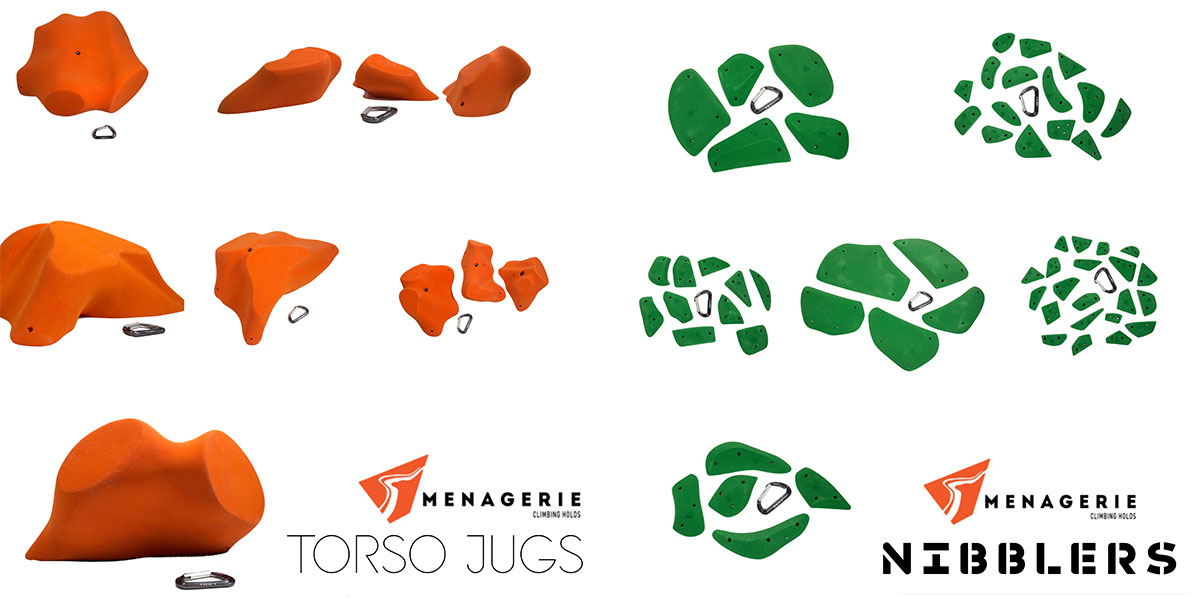 Menagerie Climbing has brand new Torso Jug additions and Nibblers poured by Composite-X / Dannomond being released this month. The Torso Jugs are a series of stalactite-type, high-profile jugs. These holds also range from Extra Small to Massive 7XL sizes. The Nibblers are a series of screw-on, low-profile plates and jibs designed for slab and volume-based climbing, ranging from Extra Small to 2XL. They vary from rounded and angular edges to slopey surfaces, and some with a smooth transition between the two styles. https://menagerieclimb.com 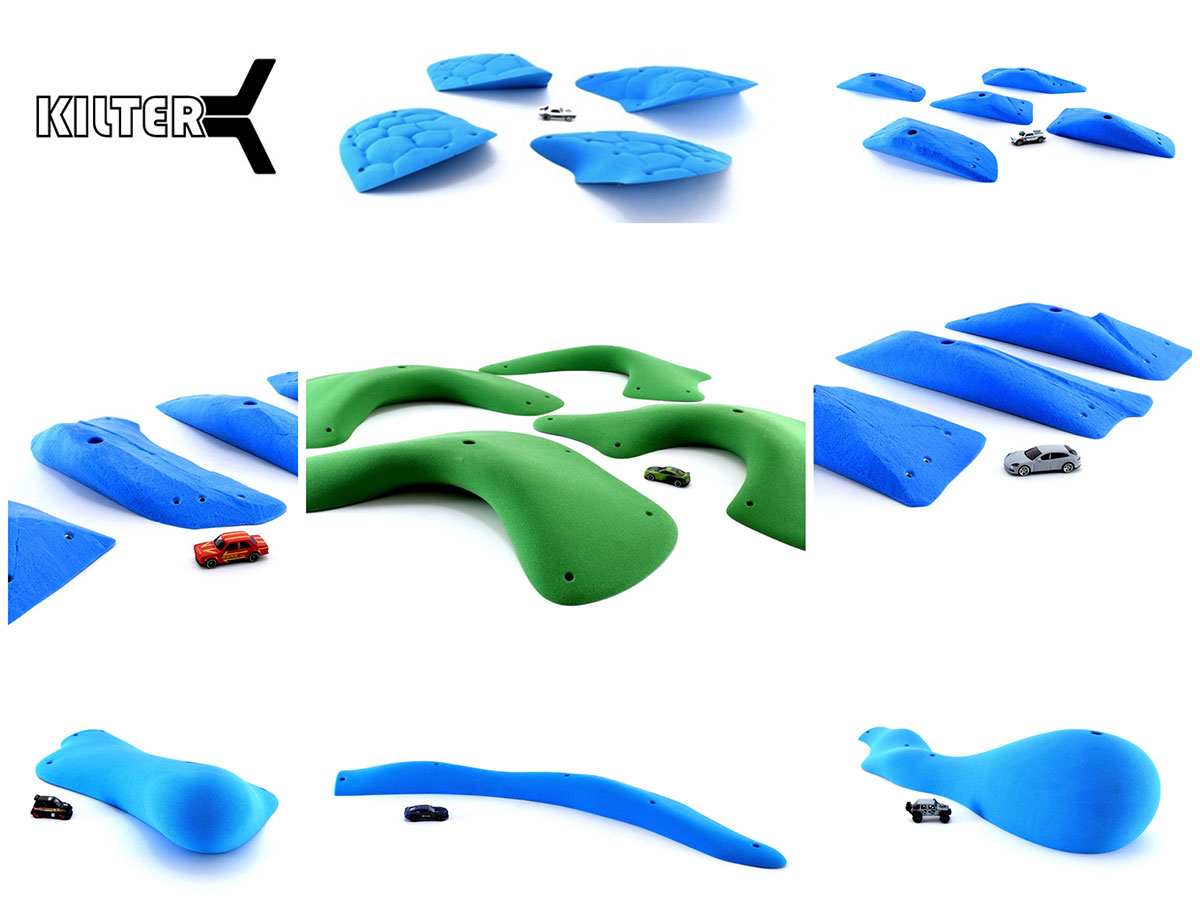 Winner of multiple Grip List 2020 awards, Kilter released a total of 8 new sets this month featuring the following: The Font Corner Stacks – 30 degrees (shown top middle), which are screw-on holds designed to fit into specific angles between volumes and angle changes on some walls. Made out of Dannomond polyurethane, they flex to adjust to subtle angles in either direction. The Granite XL, 2XL Complex Blocky Incuts (top right, middle left, middle right) feature rounded angular lips which work without or with blockers―meaning the holds can go from jugs to intricate rounded edges. The Smooth Tufa System also received expansions, with several new end pieces featuring the Rounded Horn Jug (bottom left) and Rounded Ball Sloper (bottom right), as well as a Slopey Directional Hueco (bottom middle), increasing the sets available to 51 in total for this line. https://settercloset.com 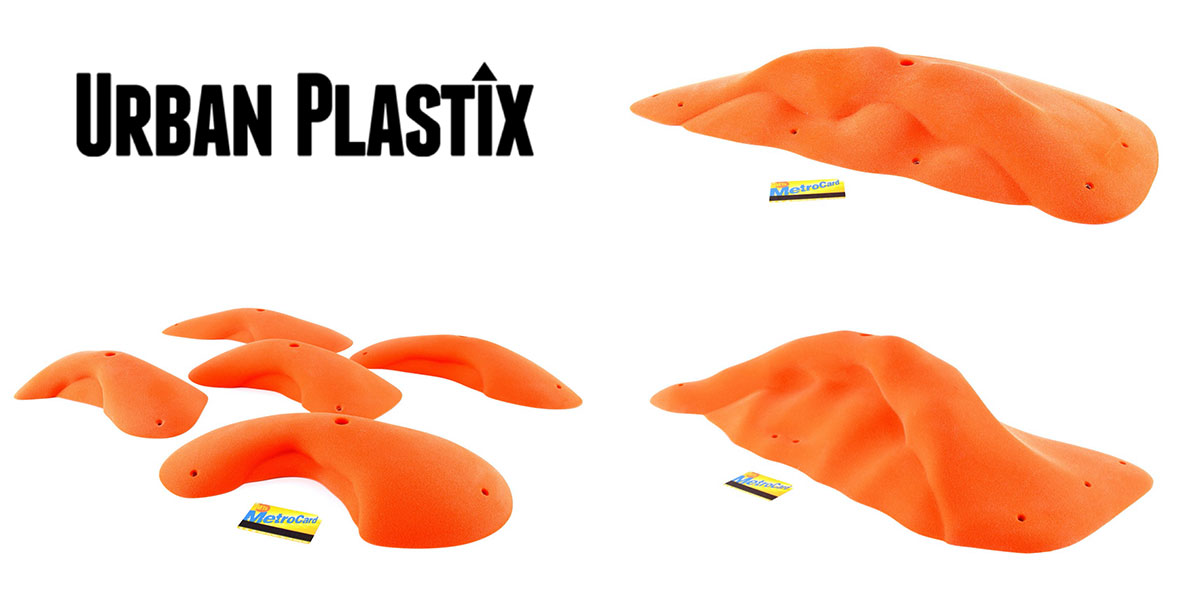 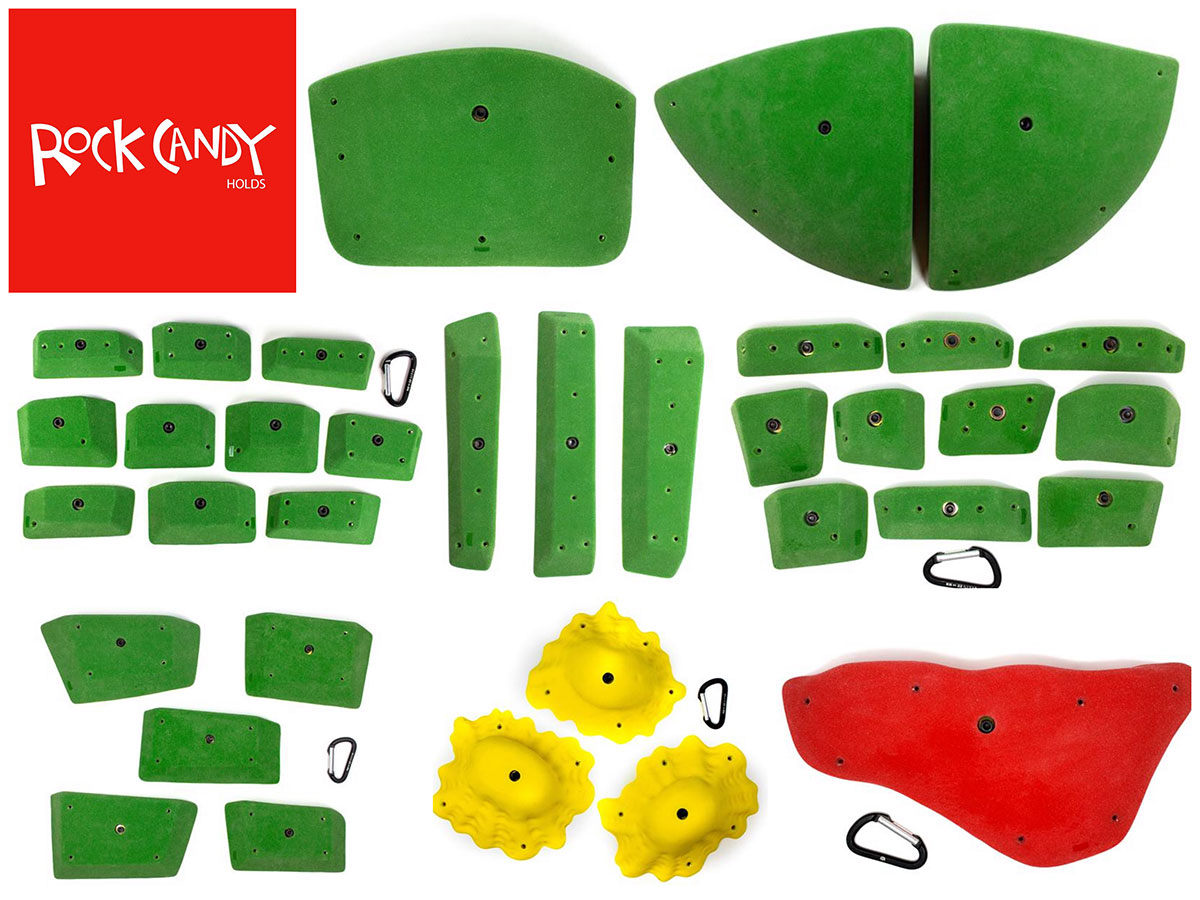 Rock Candy Holds based out of Akron, Ohio, released a new expansion to their Diatoms line which now includes the Diatoms slopers and incuts (shown in green)―adding variation to a series of edges and sloping edges. Within the nine new sets that were released, the Grip List 2020 company also incorporated larger colossal and feature shapes as well as rails. Rock Candy Holds also released two smaller expansions to their Fillets line featuring a 3XL edge (shown in red) which pairs with the other holds in the series, as well as the 2XL Toadstool slopers (shown in yellow). https://rockcandyholds.com 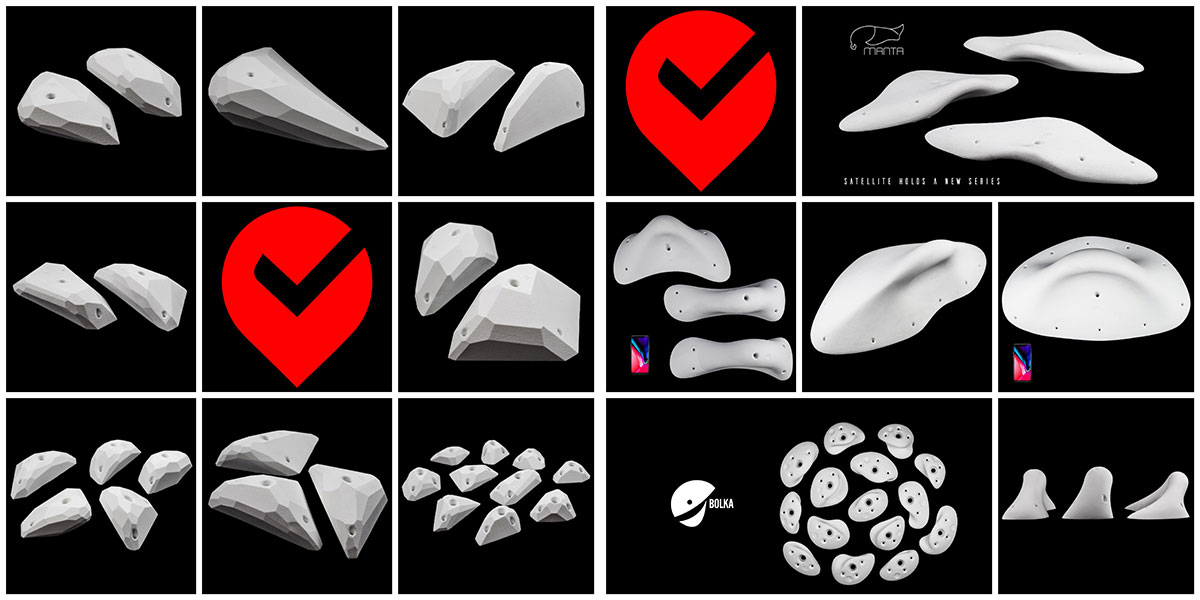 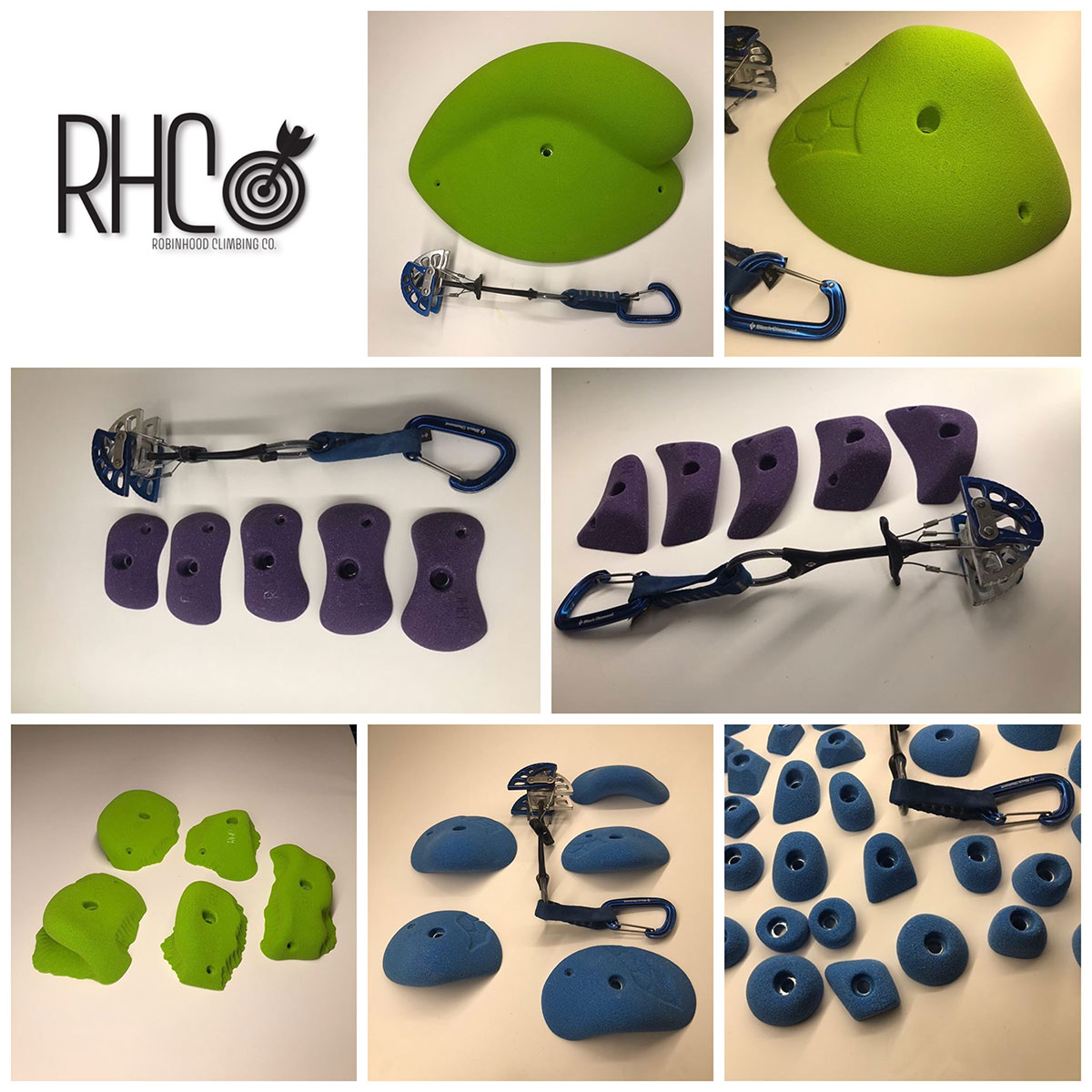 Robinhood Climbing Company is a newer company based out of Ohio that released 11 new sets. The Waves (shown in lime green) are a series of plate-like, ridged edges which feature 5 new large shapes by Heywood BD, formerly of Pur Climbing. Meanwhile shaper Andy Nelson released expansions to his existing series with L, XL (shown in blue) and 2XL Webs and Feature Wimple shapes (shown in lime green). Nelson also released the beginning of two new series―the Small and Medium bowtie crimps (shown in purple), Foundation incuts, and a brand new collection of foot chips (both shown in blue). https://robinhoodclimbing.com 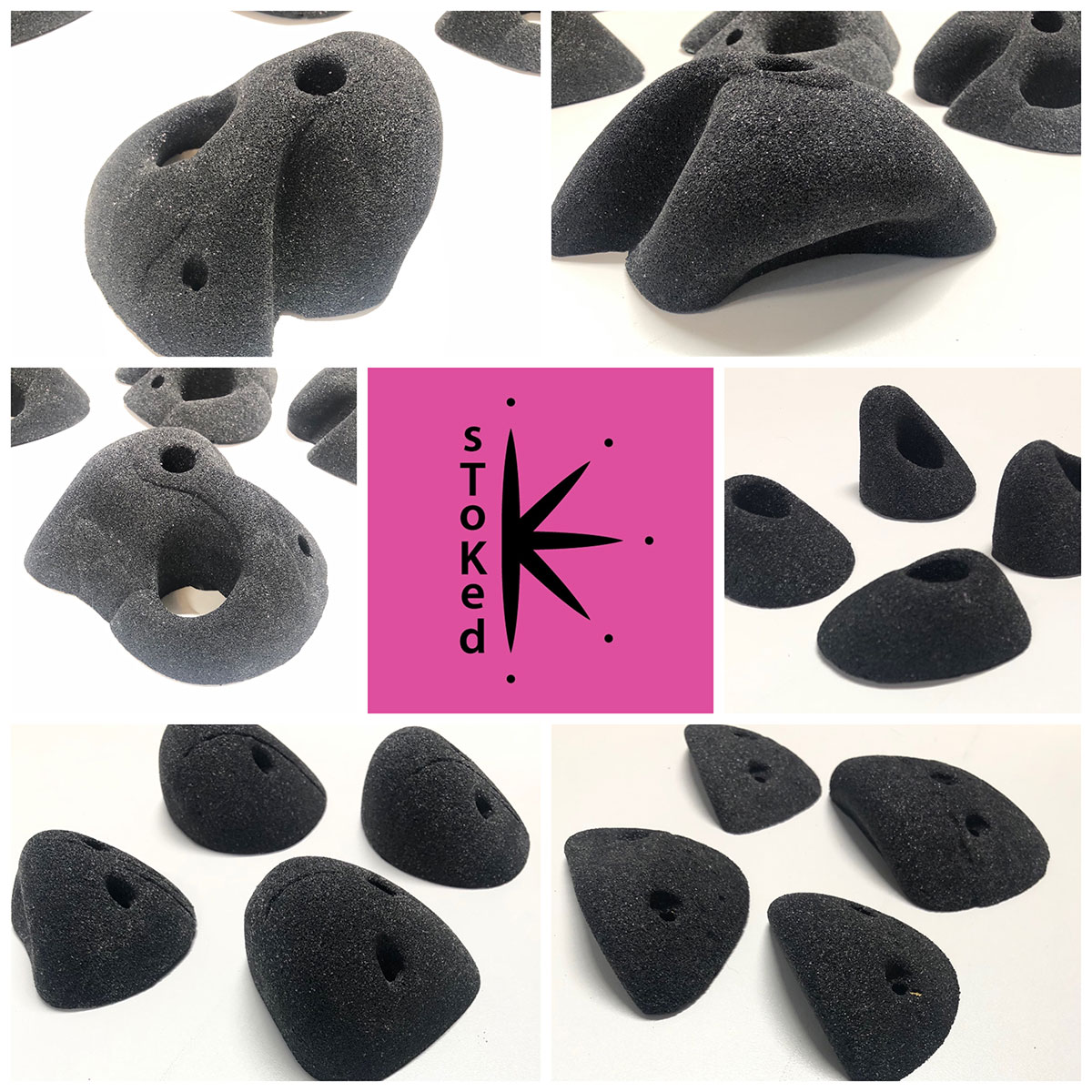 Winner of the new Favorite Homewall Volumes award this year in the Grip List 2020, Stoked Climbing is getting in the hold game with early shapes being released by Kegan Minock. The first offering is a series of multi-use climbing grips with different grabbable surfaces depending on what difficulty the user desires. They could almost be thought of as training equipment, since each features a jug, an edge and a pocket. There are 5 medium shapes available with the L and XL sizes coming soon. Stoked Climbing also released the Kaiteki series (which means “comfortable” in Japanese), a series of 40 holds ranging from XS to M sizes of crimps, jugs and slopers (also shaped by Kegan Minock). https://stokedclimbingvolumes.com

Bluepill Climbing is releasing a set of 6 Diamonds and 6 Broken Diamonds which are wooden volumes that have the ability to connect to one another or be used separately. Their namesake comes from different multi-plane angles being present on the same volume to create the diamond-like shape. Their creation has been made specifically with screw-on holds in mind to adjust difficulty of climbing as needed. Bluepill Climbing macros and volumes are distributed exclusively by Blocz Distribution in the United States. https://bluepill-climbing.com 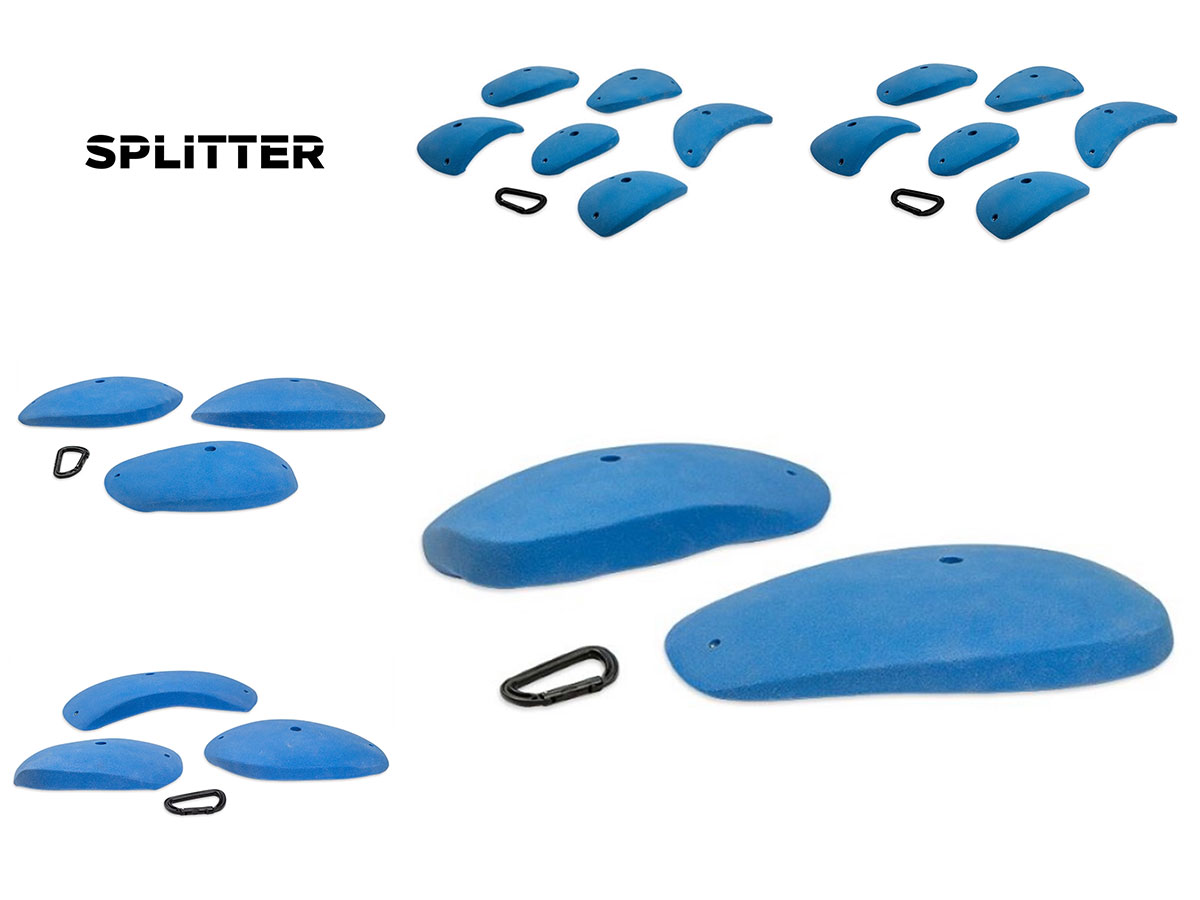 Splitter based out of Salt Lake City, Utah, is known for their wooden Crack Trainer volumes, but recently expanded into the area of climbing holds. Their latest offering is called the Flakes, a series of large flake-like holds currently ranging from M to XL. They are shaped by Brandon Wilde and being poured out of Proxy / Vertical Solutions. https://splitterclimbing.com 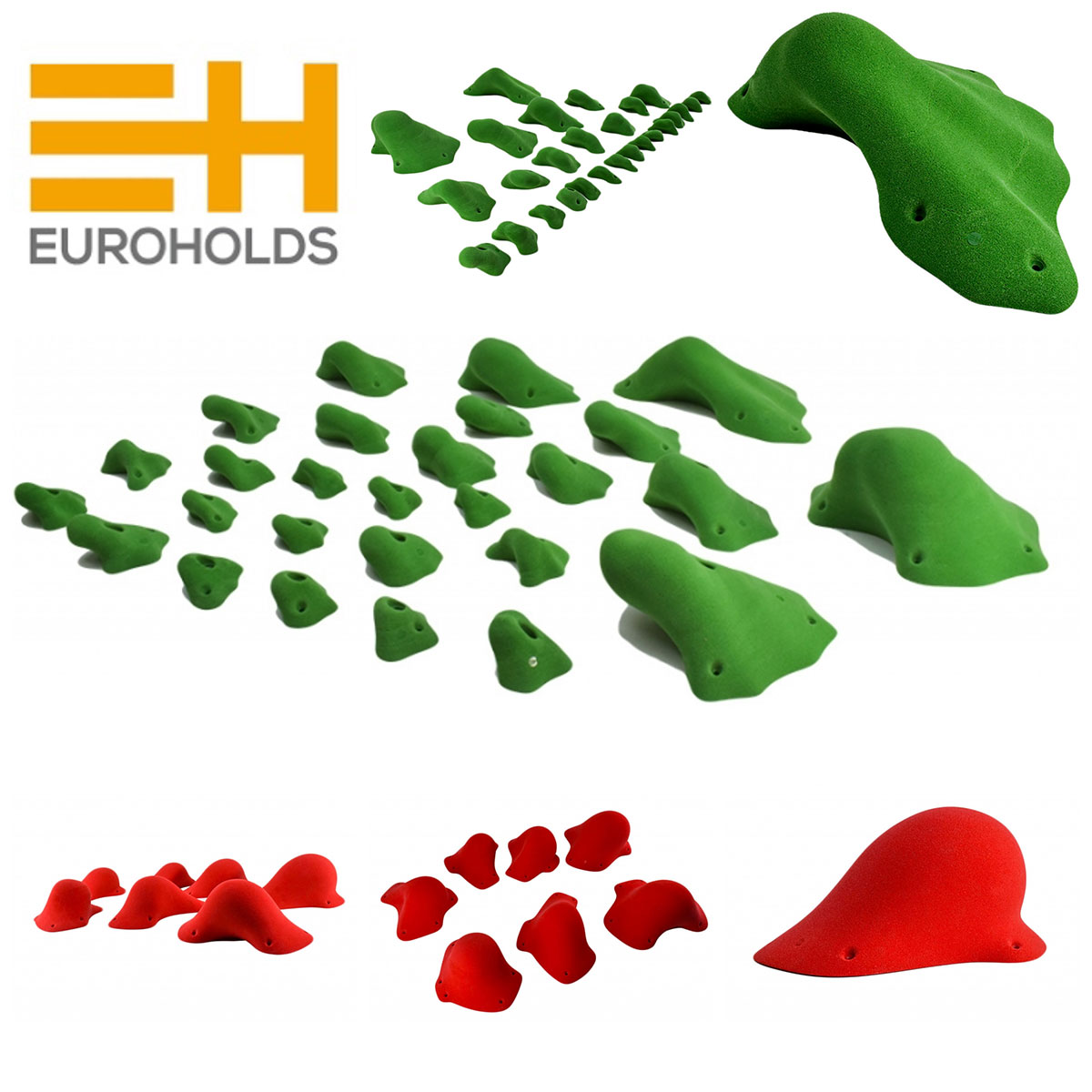 EuroHolds is producing a large catalogue of wooden holds and training tools, as well as a fiberglass line of macros with a new technology called Fibertech. Euroholds’ latest family of holds is called The Phantoms (shown in green), shaped by Sergei Timchenko. This series features 27 positive holds with a limestone texture. EuroHolds also released The Seven Dwarfs (in red), which feature big, rounded positive screw-on slopers (also shaped by Sergei Timchenko). https://euroholds.com 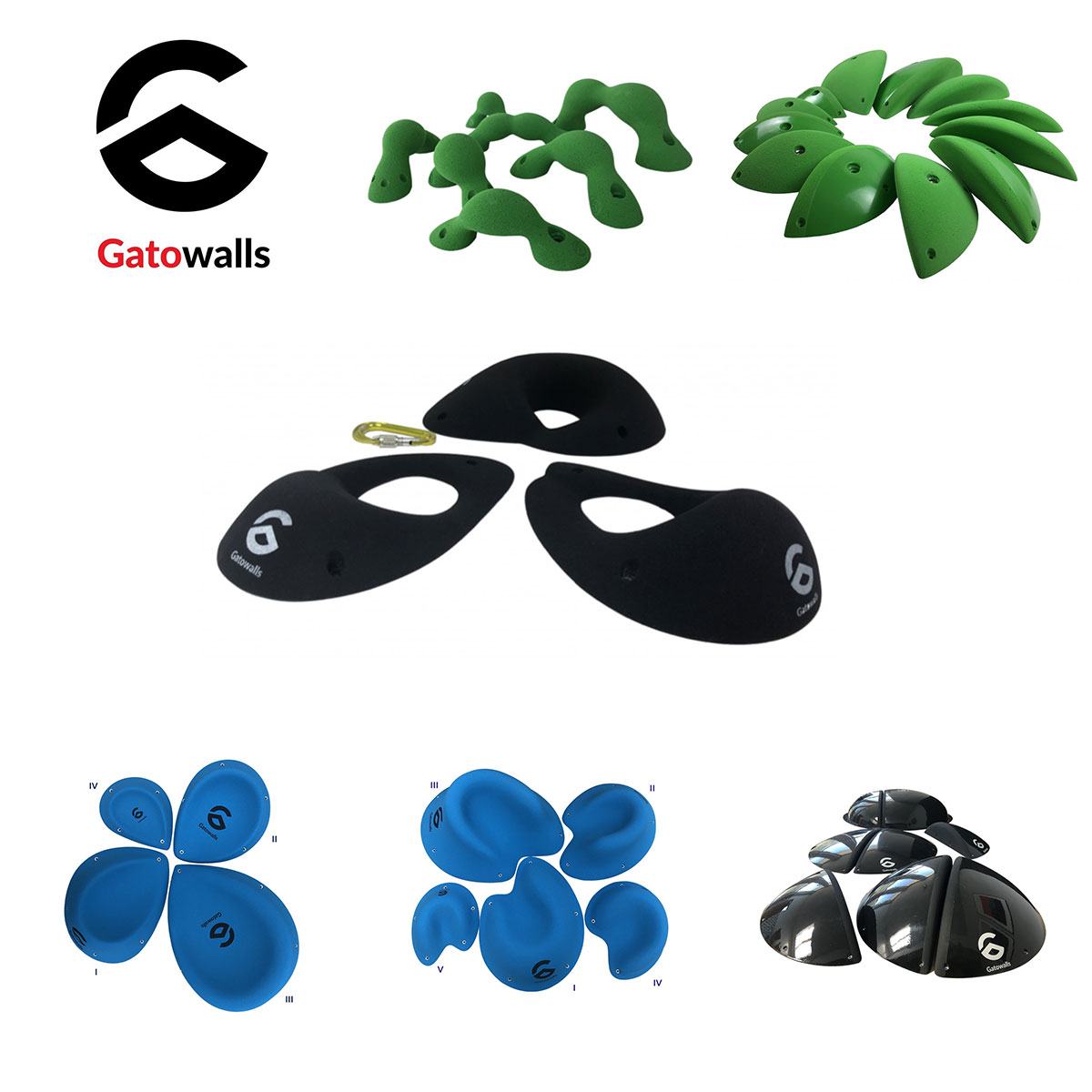 Gatowalls is a climbing hold / macro / volume / training equipment and climbing wall producer out of Poland. Recently the company released the Moustache series (shown in green), featuring handle-bar size bulbous holds of all sizes. Gatowalls also released the Semi hold series (also shown in green), with both dual-texture and full-texture edges of varying incuts. In the macro domain the company released several new lines: The Drops (shown in blue), which feature large, scoop-like plates; The Buckets (also shown in blue), other large scoops; The Nests (shown in black), a series of 9 screw-on variably sloping huecos; and the Semis (also shown in black), which are half-sphere-like holds now available in dual-texture and full-texture. https://gatowalls.com

New Brands, Shapes Launch During the Pandemic: CHNR May Wrap