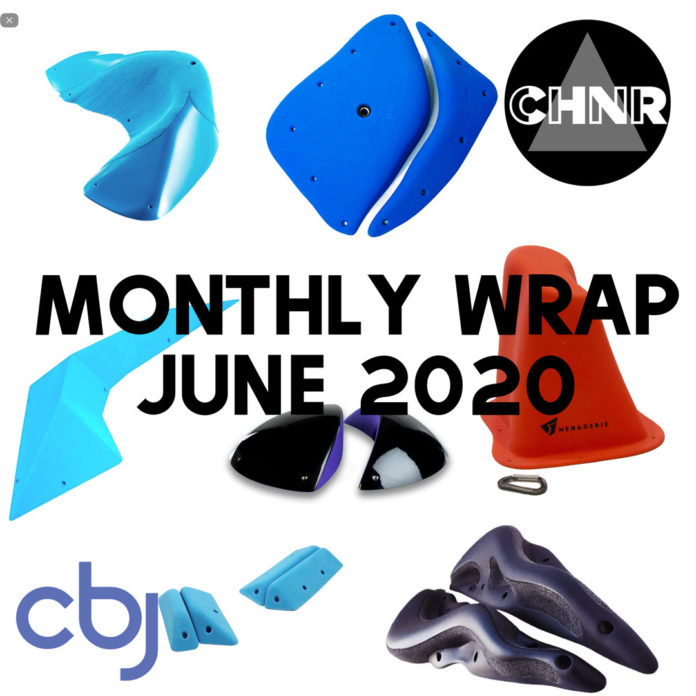 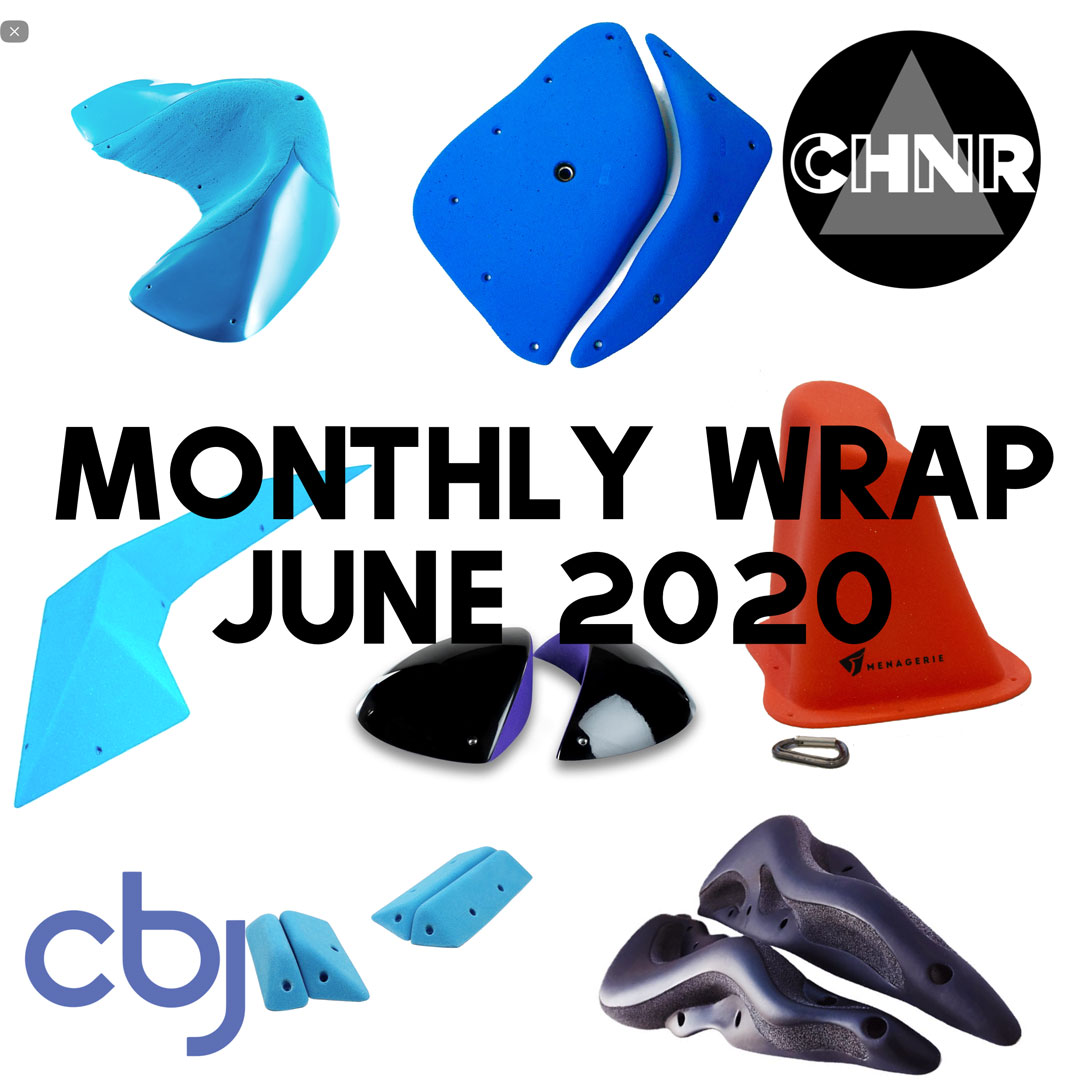 Welcome to the second “monthly wrap” in cooperation with Climbing Hold News Reviews where we will bring you the latest in climbing holds, macros and volumes.  We hope you love this as much as we do!

It’s been a challenging month here in America with social change and important issues occurring everywhere.  As Covid-19 appears to be here to stay, commercial climbing gyms grapple with adopting protective standards and coming up with ways to keep climbers safe.  Nevertheless, climbers are returning to the gyms in droves with even a few new gyms poised to open up with brand news holds, macros and volumes.  Here’s hoping we can continue this forward momentum in gyms and the return of an increase in new releases.  There’s some hot stuff in the pipeline and can’t wait to keep sharing it with you. 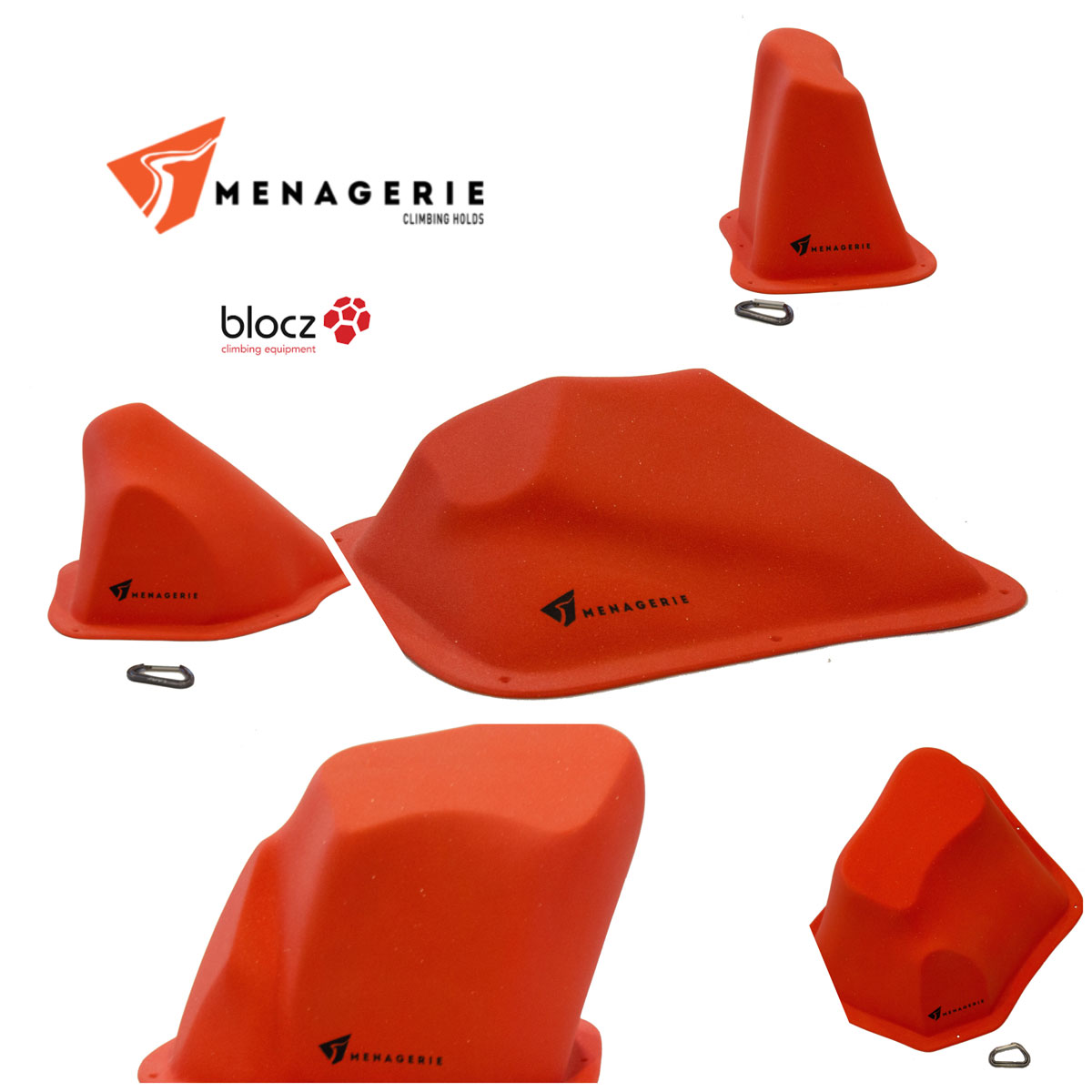 Menagerie Climbing’s website was updated this month with a preview of things to come including their sister company Formik Climbing as well as the release of the German-made Blocz Torso and Voidbringer fiberglass macros.  The Torso macros are high-profile stalactites, while the Voidbringer macros are more subtle, sloping and bulbous. menagerieclimb.com 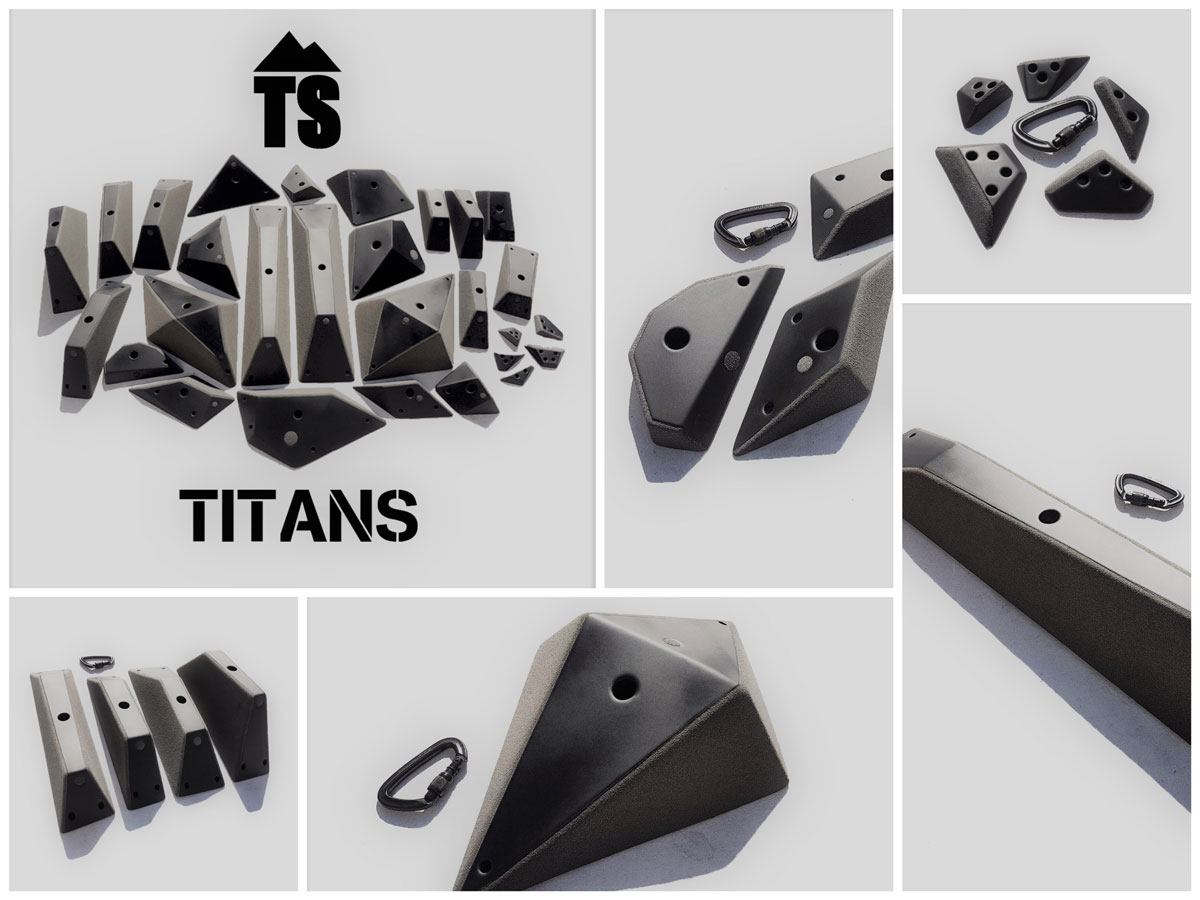 Thrillseeker has released the Titans which are dual texture competition holds shaped by Dario Stefanou of Ibex.  They are a natural progression from the debut Obsidian line which are also dual texture.  These dual texture holds feature angular pinches, edges and are a combination of small to titan sized bolt on and screw on holds.  They are poured by Composite-X in Dannomond polyurethane and distributed by Mark Bradley through Compass Climbing in the U.S. and Canada. thrillseekerholds.com 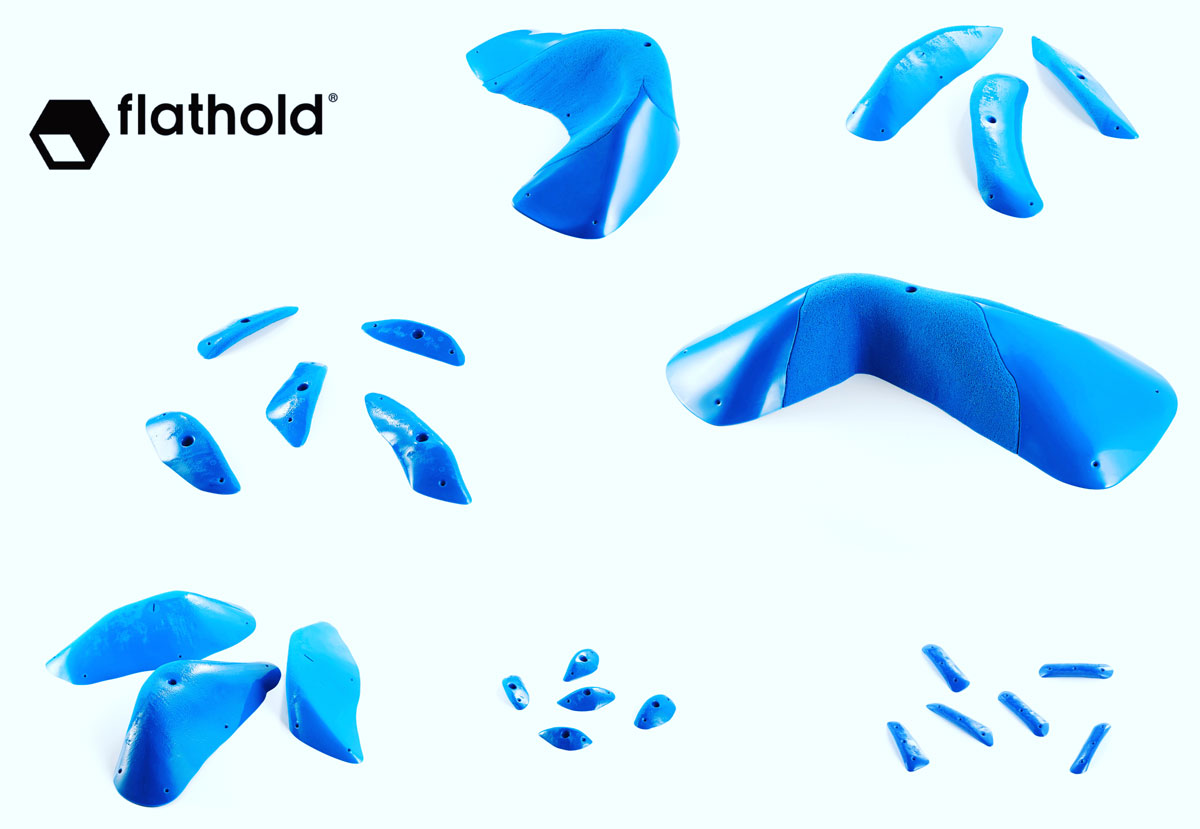 Flathold has officially released their new unique Lucha Libre line which is a dual texture line representing “holds with a thousand masks.”  This was the brainchild of shaper Manuel Hassler in pursuing new expressions of dual texture after collaborating in 2018 with Laurent Laporte of Cheeta Holds.  The result is a combination of seemingly simple shapes with texture that will keep you paying attention.  Flathold has also released the Golden Leaves and Borderline macros and describes them respectively as “the duality between two shapers” which has created half egg shapes and “simple and fundamentally functional” ledges respectively.  Check out the newly redesigned website to see all the shapes. flathold.com 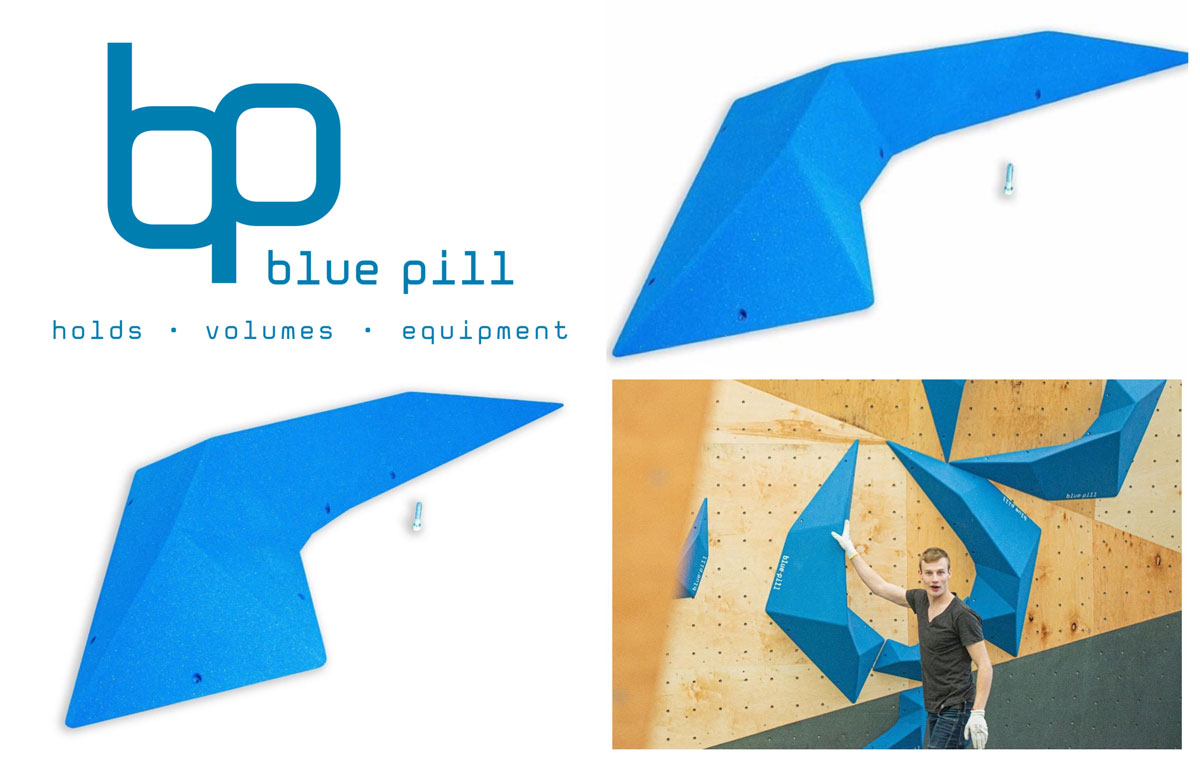 Bluepill Climbing is releasing a set of 8 huge wooden multi-plane volumes which have a left and right mirror image of one another.  They are named the Good Wings and the Bad Wings and their namesake comes from the Good set having more positive angles and the Bad set less positive angles for grabbing.  Bluepill Climbing macros and volumes are distributed exclusively by Blocz Distribution in the U.S.  bluepill-climbing.com 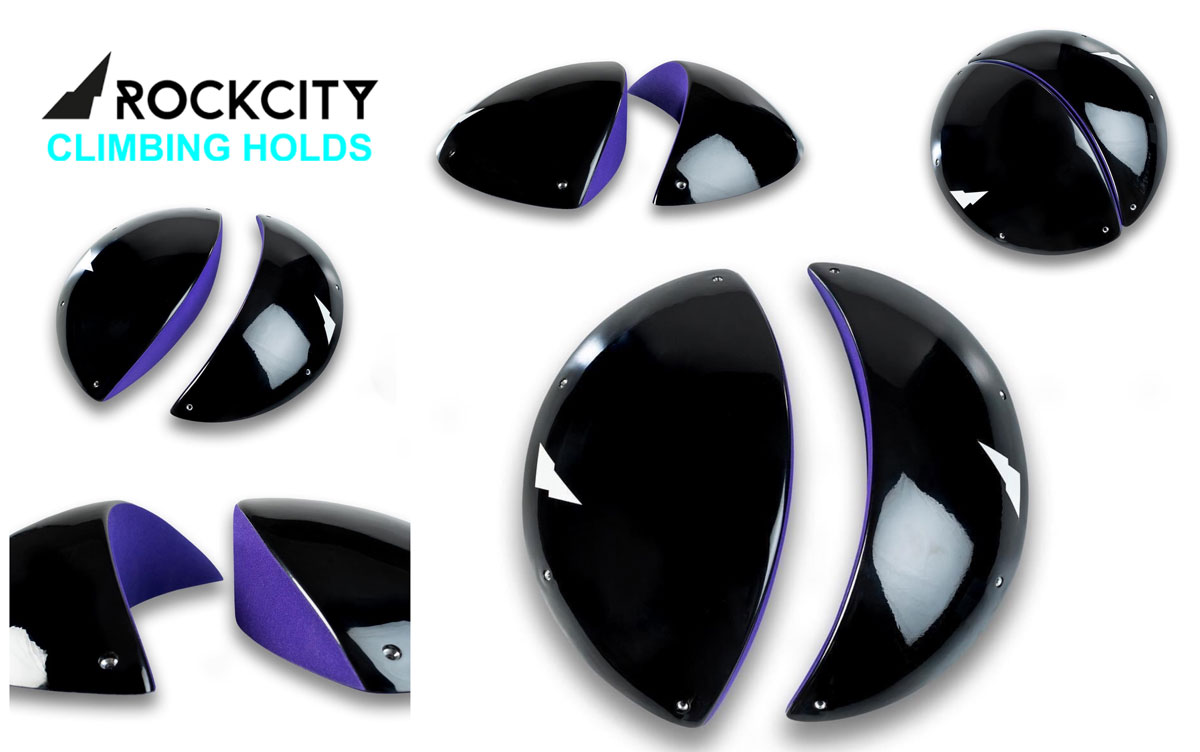 Rock City is based out of the UK but has recently begun distribution through Blocz in the U.S.  Rock City is also an official supplier of climbing holds, macros and volumes for IFSC Climbing as well as the postponed Tokyo Olympics.  Recently they have announced the Basic series which include the Basic Edge Pairs shown above.  These are holds which can be used to block or create seams with shiny dual texture on the outside surface. rockcity.co.uk/climbing-holds 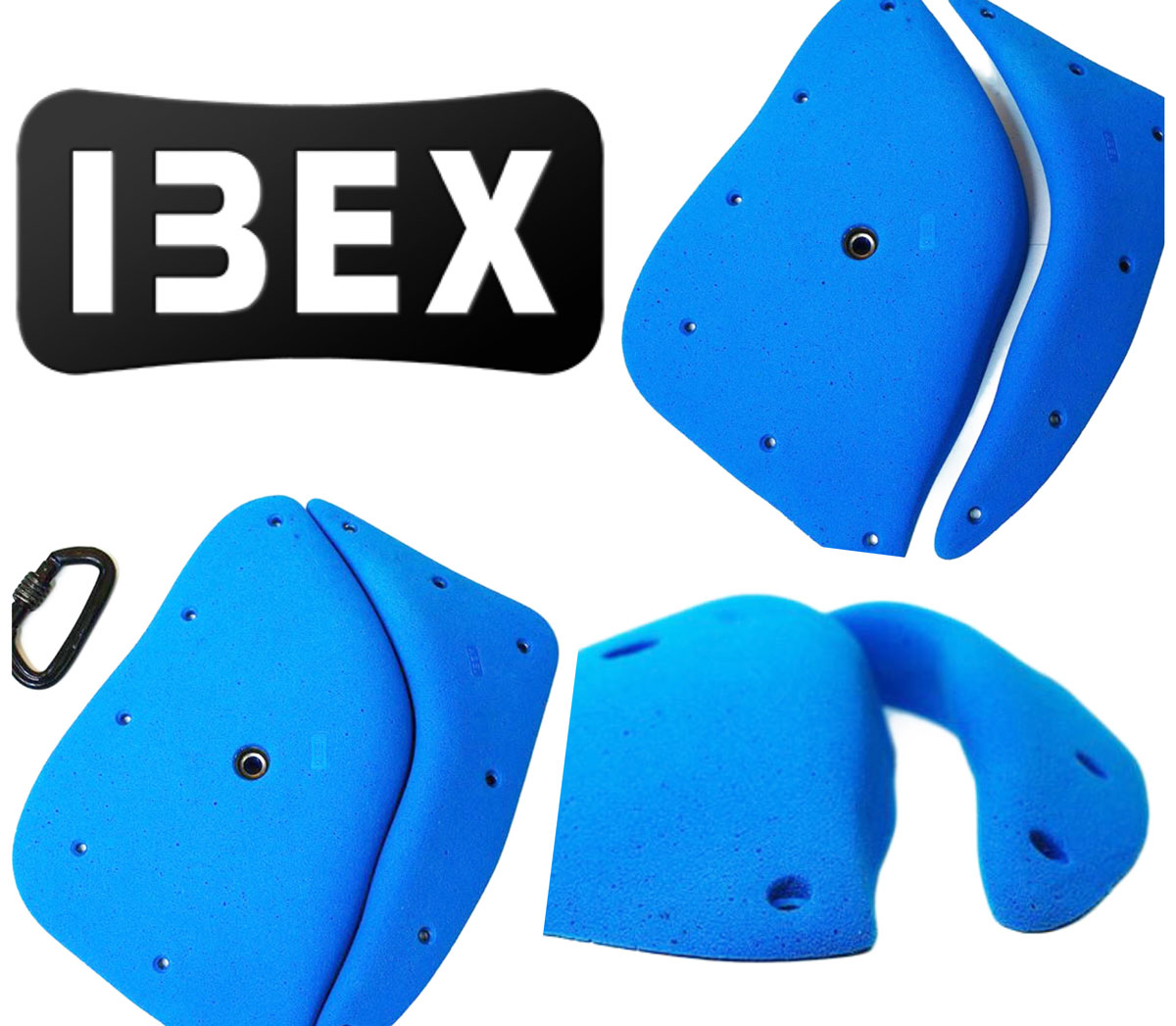 Ibex has released several sets of new Composite-X polyurethane crack-like holds which are expansions of their new Alpha range shaped by Dario Stefanou.  The Alpha Crack Positive is a set of 4 screw-on jugs and the Alpha Crack Negative is a series of 4 puzzle-piece bolt-on blockers, and they are designed to fit together.  Ibex Climbing Holds is distributed Mark Bradley through Compass Climbing in the U.S. and Canada. ibexholds.com 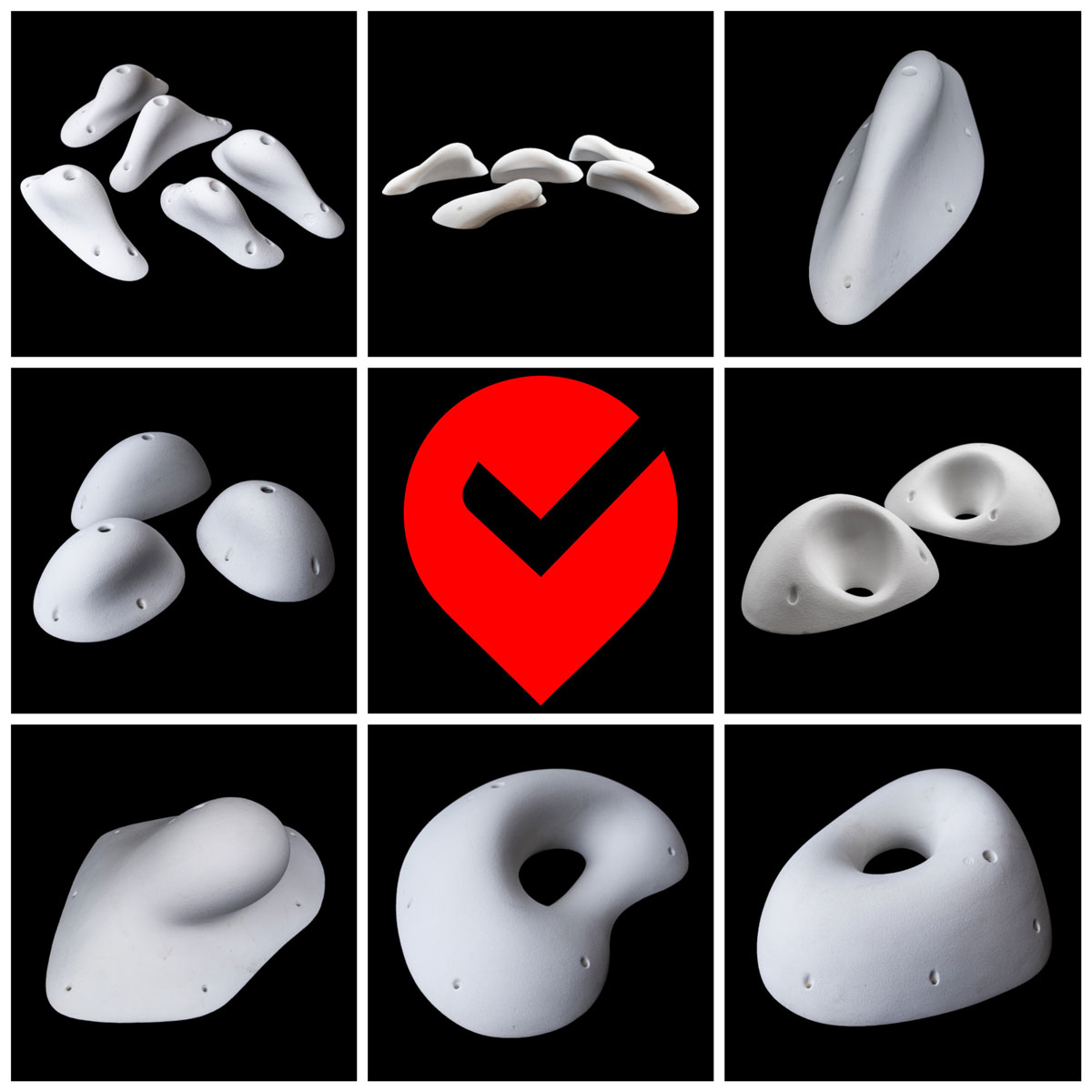 Satellite, based out of Japan, recently confirmed North American distribution by Enrico Baistrocchi’s new Solostile Climbing Lab.  They have just released an expansion to the Toron line which features jugs, pinches, dishes, slopers and huecos. satelliteclimbing.com 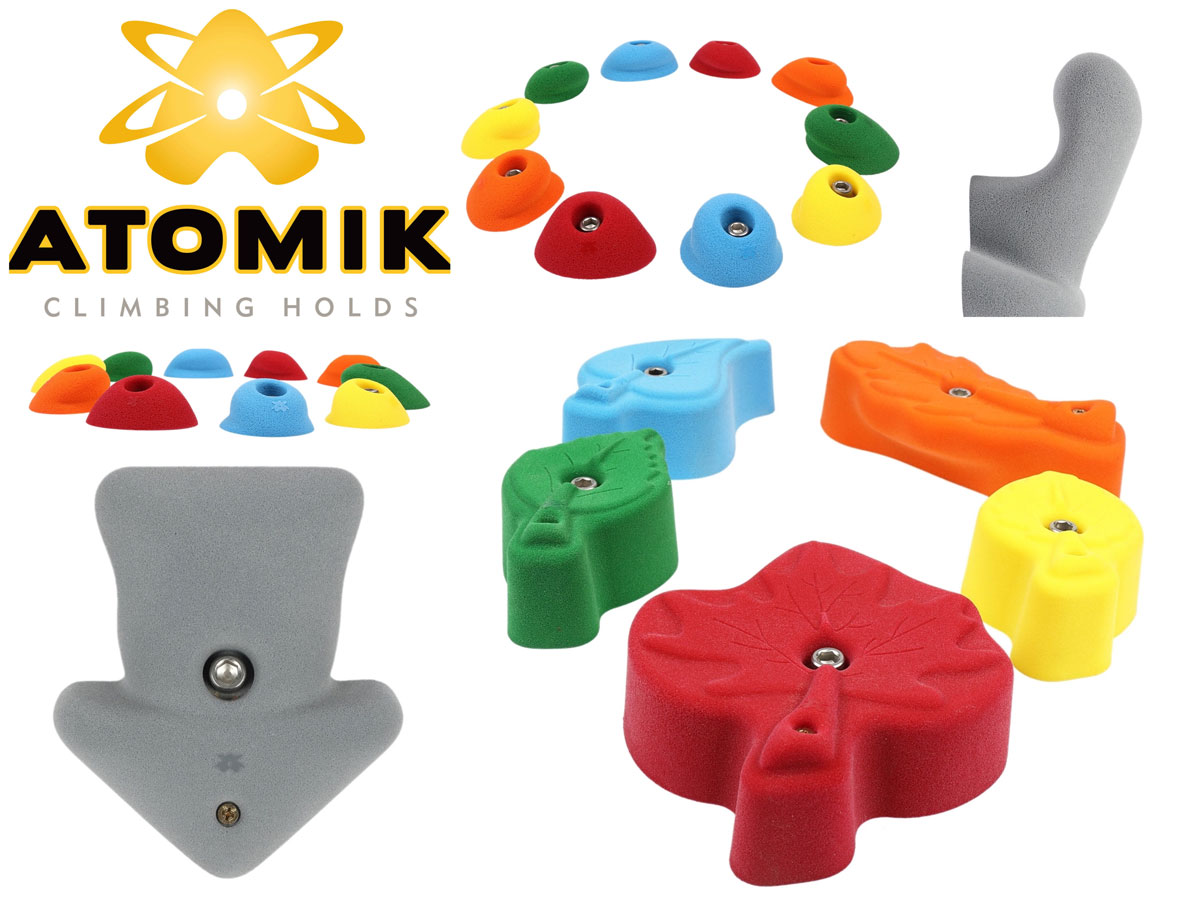 Atomik recently released the individual, 3-pack or 5-pack Leaves which are jugs designed for kid and feature the following leaves – Maple, Oak, Poplar, Birch and Aspen.  They also released the 10-pack Rounders, which are rounded crimps, as well as an arrow-shaped down climb jug. atomikclimbingholds.com 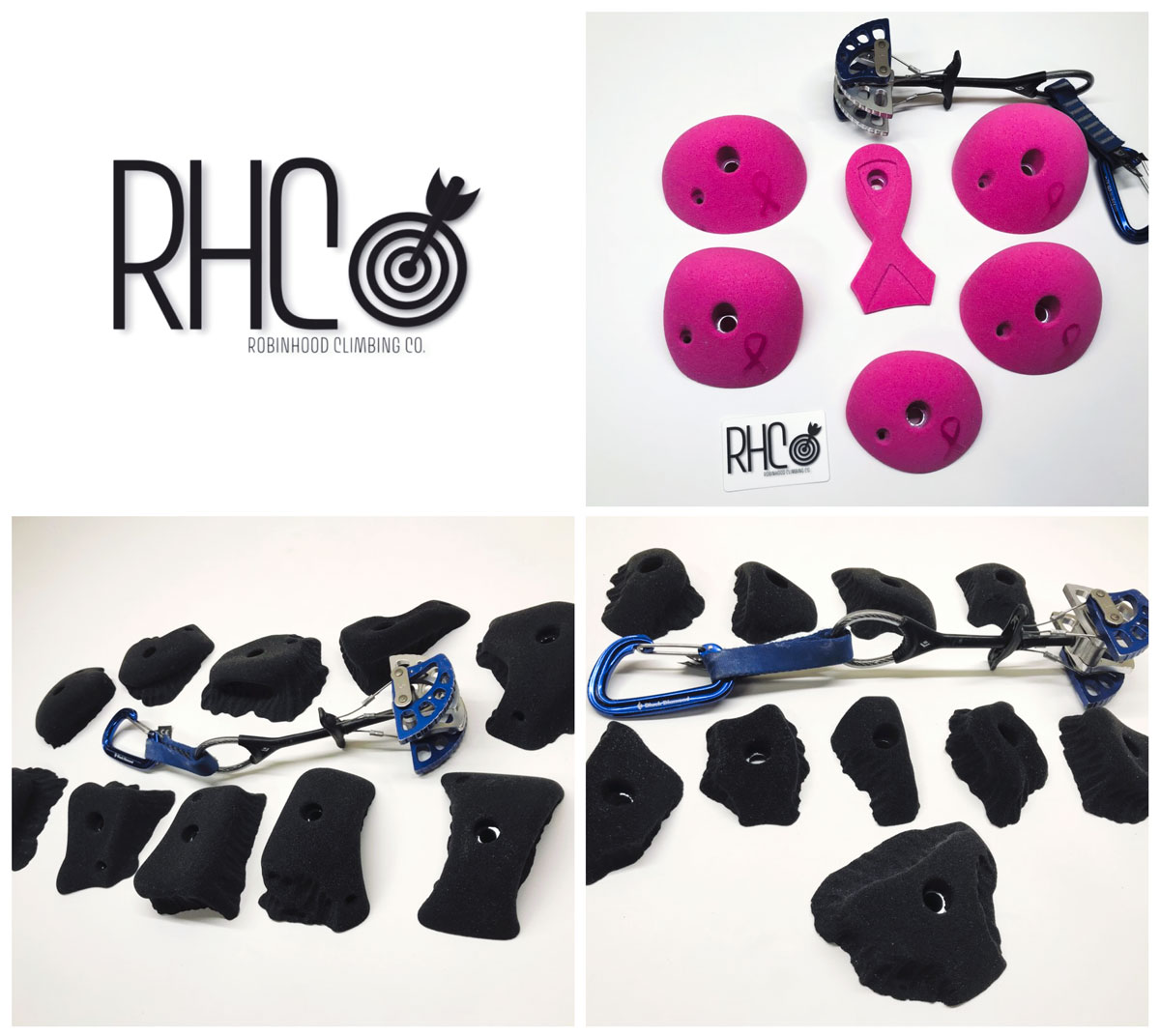 Robinhood is a newer company based out of Ohio which has released 3 new sets.  The Waves (shown in black) are a series of plate-like positive ridged edges which feature 10 small and 10 medium size shapes by Heywood BD (formerly of Pur Climbing).  Jugs for Jugs is a set of 5 varied round jugs and a ribbon hold which were shaped by Andy Nelson, owner of Method Grips.  The profits of this set are will be donated initially to a family in need and then after 6 months to the Susan G. Komen foundation. robinhoodclimbing.com 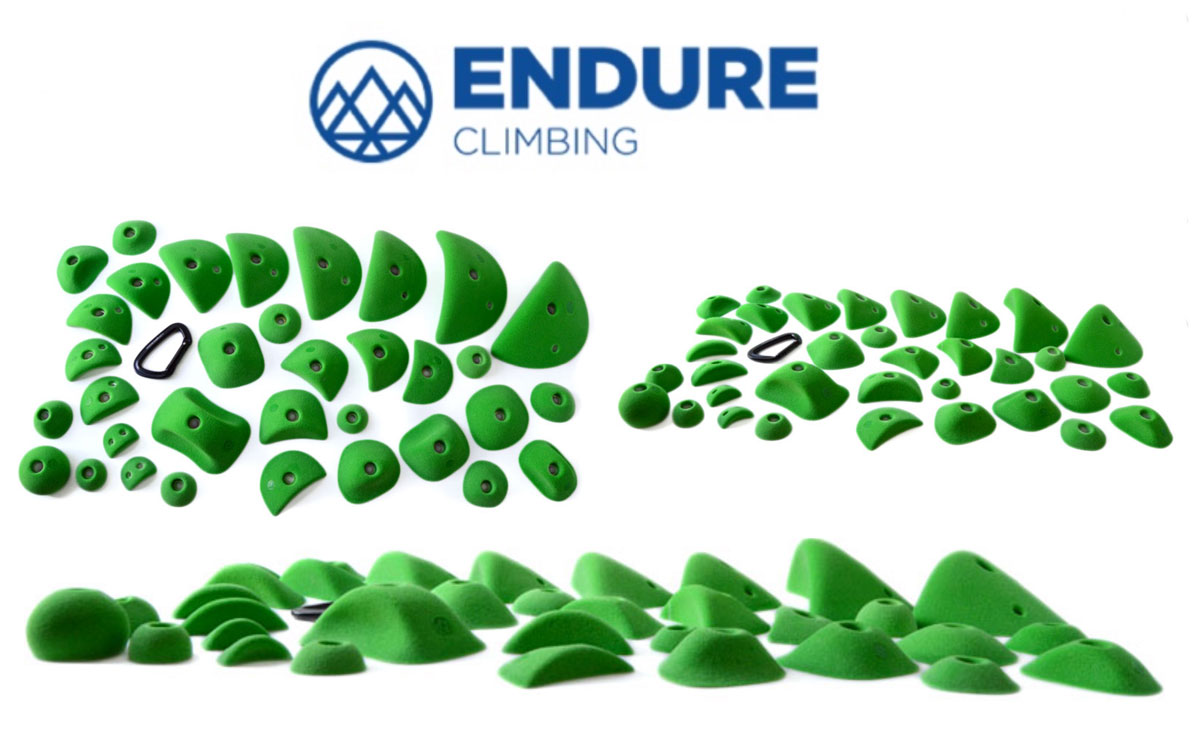 Endure, a small batch hold company based out of Richmond, VA, has released an expansion to the Meddler series, bringing the line to 32 holds.  The series now includes new jugs and edges shaped by Stephen Chafee. climbendure.com 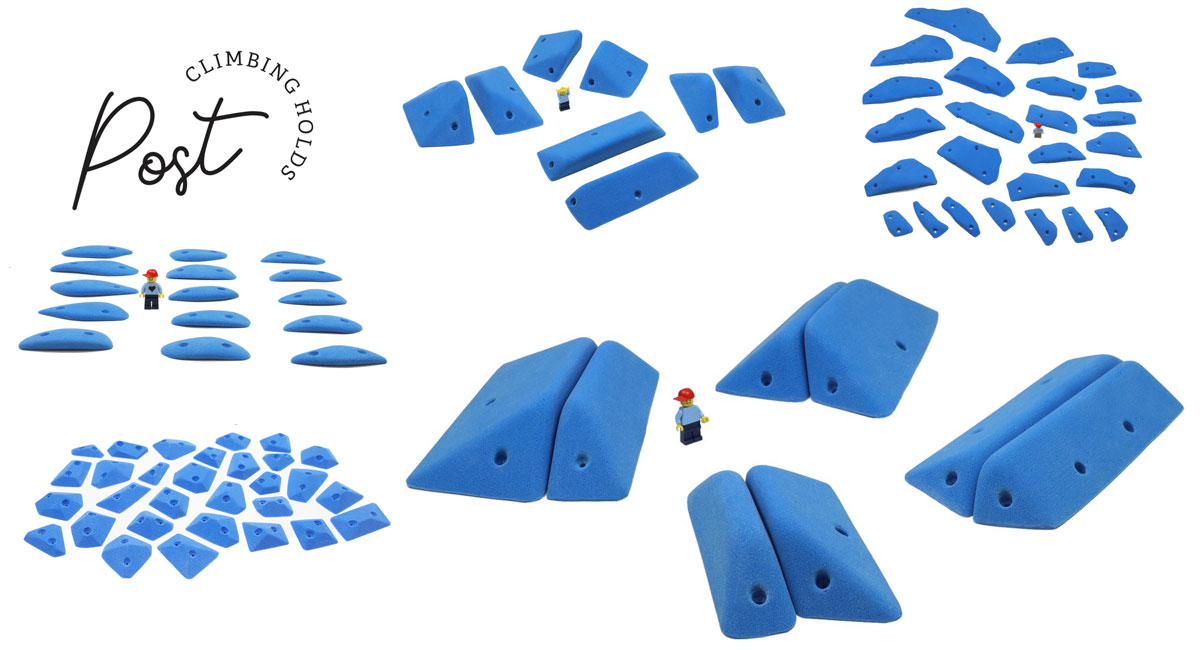 Holdz is a UK-based company that has been around for 20 years and are shaped by Steve Goodair. They are releasing 300 new shapes poured by Composite-X in Dannomond. holdz.co.uk 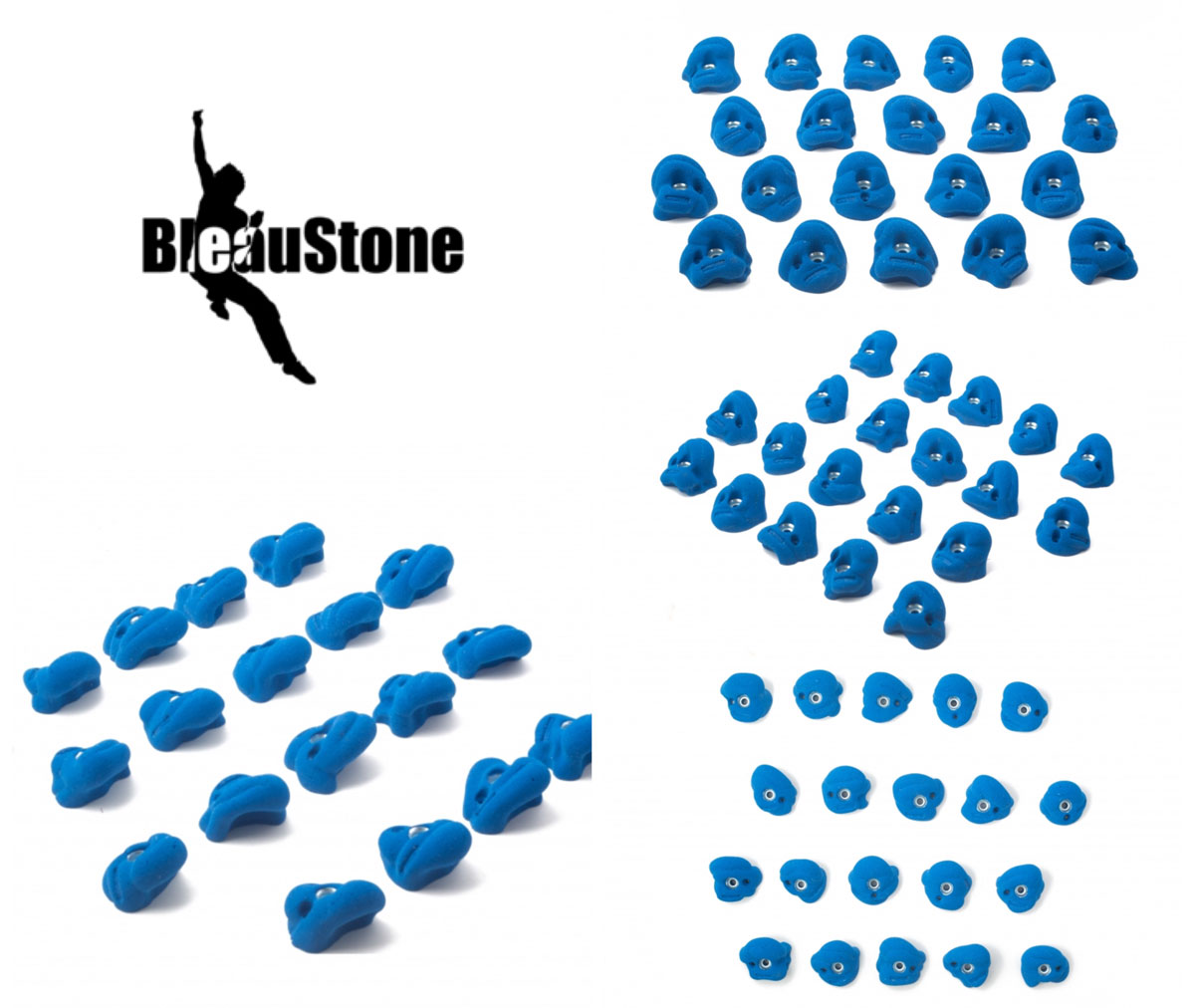 Bleaustone recently redesigned their Fontainebleau Nano Jugs to fit in the hand more comfortably and also include setscrew holes. climb-holds.com 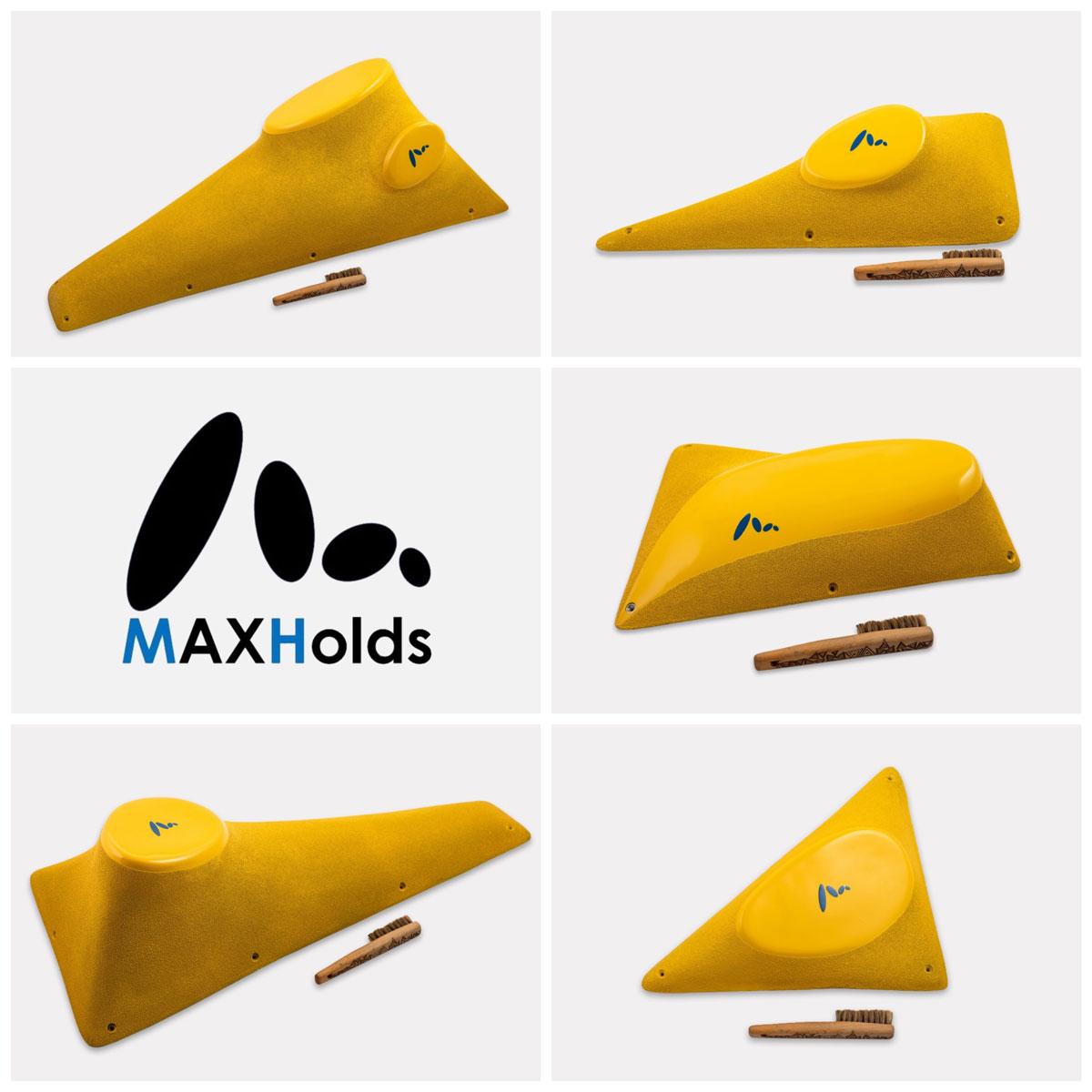 Check out climbingholdnewsreviews.com to check out the Weekly Wraps for even more updates and new releases on a weekly basis. You can also read last month’s May Wrap here.

The Project: The Hardest Route Set