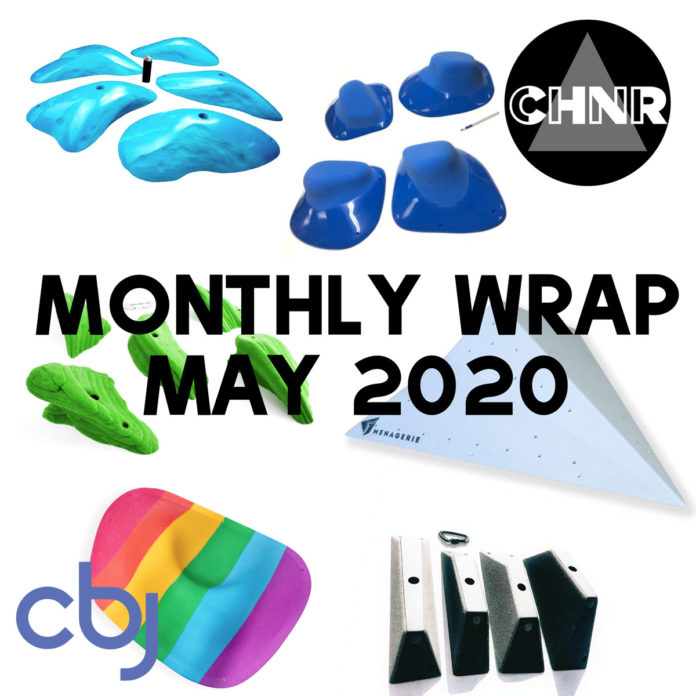 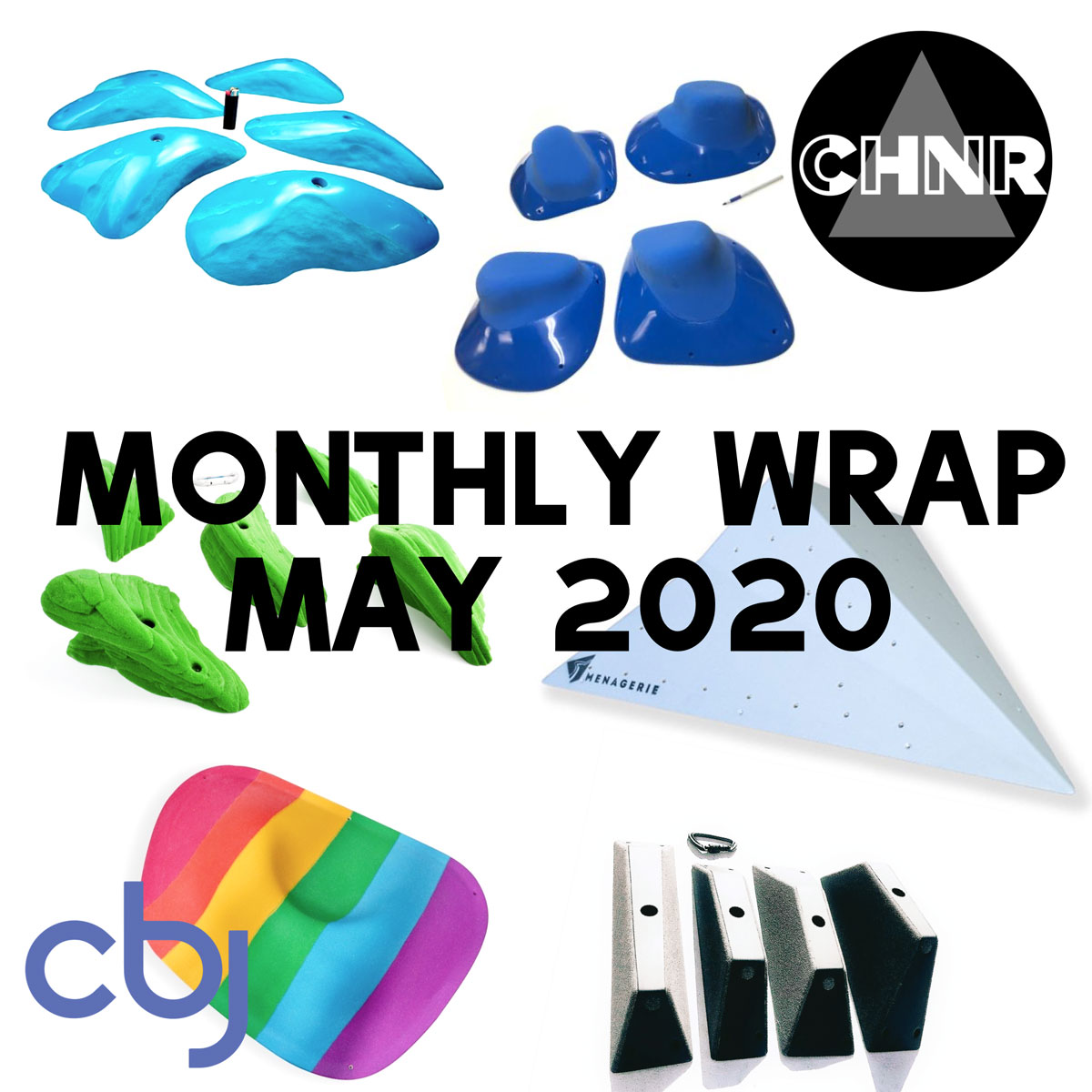 Welcome to the first “monthly wrap” in cooperation with Climbing Hold News Reviews where we will bring you the latest in climbing holds, macros and volumes.  We hope you love this as much as we do!

The climbing hold industry is at a very interesting point right now with COVID-19 and some would say it’s been flipped on its head.  For example: Who would have ever thought that hangboards would be the hottest and most sought after items on the market?  Who would have also thought thousands of new home climbing walls would go up around the world?

May was also a bittersweet month for the industry as we should have been hanging out, touching holds and climbing at the Climbing Wall Assocation Summit 2020. We should have been route setting at Wooden Mountain with Heel Hook Harry, while instead most of us are still on stay at home orders at home.  There is a silver lining which is that many of the holds that were supposed to be debuting at this conference are starting to trickle out and they look better than ever.  At least we all still got to vote on our favorites as the CBJ Grip List 2020 results which will be published later this month. 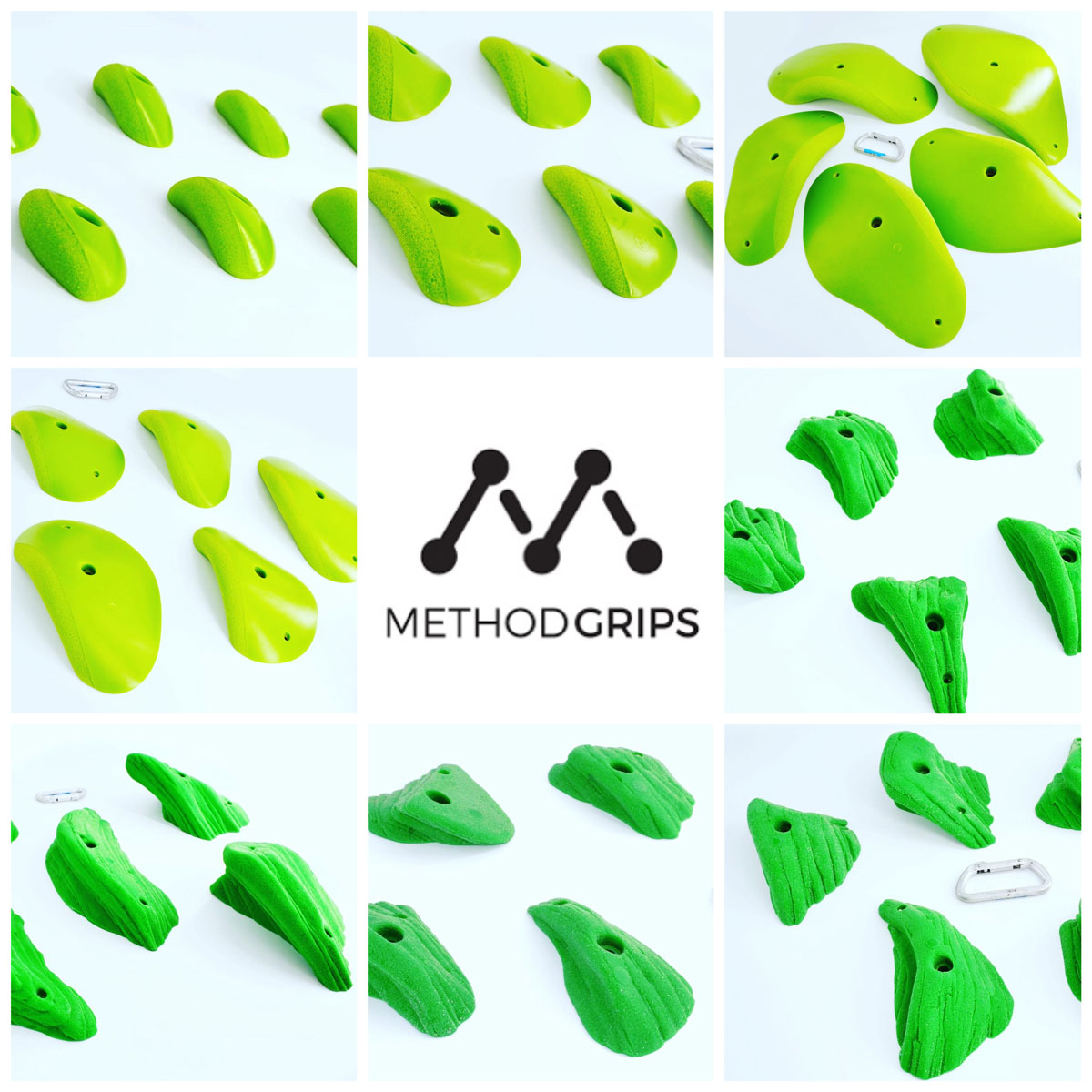 Method Grips announces the latest family of holds shaped by owner Andy Nelson which are called the Moesjin line (pronounced Mo-GIN pictured in lime green) which roughly translates in Korean to “slick.”  They have also announced the latest family offering from master shaper Louie Anderson with the Stratum line (pictured in standard green).  These are a series of positive holds ranging from incut crimps to double hand roof jugs which aim to combine the feel of climbing outside and the comfort of climbing indoors. methodgrips.com 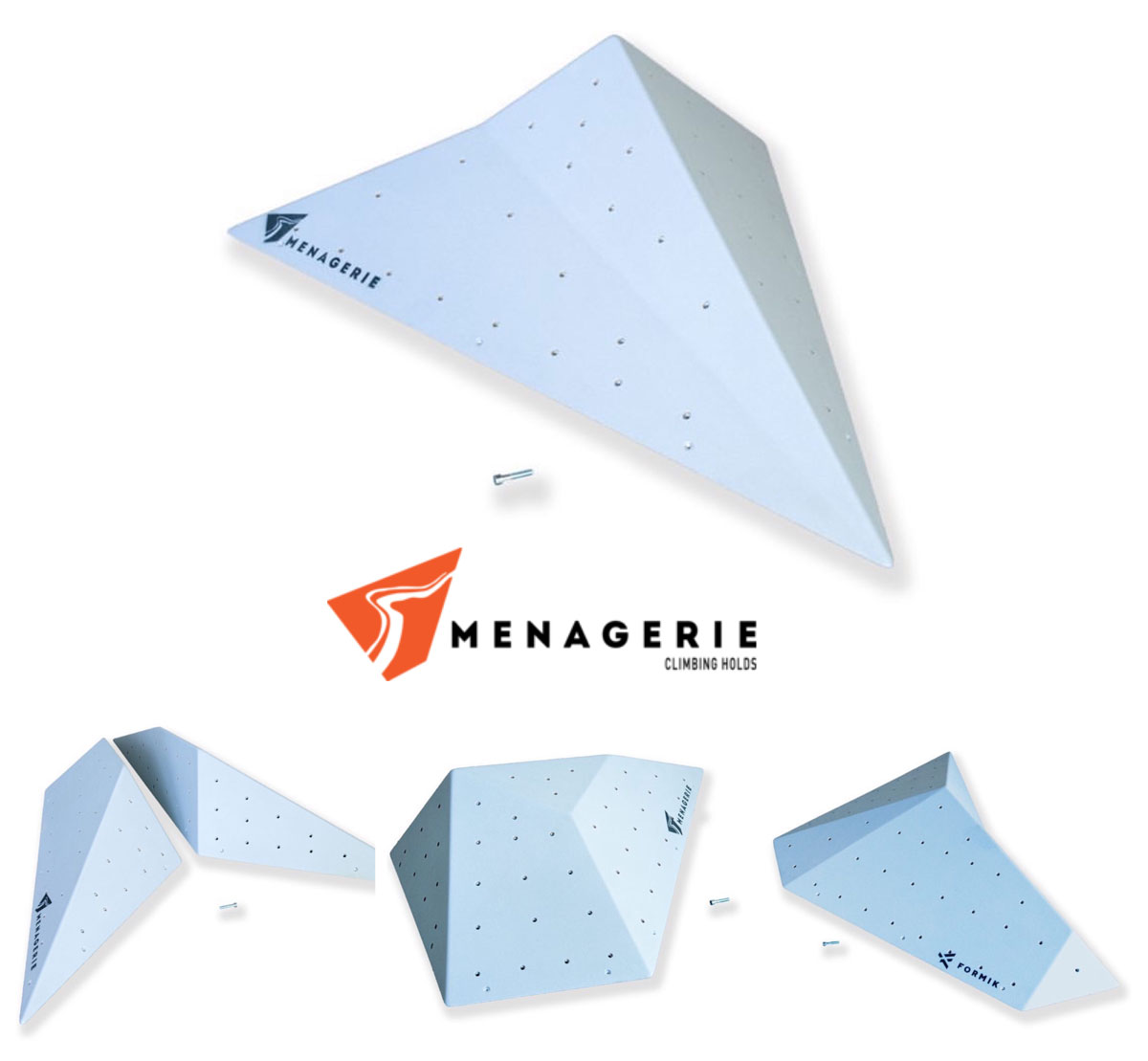 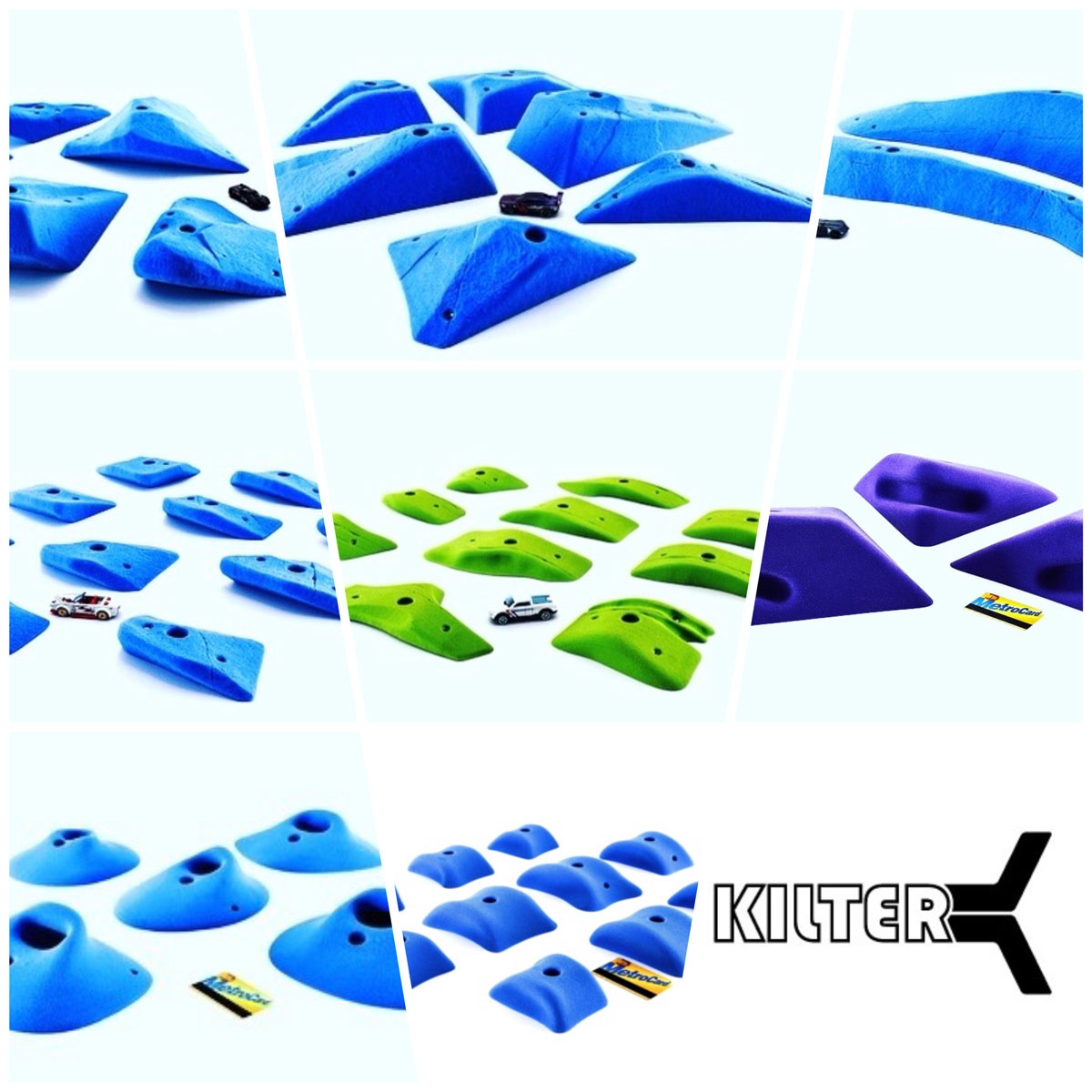 Kilter and Urban Plastix have released a slew of new grips recently. They are expanding their Granite Complex line with several more new Incuts, Pinches and Features as well as more Brushed Sandstone. Urban Plastix has added Regs jugs, pinches, and deep pockets and more Ditches slots and pinches. UP is also developing a new line called Stratos. The Kilter Board now has three nested sizes – 7×10, 8×12, and 12×12 – with adjustable frame options for each. The 20k+ problem database grows daily as people add new blocs. A new board specifically for home users is being developed as well so stay tuned. That layout will work on Grasshopper’s adjustable Ninja Board, the Kumiki Everactive Wall and Lemur Wall Design’s upcoming crossfit-cage mounted frame. settercloset.com 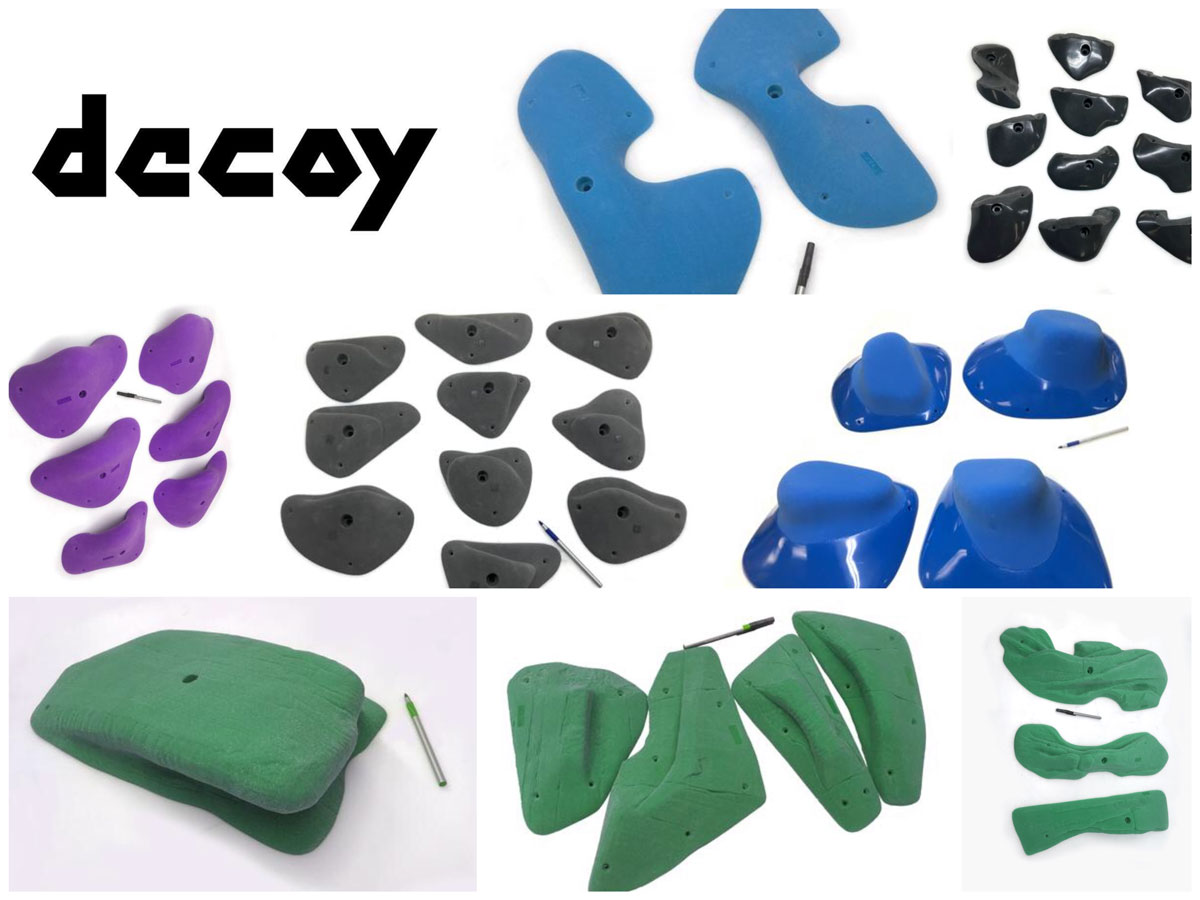 Decoy has dropped 13 new sets shaped by Dan Yagmin which are expansions of the existing hold lines including the minimalist family, dual texture limestone, rollie family and schist family.  The new releases include many types of holds including deep jugs, crimps, dual texture stumps, huge pinches, screw on edges and more. decoy-holds.com

So iLL has officially released their new LEV3L fiberglass macros shaped by Jason Kehl.  These are the largest holds in the Level family (which is the newest family of holds they have released) and are designed to be mirrored to create a 90-degree surface when used together. soillholds.com 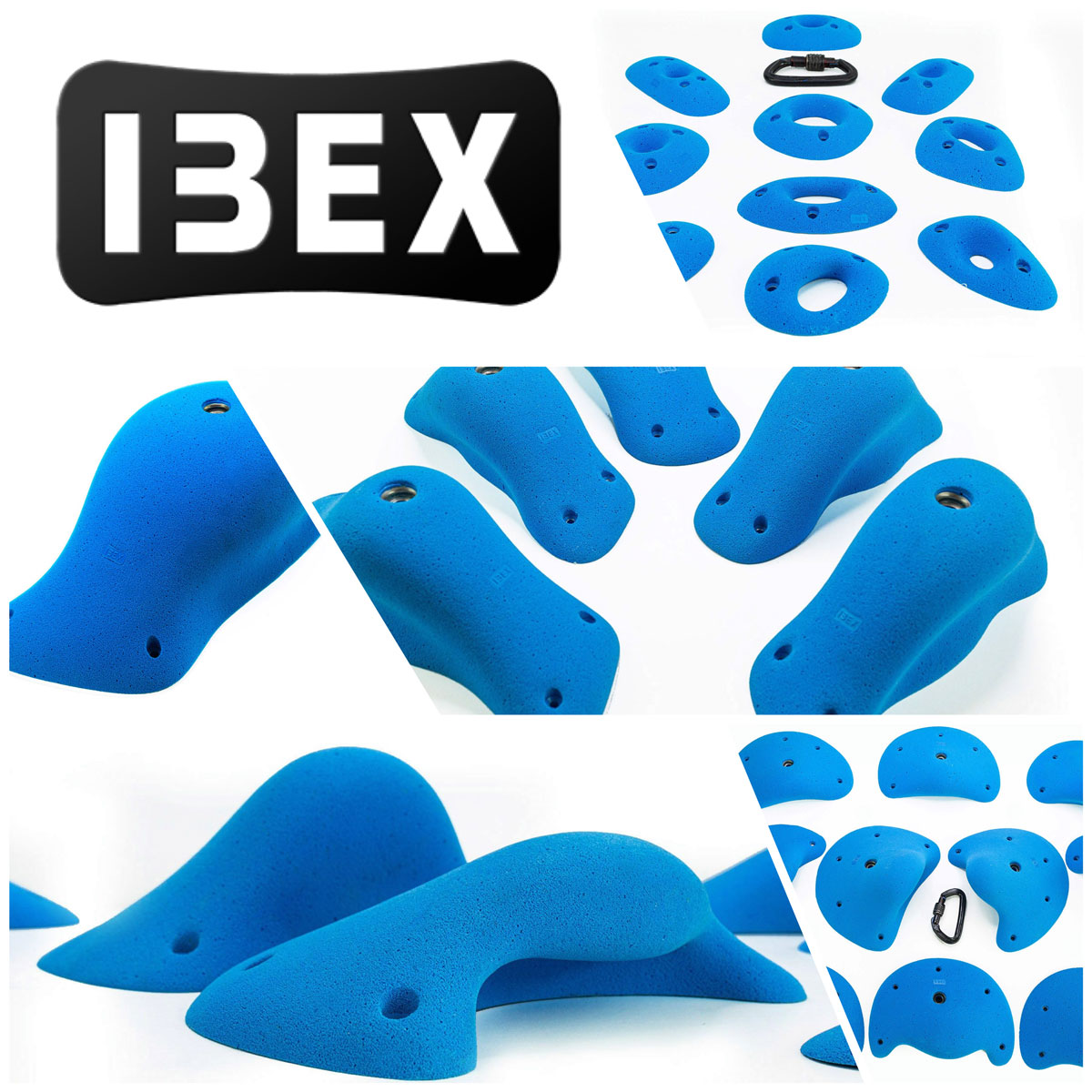 Ibex is releasing the Alpha range shaped by Dario Stefanou which consists of a growing range including 35 sets of 209 unique holds.  20 sets of 117 holds are PE (polyester) and 15 sets of 92 holds are PU (polyurethane) though there are plans to continue expanding this family into 2020 and 2021.  The expansive family includes jugs, pinches, slopers, crack features, edges, crimps, pocket and foot holds) in all sizes from extra small to giga holds. They will be available soon through Compass Climbing owned by Mark Bradley who is the distributor for Ibex and Thrill Seeker in the United States and Canada. ibexholds.com

Grizzly is based out of Canada and is entering their sophomore year of creating grips.  They recently released a series of Dual Texture screw-ons named the Microbes family.  These holds started showing up already on social media on home walls less than 1 week after their release. This brand won the People’s Choice category on the CBJ Grip List 2019. grizzlyholds.com 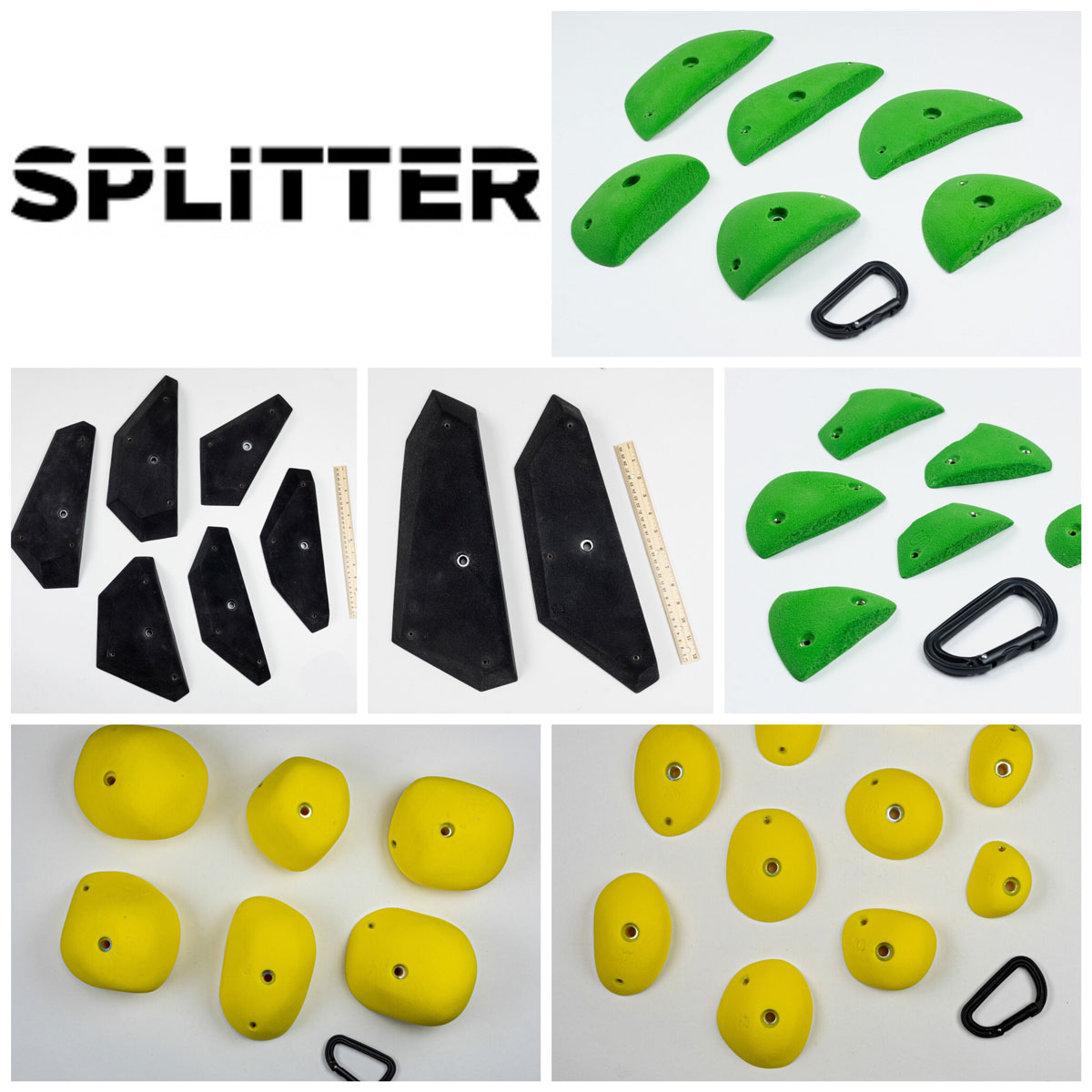 Splitter based out of Salt Lake City, UT is known for their wooden Crack Trainer volumes, but has recently expanded into the area of climbing holds.  Their initial offerings are simple shapes – the Pure Cobbles (pictured in yellow) which are made to mimic the cobbles of Maple Canyon climbing, Fractured Edges (green) which are mimicking granite holds ranging from incut to slopers and the Geo Edges (black) which are sleek linear / flat shapes. splitterclimbing.com 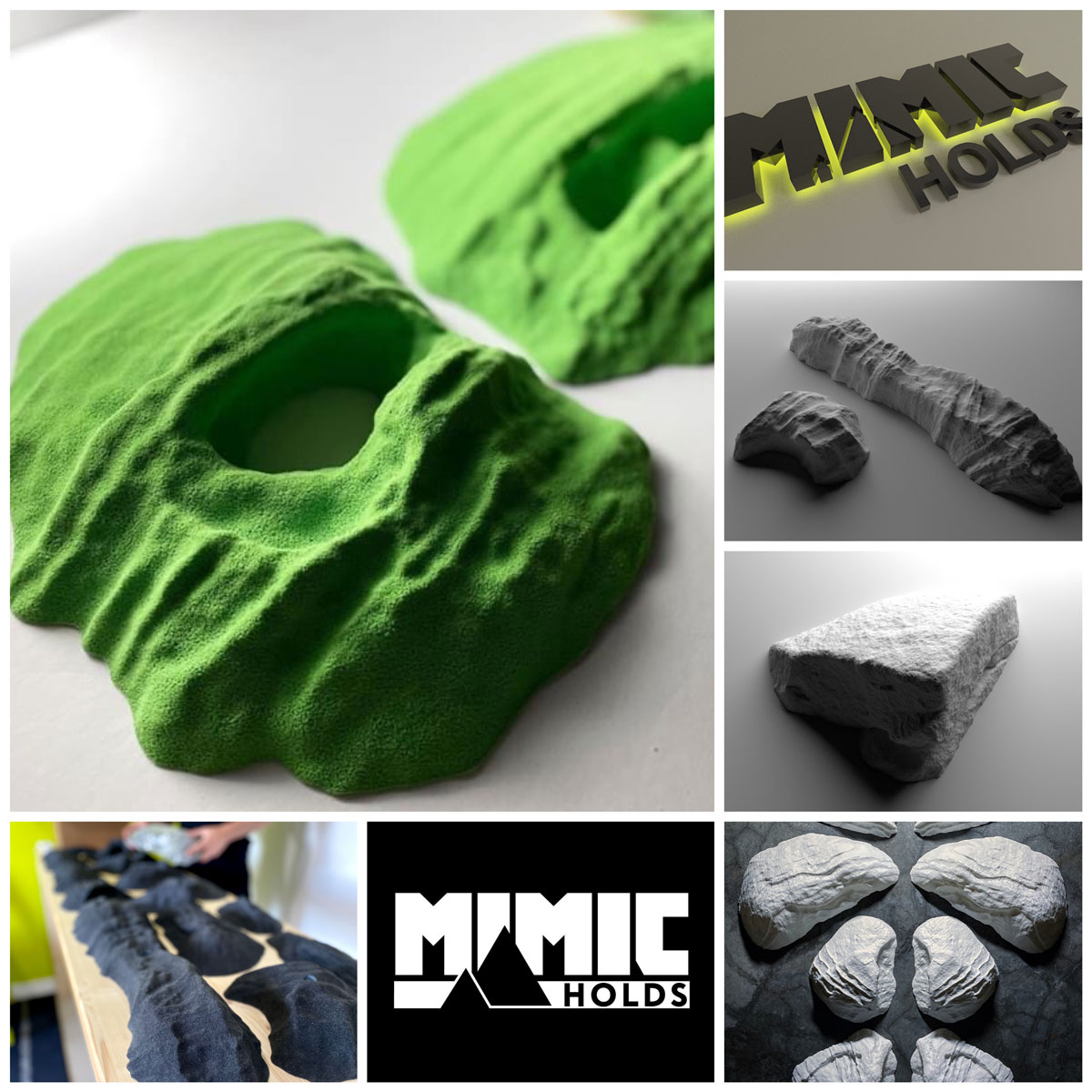 Mimic is owned and operated by Clayton and Cole Hardacre, using 3D scanning and 3D printing to replicate real outdoor rock climbs.  The two brothers founded the company in 2018 and have developed technologies that use the 3D printing approach.  A select number of sets are available now at mimicholds.com, with many more available soon. mimicholds.com

Endure is a small batch hold company based out of Richmond, VA.  They first caught our attention last year when their debut family the Slabbers were featured in a local gym competition at Peak Experiences.  Since then they have expanded their hold families to include a stackable Teacup set and Knob shapes.  They have also recently released a couple sets targeting home walls named Meddlers and Vanguards. climbendure.com 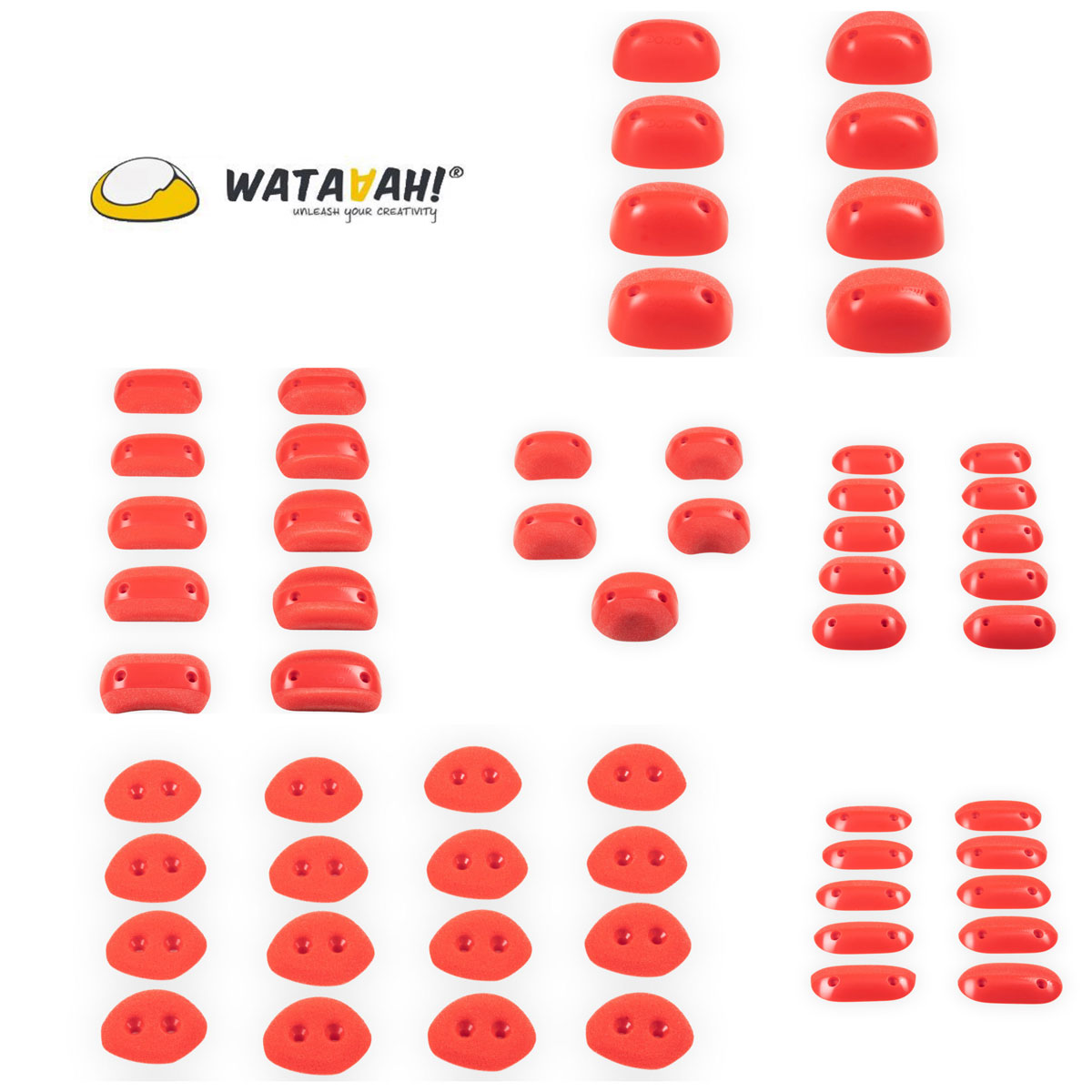 Solo Stile which is owned by Enrico Baistrocchi, has been distributing German brand Wataaah! in the US since 2018.  They have just released their brand-new systems holds designed for home wall or commercial use, the Dojo Training Sets.  This is a series of dual texture holds designed to be used on overhanging walls 20 – 45 degrees featuring crimps / edges / pinches / feet, with fine texture which are attachable via wood screws. wataaah.de/en 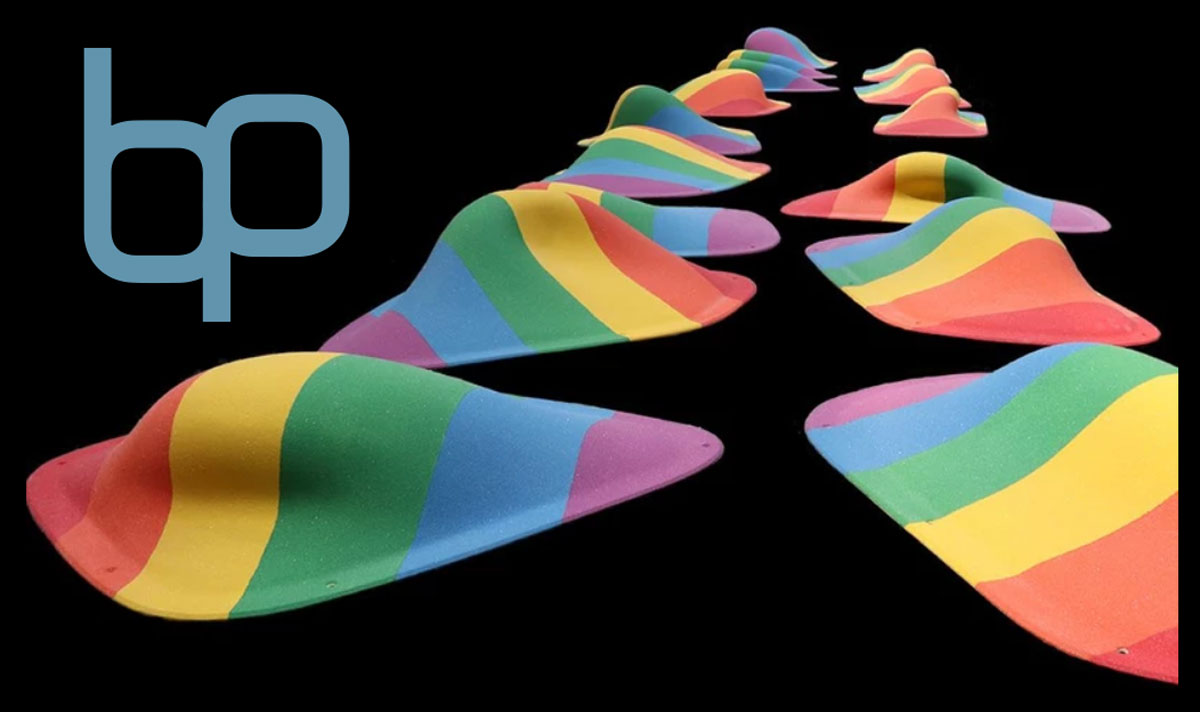 Blue Pill has produced a colorful rainbow version of the Fiber Impressions. These were a special order by their friend and longtime customer Walter Fritz. Is this the future of macros? bluepill-climbing.com

Unleashed shaper Will Watkins has been very busy in Australia during this Quarantine.  He has shaped a set of edges in full texture and dual texture named Boarderline featuring edges of different sizes. Unleashed’s European website is also coming soon which will bring many new holds.  unleashedclimbing.com 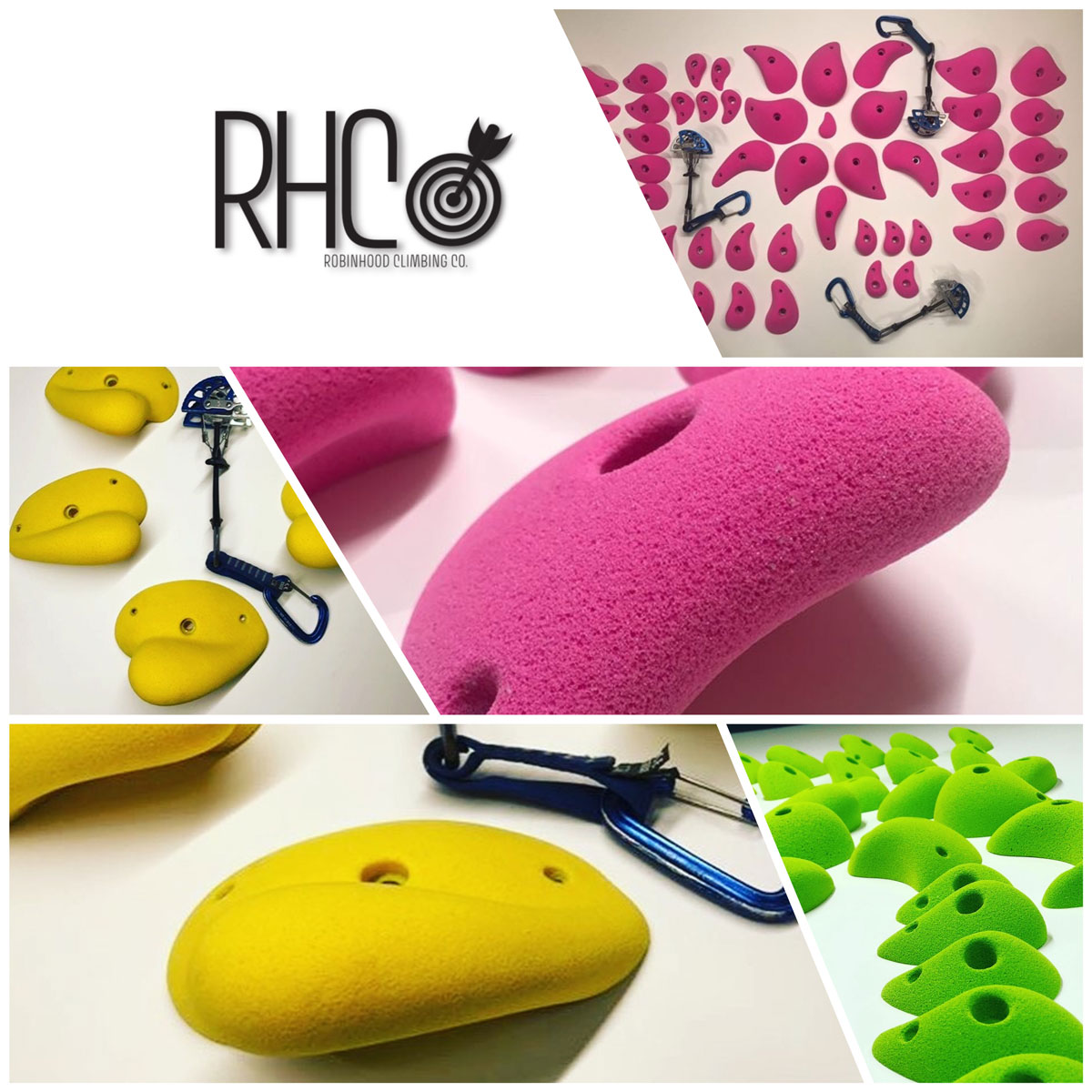 Robin Hood’s first lines are by shaper Andy Nelson of Method Grips. Their Homewall pack features 50 holds that includes 10 jugs, 10 edges, 5 slopers, 5 pinches and 10 feet with a teardrop aesthetic.  The other lines include the Webs which are positive holds with a thumb catch web design, the Wimples which are super positive ear-like holds and a screw-on line. robinhoodclimbing.com 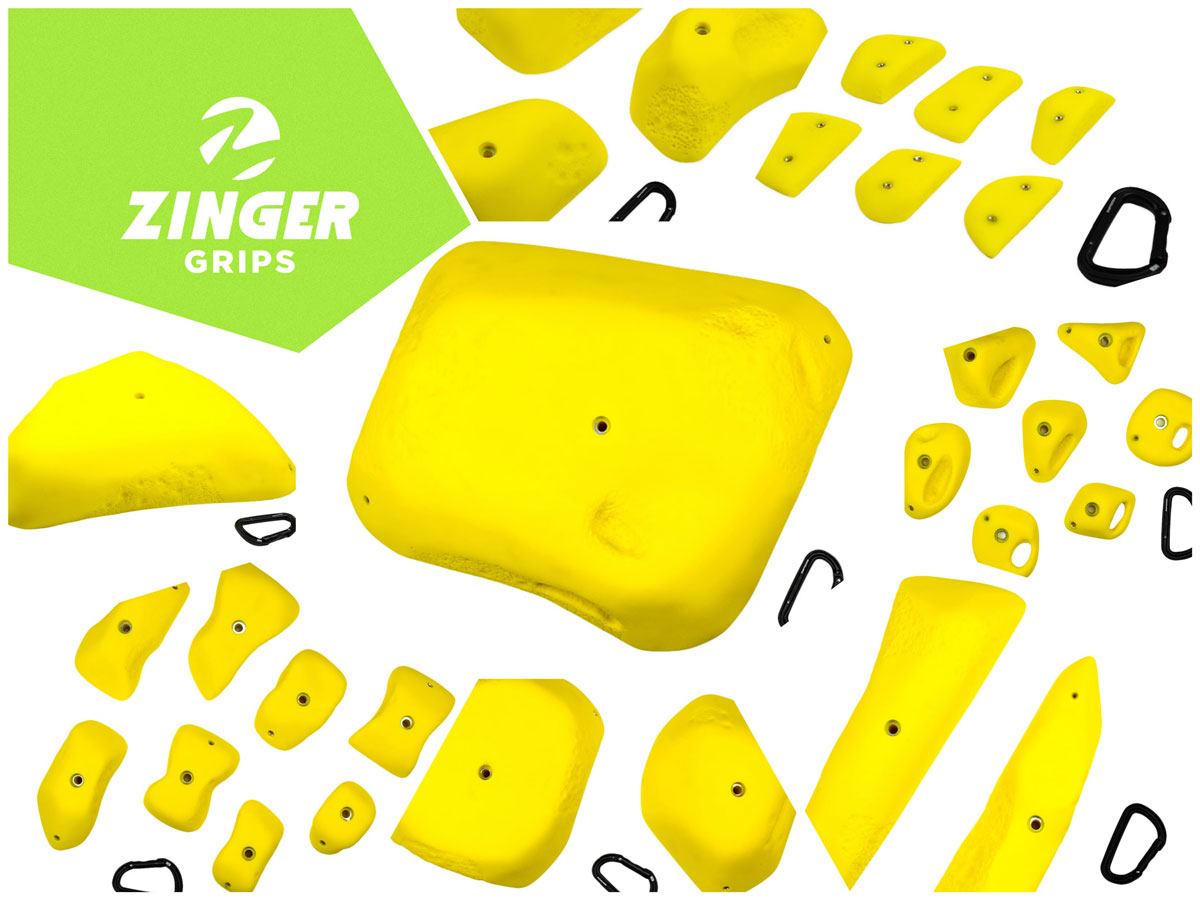 Zinger is a new hold company based out of Memphis, TN.  Their inaugural Lunar line is a combination of pinches, edges, crimps, pockets, slopers and several larger features. zingergrips.com

Megalith is a new hold company from Salt Lake City, UT.  They are debuting with small shapes in 3 families, the Exo, Flow and Hewn series.  Per their website the Flow series utilizes a subtle dual texture to approximate wet, rivulet worn limestone.  The Exo series features dual textures with shapes that draw inspiration from living creatures, and the Hewn series features weathered limestone details.  megalithclimbing.com

Upah is a new climbing brand based in Portugal manufacturing polyurethane holds.  They have launched with a few families including the Mongo family which includes crimps, slopers and jugs with a smooth left or right-handed thumb catch on the side of each holds.  Also coming soon is the Foldz family which features huecos, pockets, half-moon holds and big feet which are designed after fabric folding on itself. They have also released a new capsule-based hangboard recently as well. upaholds.com

New Climbing Holds and Volumes of May 2022: Grip Showcase Edition