As gyms around the country continue to reopen, a substantial contingent of people—comprised of fans, athletes, coaches, youth teams, judges, and would-be volunteers—are left to wonder how the ongoing pandemic woes will impact climbing competitions. At the elite level, the IFSC has rescheduled several of its continental championships, all of which have Olympic implications. For example, the IFSC’s European Championships, originally slated to take place in June, will now be held from October 1 to 8; the African Championships that were supposed to happen in March will now be held from December 10-13. At the national level, USA Climbing recently announced the cancellation of several national championships—while leaving open the possibility of the 2020 Open Sport and Speed National Championships still occurring at a later date.

But cancellations and postponements of previously scheduled events featuring top-level climbers do not tell the full competition story. The fact is, as long as the Coronavirus exists and remains a risk factor for gyms around the country, it will affect local competitions—events long considered to be cornerstone activities for building and bolstering a climbing community in a given market. A prime example would be the Boise Olympics, a fun-filled community climbing competition that was scheduled to take place in July at The Commons in Boise, Idaho. The pandemic forced the temporary closure of the gym and the cancellation of the competition altogether. And, The Commons and the entire gym industry now grapples with whether—and how—mitigation strategies such as social distancing and scrupulous cleaning could be applied to the crowded and highly social settings of local competitions down the road.

CBJ caught up with The Commons’ head routesetter, Gary Mattos, and The Commons’ co-owner, Clint Colwell, to talk about it all—and paint a picture of what local competitions might look like at gyms going forward.

CBJ: No reason to beat around the bush, so let’s start out with the big question: What is the future of comp climbing in a world with COVID-19?

Mattos: I think it’s anyone’s guess. Right now we don’t know what normal life will look like in the future, let alone something as non-essential as climbing competitions. Given that we are allowed to participate in a competition, I think it will look very different. The crowd cheering, the high fives and the party will have to be put on hold. With some thought and some caution, it’s still possible for athletes to be able to test themselves while social distancing, but it’ll take a lot of work and coordination.

Colwell: This all depends on how our mitigation strategies are working—I’m thinking the local and federal government here—and how well the gym’s policies are working. Can we control the risk for contracting COVID with the policies (or variations) we currently have, or will we need to shut down again? When we built our reopen policies we built them thinking about possibly needing to do this for the foreseeable future, potentially years. Basically, until we have a vaccine or some therapeutic that makes COVID-19 a minor threat, we are going to need to keep the same measures that are working to control COVID in place during a comp. As of right now, that means social distancing, sanitization, and great hand-hygiene to combat the inability to sanitize holds between climbers.

CBJ: So, with social distancing, sanitization, etc., is it safe to say that the logistics of local competitions will change?

Mattos: My guess is local competitions will start looking more like championship-level competitions: onsight format, one judge per zone, with zones separated and a limited number of climbers in isolation. And I don’t see a way to hold a comp with an audience. Live broadcast for parents, coaches, and other spectators

Colwell: I agree with Gary, there’s no way to adhere to social distancing protocol and have a live audience unless they are watching via some streaming service or you have a very large space to sit people. The six-foot group density requirements make for a pretty sparse crowd, and I think the energy would be significantly altered. This basically necessitates an onsight format with the thoughts that Gary mentioned right now. Hopefully things are looking up in a couple months, but right now it seems like a large competition would be a prime place to spread a significant number of new COVID-19 cases.

The two largest logistical issues in my mind are wiggle room for the timing of competitors showing up, and having quality enough video that you can watch people climb and be engaged; in other words, a phone camera is probably not going to cut it.

CBJ: How about for the competitors themselves—what sort of mitigation strategies will they experience?

We will have to think about where our athletes are coming from too. How far of a radius do we allow athletes to come from? I don’t think it’s an easy answer, but right now Idaho is encouraging out of state visitors to quarantine for 14 days, so it sounds like out of state athletes might not be an option.

Colwell: Gary nailed this one. Most of these measures we’re already observing so that is not an issue. The big one is the radius of participation. If the authorities are allowing participants to compete from outside the local community that’s great, but we need to have this in mind when advertising.

CBJ: So the days of climbers and volunteers crowding together on the gym floor, mingling and hanging out during and after the competition, are long gone?

Mattos: Unfortunately, I imagine they’re gone for now. It just puts too many people at risk. I know a lot of people climb in comps for the comradery and atmosphere, but for now the driving motivation will have to be competition and testing yourself.

Colwell: Yeah, no crowds. It’s a sad thing to think about, but in a time when we are not supposed to have other people within 6ft. radius bubbles we can’t have a large crowd in a gym.

CBJ: By nature competitors must climb the same routes at competitions. There has been a lot of confusion about the CDC’s information on the virus living on hard surfaces, but it does bring up the question of whether route-sharing by competitors could be problematic—or at least unwise.

Mattos: Climbers will have to wear masks and use hand sanitizer before each climb—and after standing up from the rest chair. We’ll have to remind athletes not to touch their face and be extra aware of their hand hygiene too.

Colwell: Adding on Gary’s comment, a mask greatly reduces face touches and reduces the viral load on the climbing holds. Obviously we cannot sanitize every hold after every competitor. However, by reducing face touches, cleaning your hands between climbs, and social distancing we should be able to effectively reduce exposure.

Mattos: I don’t think there is a gym in the nation that has the space to allow a full category of climbers in an isolation area while maintaining social distancing. We would have to implement some sort of rolling check in for isolation. For example, climbers 1 through 8 would be allowed to check in for iso 30 minutes prior to the start of the round. As soon as climber 1 steps out of iso for the first problem we let climber 9 in and so on.

Colwell: Isolation needs to be large enough to support roughly eight people and still follow social distancing protocols. We think eight because climbers will have roughly four minutes per climb during the onsight round, and that will give people in iso about 30 minutes to warm up before they are called out to climb. Possibly have coaching “boxes” (like basketball) where coaches can be in during iso. You would need a judge in iso to keep folks distanced as well—and coaches could be playing that role too.

CBJ: The moral here is that local competitions will look very different.

Mattos: Competitors who want the competitive aspect would still enjoy this format because they will still get to compete. Competitors who want the social aspect of climbing competitions probably would not enjoy this format. There are a lot of athletes out there that want to be in front of a crowd and enjoy the spotlight. This format might not give them that aspect of competition that they’re used to, but it might get some competitors that don’t like the crowds and the pressure to try out their first climbing competition.

Colwell: For our demographic we don’t think this format we described would be as fun for spectators—and probably not as much fun for competitors. Our community likes the social aspect and excitement of cheering each other on and the spectacle of finals—who doesn’t? But, the conclusion we’ve reached about COVID-19: it is irresponsible to hold a big party-style comp at this time. This is heartbreaking for us, but we think it’s the correct conclusion for now. I am hopeful that some new piece of info will come along that allows us—the collective us—to effectively mitigate risk of COVID-19 transmission in a large group setting so we can get back to throwing big community party-style comps. But until that time, I believe that competition formats will need to change, and we will need to look for other ways to build the community and get non-competitors involved in comps. Hopefully discussions like this lead to some new ideas. 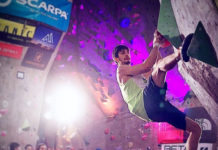 Always Be Open to New Ideas: Behind the Desk with Charlie Schreiber 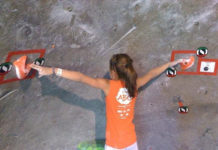 How to Set Better Routes for Children

1,800 Climbers to Compete at Regionals