Behind the Desk… is an ongoing series that profiles people influencing and advancing the industry in gyms around North America. But this time, CBJ decided to head south—way south—to talk about how gyms in South America are adapting to the COVID-19 pandemic and what the gym scene is like in Argentina.

CBJ: Tell me a little bit about your gym, Realization Escalada, and how it has been impacted by the COVID-19 crisis?

Cicconi: Realization was started in 1999 by original owners Ariel Martorello and Andrés Puertas. It was rather small, but it enlarged over time even though there wasn’t much information available here about artificial climbing walls. The climbing holds were mostly self-made. In 2016, Ariel Martorello went to live in Bariloche, which left Andrés Puertas as the sole owner.

We tried to improve the facility, as well as the quality of the attention to the climbers, and improve the routesetting with weekly route turnover. I started to work as chief routesetter together with another routesetter named Daniel Fontan, and eventually we invited other routesetters to work with us. We organized climbing festivals at the gym. And in the year 2015 we moved to a new location that provided greater comfort and more of a commercial profile—which generated a greater influx of climbers. Then, in 2019, we started to work with some European companies like Euroholds and Entre-Prises. We even organized the first commercial setting courses in Argentina. And we continue to work on improving training and are always coming up with new ideas.

The pandemic—and temporary closure—forced us to focus on income from merchandise sales and donations. We are still closed, but we have implemented an app for booking two-hour shifts (with half-hour time slots allotted for disinfection between shifts). Currently in the city of Buenos Aires, climbing gyms have not been allowed to reopen, but we have repainted our walls and established some mitigation protocols.

CBJ: This pandemic has actually brought the climbing industry in the United States and Canada together in a lot of ways. Many gyms have all been forthcoming in sharing information and strategies. Are you seeing the same sort of climbing industry camaraderie in Argentina and South America?

Cicconi: Great question, but not so easy to answer. In South America there is not a developed climbing industry like there is in the United States or Europe—mostly because of the costs, and in many cases because of a lack of organization. But yes, there is a lot of initiative to improve the sport and many concrete initiatives here.

There are some great climbing gyms in Brazil, Chile, Ecuador, Colombia and Argentina, and those have high standards in terms of infrastructure—but they are not the majority. Most climbing gyms are small and need to embrace more commercial strategies in order to grow. But it is still difficult to introduce any commercial vision to climbing gyms, at least in Argentina; yet a good commercial structure—in terms of management—is what will eventually lead climbing gyms in South America to greater profitability and growth. In that respect, I believe that initiatives such as commercial routesetting courses can contribute to gradually changing things.

The positive side is that the pandemic has generated an opening of information. It has encouraged an acceleration of the modernization processes for many climbing gyms. The negative side is that some gyms have suffered the consequences of the quarantine—and have not been able to survive, partly because of the lack of economic income and lack of commercial vision for their business, in my opinion.

Luckily, in some places in our country, since the beginning of June, some of the restrictions have been lifted and little by little climbing gyms have been able to start working again. The gyms with the most innovative commercial vision have found new commercial outlets. These outlets have allowed them to sustain some income while closed and encouraged them to invest in commercial alternatives. This includes, like I said, the incorporation of merchandising as an alternative source of income or, say, the manufacture of climbing holds.

What has also happened is that, as a consequence of the pandemic, some climbers have started building climbing walls in their homes. In terms of communication between gyms in Argentina, there are several climbing associations that have suggested post-COVID-19 protocols, but there is no joint effort between gyms, in terms of strategies. The management has been rather individual for each gym, and I do not see that as a positive. If we look at this more broadly, in terms of South American gyms, there is no structure on the whole. I think channels of communication should be established in this regard, but they do not yet exist.

CBJ: When you say that there is less of a structure connecting South American gyms—can you explain to me a bit about the history of climbing gyms in Argentina and South America?

Cicconi: As in other places in the world, climbing gyms here emerged due to a need for training, to take rock climbing to a higher level. Gyms were a means to an end. But as time went on, climbing gyms attracted climbers who not only used them as a means to train, but also climbers who were interested in urban climbing—in other words, there were climbers who were only climbing in gyms. This development began to take place in Argentina in the 1990s, when the first artificial climbing gyms were built here. But the first entrée into sport climbing in Argentina was perhaps an artificial concrete and stone climbing wall—which still exists today—in an area of the National Secretariat of Sports. It was built by the Centro Andino Buenos Aires in 1982.

But I think a turning point in the history of artificial wall climbing in Argentina was when several other parts of the country constructed their own climbing gyms; facilities were built in Pacheco and late El Rocodromo La Plata, a Buenos Aires province, in Cordoba (Polideportivo de Cordoba), in Mendoza, and later in San Juan. A concrete climbing wall was also built in General Alvear (in Mendoza province), in Bariloche, at the Club Andino Bariloche, and at Río Negro Province. It was these initiatives that led to the first national championships for Difficulty and gave rise to the first sport climbers in Argentina.

That was a starting point, and years later bouldering gyms appeared in several cities and in people’s houses. Stylistically, these gyms were very old-school, as the builders would frequently cut costs or be very DIY. Things began to change around 2010, when climbing gyms began to be thought of more as elaborate sports centers—for example, there is an Olympic wall in Buenos Aires. There have been some very good gym projects lately, but as I said before, between the pandemic and the economic reality, we will see what happens in the future.

CBJ: You mentioned importing some equipment from Europe. But are there some good companies in Argentina that make climbing holds and climbing walls?

Cicconi: Although there are many manufacturers of climbing holds in Argentina and South America, there is not much of an industry, per se—partly because of the high costs of creating and producing climbing holds at an industry level (high cost of materials, etc.) Depending on the country, it is often more convenient to just buy holds from abroad, in terms of a price/quality ratio. In the case of Argentina, it also depends on the import laws of our country—which vary due to fluctuating government policies.

However, what has grown here a great deal is the market of more artisanal holds—which have boomed during the pandemic. There are some really creative shapers making wooden holds by hand. There has also been a lot of progress regarding volumes made of wood. And there are climbing hold manufacturers who are working with resin and fiberglass; they have improved a lot, but there is still a lot of work to be done in terms of design. The best gyms therefore usually buy holds from the United States and Europe.

CBJ: You are the chief routesetter at your gym. What is the routesetting scene like in Bueno Aires and Argentina?

Cicconi: I’m a chief routesetter certified by the F.A.S.A. (Federación Argentina de Ski y Andinismo), the institution that governs climbing in Argentina. I’m a national-certified routesetter, and nationally certified to instruct routesetters too. I also taught the first three courses on commercial routesetting in Argentina, although those did not have any official certification. But I hope such courses will soon be made available with the federation’s certification. Since 2016, the federation has been openly promoting routesetting courses.

In Buenos Aires, climbing has grown a lot recently, and therefore the gyms have had to adapt to the demand. I believe that this trend will increase exponentially as the quality of the gyms increases along with the professionalization of certified instructors (there are currently around 150 in Argentina), the investment in climbing holds, the development of more infrastructure, etc.

I’m an optimist. For example, I remember one graph from Vertical-Life that indicated an incredible increase in the number of climbers in Brazil in the last seven or eight years. I believe that this trend will be replicated in Argentina and the rest of South America. Currently, the federation here is planning some new routesetter education programs. We are working both on the level of routesetting in competitions and on the level of commercial/gym routesetting (which is particularly what interests me most for the greater diffusion of the craft). We are already working with some youth teams for a Dakar 2022 [Summer Youth Olympics] program, along with coaches and national routesetters with the support of the E.N.A.R.D. (Ente Nacional de Alto Rendimiento Deportivo) in coordination with the F.A.S.A.

In addition to the daily work of routesetting, I try to participate in all the online routesetting forums and discussions on social media. I read information as much as possible from other places around the world. I think that there are some very good routesetters, many of whom have set at the national, continental, and Pan-American championship level.

I believe that routesetter training is fundamental to being able to provide greater quality in all the gyms, so routesetters here need training at an international level. Sometimes it is very difficult, though, because of the economic costs. However, there have been some exceptional training activities done by IFSC-level routesetters like Tonde Katiyo in the Master of Chile 2019. That type of knowledge has been very valuable to us.

Are you leading a climbing gym or brand through this unprecedented period? Or, do you work in the industry and have a story that others could benefit from hearing? If so, please contact us and tell us about it. 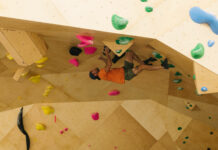