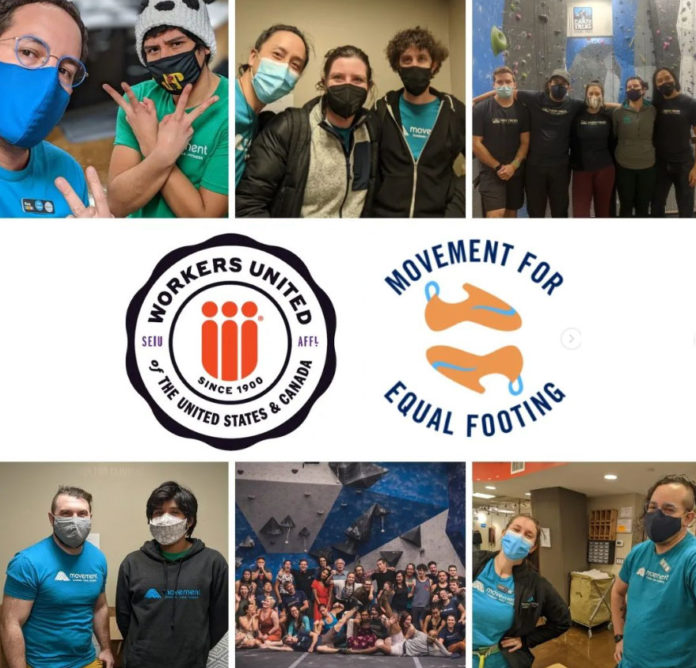 Workers at Movement Crystal City in Arlington, Virginia, recently announced the imminent certification of their climbing gym union, reportedly the first in the United States. The process was overseen by the National Labor Relations Board (NLRB), an independent federal agency that enforces the National Labor Relations Act and “protects the rights of most private sector employees to join together, with or without a union, to improve their wages and working conditions,” per the NLRB’s website.

According to a previous announcement, Crystal City workers sent a notice of intent to unionize to El Cap―the parent company of Movement, one of the largest climbing gym chains in the world―on June 29, signed by fifteen members of the union organizing committee. An election to unionize, conducted by the NLRB, was later held on November 14-16, with workers voting 28 – 14 in favor of unionization. However, three objections were filed, the last of which the NLRB Board overturned on March 21, recommending the certification of the union. There were no further appeals by the April 4 deadline, and the NLRB is expected to officially certify the union as the workers’ representative for collective bargaining.

“We are proud to be the first unionized gym in the country, and are encouraged by our management’s commitment to dialoguing with workers. We look forward to coming to the table in good faith to bargain for improved working conditions and strengthen our excellent community,” organizer Wendy Low said.

Referred to as the Movement for Equal Footing (M4EF), the formation of the first certified climbing gym union in the United States is a major development in labor relations in the industry―for workers and gyms. According to the NLRB’s website, “Once a union has been certified or recognized, the employer is required to bargain over your terms and conditions of employment with your union representative.” After creating a constitution, electing leadership and establishing bargaining committees, the next step for the M4EF union will be working with Movement leadership to reach a collective bargaining agreement on matters related to compensation, benefits and working conditions.

“Through a union contract negotiation, the workers will decide for ourselves how we want to be represented as a group, what we want to prioritize, and what we’re willing to compromise on,” said Gus Mason, also an organizer and worker at Movement Crystal City. The M4EF union organizing committee is comprised of over a dozen full-time and part-time workers at the gym, from coaches and instructors to shift supervisors. Fellow organizer Sylvain La said, “We’re excited to give the workers at Crystal City a seat at the table and establish open lines of communication and improved transparency.”

Although the M4EF unit will be America’s first certified union at a climbing gym, it’s worth noting that it’s not the first collective action by workers in the climbing industry. As documented in John Burgman’s High Drama, as early as 1990, some of the workers at Jeff Lowe’s JMB wall company went on strike ahead of that year’s Berkeley Rockmaster competition. (“They went on strike for the duration of the Berkeley Rockmaster, refusing to work unless Lowe agreed to pay them in advance going forward.”)

But public and formal organization of collective worker action in the industry may be on the rise of late. More recently, as reported in CBJ’s Gyms & Trends report, in 2020 workers organized at the Brooklyn Boulders and Hoosier Heights climbing gym chains to demand significant changes by their respective gyms’ leadership, launching petitions (here and here) that obtained hundreds of signatures.

Workers have been organizing in adjacent industries like the outdoor industry as well. In January, workers on Outside magazine’s editorial staff issued a statement declaring their intent to unionize with the Denver Newspaper Guild and Communications Workers of America (although an election was not held). And just last month, workers at an REI store in Manhattan voted in favor of unionization―a first at an REI store―and will be represented by the Retail, Wholesale and Department Store Union.

These examples of collective action have been hitting headlines at the same time as labor movements at even larger corporations, such as the unionizing at more than a dozen Starbucks locations―which like the M4EF union are represented by Workers United―as well as Amazon. Only days ago workers at an Amazon warehouse in Staten Island voted in favor of unionization in what has been called “one of the biggest worker victories in modern U.S. labor history,” although Amazon is filing objections to the vote.

As always, the climbing industry is not immune to these labor struggles and, as the industry evolves, more collective organizing and unionizing by workers may therefore be on the way at climbing gym businesses. At the moment, all eyes are on Movement’s.

“We strive to provide employees with a unique chance to pursue a career doing what they love in a community where staff members at all levels care about and communicate with one another,” Movement’s CEO Robert Cohen told CBJ. “We are committed to remaining the best place to work in our industry―a place where coming to work every day is meaningful, engaging and fulfilling, and a place where people work together to make the difference they want to see in the world.” The Movement climbing gym chain is the largest in North America and consists of 19 facilities spanning 7 states, with a 20th facility on the way in Dallas.

Stay tuned to CBJ for more updates regarding union and other economic developments in the industry as they become available. More information about the Movement for Equal Footing can be found in this Common Climber article, which first broke the story.

Lessons Learned from the COVID Crisis (Vol 1): Have a Growth...

Always Be Open to New Ideas: Behind the Desk with Charlie...