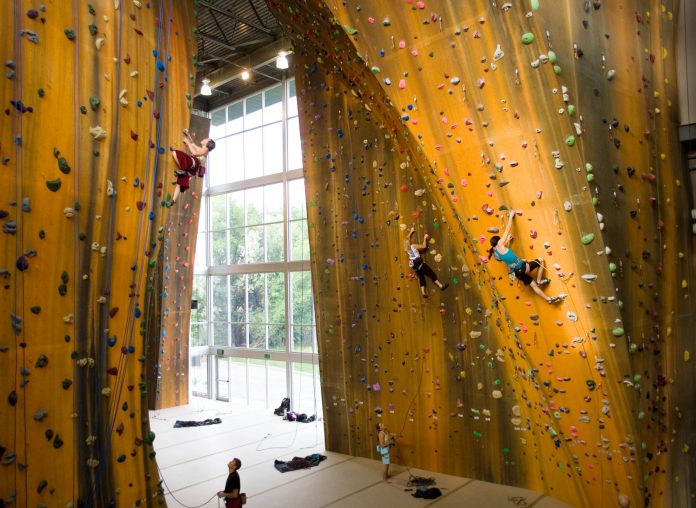 In 2006, Walltopia took part in the Climbing Wall Association’s Summit―the industry’s largest trade conference in North America―for the first time. A stranger to most everyone there, the Bulgaria-based company showed up with a tiny booth in the corner of the exhibition hall. Few visitors stopped by, and the cultural difference was apparent to those who did: the Walltopia employees speaking with Eastern European accents and overdressed in suit and tie; their American colleagues dressed business casual.

A climber named Jeff Pederson was one of the passersby to make a stop at the booth, hoping to realize an innovative idea and still seeking the production technologies to make it happen. At that point in time, Walltopia had never produced a climbing wall like the one described by Pederson, but the company embraced the challenge.

The goal would be to build a climbing facility in Utah with walls that mimicked the state’s sandstone canyons, which were popular among the climbing community. Without a clear plan yet, the Walltopia team at the CWA Summit saw the power of the vision. The company got to work and soon found the right technology to build the walls exactly as Pederson had imagined them.

Momentum Climbing in Sandy, Utah, was the first Momentum facility and now features over 20,000 square feet of unique climbing terrain. The gym has become an icon of the region’s climbing community and still operates with the same climbing walls that replicate the climbing crags of Indian Creek.

In the years that followed, Walltopia has constructed a total of six climbing gyms for Momentum alone, and many more throughout the US. Altogether, the team at Walltopia has completed over 1800 projects in 78 countries around the world.

“We tend to always look forward in our business. Every time we do something and we have to do it again, we try to look back and learn what were the mistakes and what we can improve. Where can we push, how can we elevate climbing? And I see that Walltopia is doing very much the same. So, it’s nice working with a company that shares the same vision, not staying in the same place but always setting a higher bar and moving forward,” says Pederson, co-owner of Momentum Indoor Climbing.

Take a virtual tour of Momentum Sandy below, and more industry stories can be found at the Walltopia Stories exhibition.