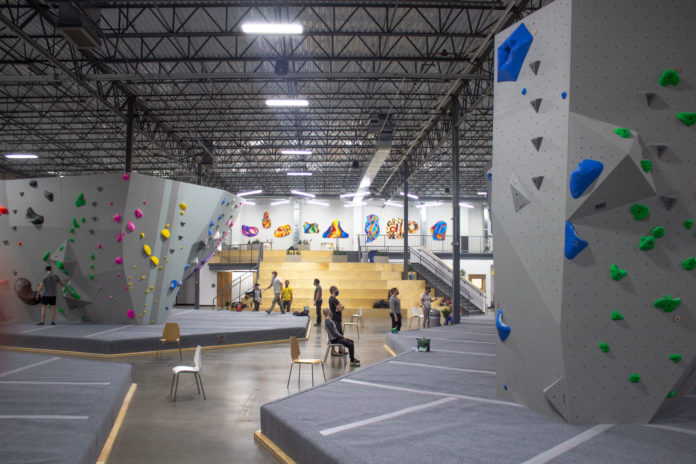 Specs: 24,000-square-foot bouldering facility officially opened to the public on January 21, 2021. Although certain aspects of the facility are still being completed, the gym will eventually feature a 400-square-foot yoga room (which will also serve as a conference room with a projector screen) and a “fitness mezzanine” (measuring approximately 4,000 square feet, with treadmills, bikes, rowing machines and weights), in addition to its bouldering walls. Customers will also be able to work at tables in the gym and access WiFi. A coffee and espresso bar is forthcoming as well.

Another noteworthy architectural aspect of the gym is a “monumental stair” feature—a central point of the facility where people can congregate, relax, store their belongings, and spectate during competitions. This stair feature, which is already completed, leads to the mezzanine and was inspired by similar features at sports complexes and libraries in Europe. “We’ve tried to incorporate some of that European aspect into this facility, and people really seem to like it,” Iron City’s owner, Dean Privett, told CBJ.

Iron City Boulders is operated by Moments Climbing, a Scandinavian company that also operates Blue Swan Boulders in Florida and three climbing gyms in Finland. Iron City’s stair feature, the climbing surface within the gym, and even the routesetting were specifically influenced by Moment’s Finnish facilities (such as the Kiipeily Areena), the architecture of Helsinki, and ideas offered by Henrik Suihkonen, the CEO of Moments Climbing.

Privett noted that Iron City Boulders in Pittsburgh is voluntarily limiting its capacity to 25 percent (100 customers at a time) for the time being, as a COVID mitigation strategy.

In Their Words: “I’m from Pittsburgh. Basically my whole career has been trying to open a climbing gym in Pittsburgh. It has taken about 10 years. But I’ve always wanted to open here—mainly it’s a hometown thing, to introduce people to climbing. The Midwest, in general…and the Rust Belt…all of these places are full of people like myself who maybe don’t (or didn’t) fit into traditional sports. Well, climbing made my life considerably better, so my goal has always been to provide that same opportunity to people in Pittsburgh. And especially in the past three years, the demographics of this city have really shifted. There’s been a huge influx of people from New York City and Salt Lake City and elsewhere who have found that Pittsburgh is both affordable and full of cool restaurants, culture, and close proximity to outdoor recreation. Pittsburgh is really pretty as well—there is a lot of greenery from the forest, there are all four seasons, and there are enormous parks for jogging and mountain biking. It’s a really cool location that has always kind of flown under the radar until recently.”
—Dean Privett, Owner 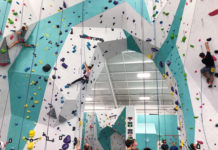