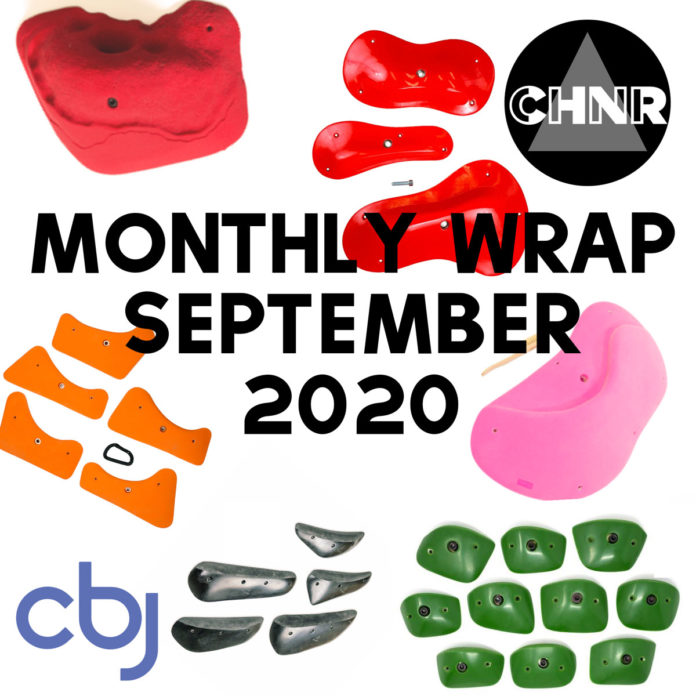 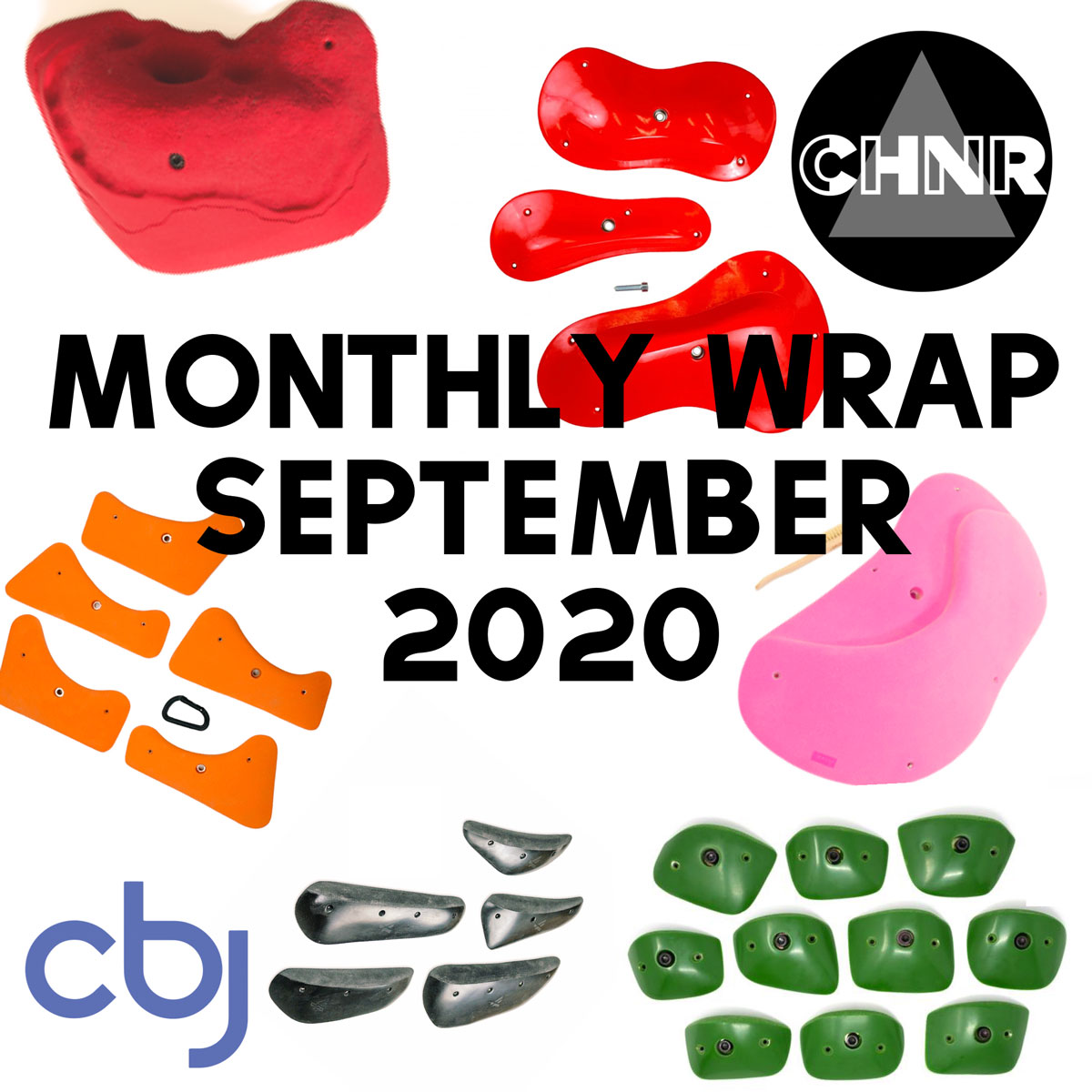 Welcome to the fifth monthly wrap in cooperation with Climbing Hold News Reviews (CHNR), where we bring you the latest climbing holds, macros and volumes releases each month. September saw more encouraging signs for gyms in the latest CWA reopening survey, and climbing hold companies continued to release new shapes as we head into Fall. Without further ado, here is your CHNR September Grips Wrap. We hope you love this as much as we do! 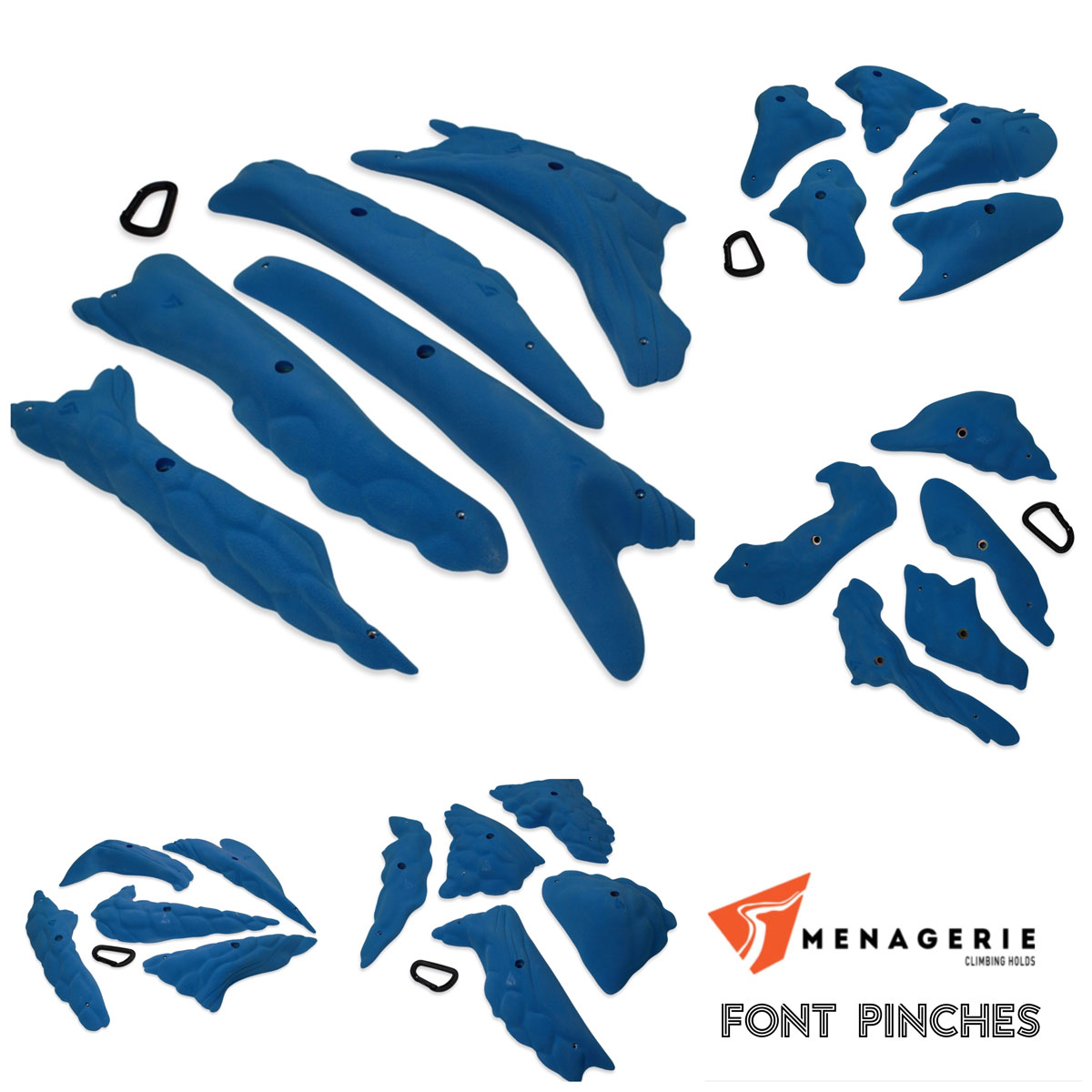 Menagerie Climbing has been releasing a ton of new lines recently, all shaped by owner Andy Raether. This month sees the beginning release of the Font series. Long ago Menagerie had a different font style, but this release sees a huge expansion and re-imagination of the original shapes. The Font set is being released as the Font Slopers, which contain 30 bulbous holds of different sizes, profiles and positivity, as well as the Font Pinches, which contain 20 holds ranging from medium to 2XL to start. We heard there are also extremely large macros in development―up to 7XL in these styles―so stay tuned for a whole lot more. https://menagerieclimb.com 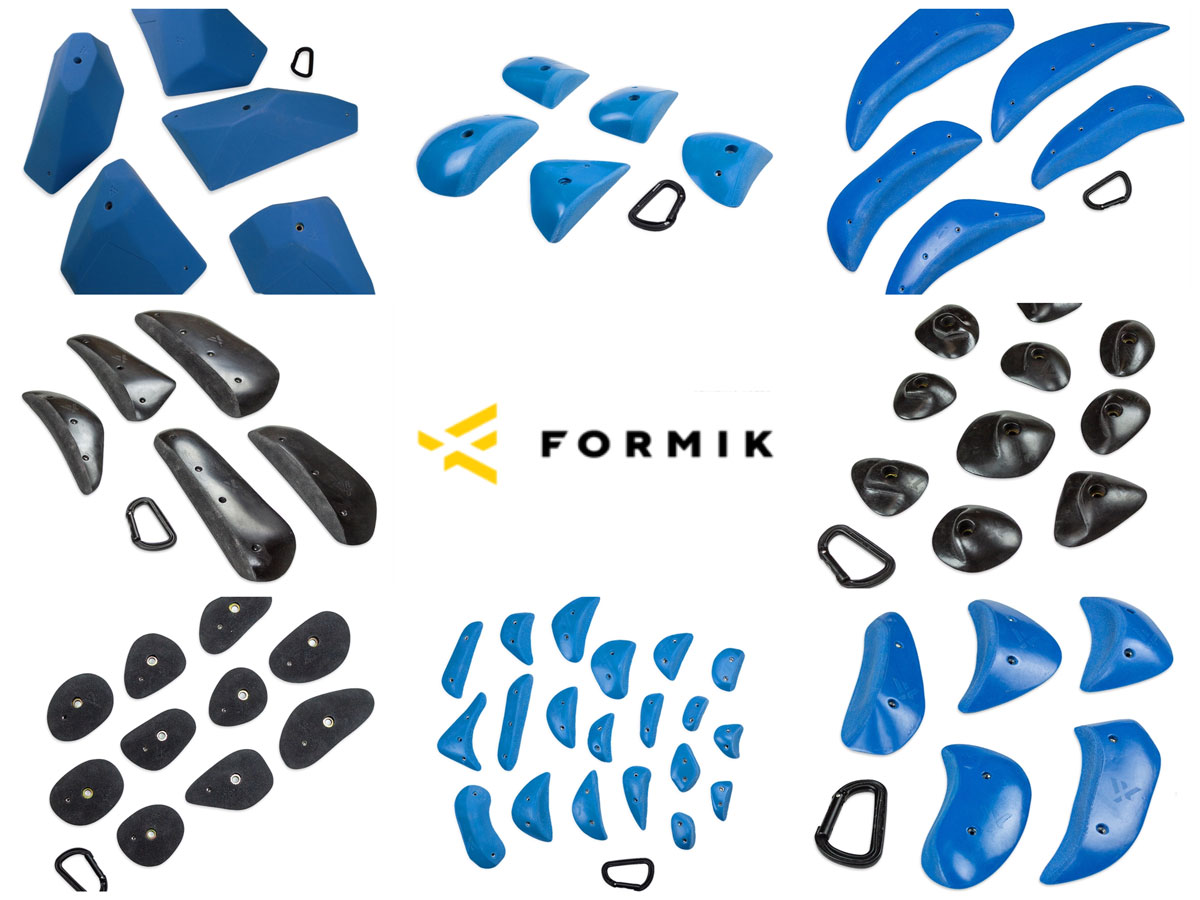 Formik Holds is a brand-new sister hold company from shaper Andy Raether of Menagerie Climbing, who is partnering with professional climber Daniel Woods. Previously we featured their complex wooden volume shapes, as well as hints of the interesting star Destroyer and Mothership macros to come. This month they released the beginning of their polyurethane series, which features mostly dual-texture holds. The largest line by far is the Tensors, which are angular, blocky and directional geometrical holds. Other lines feature the Broadswoards and the Smooth Criminals, which are low profile dual-texture screw-on-only holds designed for volumes and competition climbing.  And we can’t forget about the Edges, which are foundational, dual-texture bolt-on holds, as well as the technical dual-texture pinches of the Chicklets and Slick Shoes. Formik also released the screw-on small Patches, which are full-texture and very low-profile screw-on feet.  Formik is poured by Vertical Solutions / Proxy. https://menagerieclimb.com 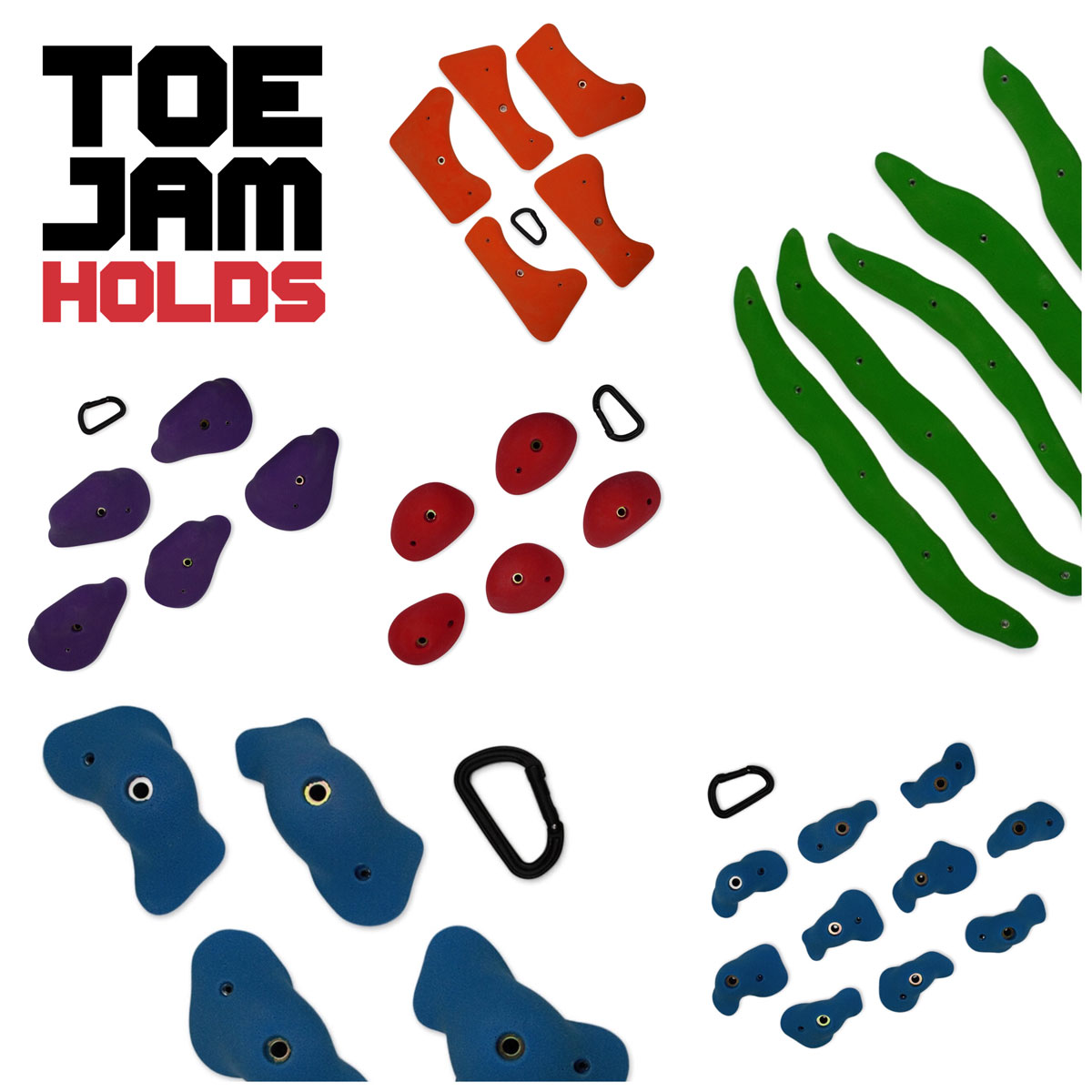 Toe Jam Holds has been around for a long time, but now Christopher Neal of Capital Climbing is re-launching the brand with six new comprehensive lines planned to range from colossal to small in size. First up will be the Cobbles (shown in red), which are round sloping spheres of varying positivity; the Fluffy series (purple), which are a series of positive jugs; the Plush and Simp lines (both in blue), which will be a series of pinches and crimps; the Flush series (orange), which feature low-profile edges and rails; as well as the Homage series (shows in green), which is a series of screw-on rails. And stay tuned, because more releases are coming soon. The brand will be poured by Proxy / Vertical Solutions. https://toejamholds.com 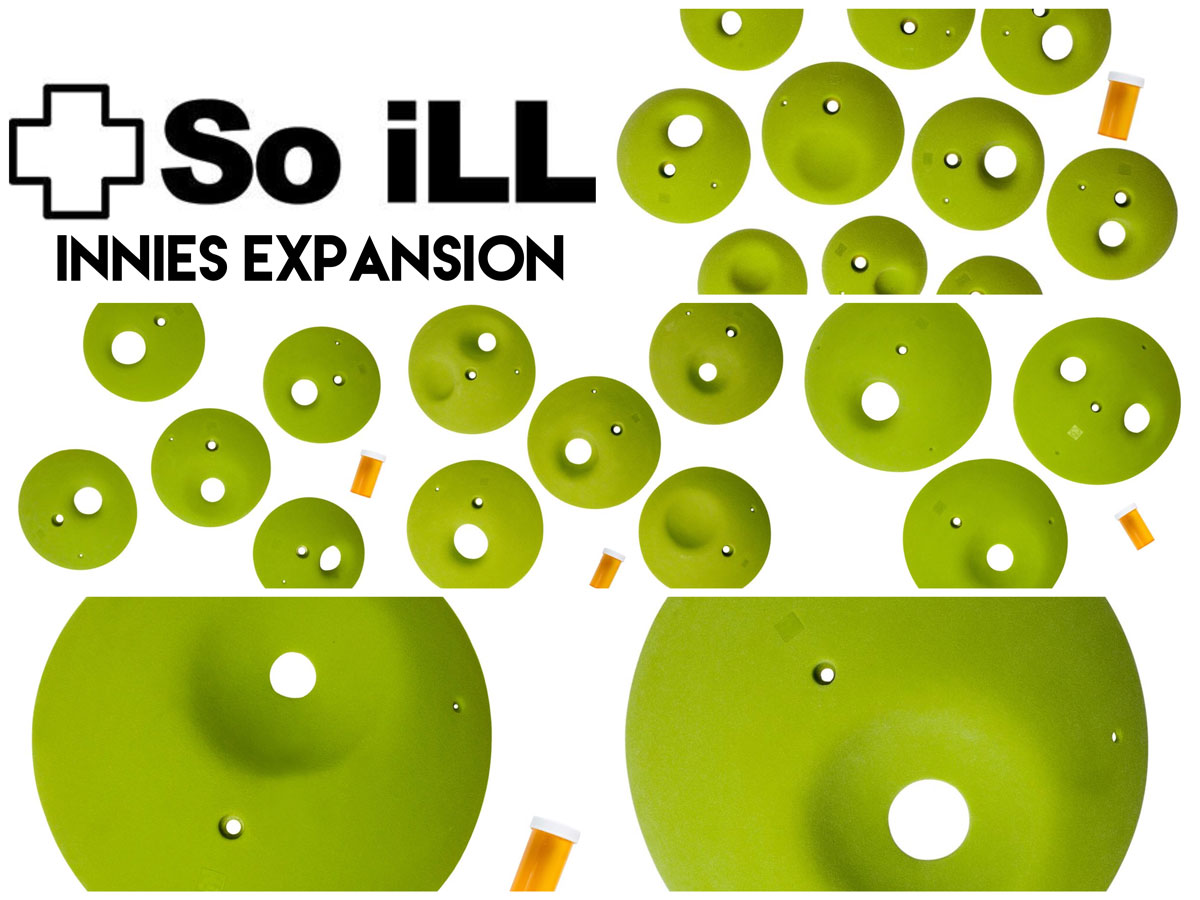 So iLL is releasing an expansion to the Innies, the spherical sloper set shaped by Jason Kehl. The original Innies have been seen in climbing gyms all over, and the new sets will give routesetters and climbers even more options. https://soill.com 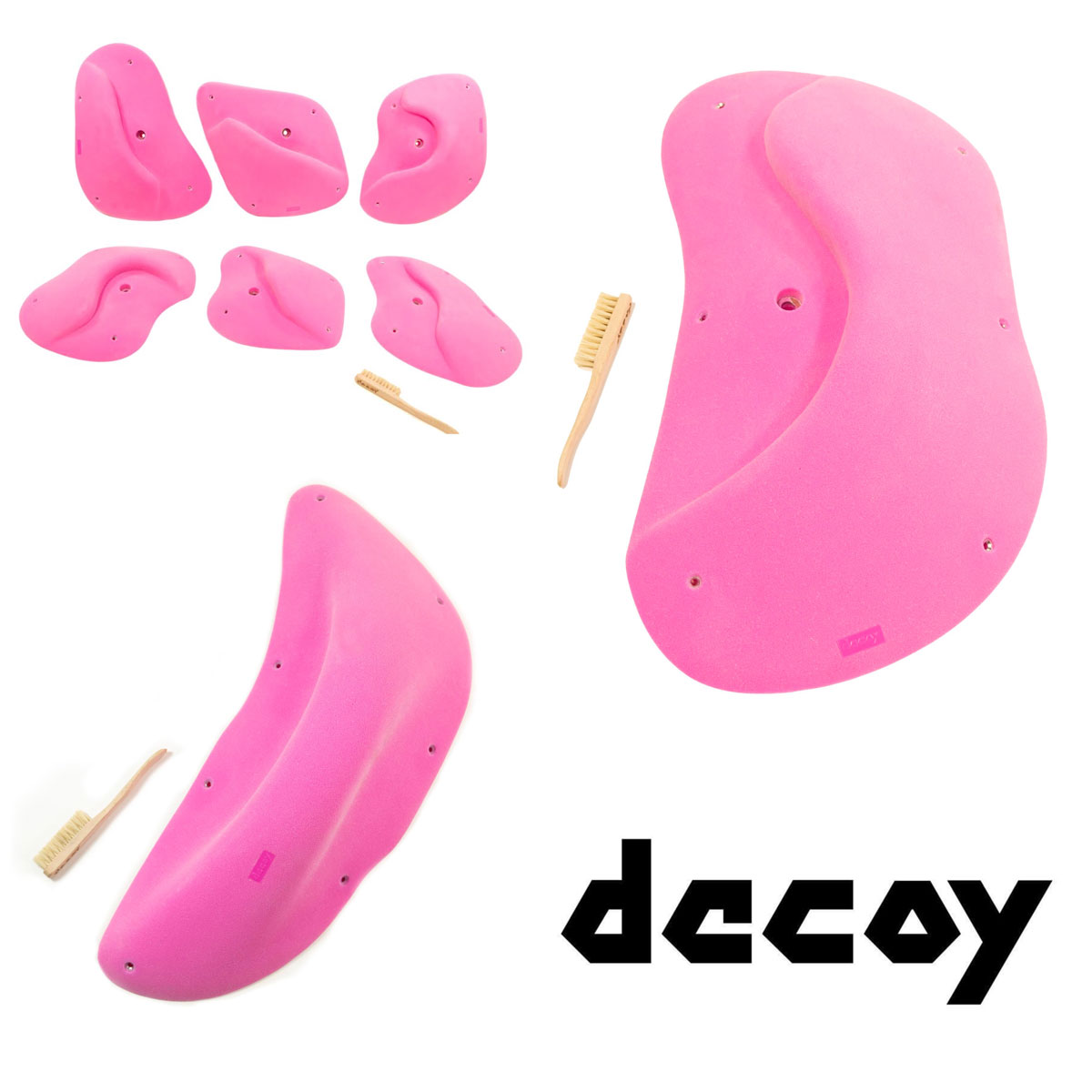 Decoy Holds dropped three new sets shaped by Dan Yagmin, which are expansions of the existing Rollie family. The new releases feature the 2XL and 3XL positive-lipped Rollie Rails and the Rollie Scoop B.  More Rollie sets as well as other new lines are planned for release soon. https://decoyholds.com 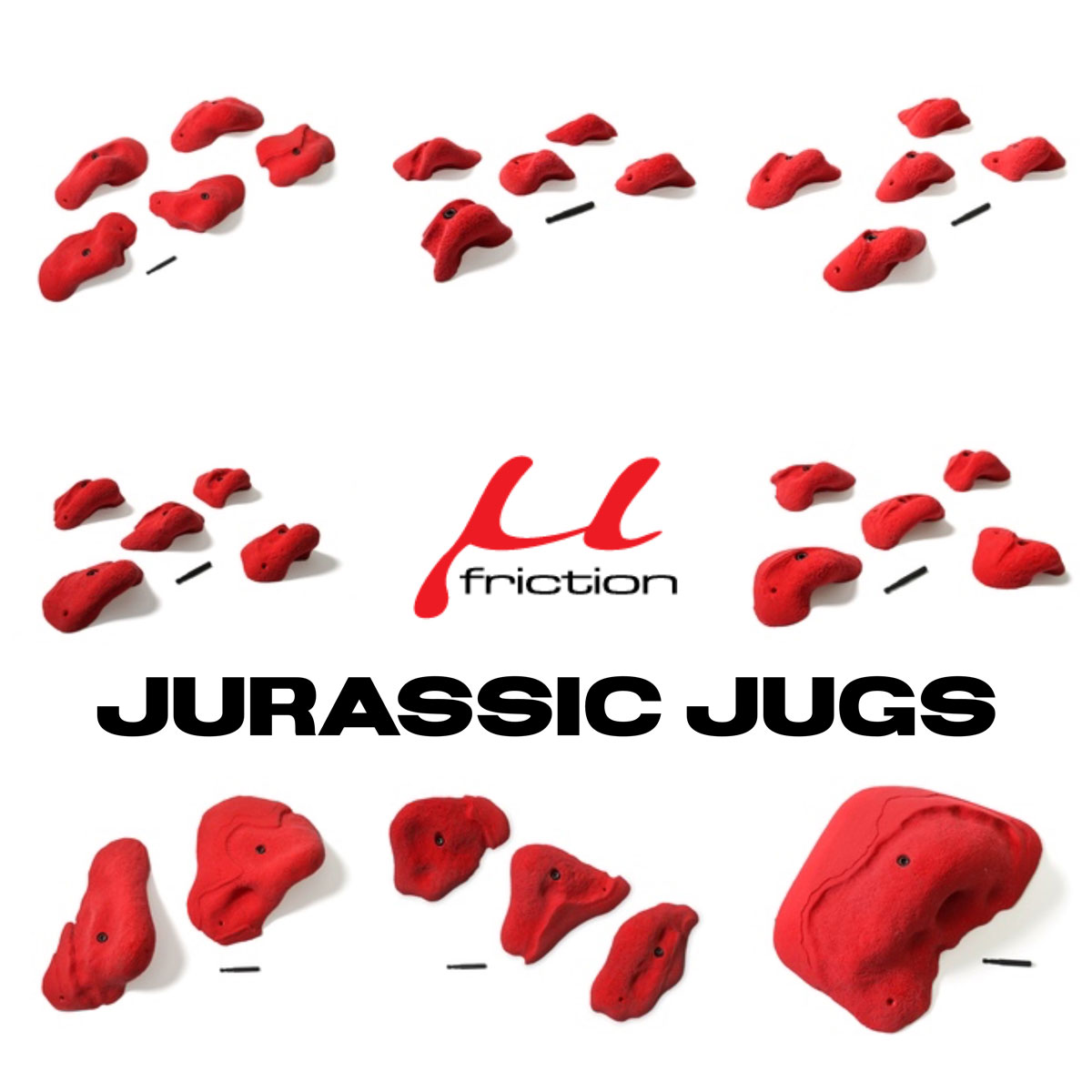 Friction Holds is a Canadian-based company that is manufactured and distributed by the Escape Climbing family. September saw the release of the new Jurassic Jug series, created by an anonymous well-known shaper. This line features jugs ranging in size from small to mega and currently is comprised of 36 holds. https://frictionclimbing.com 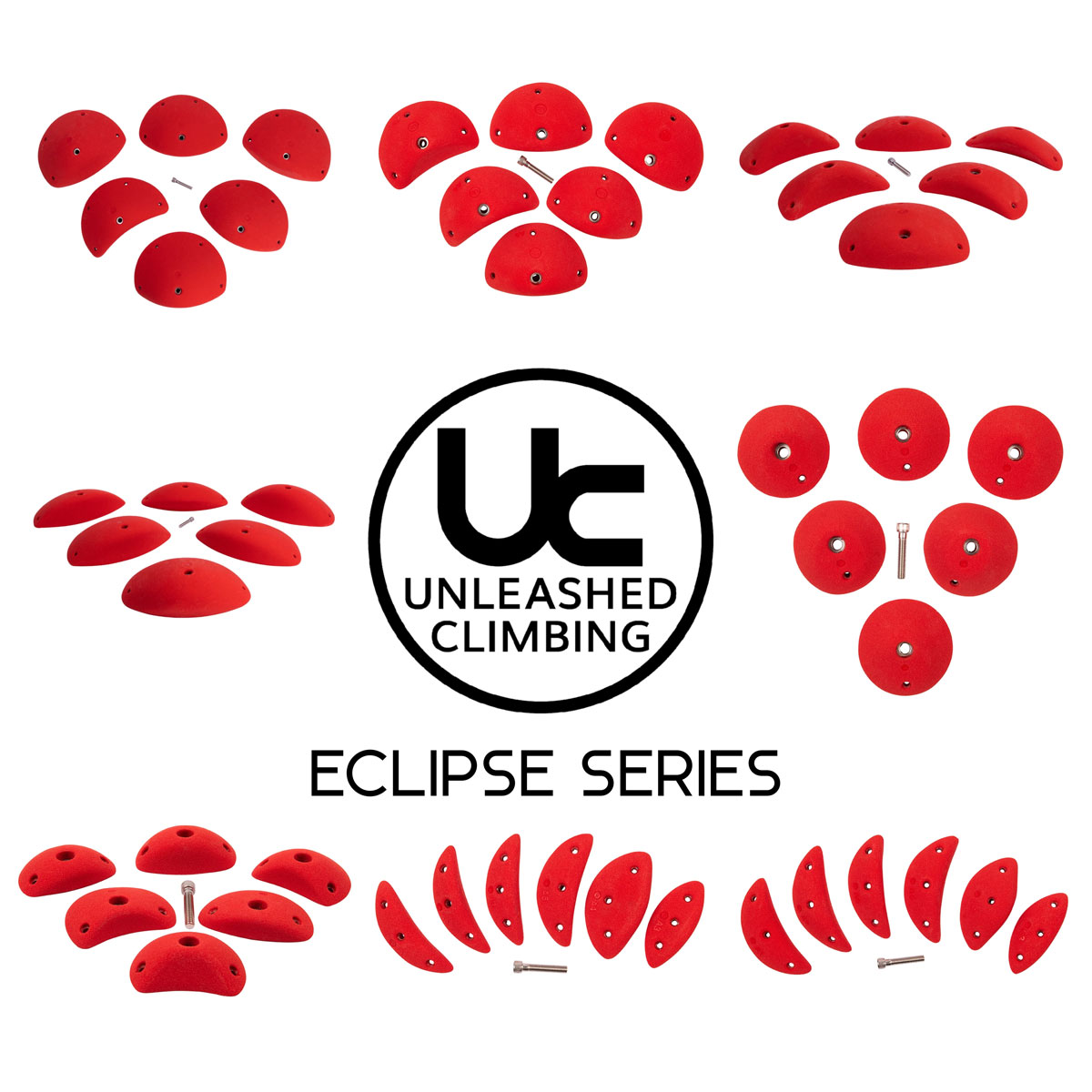 Unleashed Climbing owner and shaper Will Watkins has had an interesting Covid-19 experience. He is actually stranded in Europe away from his home in Australia at this very moment. He appears to be making the best of it though, as his brand recently unveiled a brand-new website featuring four flagship lines. Released this month is the Eclipse series, which features a series of Moon-like slopers and edges, with associated blocker sets. These blockers create interesting seams and variable depth edges for thought-provoking climbing. https://unleashedclimbing.com 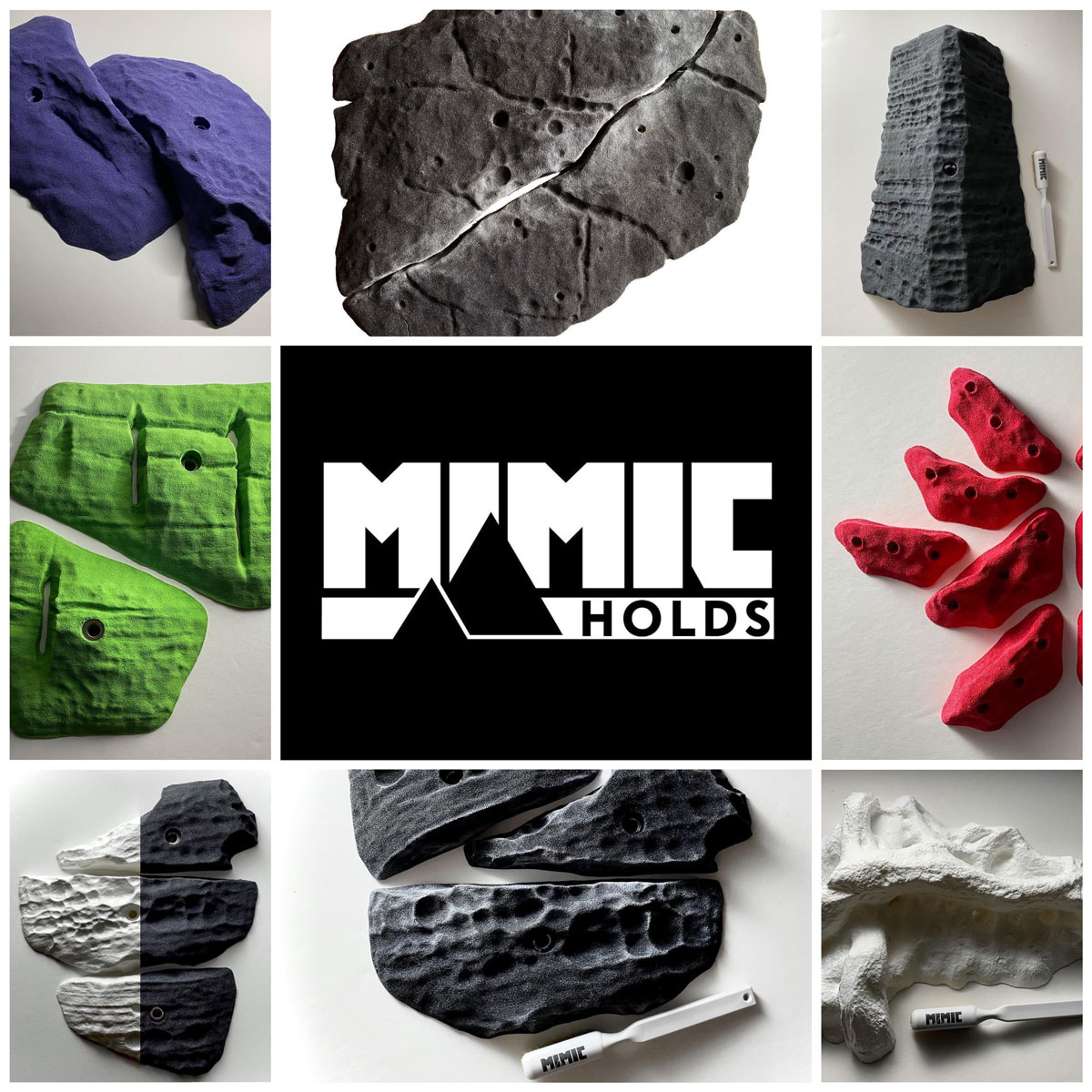 Mimic Holds is owned and operated by Clayton and Cole Hardacre and uses 3D scanning and 3D printing to replicate outdoor rock climbs. The two brothers founded the company in 2018 and have developed technologies that use the 3D printing approach to meet the quality standards of modern climbing holds. Recently they released several new sets, including classics from Joe’s Valley boulders such as Slasher, Gurkha Knife Pinch, Area 51, Zoolander and several jugs and aretes from the area. They also released a series of 10 crimps scanned from Red River Gorge classic Pure Imagination (5.14c). https://mimicholds.com 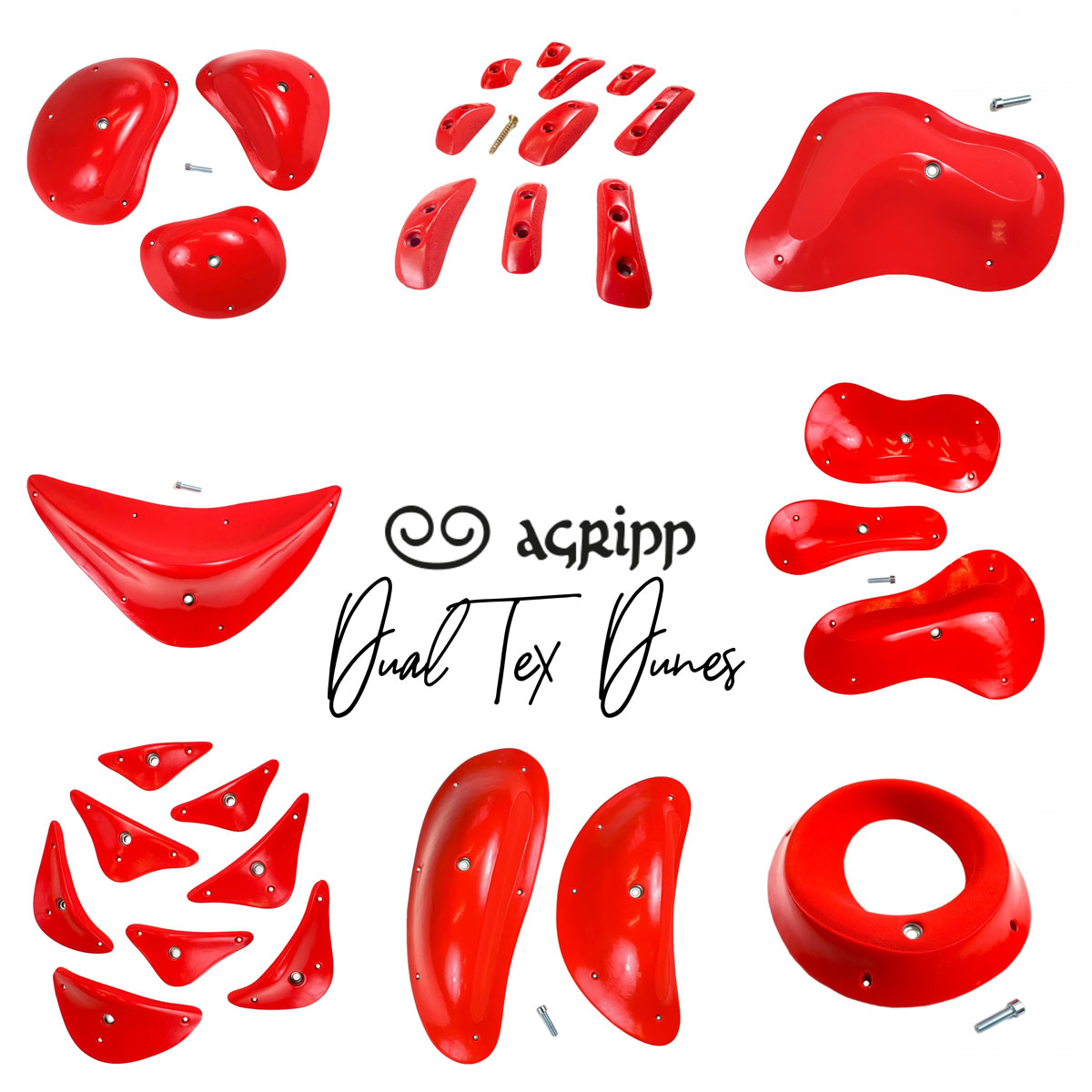 Agripp is a European-based climbing hold company based out of Belgium. Recently they released their Dune Full Texture and Dual Texture series, which feature a comprehensive line of holds of just about every size and type. Agripp holds are distributed by Holdtopia in the United States. https://agripp.com 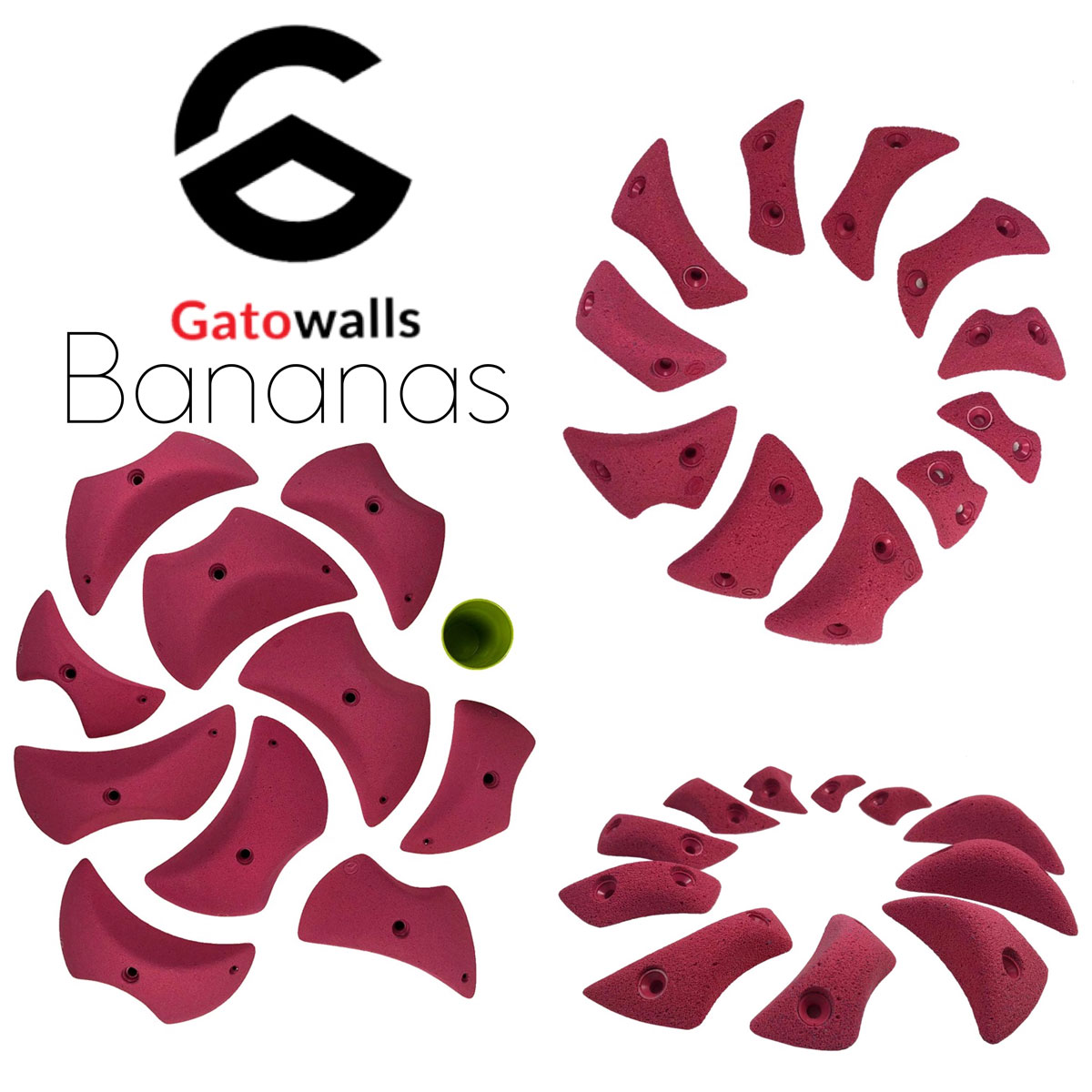 Gatowalls is an up-and-coming climbing hold / macro / volume / training equipment and climbing wall producer out of Poland. Recently they released many new holds, macros and volumes which featured in previous CHNR Monthly Grips Wraps. This month they release the Bananas, which are a series of sleek screw-on / bolt-on pinches varying in positivity. https://gatowalls.com 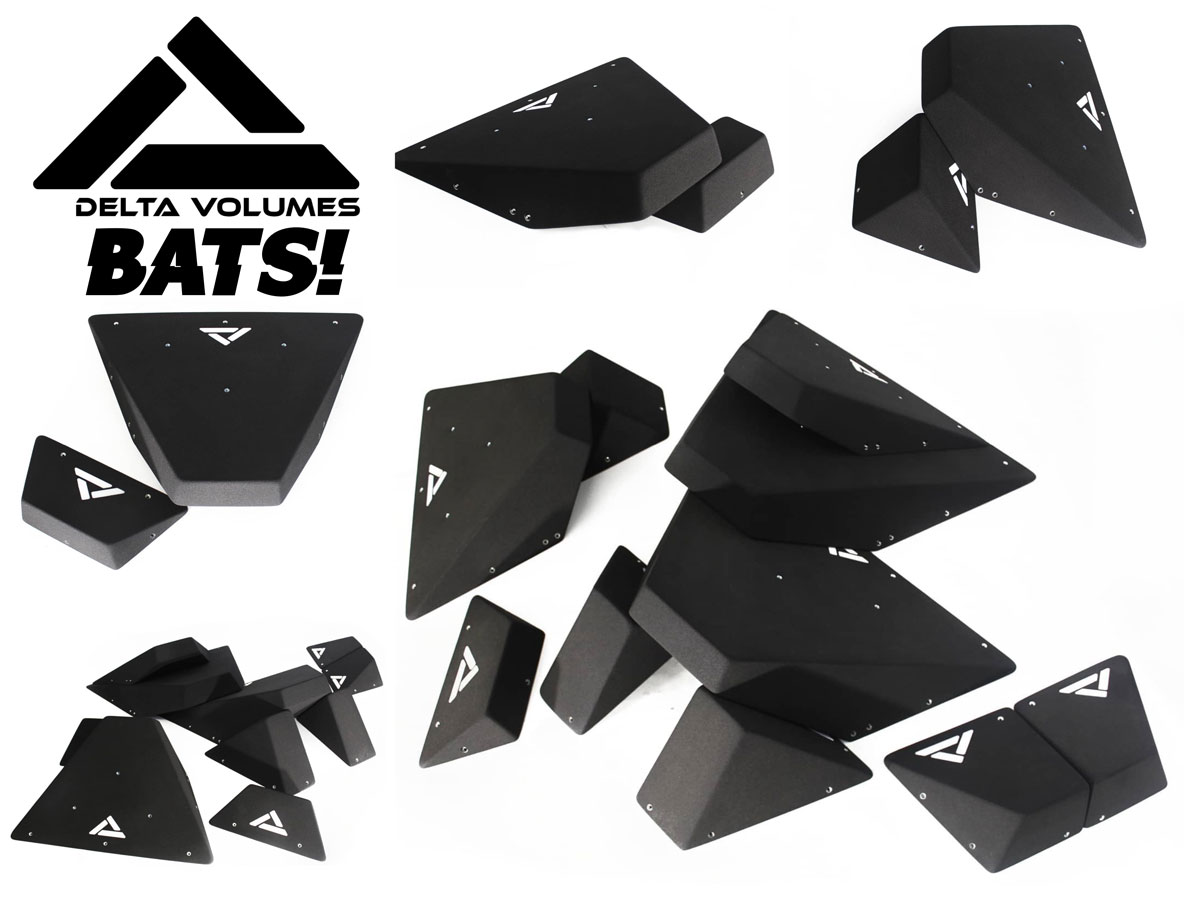 Delta Volumes is a newer brand which is releasing plywood climbing volumes as well as polyurethane macros. They recently released the puzzle-piece-like Bats series, which features angular wood volumes with a complementary blocker piece. The combinations are virtually endless, so they can be used to create jugs, crimps, pinches, seams, bathangs, etc. Check them out on Instagram or Facebook at @deltavolumes. A website is forthcoming.

Be sure to visit climbingholdnewsreviews.com for even more updates and new releases on a weekly basis. Thanks for joining us!  We’ll see you next month!