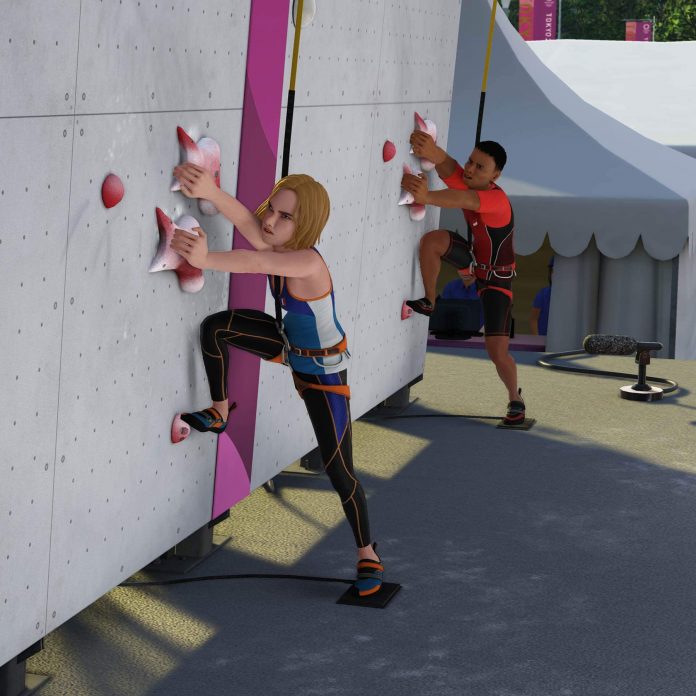 One month before the start of the Tokyo Olympics, the official video game of the event will be released internationally on June 22. The Olympic Games Tokyo 2020 – The Official Video Game™ by Sega first launched in Japan in 2019, one year before the Games were initially scheduled to take place. Sport climbing was later added as a free update in February last year, and now gamers around the world will be able to compete for gold in climbing’s first Olympics.

Of note is that fans will be disappointed if they’re expecting to play across all three climbing disciplines. Although the event in the video game is called “sport climbing,” the action solely consists of speed climbing. Still, the trailer for the game does show some realistic elements of speed competitions. The holds mimic the official speed holds (although they won’t be lighting up in Tokyo as in the trailer), and the characters are clipped into auto belays throughout their ascent of what appears to be the 5-degree overhanging, 15-meter wall (except the route to the top differs from the official speed route). There’s even a starting and finishing pad, based on initial screenshots.

Also interesting will be the characters in the game. In the international version, gamers will be able to create a “dream team” of astronauts and pirates, but even better critics might say would be playing as the actual Olympians climbing in their actual uniforms. When climbing was first added to the game in Japan, it was possible to play as Japan’s star climbers Akiyo Noguchi and Tomoa Narasaki. It’s unclear whether Akiyo and Tomoa―and other athletes on the roster―will be in the international version.

Nevertheless, climbing’s appearance in the game is another indication of how climbing is entering the public eye around the Olympics. The concept of a video game also corresponds with the International Olympic Committee’s objective to “encourage the development of virtual sports and further engage with video gaming
communities,” as outlined in its Olympic Agenda 2020+5. In April, the IOC announced its first-ever Olympic Virtual Series―involving both physical and non-physical virtual sports―in the lead up to Tokyo.

The Tokyo Olympics are scheduled for July 23 to August 8, with the climbing portion of the event happening on August 3 to 6. The trailer for the official video game can be watched below.