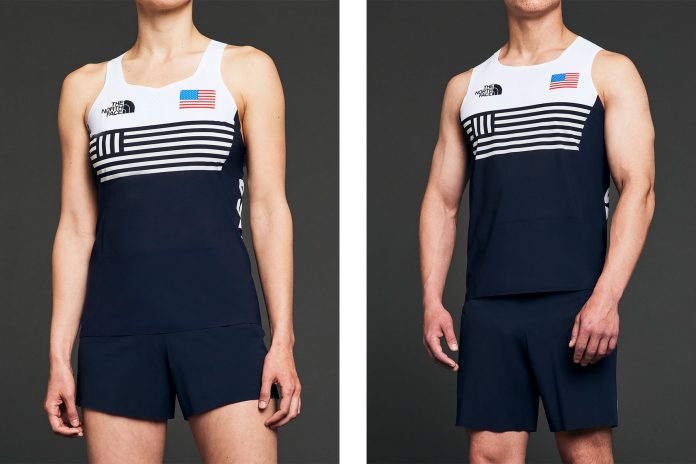 The North Face recently unveiled the official climbing uniforms, which the American Olympians will wear at this summer’s Tokyo Olympics. Similar uniforms by the brand will also be worn by competitors from Japan, South Korea and Austria.

According to a press release, the American uniforms and kits were inspired by “Swiss design” and minimalism, and are “grounded in simplicity and boldness.” The uniforms incorporate the American flag in a Swiss grid system; the uniforms of the other countries incorporate their respective flags as well in a similar manner. Erica Cottrell, Design Manager of Climb at The North Face, said, “While we sought to first create an extremely lightweight and breathable design, we also wanted to produce a design that honors the bold and timeless heritage of The North Face as well as the unique spirit of each federation.”

The uniforms were created with the help of a 4-D scanner, which closely monitored athletes’ movements—and shoulder and hip articulation—during the research and development process. American climbers Margo Hayes, Ashima Shiraishi and Nathaniel Coleman were among the athletes who provided feedback on everything from fabric and materials to design, kit weight and construction. Laura Akita, Product Manager at The North Face, specified that the insights from the athletes “allowed [The North Face] to create a kit that incorporates the lightest, most breathable fabrics while also providing range of motion to match the unique needs of climbers.”

Coleman, in particular, is one of the four Americans (along with Brooke Raboutou, Kyra Condie and Colin Duffy) who will compete at the forthcoming Olympics. “As a climber, one of the most important aspects of your gear is that it doesn’t weigh you down on your way up the wall, and these uniforms truly feel like you are wearing nothing,” said Coleman. “Being able to participate so deeply in the development of these uniforms was such a unique experience, and the end product is [a] finely tuned product [built] for the specific needs of those competing this year in Tokyo.”

The Tokyo Olympics will feature a unique Combined discipline (featuring bouldering, lead climbing and speed climbing, all under a singular “sport climbing” banner). Thus, the fit and function of the uniforms and kits varies for the different types of climbing. For example, the kit designed for speed climbing is more form-fitting.

Steve Lesnard, Global Vice President of Marketing at The North Face, stated, “As a longtime supporter of climbing, we take great pride in not only designing the first competition uniforms but, more importantly, in having the opportunity to celebrate the next milestone of the sport. As climbing is introduced on the ultimate global stage this year, the opportunity for athlete recognition is monumental and we are honored to continue to be a part of the growth of the sport and to celebrate the united spirit that these games will represent after such a trying year.”

Stay tuned to CBJ for up-to-date news and information on Team USA’s climbers as the Olympics approach.