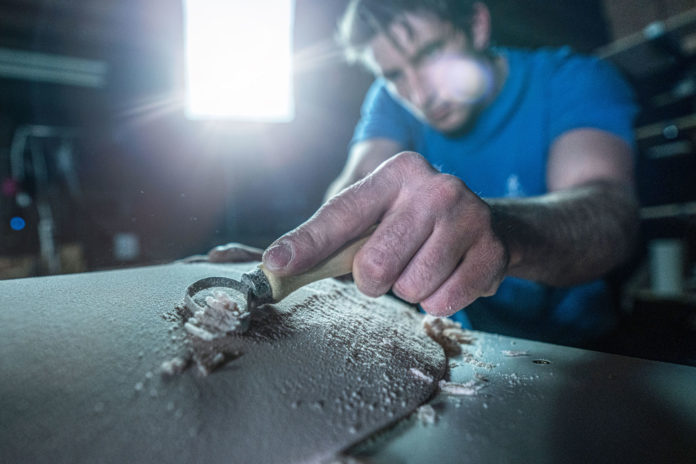 During a recent Ask-Me-Anything session on Outdoor Research’s Instagram account, American star Sean Bailey was asked whether he has done any shaping for a climbing hold company. In replying, Bailey said, “I’ve been shaping for Pusher. Should have some holds coming out in the near future! It’s a new addiction.”

CBJ reached out to Pusher’s owner Jared Roth for more details. The company seems to be staying fairly tight-lipped on the collaboration for now, but Roth did confirm that Bailey is indeed working on some holds, as is American star Ben Hanna. In fact, it was Hanna who initially brought Bailey to the Pusher headquarters. A recent post on Pusher’s Instagram, as well, confirmed new shapes from the two athletes are in the works.

Roth told CBJ, “Pusher does not comment on product or product relationships prior to our new product introductions. We are committed, however, to being one of the safe places for talented climbers to gather in a very private, relaxing and nonjudgmental space.”

In terms of being talented climbers, Bailey’s most recent achievement was winning a Bouldering World Cup event in Salt Lake City on May 30; Hanna took part in the World Cup event as well, and previously won the Battle of the Bay event of the 2019 National Cup Series.

In shaping holds, both Bailey and Hanna join a distinguished group of elite Americans (including Jimmy Webb and Alex Puccio) who have parlayed great climbing success into creating holds. The template—at least in the United States—was arguably first established by Jim Karn, whose line of “Monster Holds” for the California-based company Climb It became incredibly popular while Karn was one of the best Americans competing on the circuit in the early 1990s.

Talented climbers who have shaped for Pusher in the past include Boone Speed, Mike Call, Jason Kehl, Jake Slaney, Steven Jefferey, Jared Roth himself, and many others. Of that distinguished group of Pusher shapers, Bailey is the only World Cup gold medalist.

“We are very happy for Sean and celebrate his wonderful performance in the World Cups last week along with those of his USA teammates,” Roth added about Bailey.