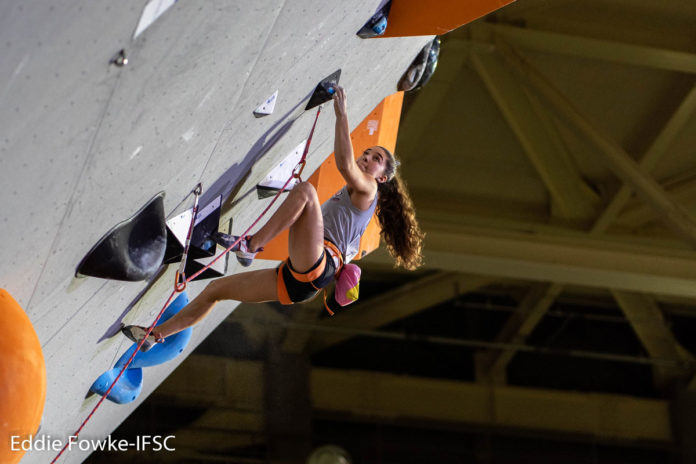 History was recently made at the IFSC World Championships in Hachioji, Japan, as 18-year-old Brooke Raboutou (USA) and 31-year-old Sean McColl (CAN) became the first ever American and Canadian climbers to qualify for an Olympic Games. McColl and Raboutou were among six men and six women to provisionally earn a berth to the upcoming Olympics in Tokyo, taking place next summer.

Raboutou, a native of Boulder, Colorado, and a product of the training at ABC Kids Climbing, has been a well-known name in competitions from a young age. Born to decorated competitors Didier Raboutou and Robyn Erbesfield, Brooke Raboutou quickly carved out an identity of her own with victories on the national and international circuit. Most recently, she won a youth world championship in lead climbing last year and earned a spot on the American Overall National Team earlier this year. She has also been active on the IFSC’s World Cup circuits.

At the IFSC World Championships, McColl and Raboutou’s Olympic berth came as a result of their performances in the qualifying round of the “combined” discipline. The discipline multiplies scores from separate speed, bouldering and lead portions. Raboutou placed 6th in speed climbing, 10th in bouldering and 7th in lead for an overall placement of 9th. McColl placed 18th in speed, 15th in bouldering and 3rd in lead to finish in 10th place overall. A cap of two men and two women per country receiving the Olympic invitations — and an abundance of Japanese competitors—meant that Olympic slots ultimately went to McColl and Raboutou.

Soon after, Raboutou wrote on her Instagram, “In a few days I should get a letter with my ticket to the 2020 olympics!!!”

“I have had the dream of going to the Olympics since before I can remember; that becoming a reality now, in the sport of climbing that I love so dearly is just…unbelievable,” wrote McColl on his Instagram.

McColl and Raboutou’s Olympic qualification leaves at most three spots for the USA and three spots for Canada on the Tokyo 2020 roster. The next competitions with Olympic qualification implications will take place in Toulouse, France, in November, with Continental Championships around the world to follow next year. A total of 20 athletes per gender will eventually take part in climbing at the 2020 Olympics.