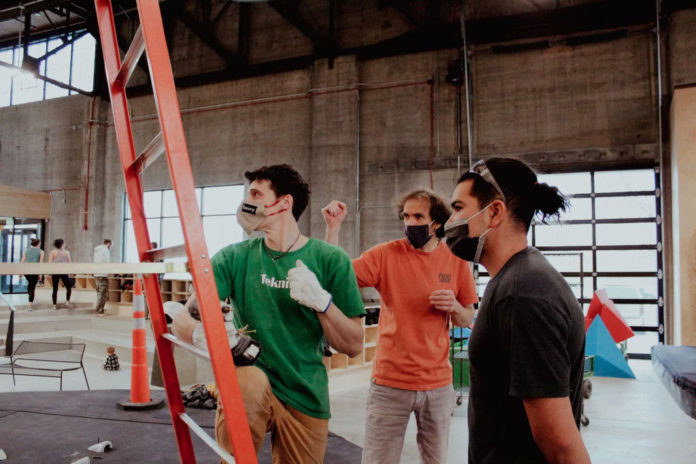 Behind the Impact is a series that explores current routesetting topics in conversation with the head routesetters of the industry. In this first installment, author Devin Dabney―a previous head setter himself at Nike Rock Gym, co-founder and host of the American Climbing Project, and all-around jack-of-all-trades in the climbing industry―catches up with North Mass Boulder’s Head Routesetter and longtime friend Thomas Bonifield about the popular RIC Scale and how to leverage it in your routesetting work. Want more routesetting content? Be sure to check out our Ask a Setter and Behind the Wrench series as well.

Grades in climbing have always been a frequently discussed subject―especially in a routesetting space—and one of the things that makes grading challenging is a lack of language around how to describe climbs. Simply saying a climb feels “hard,” “easy” or even “crimpy” doesn’t encapsulate the complexities that comprise climbing, and breaking down those intricacies can go beyond hold choice, style and wall angle too. As the routesetting profession continues to develop, the need for more precise, intelligible conversation around grades becomes more and more necessary―which is likely what led to the RIC Scale’s creation by setting legends Tonde Katiyo and Jacky Godoffe, who discuss the scale in the book My Keys to Routesetting. Possibly the most prominent tool used to talk about grades amongst setters, the RIC Scale can be a valuable resource for any commercial setting program―if you know how to use it.

Thomas Bonifield knows this scale very well; he’s used it in commercial gyms, competitions and other setting events and, as the current Head Routesetter of North Mass Boulder in Indianapolis, he still uses it with his team today. When we first worked on the same setting team in 2014, such a scale was unknown to us, and we more or less had to rely on our best guesses. Needless to say, the setting profession is in a much different place eight years later, and I was excited to hear what he had to say.

What Is the RIC Scale?

“RIC represents three parameters: risk, intensity, and complexity,” explained Bonifield. “Each of these parameters can be assessed on a scale of 1 to 5 (with 5 being the highest value), and the result is a far more faceted assessment of a climb.”

Bonifield also noted that these 1-5 RIC values are relative to the target audience, meaning that if a V3 climb is rated a 5 in Complexity, a V3 climber should find the problem particularly difficult to decode; climbers at the V1 or V5 levels, on the other hand, will have a completely different experience of that climb’s complexity. (While I will use boulder grades in my examples, the RIC Scale can also be used for roped climbs.)

Additionally, the three RIC values can be averaged together to assess the overall difficulty of a problem on the same 1-5 scale (with 5 being a problem that’s incredibly difficult for the grade). For example, a climb with RIC values of 2-4-3 would average out to 3, meaning this climb has slightly above-average difficulty for the grade. ​​“It all depends on the level,” Bonifield said. “What’s easy for me may be hard for others and what’s hard for me may be easy for others. It goes back to talking about the user and their experience.”

Below is a depiction of how assessing RIC might work, with some hypothetical boulders I set:

As a routesetter, understanding how to adjust these three factors in a climb is invaluable—whether you use the scale or not. Here are just a few ways to dial each parameter up and down:

“Risk is more of a mental challenge and focuses on the commitment level of the climber,” said Bonifield. It relates to how ‘scary’ a move feels, as well as how low-percentage the movement is or if the climb has a ‘point of no return’ where downclimbing on-route is unfavorable, or near-impossible. Some high-risk movements and climbing qualities include the following: dynos; no-hands climbing; slippery, dual-textured footholds or handholds; low-percentage handholds, such as pockets or slots; sparse holds (particularly on a slab wall).

“Intensity focuses on the physicality of a single move or entire boulder,” explained Bonifield. This is how most climbers describe ‘hard’ climbing; it solely relates to the physical ability, power or grit required to finish a climb. High-intensity climbing can focus on challenging holds—such as crimps, slopers, pockets or pinches—but it can also focus on how demanding the movement is. This can include arm-intensive movements such as lock-offs and campusing, or movements requiring flexibility such as high-steps, hand-foot matches and stemming.

To quote Bonifield, “Complexity focuses on the puzzle aspect of the boulder and how difficult it is to figure out.” This is not just about how complicated a climb’s sequence is, but how difficult that sequence is to execute. Coordination movements such as run-and-jumps or double clutches are often used in competition settings, but nuanced, specific footwork―such as heel hooks, toe hooks or backflags―are also common ways to add complexity. Setters can also make use of specific hand sequences that require bumps, crosses or rose moves.

There are several advantages to using the RIC Scale in commercial setting environments—both for your setting teams and the end-users. Bonifield and I discussed a few ways to leverage this tool at your gym:

1. Keep Everyone on the Same Page

Communication is key for routesetting quality control, and oftentimes as routesetters we work with setters we’re only meeting for the first time—be it for gym openings, community events or competitive events. The RIC Scale can act as a Rosetta Stone for these interactions, allowing us to discuss climbs with other setters regardless of where we’re from. Bonifield just experienced this in February, when his gym hosted a USAC Divisionals Youth Competition. “We used it when we were setting the most recent youth divisional comp,” he told me. “The chief of the event wanted to use it as a tool to talk about boulders in a productive and efficient manner.”

Another big benefit to having the RIC Scale in your toolbox is its usefulness as an educational instrument for your setting team’s development. When reviewing his teammates’ climbs, for instance, Bonifield can see if they prefer a particular ‘style’ of setting based on their RIC values, and where they may have room to grow. As a head setter, I’ve done an exercise with my team where each person had to set their assigned climbs based on randomly-generated RIC values; this is not just a fun creative exercise, but one that also challenges setters to think differently about difficulty. (What does a low-risk/high-intensity climb look like, versus one that’s high-risk/low-intensity?)

The RIC Scale also provides an opportunity to see your gym’s grading in a new light, and perhaps encourage a change in how some climbs are graded. For example, if you’re relying too heavily on intensity when choosing V grades, some V2s that are still more challenging in terms of risk and complexity may be better off as V3s. I’ve personally seen setters fall into this trap, setting problems that “feel” easy physically but have movements that are very risky for newer climbers (such as an ‘easy V2’ with a heel-toe cam—yes, that actually happened). “The RIC scale is used to help setters discuss and tweak climbs efficiently,” explained Bonifield. “It allows setters to step back from the conversation of a V-grade and go more in-depth about how risk, intensity, and complexity affect the difficulty of the boulder in regards to the user.”

Bonifield’s team not only uses the scale to discuss grades but also keeps meticulous track of the values in their setting distribution. “We currently use the scale when we are setting and planning for upcoming sets,” he explained. “At the end of the setting day, the RIC values are recorded in Plastick/Kaya to help look at the balance of each circuit.” This means that, as a head setter, Bonifield can observe not just how difficult each climb is, but the average difficulty of each grade range. He can see if the V2s are a little too stiff, if all the V7s focus on Intensity, or if the gym overall is lacking risk-heavy climbs.

When creating a climb for a target audience―whether new or more experienced climbers, youth comp team athletes or weekend warriors―setters must visualize the climb through the intended user’s eyes, and keep track of the things that will be challenging for the intended user’s ability level. For example, what a V0 climber considers as ‘risky’ or ‘complex’ will be vastly different than what a V8 climber thinks as such. “I think one of the pros of the RIC scale is that it focuses on the intended user, and helps setters look at how and why specific dimensions of the climb affect the difficulty level,” said Bonifield. “It goes back to talking about the user and their experience.”

6. Pair It With Other Routesetting Language

It’s without question how useful this system is for discussing challenges, analyzing setting, and looking at a gym’s distribution. However, Thomas and I agree that in a regular day of setting, it’s not something that always comes up—or needs to. He made sure to emphasize it was not the only tool he and his team used. “I feel like RIC can leave out some other measurables…dynamic/static movement, force, technique, and coordination are a few other ways to discuss difficulty…but overall, it’s pretty easy to use. I think it’s useful as a conversation tool, but [it’s] not necessary all the time,” concluded Bonifield.

While essential for any developing routesetter to know, it’s better used as a fine-toothed comb rather than a workhorse. We think it’s best to keep a balanced approach when discussing difficulty, but the RIC Scale is a pretty handy thing to have on your routesetting tool belt—almost as handy as a combined hex/star bit. Almost. 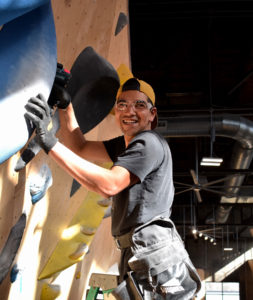 Thomas Bonifield is the Head Routesetter of North Mass Boulder in Indianapolis, Indiana. He is primarily based in the Midwest, having set in over a dozen locations in that region over his decade-long setting career. He has helped open several gyms and has set for numerous USAC competitions, including the 2020 Youth Boulder Nationals. He loves being a leader in the setting world and is particularly passionate about breaking down barriers for routesetters of various genders, races, and backgrounds.

Thomas is a member of the Hopi Tribe in northeastern Arizona and is of Hopi, Iranian and Black descent. He’s focused on Indigenous culture, protecting our natural resources, and traveling to learn about other cultures. He also is an avid sports fan and has a really cool haircut.

Devin is a professional podcaster, writer and music producer who lives in Indiana. In addition to CBJ, he also writes for The Climbing Zine. Devin has spent over a decade working in the climbing industry in a variety of roles, including head routesetter, competitive youth coach, personal trainer, event coordinator and community ambassador. When he isn’t making music, climbing, drawing or traveling, you can usually find him playing video games or grabbing a beer with his friends.