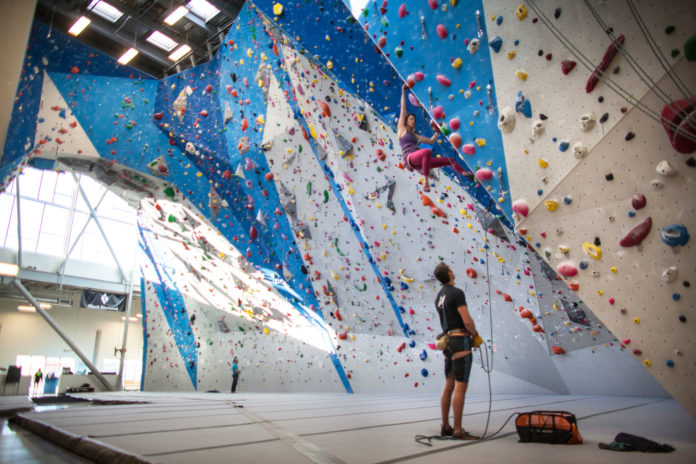 Specs: Momentum Millcreek opened in 2014 in a suburb outside of Salt Lake City, marking the business’ first expansion. CEO Jeff Pederson, with the help of several partners, opened the first Momentum location in the area―Momentum Sandy―in 2007. “Drawing on their previous experience at The Quarry climbing gym in Provo, Utah, Momentum’s founders envisioned a next generation climbing facility with tall sweeping walls and lots of natural light,” Millcreek General Manager Curran Lemp said about the Sandy gym, which was actually Walltopia’s first climbing gym build stateside. Since then, Momentum has expanded to six facilities in total: three in the SLC area, two in Houston, and one in Seattle.

The Millcreek location, although it was not the first Momentum gym, was described by Momentum’s Operations Director, Chris Macfarland, as the “flagship” facility. “It’s big, it’s busy, it offers a huge variety of climbing,” Lemp elaborated. “It’s the feeling you get walking in the front door.” Upon entering, climbers see a 53-foot lead wall that’s framed by a 40-foot arch and a plethora of windows. Surprisingly, the Millcreek gym was built in a former grocery store which Lemp identified as “an unlikely building to house a climbing gym.” It took some adjustments to make it all work, including raising part of the roof from 25 to 55 feet.

Millcreek features +180 lead routes and +100 boulder problems, as well as youth programs (birthday parties, camps, teams) and various classes that teach “How to Project a Sport Climb” and “Transition to Outdoors.” The “Crack Climbing” class, in particular, is made possible by all the cracks in the facility―spanning from fingers to large hands in width―which Lemp described as “53 feet tall and almost perfectly parallel to stimulate desert sandstone.”

A big part of Millcreek’s offerings, though, arrived more recently. In 2019, the gym’s footprint increased by 60% when Momentum acquired the 16,000-square-foot space next door, a former fitness facility. Besides bringing in new bouldering terrain, the expansion―which completed in 2020―made room for a specific training area, a yoga studio, a multipurpose room, bigger locker rooms, and an expanded traditional fitness room. “Additionally, we gained some open floor space which we needed to let the gym breathe a little,” Lemp added, noting the changes have helped the gym cater to a slightly younger crowd. “We are seeing more students and young adults who are curious about the sport and want to give it a try.”

Now a 40,000-square-foot facility with 28,150 square feet of climbing surface―including a 15-meter speed wall―Millcreek has had more room to host high-level USA Climbing competitions, following the Combined Invitational that Millcreek hosted with Momentum Lehi in 2019. Last year, the upgraded gym was the site of both Paraclimbing Nationals and Lead/Speed Nationals, and in February this year Millcreek hosted a Collegiate Qualifying Event in lead and bouldering.

In Their Words: “The amazing climbing experience offered to our communities is the foundation of our success and continues to fuel Momentum’s growth…Every day, we are creating hundreds of great climbing experiences for everyone, from 3-year-olds to 5.14+ climbers. The routesetting stays fresh, the gym stays clean, our staff are notoriously friendly―all of which creates a welcoming and fun environment for everyone. Achieving that consistent positive experience for so many different types of climbers, every day, is something we excel at.” – Curran Lemp, Millcreek GM