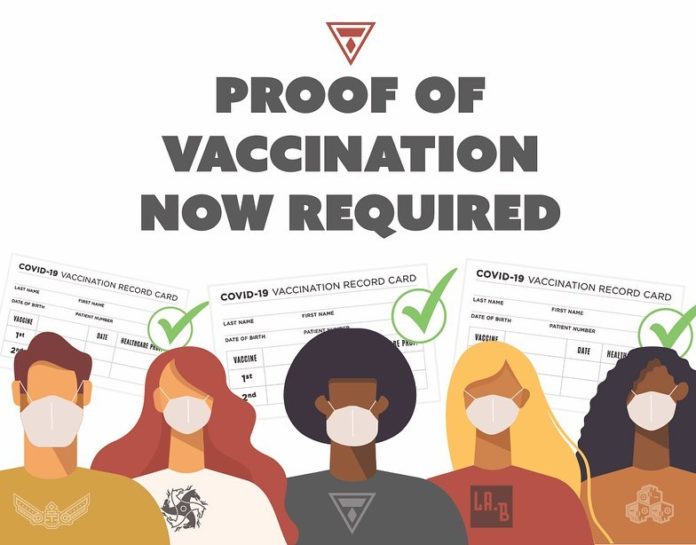 Required COVID-19 vaccination has been talked about in the climbing gym industry since well before vaccine rollouts began. At the start, though, questions circulated on whether businesses could require vaccination for employees or customers and the legal ramifications for doing so. Now, in many regions around the world, proof of vaccination is required to work at or access indoor businesses―including fitness centers and climbing facilities.

As required vaccination arrives in the industry, here’s a roundup of where things currently stand for climbing gyms in the United States, Canada and internationally.

Climbing gyms in New York City were the first in the US to learn they would have to navigate vaccination mandates, as part of the “Key to NYC”. Announced on August 3 and started on August 17, customers and employees 12 years or older have been required to show proof they’ve received at least one dose of an approved vaccine to engage in indoor activities like gyms. There was a grace period, and enforcement of the local NYC mandate did not begin until September 13. Accepted forms of proof are photos/copies of CDC/NYC vaccination cards, whether by paper or via CDC/NYC apps.

Gyms haven’t been required to verify proof of vaccination in a particular way, but they are encouraged to have a written implementation plan in place, in case of inspection. Climbing gyms across the NYC metro like Brooklyn Boulders, MetroRock, The Cliffs and VITAL facilities in NYC have all communicated policy changes on their websites. VITAL Brooklyn, in particular, is giving out bracelets to members who have shown proof of vaccination. Similar to belay cards, members with bracelets don’t need to have their status repeatedly checked.

Similar mandates have been going into effect in major US cities in other regions. On August 12, both New Orleans and San Francisco announced upcoming vaccination requirements. The “Modified Phase Three” restrictions in New Orleans, which went into effect on August 16, require at least one dose of an approved vaccine or a negative PCR test within 72 hours for customers and employees 12 years and older to access gyms. Besides copies of vaccination cards/records, gym patrons can also use the LA Wallet app to show proof. In addition to the vaccination mandate, the city is also requiring everyone to wear masks at indoor businesses, regardless of vaccination status.

Not surprisingly, the policy changes at gyms aligning with their local mandates have not been welcomed by everyone―a trend since the start of the pandemic. Nearly all gyms announcing the requirements online have received some negative feedback alongside the positive. The New Orleans Boulder Lounge, like many gyms, has been emphasizing that they’re “following the rules that have been laid out by the City” and are linking directly to the requirements on the city website. Some gyms have even disabled comments on their Instagram posts, for COVID-related updates.

In San Francisco, gym patrons over 12 years old have been required to show proof of full vaccination since August 20 (October 13 for gym staff). Other Bay Area counties and cities are following suit, and multi-gym chains like Touchstone Climbing have had to navigate shifting developments across them. For Touchstone visitors who would prefer to not show proof every time, they can ask for a note to be put on their account. And fortunately for California gym businesses, capacity restrictions are no longer required since the state lifted its tiered reopening system on June 15.

Soon, multi-gym chains across the country may face vaccination requirements too―this time from the federal government. President Biden recently announced that businesses with 100 or more employees will need their workforce to be fully vaccinated or produce a negative test result on a weekly basis. Whether businesses with 100+ employees spread out across multiple gym locations will be subject to the developing mandate is yet to be seen.

Different than in the US thus far, in Canada required vaccination mandates have already been introduced at the provincial level. Quebec was the first province to do so when its “vaccine passports” began on September 1. Since then, individuals who are 13 years or older―who do not have a confirmed allergy or severe reaction to the vaccines―have needed to show they are “adequately protected” against COVID-19 to enter climbing gyms, although there was a grace period until September 15.

Quebec’s VaxiCode application has helped businesses verify the vaccine passports. After completing the required doses, individuals receive a proof of vaccination PDF document by email/text with a QR code that can be presented on a mobile phone, displayed in the VaxiCode app or printed and brought to the gym along with a valid photo ID. Those running gyms can download the VaxiCode Verif app to scan the QR codes. Similar to Touchstone, Bloc Shop in Montreal notes verified vaccine passports in their check-in software, so that gym members only need to scan their Bloc Shop card at their next visits.

Ontario has been working towards a similar paperless system that will require showing a digital vaccine certificate and government-issued photo ID to enter most indoor businesses like gyms. While proof of vaccination isn’t required until September 22―and the QR code and government app available by October 22―at least one gym in Ontario had already started enforcing the mandate and received pushback for it. According to Gripped, True North―which started limiting gym access to fully vaccinated customers and employees on August 30―“experienced a DDOS website attack that briefly shut down the gym’s website,” following the policy change, and “anti-vaccination-allied individuals have made nasty comments and sent emails describing their frustration with the announcement.” True North initially relied on the honour policy, awaiting the QR code and app, but now requires proof to be shown as required by the provincial regulation.

While there are a few holdouts to vaccination mandates, the majority of provinces in Canada have already started putting them into place or are moving towards doing so. Further west in British Columbia, by September 13 individuals will need to have at least one dose to enter climbing gyms, and full vaccination by October 24. The Hive gym chain provided some flexibility on memberships ahead of the change, giving members who are not vaccinated the option to request a “vaccine passport freeze” on membership dues. Like other gyms, The Hive’s policy also includes the option to store vaccination status for check-in, so members don’t have to show their proof of vaccination and photo ID each time.

A post shared by The Hive Bouldering Gym (@hiveclimbing)

North America isn’t the only place where vaccines are being required in certain regions, nor is it the first. And elsewhere, vaccination mandates have even been introduced at the federal level. In France, the country’s “health pass” has been required to access gyms since August 9. To get the health pass, a climber must either be fully vaccinated, have a negative test or have recently recovered from COVID-19. Like in Quebec, individuals receive a QR code on their vaccination document that can be uploaded to the government app; staff then scan the QR codes at check-in with the business version of the app.

As in North America, the requirements in France haven’t been welcomed by everyone. Protests have been taking place in the country since the announcement. Gym Climber reported on French free solo climber Alain Robert’s method of protesting, which involved scaling a 614-foot tower in Paris to speak out against the perceived “attack on fundamental freedoms.” Some gyms in France have also spoken out on social media against the health pass being required. However, it should be noted that, despite the protests, over 80 percent of the population over 12 years old in France is now fully vaccinated, according to the government app, and a far greater percentage of non-vaccinated individuals are being hospitalized compared to the vaccinated population.

In nearby Italy, the nation’s “green pass” was extended to gyms around the same time. Since August 6, climbers have had to show proof of vaccination, a negative test or recent recovery from the virus to access climbing gyms. Soon, Italy will even require all workers in the country to show the green pass. According to BBC, the measures are some of the strictest in the world and are a first for Europe.

As vaccination requirements are put into place around the world, it should be remembered that there is not equal access to vaccines globally. Countries in Africa, in particular, have had some of the latest access to the vaccines and the lowest rates of vaccination. According to the World Health Organization’s website, “The vast majority [of vaccines] have been administered in high- and upper-middle-income countries, mostly in 10 countries alone. If these doses had been distributed equitably, they would have been enough to cover all health workers and older people globally.” 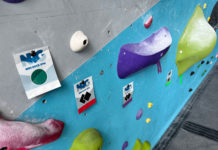 Always Be Open to New Ideas: Behind the Desk with Charlie...