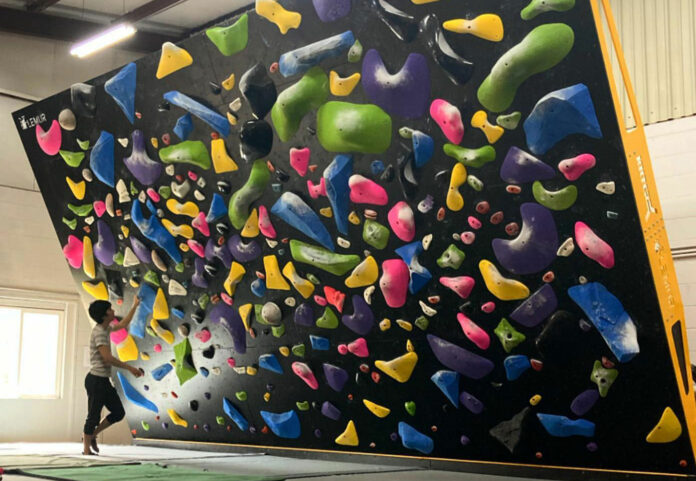 Kilter Grips has been a longtime icon in the climbing and routesetting world. Founders Ian Powell and Jackie Hueftle boast over 50 years of routesetting and climbing industry experience between them. Grip List eight–time Grand Prize and five–time All–Time Favorite Holds winners, and makers of the reigning Best Board System and Best Homewall Board System in the Kilter Board, the duo maintain a steadfast philosophy that Kilter is a company of routesetters; current, former, aspiring and inspiring ones.

“What we provide is blank canvases and tools,” said Powell in an interview. “Everything we build is built with intention. We don’t make anything that we don’t want to climb on and play with ourselves.”

Kilter unveiled a new toy at the 2022 CWA Summit in Salt Lake City, Utah: a glossy, matte-black, immense 24x14ft fully adjustable board that ranges from -10° slab to 70° overhanging. Built in partnership with Lemur Designs, the Kilter/Lemur board―called the Adjustable Slab―was a titan looming large in the exhibition hall.

With the boom in climbing gyms over the last few decades came a rise in demand for commercial routesetters working in gyms. One of the biggest challenges Kilter has faced in creating tools for routesetters is the wide range of experience among gym setters. The routesetting trade is still in its infancy, and the potential of standardized education channels for commercial routesetters, specifically, is still years (if not a decade) away. In the meantime, the education of new setters falls largely on the shoulders of Head Setters, and the learning processes vary by gym.

One intention behind the design of the Kilter/Lemur boards is routesetter education. Teaching moments can be relatively limited on a traditional training board. Limited in sizing, angles and hold types, a traditional board can often be spanned by a 6ft-tall person in three or four moves―several of those moves with their feet still on the kickboard. Adjustable boards, including the towering 16x16ft Steep Wall with adjustable kickboard version of the Kilter/Lemur board, allow routesetters to dial in the exact moves and experience they want their climbers to have.

“Let’s not sacrifice the creativity of movement,” said Powell. A large, fully adjustable board that can be both a bouldering or spray wall is a teaching moment in ways traditional boards can’t be. Why do some climbs jump two grades when the angle is dropped by 5° but others remain roughly the same? Is it the hold type or the movement? At what angle does this problem hit V10 and why? Why is a backflag effective at 40° overhanging, but swapping feet for opposition more effective when the problem is dead vertical? On the Kilter/Lemur board, routesetters can freely explore these questions with open range and precision.

The experiment and study of movement doesn’t end with routesetters. A longtime climbing coach once told Powell about a competitive athlete who was frustrated while falling at the same move over and over again. The coach asked the athlete to take a water break, then while the athlete was gone adjusted the board to be 5° less overhanging. The athlete returned and, without knowing the wall was changed, was surprised to stick the move without much difficulty. Again, the coach asked the athlete to step away and returned the board to its original angle without explaining what had changed. The athlete stuck the move again. The coach said the quiet adjustment of the board not only helped the climber remove a mental block of “I can’t do it, it’s too steep,” but also helped the climber learn the pattern of movement at an easier angle. It was proof of concept.

Imagine a 2,000–square–foot room where every wall moves between -10° slab to 70° overhanging―that’s now a possibility. The climbing gym industry is following an upwards trajectory, and innovation is far from over. Inventions like the Kilter/Lemur boards help new and existing gyms of all sizes maximize the space they have to work with to grow the climbing community in their area.

“Every gym developer understands the importance of cost per square foot and ROI. Older full-service gyms may be looking for affordable upgrades to an outdated and already packed space; new small bouldering or training gyms may be working within the constraints of an existing building but want the most variety possible. Even large ground-up builds desire the latest state-of-the-art features that reach the most users. In all cases, our adjustable boards check the box,” said Hueftle.

The Kilter/Lemur boards are built with space considerations in mind. The Original Kilter Board has over 80,000 possible problems in its 12×12 space, while the Kilter Homewall has over 8,000 possible problems. These databases of problems are constantly growing. Factor in the 15 different angles these walls provide, and the boards can easily host over one million boulder problems. Whereas the barrier of entry for traditional training boards can be relatively high―often catering to climbers on the upper end of the grade spectrum―the Kilter/Lemur boards are built for all climbers. It is rare to find a board that is an investment for 95%+ of your customers.

To understand the boards in action, we spoke to Justin Ridgely, owner, operator and Head Routesetter at Volcanic Rock Gym in Hawai’i. The climbing community on the Hawaiian Islands is tight knit and growing; Ridgely noted the ever upward trend of indoor climbers crowding the islands’ three gyms during peak hours, and the slow but steady development of climbers seeking outdoor climbing.

Ridgely first established Volcanic Rock Gym in 2010, but the gym opened at its current location in September of 2022. The new spot has roughly 4,000 square feet of bouldering terrain. The homey gym space was chosen not only because of Hawai’i’s expensive real estate, but also because of the environmental and financial concerns of controlling the climate of a large building. Daytime temperatures in a space without climate control can easily reach 95°F in Hawai’i. “The electrical bill would be insane in a large space,” said Ridgely, “so we opted for a smaller gym, but took in every consideration to fully maximize what we have.”

Volcanic Rock Gym currently has two adjustable Kilter Boards and the new Kilter/Lemur Adjustable Slab that is 24’ wide, 14’ tall, and goes from -10º slab to 40º overhanging. “We hosted a Knockout Competition,” said Ridgely. “I can’t begin to tell you what we discovered setting and forerunning the problems.” The competition took place on the Kilter/Lemur board; every 20 minutes, the board would get lowered 10° and whoever failed to climb it was eliminated. “The most labor-intensive process was the forerunning,” said Ridgely, who leads a team of six setters. “We foreran and tweaked at every angle, and reversed the setting to try it again on the previous angle. There are endless opportunities to study movement this way.”

The Makings of True Rockstar Routesetters

Powell and Hueftle described the process of “releasing the [Kilter/Lemur] board into the wild,” with the air of two wildlife biologists who had nursed an animal back to health. While the duo and Lemur Designs built the board with certain intentions in mind, they admitted they’ll never know what the industry does with it until it’s out there. They also know this is just the beginning―the board is not the end product.

“All routesetting is graffiti,” said Powell. “Graffiti is art, but it’s not permanent. It gets painted over regularly, or you tag a train and the next morning it’s gone. The graffiti artist starts again somewhere else.”

Powell entertains the ideal of a standardized board or wall, and immortalizing routes. You can pull up a Kilter Board climb on the app anywhere in the world, so what’s stopping the industry from recreating a routesetter’s work across gyms? The Kilter/Lemur board is built with a grid pattern, and all that’s left is tagging the holds with a scannable chip. Powell described a moment years ago, when the head of a climbing wall company gave talks on the subject, many professionals balked at the idea and believed it would inevitably create more hold installers over route setters.

Powell disagrees. “I’m trying to print, or more accurately, make sculptural copies of a routesetter’s artwork,” he said. “This is not the death of routesetting, no―I’m saying routesetters’ work should be preserved. This is an opportunity for rockstar routesetters to be even more revered than they are now, and an opportunity for new talent to be discovered. You could set a climb, and wake up the next day to find it replicated across 50 gyms in the country―wouldn’t that be something?” [laughs] “We’re getting ahead of ourselves.”

The Kilter founders believe in the creativity and talent in the setting industry, of both veterans and newcomers alike, and they know the innovative minds of routesetters and climbers have no end.

Kilter Grips, owned by master shaper Ian Powell and routesetting expert Jackie Hueftle, is the most decorated climbing hold and board company among setters voting in the CBJ Grip List, having won the most Grand Prize, All-Time Favorite Holds, Best Board and Best Homewall Board awards. Homegrown by setters for setters, Kilter has the comfortable, aesthetically pleasing, and extremely useful holds that gyms need, plus Kilter Board layouts for every gym and homewall size. Kilter/Lemur Adjustable Slab and Steep Wall boards now available. Maximize your space and get a quote today. 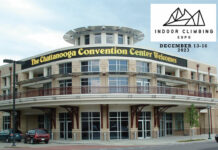 Updates From the Indoor Climbing Expo