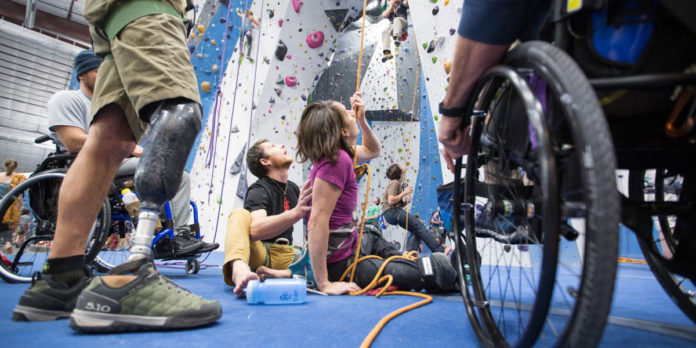 Most climbing gyms already have the raw materials to offer great experiences for patrons with physical disabilities, but a paraclimbing champion shares what is needed to make any gym welcoming to climbers of all physical ability levels.

The idea of making any gym workable for people with physical disabilities is certainly not new, and since 1990, every gym has been legally required to adhere to the stipulations of the Americans with Disabilities Act (ADA). But recently Paradox Sports, an Eldorado Springs, Colorado-based nonprofit organization that offers consultation on climbing accessibility, wanted to dig much deeper. The organization released a comprehensive survey to adaptive climbers around the world to find out “what makes or breaks a great adaptive climbing experience at a gym.”

The results of the survey varied, but one takeaway was that there is no single area of consensus. In fact, making any gym physically inclusive should rightly touch on all aspects of a facility’s operation. Ideally inclusivity should start during the development and construction phase of any gym, but even pre-existing buildings can be retrofit to accommodate adaptive climbers. As a valuable reference, Eldorado Climbing recently released an Adaptive-ready Checklist that goes beyond the standards set by the ADA. Points such as making a gym entrance wide enough to fit a wheelchair base (ideally 32 inches), having checkout counters that accommodate patrons of all heights, and offering waiver stations for various needs should be taken to heart because people cannot climb at a gym if they cannot comfortably get past the necessary entry procedures. (And the Disability Etiquette 101 section of the checklist should be seen as required reading for all gym employees).

But beyond the checklist, Paradox Sports sought out paraclimbing champion Maureen Beck to distill the results of its survey. Below are four keys from Beck that—if applied—will help any gym become welcoming to a much wider population.

As noted in the Eldorado checklist, there are likely already a number of existing adaptive sports group in any given area, and a gym can work with those groups in myriad ways—learning networking, partnering. Additionally, a gym should consider its various programs (bouldering leagues, competitions, youth clubs, Introduction to Climbing courses, yoga, Gym to Crag classes) and consider whether they could accommodate all physical abilities—or if the same programs could be specifically offered to patrons with disabilities.

Beck says: “When [Paradox Sports] began this survey, we expected to hear a lot about how there are physical barriers in a facility. We did see a lot of that, but a resounding theme was the impact of programming. ‘Seeing that there was an event just for people with disabilities was what got me in the door,’ said one respondent. ‘Otherwise, I’d be afraid that I’d go to the gym on my own with friends, and the staff wouldn’t know what to do with me.’”

Consider the many structural sectors of a gym and one quickly realizes how far-reaching the concept of mobility is. The gym entrance is just one area, but there are also the climbing walls themselves…and where one stands while belaying. There might also be staircases to bouldering caves, restrooms and showers, cafe tables, gear shop nooks, yoga rooms, work stations, and weightlifting sections. Also, a key to physical inclusivity is considering more precise accommodations: handrails, flooring foam that reacts positively to wheelchairs and crutches, chest harnesses or full body harnesses, and other accouterments.

Beck says: “Starting in your parking lot, see what it’s like to navigate through your space, pretending you are blind or are in a wheelchair. What’s it like to be at your check in desk from a seated height? How are the waivers done? Can someone get from the climbing area to the bathrooms easily—are there cubbies or benches in the way? It’s important to set your climbers up to be as successfully independent as possible.”

The same strategy of envisioning what it is like to navigate a parking lot with various levels of ability can be applied to the walls and the routes themselves. Mobility and balance should be considered, but also visual impairment. The aforementioned Eldorado checklist points out the utilization or addition of corners to aid sit-climbers. Headsets for visually impaired climbers are also useful.

Beck says: “Most adaptive climbers can just climb regular routes, but a few can benefit from intentional routesetting. Seated climbers who wish to climb the wall rather than the mechanical system will want big holds, close together, on an overhanging wall so they can freely campus. Consider redirecting the toprope belay with a draw to protect the climb. Climbers with limited mobility can also benefit from ledgy routes in corners.”

It’s easy to overlook this important key, as one often thinks first and foremost of the climbing experience rather than the belaying experience. But the same methodology and consideration for intentional routesetting should be applied to belay options. Beck wrote an educational blog post about various ways of adaptive belaying; the categories are separated as: hand amputee (can use elbow), arm amputee (no use of elbow), standing, and seated. The post should be considered a starting point for any gym.

Beck says: “Most adaptive climbers can top rope belay as well as, if not better than, the typical able bodied climber. Some may need to do it sitting, others may need to figure out if they’re going attach themselves to their chair or anchor in another way. Sometimes adaptive belayers won’t be able to follow the cut and dry belay test rules (myself, for example, will never be able to lower with two hands on the brake strand) but with a little critical thinking and problem solving, we can continue to foster independence in our adaptive climbers.”

Note: There are more resources on adaptive climbing than ever before. Paradox Sports offers an Adaptive Climbing Initiative Course, with the expressed goal of making “every climbing gym in the country accessible for people with disabilities.” The North Face has partnered with Paradox Sports, and courses have been taught at gyms ranging from Mesa Rim in San Diego and Vertical World in Seattle to The Cliffs at LIC in New York City and First Ascent in Chicago. USA Climbing annually hosts the Paraclimbing National Championship with six separate categories (Neurological / Physical Disability, Visual Impairment, Upper Extremity Amputee, Lower Extremity Amputee, Seated, and Youth). Finally, Beck can be contacted via her website, Mo in the Mountains, for questions or to book a speaking engagement.

About Beck: Beck is a native of Maine and began climbing at age 12. From a young age, she developed and honed “her potential as a one-handed climber.” She works with the adaptive climbing community in a number of ways, including through Paradox Sports. She also managed the Front Range Adaptive Climbing Team. She has won five national climbing titles, including gold medals at the 2014 and 2016 Paraclimbing World Championships. She is the chair of the USA Climbing Paraclimbing Committee. 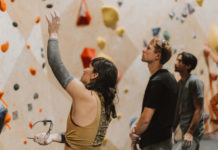