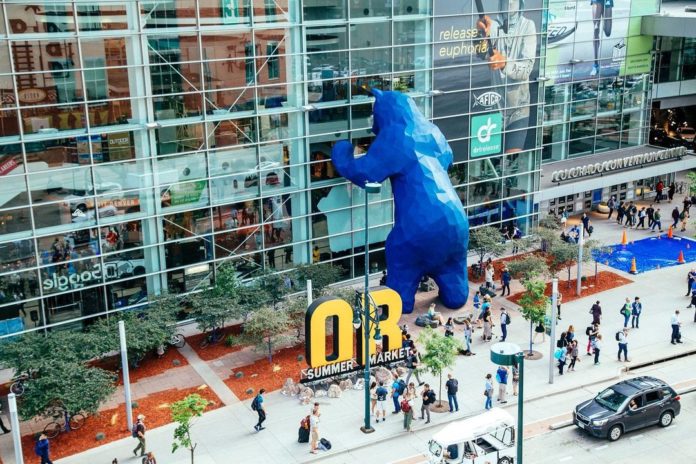 After being cancelled in 2020 due to the pandemic, the Summer Outdoor Retailer (OR) show returned to action earlier this month. Like public gatherings in most U.S. regions, the Denver-based event wasn’t without COVID protocols. Masks were optional for vaccinated attendees and required for everyone else, for instance. The exhibitor list was also considerably shorter than the previous summer gathering in 2019. About 1,400 brands are listed on that year’s exhibitor list, whereas about only 400 are listed for 2021.

“This show is different. The industry is gathering as we continue to navigate the impacts of the pandemic. A lot of people and brands want to be here, but they can’t,” said Marisa Nicholson, OR’s Senior Vice President and Show Director, in the Day 1 issue of The Daily, the OR’s official publication.

Several climbing brands were among the exhibitors at the event, which has been held at the Colorado Convention Center in recent years since moving from Salt Lake City. Major gear companies and OR staples like Rab and Trango―which also sells eGrips climbing holds―were back on the scene, as well as Czech-based climbing equipment company Ocun and the nonprofit American Alpine Club.

New climbing entities like OnCrux were also on the floor this year. OnCrux launched during the pandemic with 70-percent-alcohol liquid chalk advertised as hygienic. (Friction Labs was reportedly the first company to come out with hygienic liquid chalk, which is 80-percent alcohol). The new chalk company has been making moves of late in sponsoring Sierra Blair-Coyle and retailing at Sender One and Long Beach Rising in California.

“During the pandemic, we drove door-to-door to gyms to demonstrate our chalk,” OnCrux’s chemical formulator Michael Doan, a cosmetic industry chemist and climber, told The Daily.

The Climbing Initiative (TCI) was another organization on the Summer OR exhibitor list for the first time. Founded in 2019 by Yale alumnus Veronica Baker, TCI combines a unique blend of research and collective action: researching the social, economic and environmental factors affecting underrepresented communities, and supporting climbing communities worldwide in driving positive social change based on best practices.

“By sharing experiences and lessons learned from people who have gone through these processes, we are providing applicable steps and guidelines to use climbing as a catalyst for economic social change,” said Baker in the Day 3 issue.

TCI was one of several nonprofits in the spotlight at the event. This year’s Inspiration Awards, now in their 11th year, were awarded almost entirely to BIPOC-focused organizations and BIPOC individuals. Among the award recipients were Tyrhee Moore (Individual), founder of D.C.-based Soul Trak Outdoors―which connects communities of color to outdoor spaces, including climbing spaces―and Monserrat Alvarez Matehuala (Emerging Leader), “a community activist, outdoor educator, ambassador, climber, and mentor to women of color in the outdoor industry,” as described by The Daily.

Monserrat is also one of the national founding team members of Brown Girls Climb (BGC), which was further highlighted in OR’s publication. Most recently, the predominately volunteer-led organization successfully raised $100,000 for its new BGC Marketplace. According to the crowdfunding page, the marketplace will offer consumers “a values-based approach to shopping” and will include filters for ownership (BIPOC, Women & Non-Binary, LGBTQIA2+), fit and style (adaptive, plus size, gender inclusive), and corporate responsibility (environmental initiatives, social justice initiatives).

The funds will also serve the dual purpose of providing BGC staff with livable wages. “Brown Girls Climb is a small startup which has been run by a number of volunteers the past few years while the foundation was being built,” reads the BGC’s message on the crowdfunding page. “We are in a position now to grow but need seed money and real investment to do so. Without investment, we are at risk of closing our operation entirely as we cannot continue to operate ethically without compensation for those doing this labor. As an offering for your investment, we are developing a great new tool to help support you and your journey.”

According to BGC’s Instagram, the newly-raised funds will support a year’s salary for new CEO Brittany Leavitt, inclusive and paid staff positions, launching the new marketplace, and maintaining its meet-ups and mentorship programs. BGC has already posted new job openings on its platforms for a part-time Product & Membership Coordinator, based in Colorado, as well as a remote part-time Web Experience & Maintenance Manager.

The next OR show will take place this winter, January 26-28, but plans have not yet been announced for the next Summer OR. Stay tuned to CBJ for more details as they emerge.

From a Storage Unit to a Multi-Location Gym Chain – Gym...

Storytelling Through Movement: Behind the Wrench with Holly Chen