Decades ago, climbing on “artificial walls” often meant locating or constructing free-standing structures that could conceivably be moved or altered with relative ease. The emergence of gyms on a widespread scale soon supplanted these mobile walls as the go-to alternatives to climbing on real rock, but a Montreal-based company, Nomad Bloc, is making a push to bring mobile walls back into fashion. The company, currently comprised of four engineers, has created an “outdoor bouldering center” that operates similarly to a standard gym with various membership options. However, different from a standard gym, Nomad Bloc’s bouldering center—currently located in a private green space in the city—can be moved and reconstructed elsewhere to
accommodate weather, festival scheduling, and other extraneous factors that could influence patronage.

“We were thinking that it would be cool to find a way to deal with the fact that we always wanted to go climb outside but didn’t always have the time to get out of the city and go to the crag,” says Nomad Bloc’s co-founder, Babacar Daoust-Cissé, on the impetus behind the mobile company concept. “Being in Quebec, we figured we needed a way to close and move the structure during winter, so it wouldn’t get exposed to snow.”

More specifically, Daoust-Cissé says Nomad Bloc’s operational plan, set to begin next year, is to operate the bouldering center in Montreal during the summer months and then transport the structure to somewhere warmer in the United States during the winter. The mobile functionality inherent in the design means that a massive construction team will not be required for any
disassembly or reassembly. The structure could be set up in approximately six hours and many of the handholds and footholds (aside from volumes and larger holds) could remain on the wall during such long transportation.

“This format allows us to bring outdoor climbing to very urban areas in a day,” Daoust-Cissé adds. “What is one day a park or an abandoned land can very quickly become a cool bouldering spot. This opportunity gives a very good visibility to the sport. As opposed to regular climbing gyms, which are usually in big buildings, and most of the time are in more industrial or more
remote part of cities, we have the chance to be just out in the open and very visible to the public.”

Nomad Bloc hopes to build additional mobile structures in the future with a comforting fact that any structure could be moved if a chosen location proved to be inadequate or undesirable—a benefit of the transportable model that gyms don’t have, notes Daoust-Cissé. 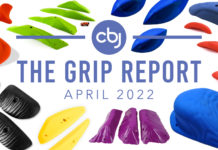