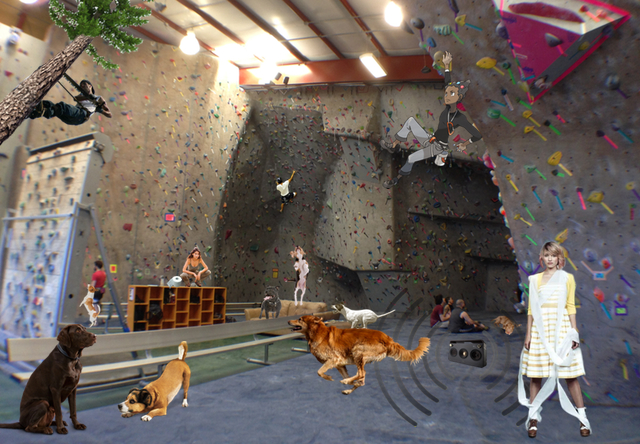 In Chris Noble’s recent article in Climbing magazine, “The Mentorship Gap: What Climbing Gyms Can’t Teach You”, the author lays responsibility for a host of problems at outdoor crags squarely at the collective feet of indoor climbing gyms.

From “siege-cragging” to packs of dogs, loud behavior, environmental impacts, user conflicts, and crag closures, Noble argues that outdoor climbing areas are being ruined as a result of “climbing’s ever-expanding popularity and of the challenges we face as new climbers transition to outdoor climbing.”

His argument boils down to this: climbing gyms are introducing too many new people to the sport, the crags are getting crowded, and new climbers aren’t playing nice.

Noble even coins a cute term to hammer home his point: B.G.E. (Before the Gym Era). In this idyllic yesteryear, climbers were all “outdoor people” who had wise, older, experienced mentors who imparted on their eager pupils a “holistic climbing knowledge, including safety and technique, but with an emphasis on environmental concerns, etiquette (social norms), and climbing traditions appropriate for the region.”

Oh, the good olde days. I guess today people are lazy, arrogant, and any urban punk that learns how to top-rope at his indoor climbing gym will march straight to the great outdoors thinking he knows all there is to know about climbing, dragging his posse of indoor friends and unleashed dogs, his homemade perma-draws and full bladder along with him.

Does this person exist somewhere? Yes. Does he represent all climbers that learned to climb in a gym? No. The logic isn’t there, and it’s insulting to indoor climbing gyms and indoor climbers.

In fact, this idea that all climbers of yore learned from a mentor is a bit of a myth. Many climbers from “B.G.E.” read Freedom of the Hills and tried out their new skills with a few adventurous friends. Raise your hand if you had a true mentor or are a true mentor. Or did you just love climbing and playing around on rock?

The Gym Is Not Your Mother

So, where did they learn this type of behavior? Who knows, maybe their mothers didn’t love them enough. Or maybe there are just rude people everywhere and have been since time began, and will be till the crags fall down.

This idea that climbing gyms are producing outdoor menaces is ridiculous. There just isn’t any evidence that poor manners and bad behavior are a result of people learning to climb indoors.

Who is to Blame

It’s true that the sport is growing quickly, in large part, to all the awesome new indoor climbing gyms across the country. With more climbers comes more impact on climbing areas, and more interactions (positive and negative) between climbers at the crag.

But if we are in the business of assigning blame, we need to include the guidebook authors that are showing climbers the way, the media that glorifies outdoor climbing, and the gear manufacturers that make it accessible. Then there are the pro climbers that are setting bad examples. It should be noted that the two recent most high-profile instances of climbers doing damage to a crag have been perpetuated, as noted in the article, by the lumberman, Joey Kinder and the miner, Ivan Green. Both could be considered “real” outdoor climbers. Yet somehow their mentors never told them it’s wrong to cut trees down and chisel holds into rock.

To be fair, Noble does get around to spreading the blame to everyone at the crag. At the very end of the article he admits, “It’s time to stop pointing fingers. It’s not new climbers, gym rats, traddies, or boulderers causing the problems; it’s all of us.” He also acknowledges that it will take a diverse group, “individuals, local climbing organizations, the Access Fund and the American Alpine Club, the gym industry, guides, educators, parents, coaches, and major climbing brands” to improve climbers skills and awareness.

This is a sound and reasonable approach to solving the real issues being experienced at some crags. But before Noble gets to this shared responsibility for fixing the problem, he uses two-thirds of his article to detail all the rude, irresponsible things being done, as he sees it, by climbers that learned to climb indoors.

Noble’s article could have had the same message to climbers without ever mentioning climbing gyms. But I guess everyone needs someone to blame.

Gyms Can Be Your Teacher, Not Your Babysitter

There are legitimate issues, particularly around safety, with any climber going outside for the first time. Climbing gyms can play an important role in helping climbers of all experience levels improve their technical skills and learn the ethics of being outdoors by offering outdoor climbing classes.

As we’ve reported before, gyms are doing just that. Most facilities, whether they are on the front range or on the plains, offer training on the fundamentals of outdoor climbing. In doing so, they have a responsibility to ensure their students come away with the complete set of skills needed for everyone to enjoy a day at the crag, and to preserve it for years to come.

If the classes they are offering fall short of this goal, then that is something to get agitated about. But that’s not really the problem, is it? The problem is that not everyone takes a class, and even if they do, they may not practice what was preached.

Unless we want to start issuing licenses or permits to outdoor climbers, there is no way to ensure everyone has the proper skills. We will have to rely on each other to speak out when we see improper behavior.

Climbing has always been about personal responsibility. In the olden days, “B.G.E.”, the first thing your “mentor” said to you during your climbing training was that rock climbing is dangerous and you need to be responsible for your own safety.

Yet lately it’s become fashionable to blame the easiest scapegoat, the climbing gyms, for all the problems at the crag. We need to stop repeating this baseless claim and recognize that everyone that goes to the crag has a personal responsibility for their safety and behavior.

A Word on Noble’s Numbers: The article trots out a whole host of numbers to show how many new climbers are being churned out by climbing gyms. (1) Noble states that there are 884 gyms in the U.S. and Canada according Mountain Project. It’s important to recognize that lists like the one on MP and indoorclimbing.com are not up to date and include numerous recreations walls at universities, amusement parks and community centers, in addition to commercial climbing gyms. We have done extensive research on this topic and believe there are currently 328 commercial climbing gyms in the US, with 36 more slated to open in 2014. (2) The article states that, “Based on liability waivers, it’s estimated that between 1,000 and 1,500 people are trying climbing for the first time—every single day, in the U.S. alone.” We assume that he gets this number from Rock Gym Pro, the front desk software that is used at an estimated 90% of commercial climbing facilities. However, waivers are an inaccurate indicator of how many people are trying climbing for the first time. Many gyms require anyone entering their facility to fill out a waiver. That includes grandma and uncle Harry who have come to watch Johnny and his 10 closest friends climb on his birthday. Is this their first time climbing? Maybe. (In the past year I have personally filled out a new waiver at least a dozen times.) Waivers are a really good way to tell how many people have signed waivers, not a good way to tell how many people are trying climbing for the first time, let alone how many of them will try outdoor climbing.

Now Hiring // This week's featured jobs include a

Sender One Unveils Plans for a Bouldering-Only Gym