Aragon is the science behind indoor climbing. Aragon is the only true polyurethane manufacturer that has found a niche in the climbing hold industry. With expertise in specialized polyurethanes and customized manufacturing, Aragon has been developing the world’s strongest most reliable holds since 2002. The industry and gyms know that they can rely on Aragon manufactured holds to be the best: never breaking and maintaining their grip longer than any other hold. Aragon has partnered with the premier hold brands in the US and Europe to grow the climbing hold industry and create a superior product for all climbers. With their brands, Aragon manufactures 90% of the climbing holds in the USA.

Aragon’s US partners include eGrips, Soill, Kilter, Kingdom Climbing, Head Rush, Eldorado Climbing Walls, Kumiki, Teknik, and Urban Plastix. Their new partners Working Class, Method, and Legacy are starting in 2018! Aragon has recently begun producing for several European brands including Flathold and Squadra (coming soon). Aragon also works with some of the biggest Playground manufacturers in the US to create safe structures for our young climbers. The municipalities insist on climbing holds that won’t break for liability purposes and specify Aragon.

With the upcoming Olympics in Japan and the debut of climbing in The Games, the climbing industry is bound to explode all over the world and Aragon and its brands are ready for the exciting growth! 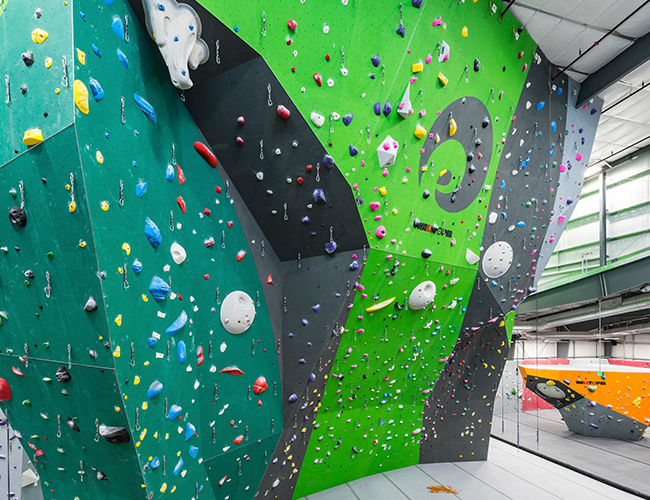 The Original Science Behind Climbing

Since the inception of Aragon in 1998 by polyurethane chemist Chuck Demarest, Aragon has become a leader in climbing holds manufacturing. Chuck Demarest, former President of the Polyurethane Manufacturing Association (PMA), inventor of polyurethane roller technology for IBM printers and the Kryptonics skate wheels, has been an innovative thought leader in the polyurethane arena his whole career. Being a mountaineer and long-time member of the Rocky Mountain Rescue Group living in Boulder, Colorado, Chuck was bound to find his way into the climbing industry. In 2002, Aragon began work with eGrips, a climbing hold company based in Boulder, and invented the best polyurethane formula to hit the climbing hold industry.

Vice President Marci Seidel remembers, “We knew we had something special and knew we could help the climbing industry. Little did we know we’d change the industry standard with our holds!”

The secret isn’t just the formula, but also how it is put together and eventually cast. To keep the technology proprietary and control the quality and consistency of the product, Aragon tapped into their chemists and chemical engineers and began producing all of the raw material components in-house, something Aragon continues to do today. The end result is a climbing hold that is better than the best. Aragon’s holds can be dropped from heights without cracking, can be used continuously without losing its texture and be exposed to heat or cold without changing performance characteristics. In fact, setters can drill into and attach smaller holds to the Aragon hold, something that can’t be done with other polyurethane holds. 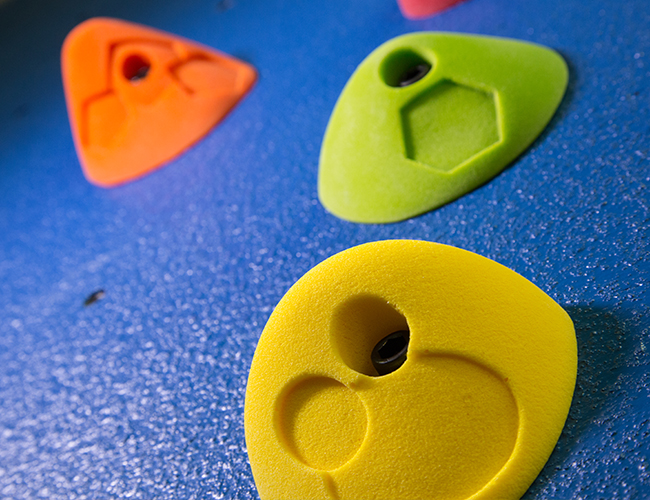 Before 2002, the majority of climbing holds were made out of polyester resin. They broke – they broke a lot. When it came to improving the climbing hold technology, Aragon first looked at what was best for the industry. For the climbing industry to succeed, they needed affordable, durable, and safe holds. Holds that would never break and would maintain their texture and grip. Over the last 16 years Aragon has used its expertise to create the best climbing holds in the world by partnering with the premier hold companies and shapers to provide a superior product to the indoor climbing markets.

Not only has Aragon been the leader in the manufacturing of holds but they have been spearheading the color pallet for the market, providing the most consistent and vibrant colors on the market today. Partnering with a global pigment supplier, Aragon has created a large color pallet to suit the needs and designs of today’s new route setting standard by color. Aragon created the color codes and standard color definer for the most used colors by gym route setters in the US.

Aragon was acquired in 2010 by The Hanson Group, LLC. This acquisition created an even stronger force behind the Aragon chemical expertise. The Hanson Group specializes in polyurethanes and polyurea technology. They bring not only strength in knowledge but additional offerings to the climbing industry. A new spray applied, safety padded climbing wall concept is being rolled out in 2018. Their partners in the playground market have opened doors for incorporating polyurea technology on climbing walls and other surfaces. The Hanson Group has expanded the products and services available to the climbing industry.

We want to thank all of the brands that entrust Aragon to make the best holds for them. It is a true partnership that we value greatly!

To learn more about Aragon Elastomers, head to our website. For quotes or project inquiries, email the team.