Most of us will never feel the rush of redpointing a 5.14c, but climbing videos bring us along for the ride to the top. For the filmmakers, that ride isn’t cheap. Multiple trips to the crag, drone operators, park permits, writers, insurance and lightweight video equipment all raise costs in an era when viewers expect to watch great climbing footage for free on video sharing and social media websites. With all the free footage, it can be tough for filmmakers to turn a profit.

It’s really difficult, according to Pete Mortimer, co-founder of Sender Films. Sender Films, a nearly 20-year-old company, has produced many documentary climbing films from the early climbing classic, “Front Range Freaks” to “Valley Uprising,” which is available on Netflix.

“It’s a tough business, but there is a hunger out there for good content. In many ways, we are living in the golden age of video as there are so many outlets for video content now, from Apple TV to YouTube to brand channels. Companies like Netflix are trying to get subscribers by creating original shows and by buying fresh content, and they are spending billions of dollars a year. Meanwhile, the traditional advertisers want to support video projects and create their own channels, and there are more avenues than ever for video content now, but it’s still a tough business and hard to create valuable content,” he said.

That sentiment is echoed by Jeff Davidson, vice president of marketing for Skratch Labs. “The sponsors are all dying for content so what ends up happening is that regardless of how much money is being asked of the sponsor, the sponsors are asking for more from the filmmakers and the sponsors can use that content in a lot of different places.”

Skratch Labs makes performance food and drinks and partly funded the documentary video of the first female, Michaela Kiersch, to send The Golden Ticket (5.14c). That video, “The First Female Ascent of The Golden Ticket,” was produced by Andy Wickstrom, and Gabi and Brandon Fox.

The Long and Short

“For Michaela’s film, we knew the documentary would be about 15 minutes long. In this day and age that’s long when it is online, so we asked for a 30-second version and multiple 10-second versions so we could use the same content in six different channels. As a nutrition company, rather than a climbing gear company, we also asked for rights to the B-roll so we could show the energy it takes to climb like that,” Davidson said.

With rights to the B-roll (supplemental footage), Skratch Labs could hire their own video editor to make videos about how its products help climbers. Sometimes, those rights come with restrictions on the length of the video made from the supplemental footage.

The filmmaker takes the footage he or she has rights to and then packages the video for different outlets. That way, the film is funded part by the sponsors and in part by viewers downloading the film, or by subscription outlets.

“The focal point was selling DVDs when we started and now that has fallen away to selling transactional videos online like download, rentals or streaming, and a lot has been lost to piracy,” Mortimer said.

Under a different business model, some big companies pay for films outright. Well-heeled sponsors like Red Bull, The North Face, Patagonia, and so on, hire filmmakers to produce films starring their athletes. These sponsors keep all the rights to the footage, but the filmmakers do get credit for the film and the creative decision making.

Sender Films, one of the more establishing production companies, operates under both of these models, and uses the Reel Rock tour, which has over 500 screenings nationwide, as a distribution mechanism for films that they own rights to. Reel Rock also works with other filmmakers to get good films on tour.

Some of those films fall into a third business model: the passion project. These videos often stem from close relationships between filmmakers and pro climbers and get made with modest funding. The film in an investment in the pro’s brand and a showcase of the filmmaker’s creative and technical skills, but is often not financially profitable.

“I approached my sponsors with the idea and proposed different budgets for them in exchange for product and logo placements. I didn’t take any of the cash, it all went to the editing because I already get paid to be an athlete for them and my expenses to go to the Red were covered,” Kiersch said.

The Golden Ticket (5.14c) is in Kentucky’s Red River Gorge, known as “the Red.” Nearly everyone donates his or her time in for a passion project. Brandon Fox, one of “Golden Ticket’s” filmmakers said, “If we were charging day rates or hourly rates like we do with other video projects it didn’t cover near what it would actually cost, but we enjoy making these videos and knew that it would be a great story. We’re not coming away rich from it.”

Brandon and Gabi Fox support their passion projects with their photography business, Foxes Photography, and by Just Go Climb, a company that produces shorter commercial videos, or brand pieces. Examples of this kind of film are their three-and-a-half minute videos “The Woodshed of Rockstar Volumes,” and “Tony at the Rubber Room.” Funding passion projects through other means is common; Kiersch is a climbing coach as well as a pro.

“It’s tough to make a full-time business out of it,” Brandon said about entering the climbing-film documentary business. “Getting funding on board is the most difficult thing and the biggest barrier to making more really awesome climbing videos.”

One link to funding is through the pro climbers and their connections to sponsors. The pros are the stars of these films and often have a significant amount of creative say in the way film portrays them. It is absolutely critical for pros to protect his or her own brand image. For example, some pro climbers might ask that footage of them swearing after a fall be cut from a film, others might prefer that it be left in.

“When I promote my personal brand it’s also promoting the sponsor’s brand. Being a professional athlete is just a marketing game. It’s about how many people you can influence to buy a certain product. Part of our job is to create content for the companies and promote the product so this [“Golden Ticket”] was that to an extreme,” Kiersch said.

Over 100,000 online viewers have watched Kiersch send The Golden Ticket, endorsing her sponsors’ products. That’s just what the sponsors want. The sponsors need the pros and filmmakers to show products to viewers, the pros need the filmmakers and sponsors to get them in front of viewers, and the filmmakers need the sponsors and pros for stars and funding to make films. It’s a climbing love triangle that provides viewers with great content to watch on the way to the crag. 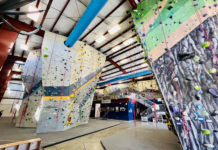 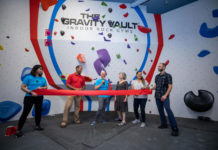 2nd WICS of Walltopia Connects at Exciting Time for Climbing