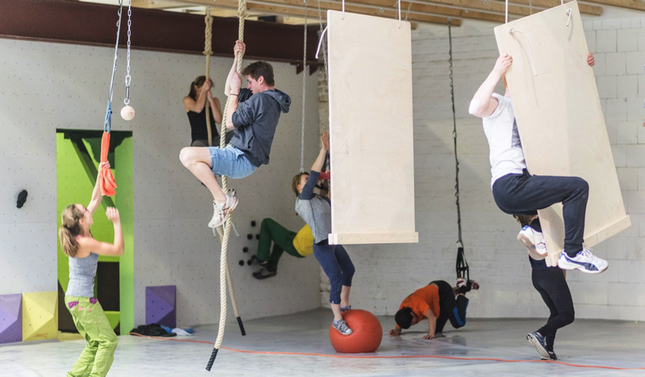 In December 2013, videos from a German bouldering gym, not yet open to the public, started making their way around the Internet. In the videos, World Cup climbing champions Jan Hojer and Juliane Wurm are seen running, leaping and campusing on clean, beautiful, sparsely set climbing walls.

Suntwerk, the gym behind these insanely popular videos, opened their doors at the beginning of the year and has quickly taken over the dreams of routesetters and bouldering managers. The gym is a hybrid of bouldering, climber training, parkour, fitness, physiotherapy, bistro and kids zone. This unique collection was put together by german coaching legend Udo Neumann and his team of highly creative setters and managers.

One of those managers is Flo Schiffer, a 28 year old climber from the Bavarian Alps. “My dream was always to open the best bouldering gym on earth,” Schiffer said in an interview with CBJ. “Because [my home town] is too small to create what I would call a perfect gym, I moved to Cologne and created it together with our great team.”

Stutwerk is, in part, a product of Germany’s love affair with bouldering. “Bouldering is the new trend sport in Germany,” Schiffer said. As the popularity of bouldering and the number of facilities has grown, people have started to experiment with different approaches to the sport. “Because of the high density and the endless possibilities in the gyms people try crazy stuff,” he added. “Just to do things that seem to be impossible is creating a new style of movement in the 3rd dimension.”

One person partially responsible for crazy things at Stuntwerk that resulted in those viral videos is Niklas Wiechmann, Head Setter at Stuntwerk. Wiechman is part of Beta Route Setting, a routesetting firm in Germany that is a veritable brain trust of German setters. He is also a German National setter and the mastermind behind what he calls “moving-riddles”. These riddles combine elements of parkour with the balance and elegance of the best technical boulders. These riddles are best solved with, “… creative movement and not forcing that much raw power. You need flow and sometimes to feel the funk,” Wiechmann said.

This style of setting may not appeal to everybody that comes into the gym. Wiechmann believes it is only “one future alternative for commercial setting.” Translation: it’s just another tool for setters to use. “I know a lot of people say it’s circus climbing but I don’t know any rule which forbids it … and if you don’t like it you don’t have to [do it],” he explained.

Even though the gym has been designed with this style of setting in mind the Stunkwerk owners know that it will not appeal to everybody. Wiechmann tells us, “There are a lot of customers which don’t like to move fast or risky and just want to do power crimpy moves at 45°. No problem, we have our adjustable angle wall where you can climb whatever you want.”

Where Parkour and Climbing Meet

For those unfamiliar with parkour, it has been described as “a quasi commando system of leaps, vaults, rolls, and landings designed to help a person avoid or surmount whatever lies in his path—a vocabulary, that is, to be employed in finding one’s way among obstacles. Parkour goes over walls, not around them; it takes the stair rail, not the stairs.”

At Stuntwerk, those interested can practice freerunning and parkour in a dedicated area built for learning. They provide a space devoted to horizontal movement, a space filled with adjustable bars to swing from and platforms to jump across.

On the other side of the wall is a space built for vertical movement. Clean white boulders stand ready for climbers to ascend the colorful holds and volumes. The whole facility is built for movement; for moving through the man-made environment. The two elements, parkour and climbing are so related and in such close proximity it seems only natural that the two should come together.

Under Wiechmann’s watch climbing and parkour merge in problems, or riddles, that combine running along the climbing wall, jumping around corners and in general moving fluidly up a boulder. The Stuntwerk setters did not invent the so-called “parkour style” that’s popping up around the US and comps everywhere, but they have solidified its presence.

One of the questions on many setters minds is, ‘Is it bouldering or is it parkour?’ Wiechman’s answer is unequivocal: “We don’t care. We just put up problems and you can solve them like you want and play with them.” The connection between the two activities seems so natural to Wiechman that it seems inevitable you would want to do both. “At first it´s having fun moving around, getting around and up obstacles or boulders in a creative way,” he suggested. “Bouldering itself is getting more and more fluid and at times faster and smoother so there is a good connection with parkour and how traceurs do stunts.”

With all the focus on leaping and tumbling, it’s easy to overlook the “serious” climbing that goes on at Stuntwerk under the leadership of Udo Neumann, one of the owners of the facility and the Head Coach for the German National Bouldering Team. The team practices at the facility at least once a month, with some athletes, such as Juliane Wurm and Jan Hojer, who live closer to the facility, training several days per week.

For Neumann the non-traditional climbing facility is perfect for his climbing team. “The idea is more to use Stuntwerk as a laboratory for my ideas concerning training for climbing,” he said. That’s why part of the facility is devoted to adaptive use, with equipment that can be easily modified for training experiments.
“[The purpose of this space is] to have maximum flexibility for meaningful training for my athletes as well as for regular climbers,” Neumann explained. “Everything can be changed and adjusted really quickly.”

That’s not to say that the parkour-style routesetting is avoided during training sessions. In fact Neumann embraces this modern form of the boulder problem. “It is important to have my athletes train on problems that are similar or maybe even more modern than what we expect from the next season of World Cups,” Neumann said in an interview with Epic TV.

When asked if the Stuntwerk team has plans for other facilities, Schiffer was quick to point out how challenging it might be to run multiple locations. “Of course we want to rule the world, but in reality there are a lot of facts why it will be hard to do so,” he said. “But we are young and motivated, so you never know what´s going to come.”