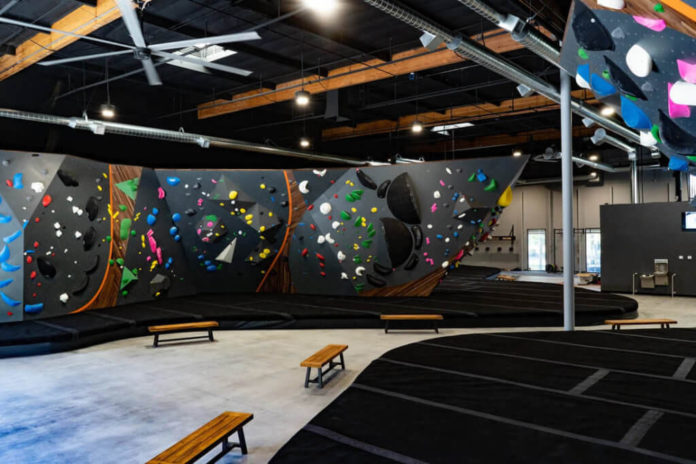 It’s no secret that the climbing gym industry has been booming. In the year of climbing’s Olympic debut alone, 60 new gyms opened across the U.S. and Canada, according to CBJ’s Gyms & Trends report. By 2023, there will likely be more than 600 unique facilities in operation on the continent. But behind the big numbers, on the ground it’s often local groups of hard-working people with a small focus who have been driving the industry forward.

“Climbing can be viewed as a big business because it is growing and there are lots of people involved, but I think the reason why the sport got there is because of a small focus,” said Mark Fraser, General Manager at Flashed. “It’s like when you’re on a climbing wall, in the moment all that’s important to you is just the things that are immediately around you. Maybe you have a lot of things going on in your life, but for that moment, it’s super small and it’s just you and the immediate challenge in front of you.”

Flashed, based in Calgary, Alberta, was started by Walson Tai and his wife Rhonda before the big boom in the climbing industry. With a small focus on an immediate need in front of them, they began by making and selling chalk balls from their basement. Now Flashed has grown to include a suite of retail products and the production and installation of commercial flooring.

The Tais grew their operation from making chalk balls to producing crash pads and clothing, all from their basement. Eventually they opened a gym as well, Calgary Climbing Centre.  At that point, the sport of climbing was smaller and more intimate, and the gym did not even fill an entire warehouse, so Flashed moved its production operation into the back of the gym. Fraser met the couple while going to the gym to climb. With a background in engineering, he took his curiosity in tech and applied that to the products that Flashed was producing. He has now been with the company for 18 years. “Starting small and growing and becoming more visible and available to the broader climbing community as it also grows is an important aspect of who Flashed is,” Fraser said.

From the start, Flashed took a scientific yet functional approach to developing products. The company had the benefit of using the gym on the other side of the wall to test out technology and ideas. Slowly they transitioned from making and sewing crash pads to repairing ripped flooring to producing their own flooring. First the company began making flooring for climbing walls at schools, excited to create a safe space for kids to learn and discover. Then in 2010, as the climbing industry was beginning to change and grow, Flashed got its first commercial padding job.

“At that point, every crash pad manufacturer would put on their website, ‘We have the best dual-density foam!’ But no one really knew what that meant,” Fraser said. “How do we qualify that, how do we determine what’s better? So we went through a crazy phase of development where we asked a lot of questions and learned a lot of new things.” A common method of testing pads at the time was to measure the impact force that went through pads with a sensor placed underneath the pad. “Well, for us, we weren’t really concerned about how the pad feels about the impacting body. What we’re concerned about is how the body feels about the impact.” Flashed looked to the playground equipment industry and learned that it had some interesting testing methods that measured the G-forces inside a test missile as it landed on a surface. They decided to apply these test methods to Flashed’s pads.

Using the results of this testing, the company experimented with different densities and stiffnesses of foam. They realized that in a single layer pad a climber can feel the energy of their fall bounce back into their knees. Flashed wanted to remove this jarring double-bounce and learned that, by using layers of foam that went from stiff on top to softer on the bottom, the double-bounce could be greatly lessened, which maximized the user experience. A gentler fall means that climbers using that pad surface may have more longevity in the sport. Flashed began to include memory foam into their pads, which further helped absorb the force of impact. “If you land on a Flashed pad with memory foam, you’ll know right away. It definitely has a different feel and falls are more controlled,” Fraser said.

After creating comfortable and functional padded flooring, the company next reexamined the flooring surface. Vinyl had become really popular, but it also felt rather sterile. It only came in a few colors. The people at Flashed wondered if there was a way to create a warmer and more homey feel by using a composite of a softer material. According to Fraser, Flashed became the first company in North America to offer flooring with a soft carpeted surface laminated to vinyl.

Flashed’s latest flooring development is custom printing on flooring, which allows a gym to create a unique space either through branding or an artistic look or feel. Customers can upload images that they have the rights to―such as a piece from their favorite artist or an image of their favorite climbing area―and have that printed on the flooring. This allows gyms to utilize the large surface area of flooring and make their space stand out.

In addition to flooring, Flashed sells products such as chalk, chalk bags, crash pads and bouldering brushes. With each product the company aims to produce and sell them in a manner that’s as environmentally conscious as possible. This includes reducing plastic and packaging wherever possible.

For example, they noticed that the plastic buckles on crash pads were constantly breaking and have switched to all metal buckles. Most of their bouldering brushes are made with wood and boar hair rather than plastic as well, and climbing tape is sold with no packaging at all.

Now that many gyms have transitioned to liquid chalk, Flashed is trying to develop ways to reduce the packaging for that product too. “Coming up at CWA we will be showcasing our Liquid Chalk Pure through a refill station,” Fraser said. “Once you buy the initial product, you can come back and get it refilled as many times as you want. Each refill obviously is saving the creation of another plastic bottle.”

Through all of Flashed’s growth and product innovations, one value has remained central: community building through the sport of climbing. “There are a lot of reasons for division in society currently,” Fraser said. “When you show up at a climbing gym and you’re working on a problem, within a few minutes you might have a conversation with someone right next to you. You may never even learn their name, but you end up shouting words of encouragement. At the end of five minutes, somehow you’ve developed a bond. And that creates respect.”

Community is relatively easy to find in gyms, but the company encourages community through all aspects of its business. Flashed has a team of competitive athletes that they support because the spirit of competition is positive. Two of those athletes went to the Olympics and Flashed is looking forward to seeing climbing included in future Olympic competitions. Flashed also provides support to events that have similar values of including all people, such as the Flash Foxy festivals and Cruxing in Color.

“Climbing has an opportunity to bring people together in a way that some other sports don’t because it has consequence,” Fraser said. “In the gym you might go up to someone and say, ‘Hey, would you mind giving me a belay?’ And you’ve never met this person before but they’ve got your life in their hands. As a result, you have an immediate connection. That’s why we believe really strongly in the sport and why we want to see it more actively participated in.”

Begun over 20 years ago, Calgary-based Flashed has grown from a start-up basement operation into a climbing gym flooring leader in North America. In addition to high-quality padded flooring that is scientifically developed, Flashed also produces chalk, chalk bags, crash pads and bouldering brushes, while striving to be as environmentally conscious and community-centered as possible. Now offering custom printing on flooring.