Press Release:
After a grueling nine months, SLO Op Climbing is about to give birth to its newest baby, flagship bouldering gym The Pad. Over three times the size of SLO Op’s current gym in San Luis Obispo, the new gym features a yoga studio, weight room, terrain for specific climbing training, kids’ wall, and 5000 sq feet of exciting climbing terrain. Membership to the club includes access to both locations, free climbing shoe use, and free yoga classes. A robust youth program is being developed as the gym grows, as well – with scholarship opportunities available.

SLO Op Climbing is a 501c7 nonprofit social club that started over a decade ago in a small storage unit in San Luis Obispo, California. Its founders were Cal Poly students and community members and it grew from a small group of people to over 1000 members in its current facility. The gym’s buildout was funded by crowdsourcing from the local community: “We’ve been doing that for every incarnation of the gym,” says Kristin Tara Horowitz SLO OP Executive Director, “We’re even in national bestselling $100 Startup for doing this before it had a name. It’s a great way to validate an idea before investing too much time and money into it.”

The idea to bring the gym to Santa Maria came from Horowitz’s love of the people of northern Santa Barbara county. Horowitz was an English lecturer at Hancock College for five years, and her investment in the community there allowed her to convince people that the gym would be a success. “We were just kids doing something fun for our tiny climbing community during our years at Poly,” said Horowitz. “But over time, the club is something so much more – people don’t start out as climbers when they come, but they not only become them over time, they forge deep friendships, meet partners and spouses, and spark really cool, creative collaborations in SLO and beyond. I really hope we can do the same thing for Santa Maria.” 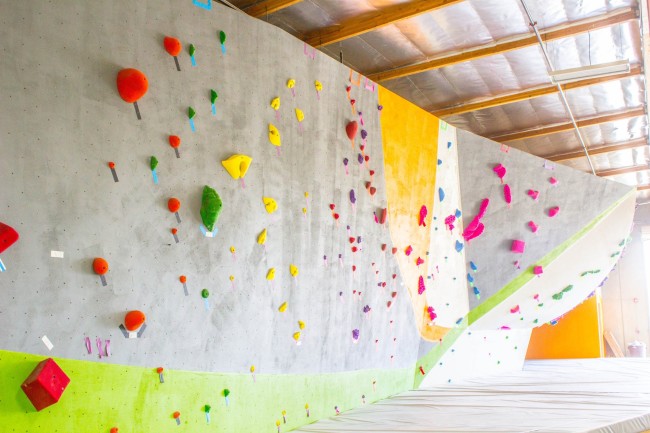 The gym’s build was done almost entirely by SLO Op members, staff, and eager Santa Maria area residents. “From the contractors, to the painters, to the electrician, they’ve all contributed their efforts to help us get this off the ground for a lot less than a normal contracting job would be; putting in real elbow grease to build something you believe in is the SLO Op way,” says Horowitz, who built and designed The Pad alongside her husband, Yishai -. Even the gym’s manager, Dustin Wise, has been spending long hours alongside the paid contractors, hiring staff and working to prepare the gym to open during breaks.

After months of significant delays, the gym is poised to open and hopes to make its mark in the climbing world. Over three times bigger than the existing SLO Op location, The Pad, features a 10,000 square foot warehouse with truly aggressive and ground breaking terrain. Designer Yishai Horowitz’s goal is to maximize space, push boundaries of design and aesthetics, and he took his over ten years of experience visiting gyms and operating the SLO Op in various stages to figure out what would work best for the club. You’ll find steep, inspiring terrain when you visit, that’s for sure. It’s stand out features are the wave wall to snow-cone, a slab wall giving way to an arching arete and the impressive archway (inspired by the bill of Yishai’s ubiquitous ball caps) that’s so big the city required fire sprinklers installed in it. 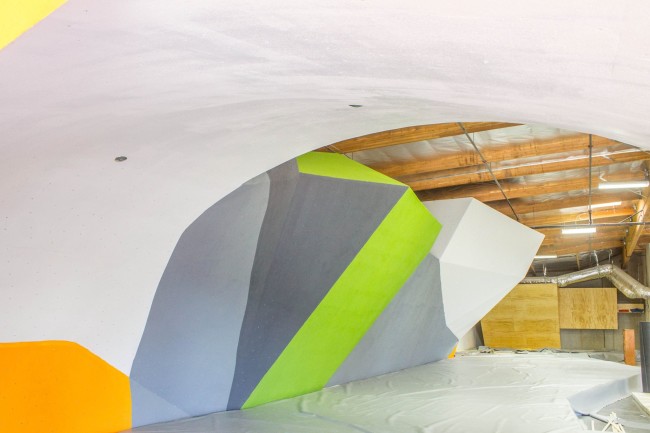 SLO Op Climbing is a 501c7 non profit social club that’s been around in various forms for over ten years, and was the country’s first non-profit bouldering gym. Despite its name, it is not a co-op. It started out as something close to it with its first build and fifteen members in a storage unit, but over the years, the club has burgeoned to over 1000 members and a 3500 square foot facility with weight room and yoga classes. SLO Op is a club that maintains facilities and programs that better the climbing community and does regular outreach to at risk youth and veterans in the area. Membership with SLO Op grants access to both the SLO Op 24/7 facility and The Pad’s extended hours facility (we hope to make it 24/7 as well over time as the community builds).

What are SLO Op’s next goals? “Definitely a larger facility in San Luis Obispo,” says Horowitz, “But that’s a much more expensive proposition that we hope The Pad will be able to help fund.” Any other locations? Time will tell. SLO Op’s grassroots and cost-effective approach to building gyms is getting harder and harder to execute with increased regulation requirements at the local and state levels, so expansion really depends on the resources available at the time. SLO Op welcomes inquiries from anyone interested in getting started with their own project.