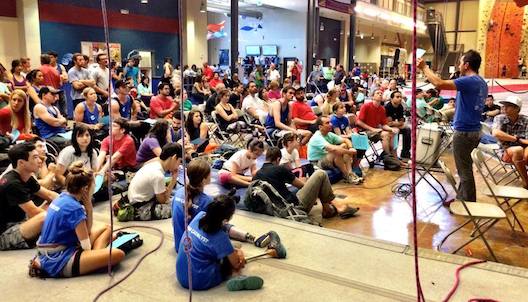 This inaugural championship event for roped paraclimbing was organized by USA Climbing, the national governing body of competition climbing in the US. The event served to officially select the US Paraclimbing Team that will be eligible to compete at the Paraclimbing World Championships in Gijon, Spain this upcoming September.

Kareemah Batts, founder of the Adaptive Climbing Group, and fourth place metalist in the women’s lower extremity amputee category, said that while competing was exhilarating, the most exciting aspect of the weekend was making history. “You could feel the energy everywhere. It was different from anything we had ever done, and the positive and nervous energy was just oozing from every hold, every chalked limb, all over everyone’s faces,” she said. “We had so many supporters and spectators, I think they quickly saw that the next competition we are going to need more space.”

The event followed a redpoint format, and while the competitors could climb any of the 35 routes set for the event, the routesetting team designed between five and eight routes with each category of disability in mind.

The event’s Chief Routesetter, Mark Mercer, said that setting for disabled climbers requires a lot of planning and attention to detail. “It’s a lot of things you wouldn’t necessarily think about in your normal routesetting,” he said. “For example, setting specifically for the blind, they have trouble putting their feet on a precise part of the hold. With their hands it’s not that much of an issue because they can feel it. But with their feet they have less sensitivity and they can’t see where they are placing it.”

Mercer said that many of the routes set for upper extremity amputees featured larger profile holds that competitors could use to wrap their amputated limb around. They also placed several of the routes designed for this category in a dihedral so that competitors could stem between the walls — otherwise they end up doing a lot of one-hand dynos the whole way up the wall.

The biggest challenge for the routesetting team, however, was not knowing the caliber of climbers that would show up for the event. Even though this was a national championship, there were no qualifying rounds. “Anybody can register for this, so technically some of these competitors could never have climbed before in their life, or maybe just a few times before, and they thought this would be something fun to try out,” Mercer said. His challenge was to design enough routes that would challenge the upper end of the field, while offering everyone the opportunity to add routes to their scorecard.

Overall, Mercer was excited and grateful to be part of the event. “I’ve learned a lot just the past couple of months thinking about how I will set for the event — thinking about body position and movement. It makes you think about routesetting in a different way than you normally do,” he said.

This event is several years in the making. Back in 2011 when the International Federation of Sport Climbing organized the first World Paraclimbing Championships in Arco, Italy, there were no American competitors. In 2012 during the second World Paraclimbing Championships in Paris, France, the US still did not have an official paraclimbing program, but was able to send two athletes, Ronnie Dickson and Craig Demartino to represent America.

Dickson told CBJ, “Craig and I were nominated simply because we were the only two athletes interested in going. Thankfully we happened to also be very qualified for the task and took 3rd and 6th place in the leg amputee division.”

USA Climbing started its official paraclimbing program the following year. Kynan Waggoner, CEO of USA Climbing, said, “After seeing the passion that these climbers possess for the sport of competition climbing, it was the next natural step.” That year they offered paraclimbing bouldering as part of USA Climbing’s citizens competitions at ABS Nationals and the GoPro Mountain Games in Vail, Colorado.

Dickson, a member of USA Climbing’s Paraclimbing Committee, said that piggy backing on these existing events was a challenging way to start the paraclimbing program. “We did not have any special route setting or accommodations for the athletes, so we were mainly working with athletes who were capable of rising to this challenge,” Dickson said.

With this year’s Paraclimbing National Championships, even though the event was held the week following the SCS Youth National Championships, the events were independent, and all new routes were set specifically with adaptive climbers in mind. Dickson, who placed second in the men’s lower extremity amputee category and earned himself a spot on the US team, said he is excited about the progress paraclimbing has made in the US. “We are much further past [where we were in 2012] and are at the point where we have a body of athletes big enough to where there has to be a way that we can objectively select our representatives and the spots have to be earned,” he said.

USA Climbing’s Paraclimbing Committee helped promote this event primarily through an existing network of disabled athletes and organizations such as the Adaptive Climbing Group, Catalyst Sports, Peak Potential, and others that support climbers with disabilities, often called adaptive climbing. The Committee hopes it can continue to expand the event to a broader group of competitors since access to these programs across the country is limited. “Ultimately going forward … we need to work on making more connections with rehabilitation centers, recreational therapists, and other publications within these related fields to further spread the word about our event,” Dickson said.

From USA Climbing’s perspective they’ve already accomplished the biggest obstacle, which was getting the process started. “Beyond that, I think that the short term challenge is to ensure that we are categorizing and judging the athletes fairly and appropriately. It is obviously a very young discipline of competition climbing and all USA Climbing is trying to do at this point is learn the intricacies inherent with servicing such a wide range of ability levels,” Waggoner said.

Ultimately for paraclimbing to continue growing and increasing the caliber of competitors that America sends to World Championships, we need more people with disabilities getting into the sport. One key component of this goal is for commercial climbing gyms to reach out to the adaptive community.

“Climbing gyms can help grow the movement by becoming involved. That can be as simple as having … staff/volunteers who are working with healthcare/rehabilitation professionals in their area to help provide opportunities for people with disabilities to experience climbing,” Dickson said. “Creating the opportunity is the most important piece to the puzzle. “