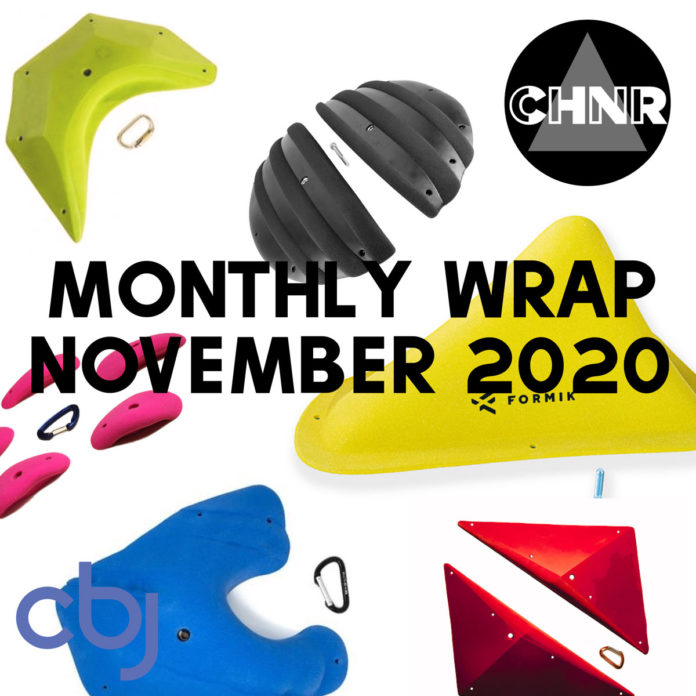 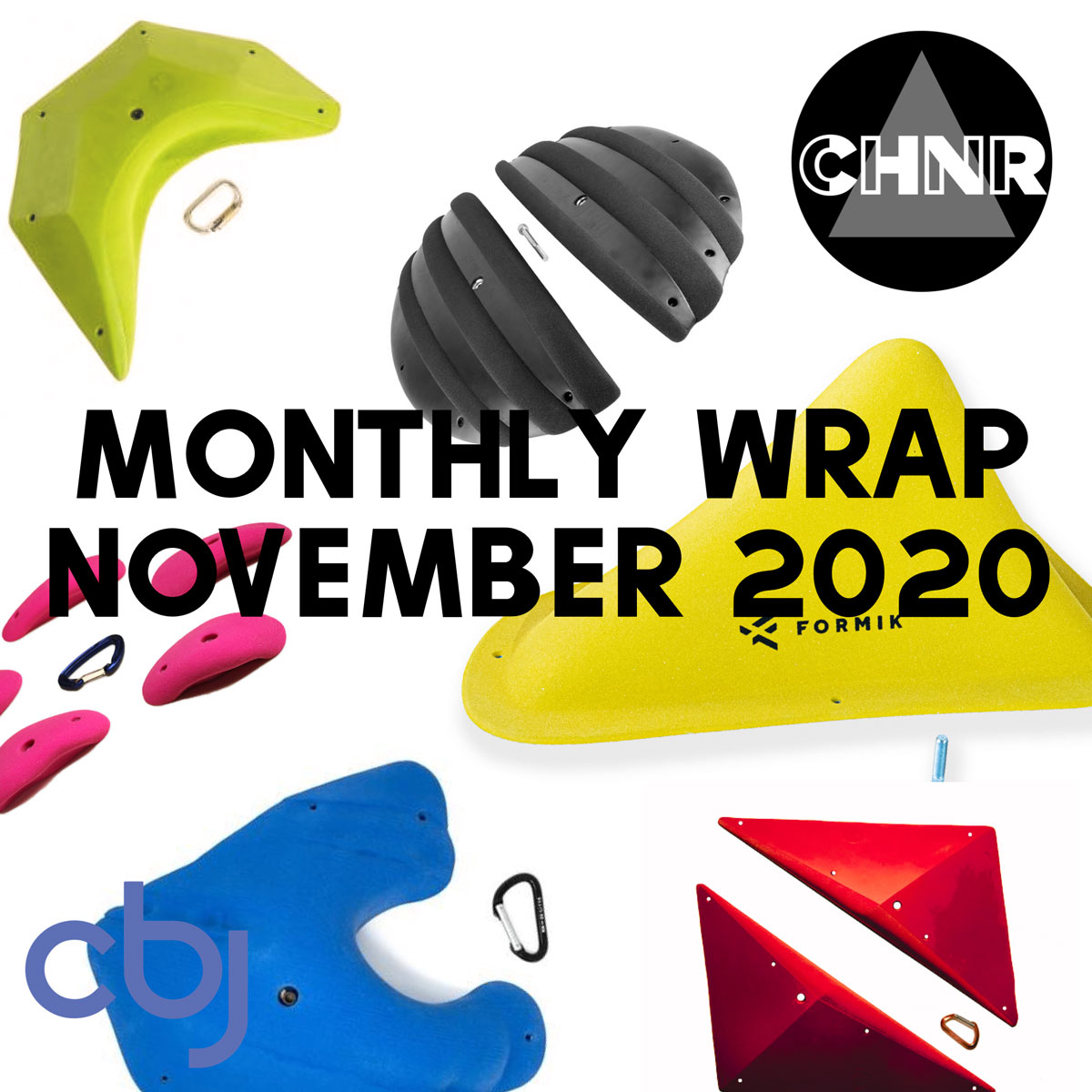 Welcome to the November Grips Wrap in cooperation with Climbing Hold News Reviews, where we bring you the latest in climbing holds, macros and volumes each month.

As we head into end of year celebrations and gift giving, there’s one gift your setting crew is sure to appreciate and actually use: new grips. Companies are still releasing fresh shapes as 2020 comes to a close, and here are some of the latest developments.

We hope you love this as much as we do! 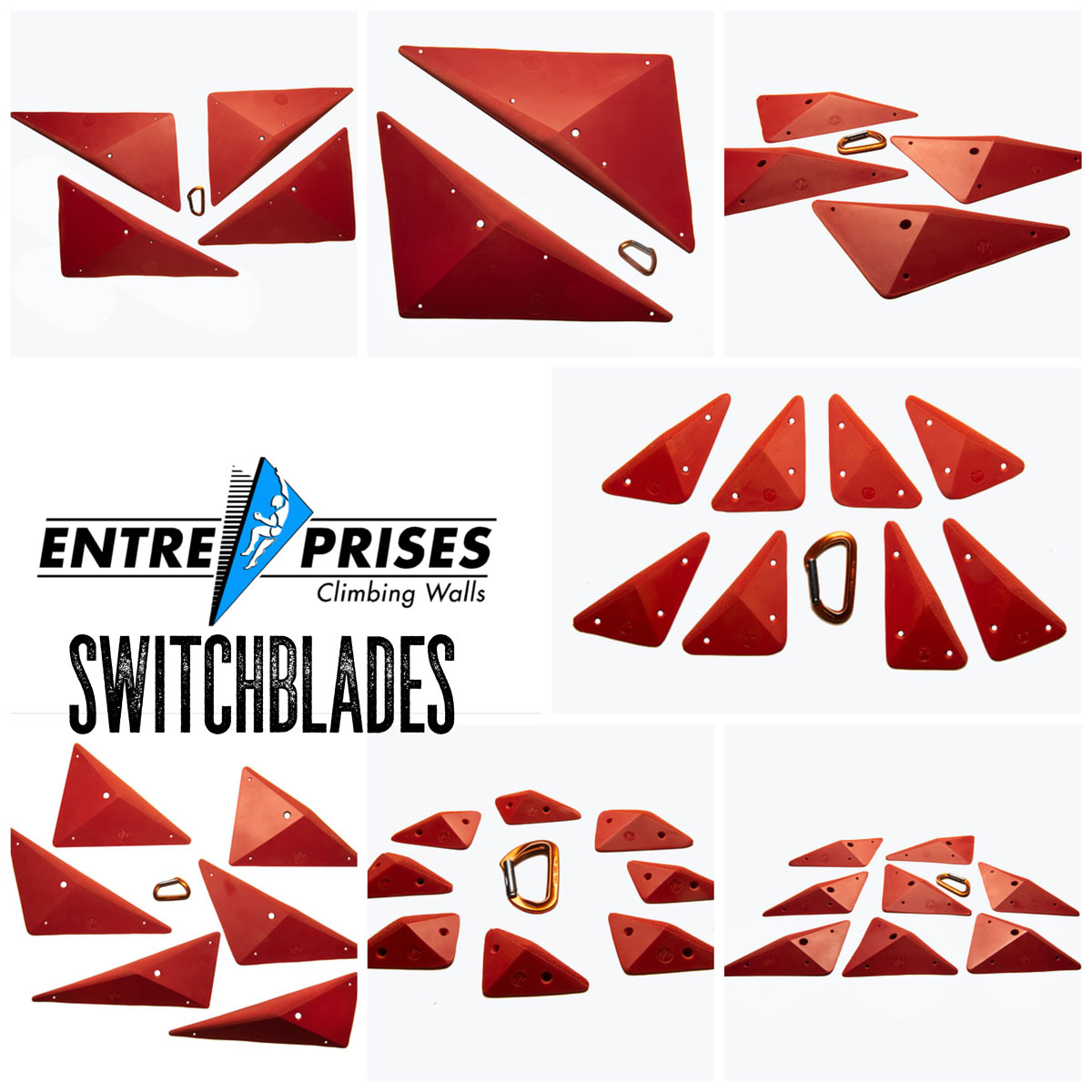 Entre-Prises USA, based out of Bend, Oregon, has been a staple in climbing walls and volumes production for years. EP has also been creating holds as well and are firing on all cylinders in 2020, with many modern releases of late. The Switchblades are the latest shapes in a new Setters Series range, which are dual texture, triangular-angled holds in a variety of 3 XL to XS sizes. The holds are also designed to either be bolted or screwed-on and allow for blocking, stacking and creating thin seams. The Switchblades are available now through the EP USA website. 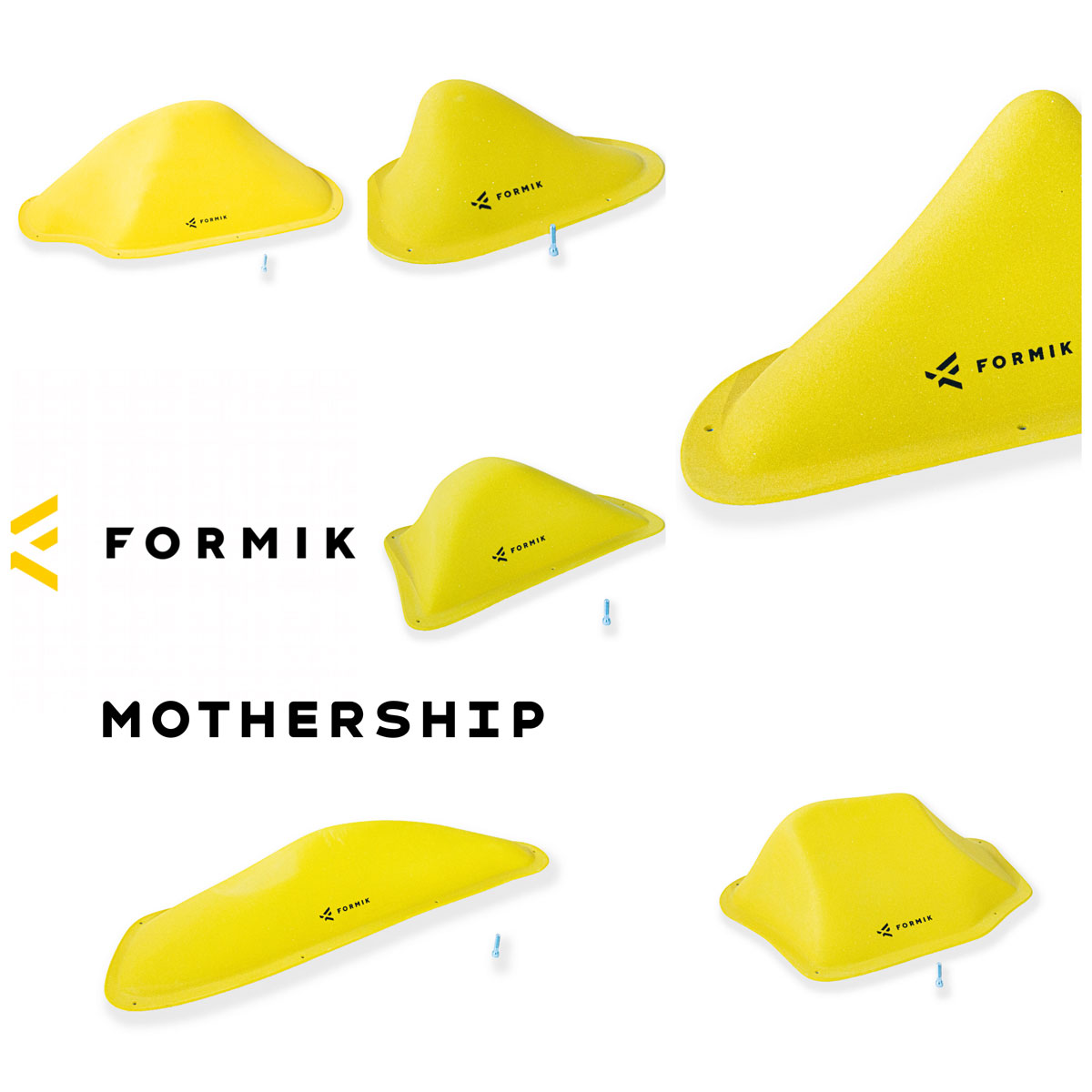 Formik Holds is the sister-company of shaper Andy Raether of Menagerie Climbing. Formik’s latest release is the Mothership Macros, which are manufactured in partnership with Blocz Climbing. These are smooth bulbous slopers made of Blocz Fiberglass and comprise six very large shapes. The Mothership Macros are available through the Formik / Menagerie website. 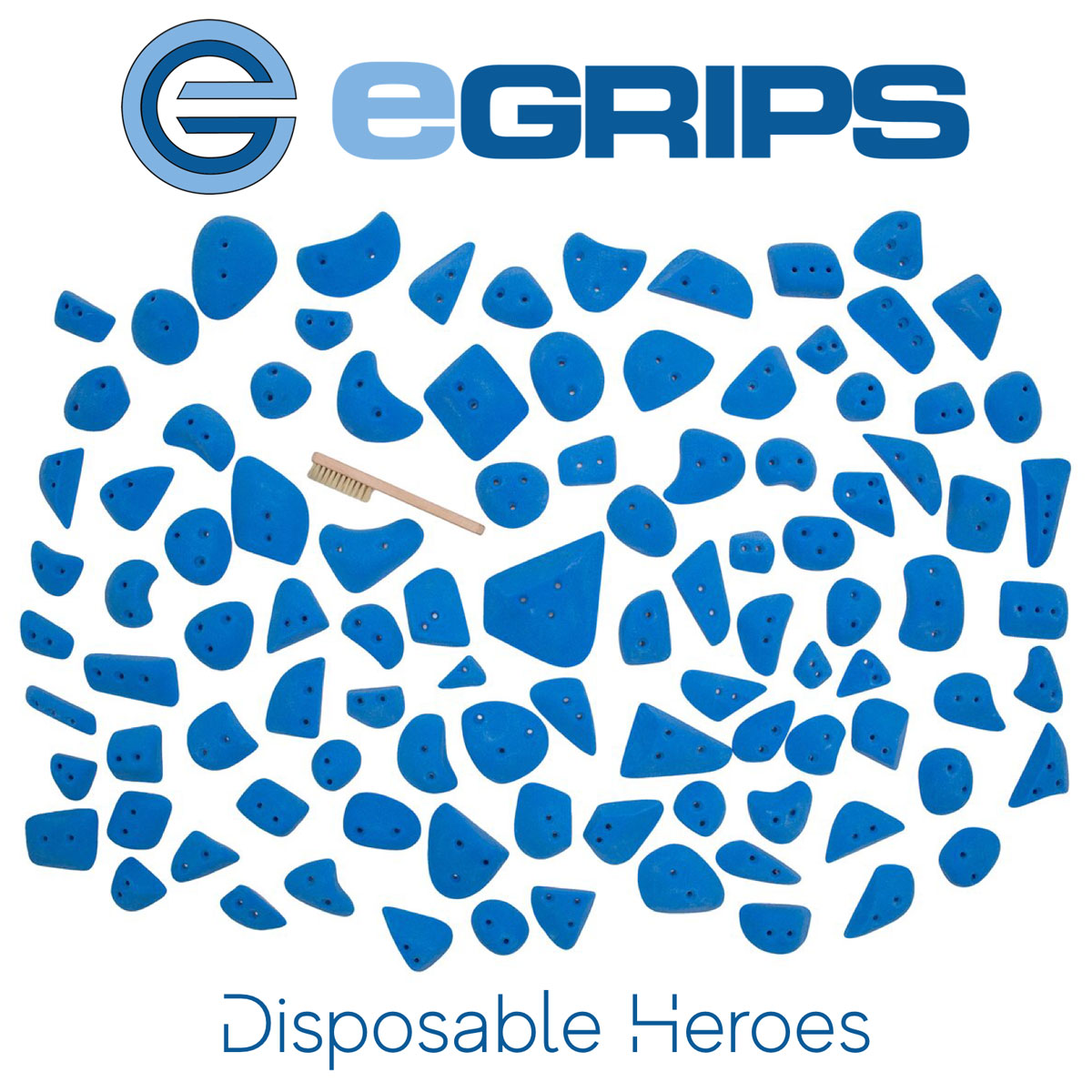 eGrips has released the Disposable Heroes set, which are 100 small holds named after the classic Hueco Tanks boulder problem. This set of screw-on only shapes are designed to fill in small gaps where larger holds “just won’t fit.” The screw-ons are shaped by Trevor Turmelle and make for practical additions to volumes or other wall features where bolts just don’t cut it. 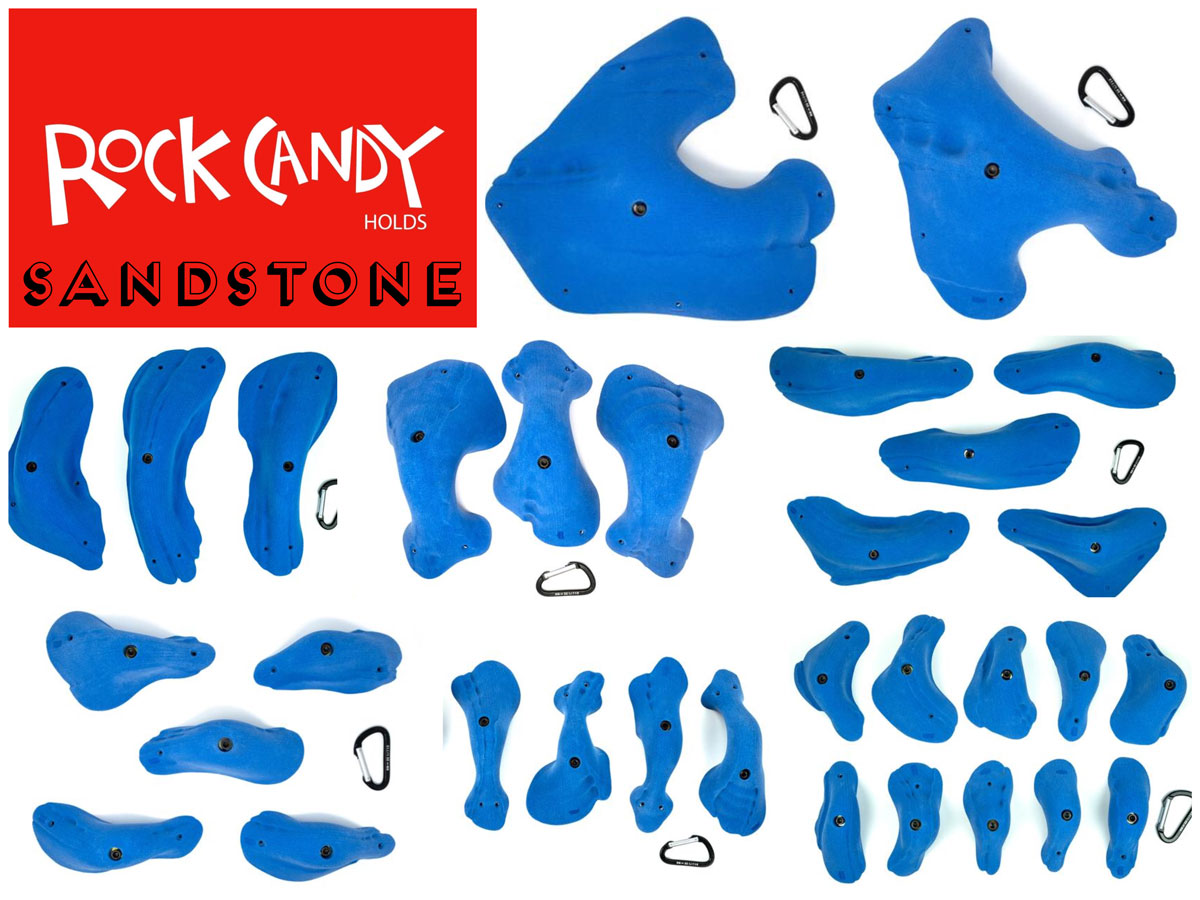 Rock Candy Holds, based out of Akron, Ohio, released a brand-new, comprehensive line aptly called the Sandstone series. The series was created by veteran shaper Christopher Neal and marks the first range Neal has shaped for the brand. The Sandstone series combines smooth textures with grooved striation for an eye-catching aesthetic and contains pinches, edges, handles and huecos. The current series encompasses 78 different holds, ranging in size from feet to features. The holds are available now through Rock Candy’s website. 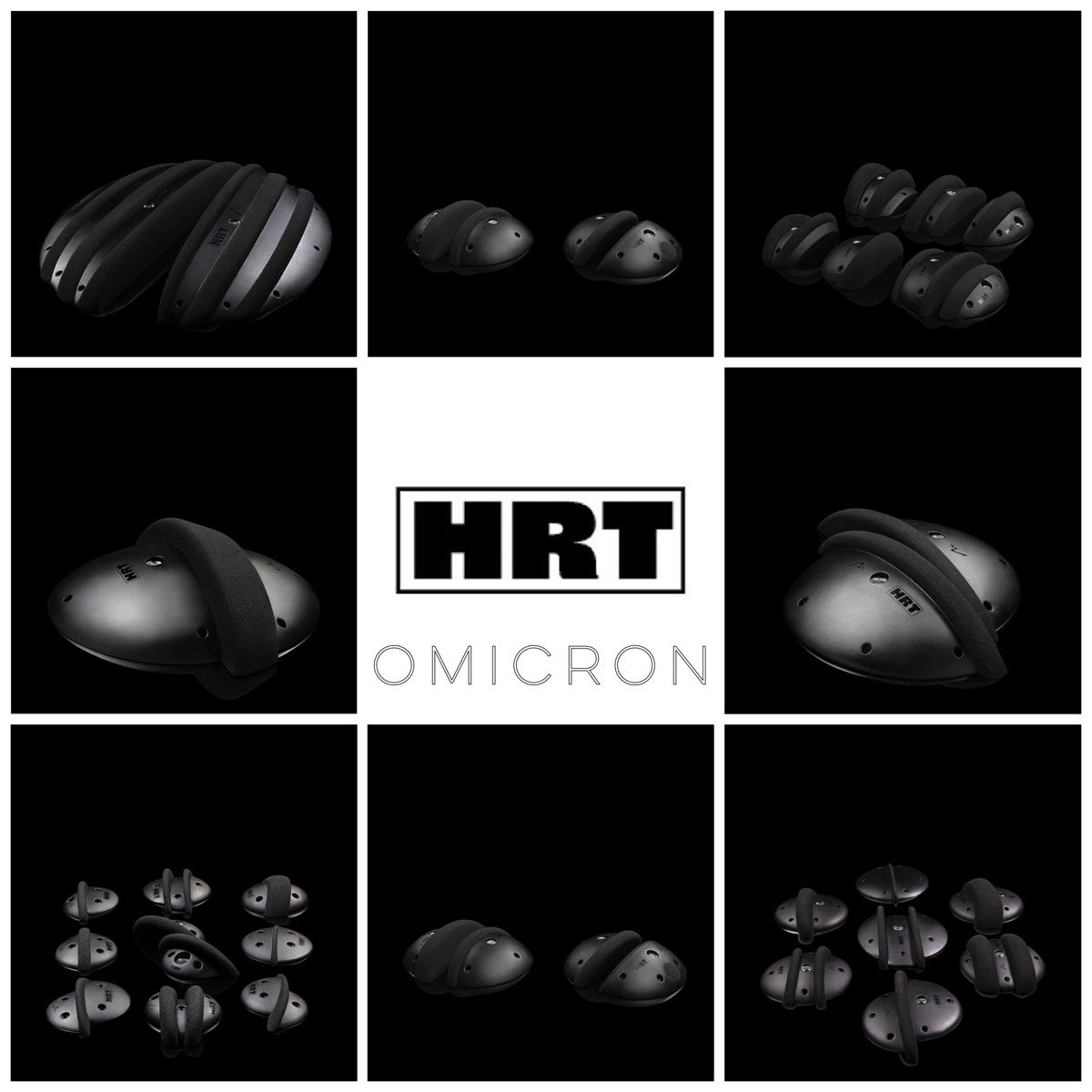 HRT is a well-known European brand which is gaining recognition stateside. The company released a new HRT by Artist series, and the latest grips are by shaper Dario Stefanou of Ibex Climbing Holds / Thrill Seeker Holds. The Omicron series is a very technical line of matte dual texture spheres and embedded ridges that can be used in many ways, from blocking to creating seams / gaps. The holds range in size from XS to Mega and Volume and are sure to catch attention. HRT is also constantly looking for artists / shapers to collaborate with on new projects. 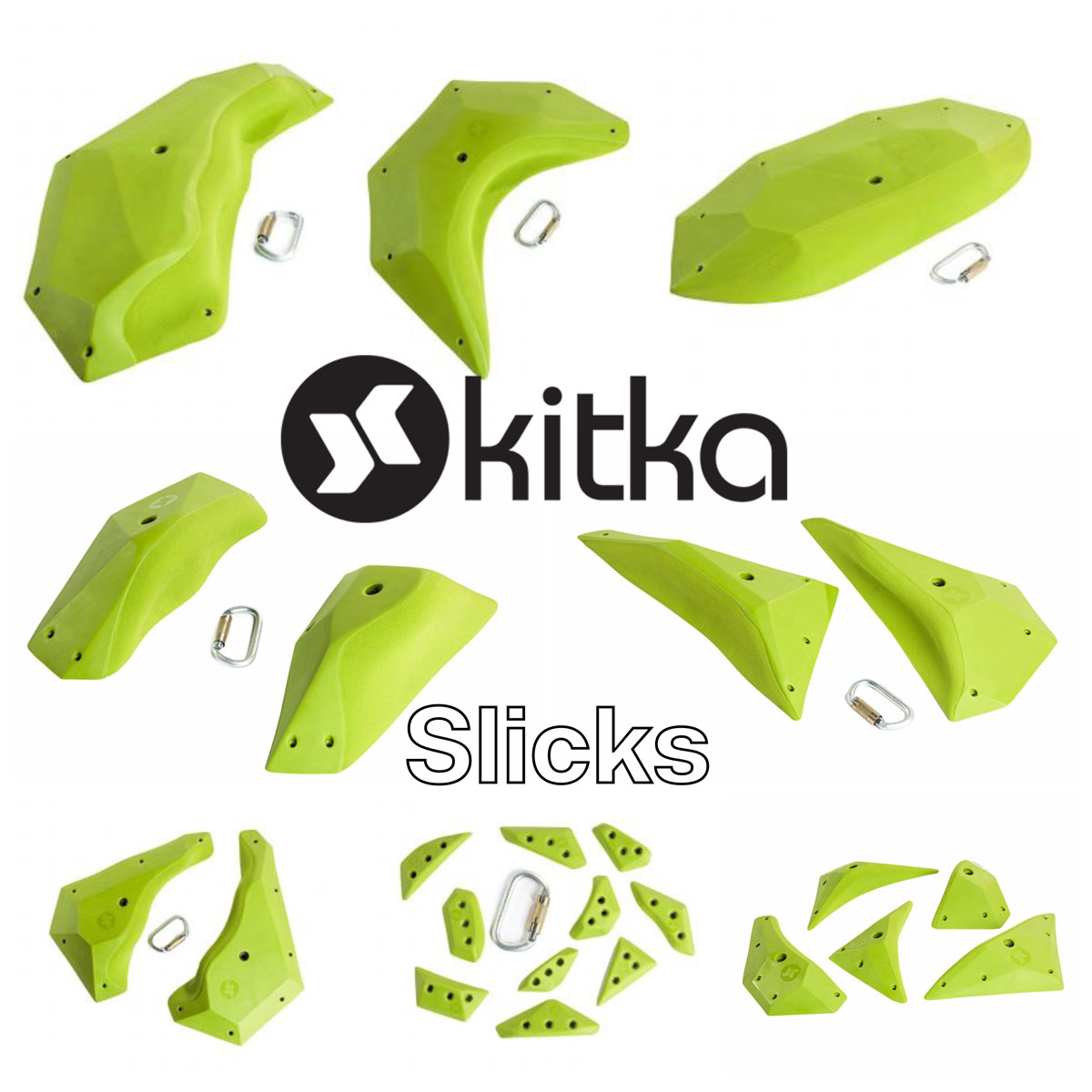 Kitka Climbing are best known for “climbing holds with a Scandanavian touch,” as the company is based out of Oulu, Finland. The brand’s latest line of holds is called the Slicks, and for good reason. The line is comprised of primarily big holds with a matte dual texture, designed for medium grade boulders on moderate angle walls―although the holds can also be found on steeper walls and a variety of settings. Even the largest of the holds are low profile, so they also work on slabs at home. Kitka Climbing is produced at Composite-X in Sofia, Bulgaria. 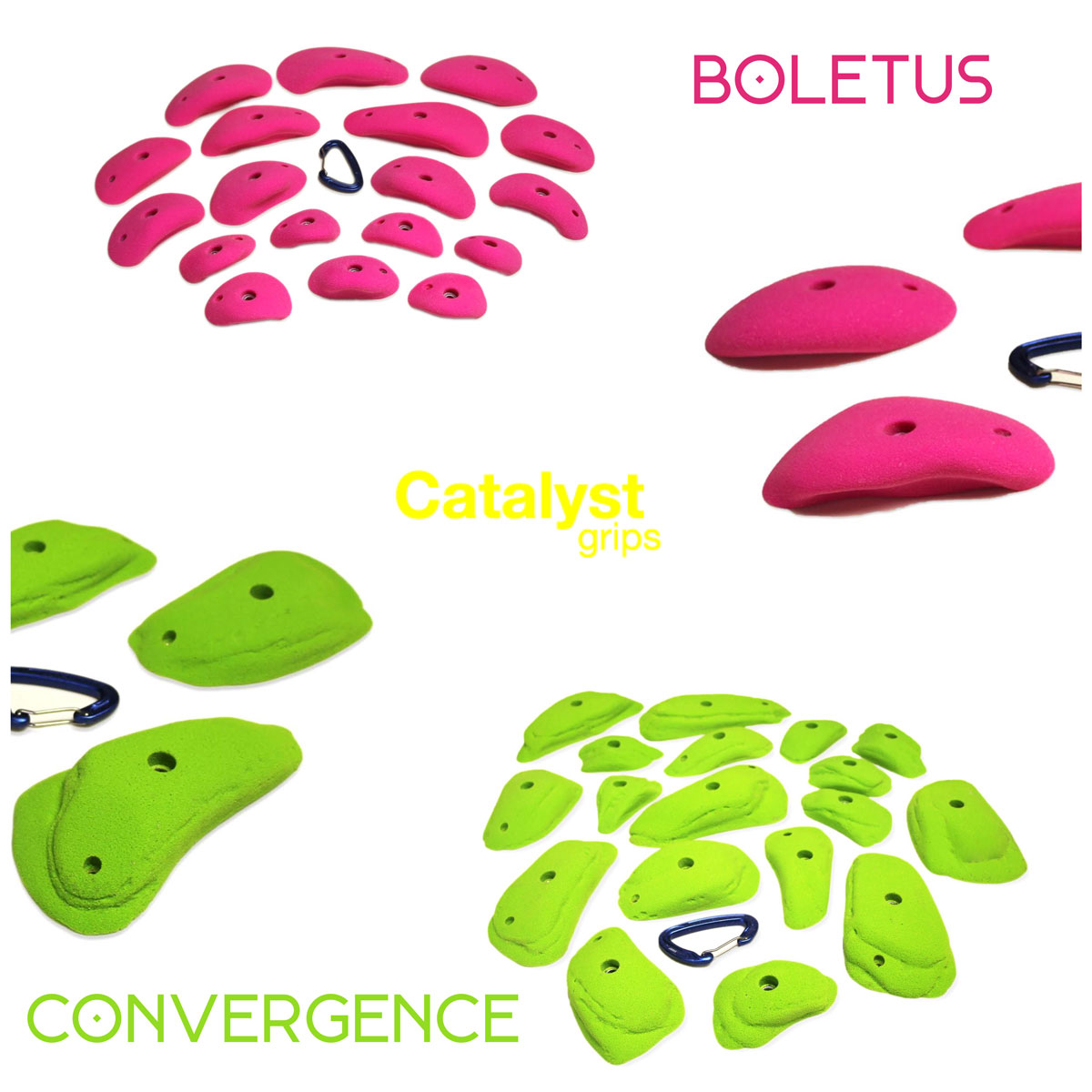 Catalyst Grips is based out of Mt. Hood, Oregon, and was created by shaper and owner Steven Higdon. Recently the brand has caught attention by adding experienced shapers such as Joey Jannsen and Kegan Minock to the team. In fact, Jannsen just released the natural-rock-inspired Convergence Pinches series, and Minock added the smooth Boletus crimp series to the Catalyst Grips lineup. Higdon also has several other series such as the Fontevein Pinch, Lolo Jugs and Cascade Edges, which are poured in-house and available via the company’s website.

Check out climbingholdnewsreviews.com for even more updates and new releases on a weekly basis. Thanks for joining us! We’ll see you next month!