More Americans participated in climbing activities in 2015 than in 2014, according to a report put together by the Physical Activity Council and PHIT America.

4.6 million people participated in either sport climbing, bouldering or indoor climbing last year, ranking climbing seventieth on the list of the top 111 activities in America — just beating out gymnastics, track & field and a number of other traditional sports (traditional, ice and mountain climbing also made the list at number ninety-five with 2.5 million people participating in 2015).

PHIT America compiled their list of the top 111 activities and sports for 2016 based on the PHYSICAL Activity Council and Sports Marketing surveys.

Climbing and all its forms (even indoor climbing) are counted in the report under the “outdoor” category. When taken together, all “outdoor” activities remained flat, which is a continuing trend since 2012, decreasing, on average, 1% over the last 5 years.

This flies in the face of the general assumption that the crags and trails of America are becoming overcrowded. This statistic also contravenes the exceptional growth climbing gyms and the climbing industry have experienced over the last five years. However, upon further inspection it makes a bit more sense, since climbing is lumped together in the report with a myriad of other activities, such as birdwatching, camping, snowshoeing and wakeboarding, among others.

When it comes to being active, the Gen Z population (born in 2000 or later) prefer outdoor sports (62%) and team sports (57%), being the highest participation rate in both categories compared to other generations. This is great news for climbing gyms and those selling climbing gear. This age group has been in climbing gyms their whole life and are comfortable there. They will shortly come into adulthood and the financial independence that bestows.

In terms of interest, all age groups continue to look at swimming as a means for future fitness. Followed heavily by outdoor activities, such as camping and biking. Fitness activities are featured high on the list for most adult age groups while team sports are more attractive to the youths. 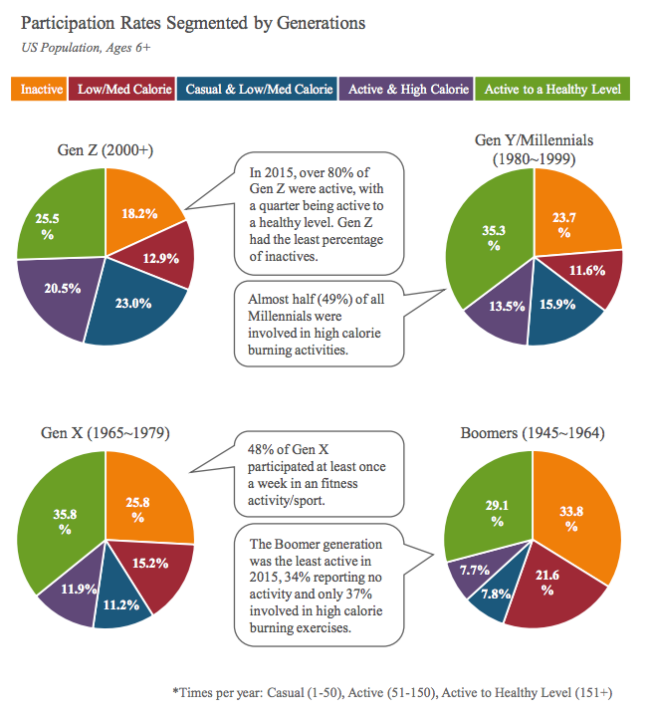 The report stated that while these rates seem to fluctuate over the last five years, the 2014 to 2015 decrease (0.6%) is the largest drop since 2010. This showed that 1.2 million people who were inactive in 2014, participated in a some sort of fitness activity in 2015. Although this doesn’t make up for half of the Americans who became inactive in 2014 (2.6 million from 2013), the 1.2 million additional active people in 2015 was the most gain of active people over the last five years

“Inactivity” is defined to include those participants who reported no physical activity in 2015 and an additional 18 sports/fitness activities that require minimal to no physical exertion.

The report also tracks those individuals that wish to be active but for reasons of their own are not. These “aspirational” participants reported that having someone to participate with or having a friend bring them along would be a strong motivator to start a new activity. While having more free time was mentioned to be helpful, more people felt that their current health was a big hindrance.

“One of the most important findings of this report and an overall trend that we’re seeing across activity sectors is people prefer to participate with friends,” Christine Fanning, executive director, Outdoor Foundation, said in a statement. “As we try to engage new audiences, it will be critical to highlight, promote and even expand the social aspects of activities.”

Climbing is essentially a solo activity, yet it is also a very social one. Climbing gyms in particular have used the power of community to market to those people that are not attracted to traditional sports. And gym operators should use this report to set up special events in which members are encouraged to bring a friend or other social gatherings.

There’s more information and a further breakdown of demographics in the full report. You can also find the methodology of how the report was put together.

PHIT America is a non-profit campaign focused on promoting active, fit and healthy living through education, supporting school-based activity programs and other advocation.

Insider Tips To Getting a Climbing Gym Loan

New Missouri Gym Hopes to Make a Big Impact in Their...