The Art of Coursesetting, by Louie Anderson, first came out in 2004 and at the time was the only written instruction book for routesetters. The book covered all aspects of routesetting and was geared to helping novices improve their craft. Earlier this month Anderson quietly put out an updated version of AoC, now called The Fundamentals of Routesetting. This new book is still aimed at new routesetters, but has some additional topics and guest essays that are sure to inspire setters of all levels.

Anderson’s book is, ten years later, still the only written resource for routesetters. In honor of the release of the Fundamentals of Routesetting, we chatted with Anderson to talk  about the new book and his predictions for the future of the climbing gym industry.

The original setting book came out in 2004. Why did you feel now was the time to write an updated version?

To be honest, I was almost out of stock on the original print run of books. I suppose I could have just printed more of those, but it seemed like taking the time to update it and improve the overall appearance and quality of the book was the right thing to do.

Who is the book intended for?

I would hope that the book would be of value to anyone interested in setting, regardless of their experience. The entire book was written to present the fundamental approaches to many different aspects of setting, while leaving a lot of room for personal interpretation and exploration of each of them.

I don’t think that certain aspects of setting can be taught, so I intentionally did not get too detailed in my writing. I think that once setters have an understanding of things generally, that they need to spend time setting – working with others and exploring variations in their own setting in order to truly develop and be all that they can be as setters.

I expect that newer setters and those that have had limited exposure to the activity would benefit the most from reading it, but I also believe that it’s good for more experienced setters to constantly seek input on how to be better at what they already do. Whether the book actually teaches them anything new, or just reinforces what they may already be doing; I think it would have value to them as well.

What are some of the topics that you added to the new version and why?

There were no great areas of modification or addition. It was more a matter of minor tweaks and edits to keep things consistent with the current face of setting. For instance: more people are using impacts these days, volumes are far more commonly used, competitions and the style in which we set for them and organize them have changed. I basically opened the text on my computer and re-read the entire book, making changes and adding new content where it made sense to me as I went along.

I also wanted to contact a new group of route setters for the essays in this new edition. I realized that many of the people that purchased this book, may own or have read the original and I wanted to make sure there was something of more significance for them aside from the other revisions. This also gave me a selfish opportunity to solicit the opinions of several of the people I look up to in the setting world. After all, at the end of the day, I’m just another setter looking to get better and understand this whole pursuit better myself.

In your opinion has setting changed that much in 10 years?

I think a lot of things are the same, but there have been enough minor changes to how we set that this was a good opportunity to revisit things and update them as needed [in the book]. There are a lot more gyms being built these days and a lot more hold companies on the market. With these additions come new ideas and ways of doing things. To some degree, I think routesetting in general will always be evolving.

Are climbing gyms taking route setting more seriously than in the past?

I certainly hope so. I know that many of the larger and newer facilities definitely are. I see them actively pursuing notable setters to run their programs, and I see a lot more emphasis on them developing professional setting procedures. More and more, gyms are realizing that the product they are selling to the public is a direct result of three things: The layout and design of their walls, their hold selection, and the routesetting that puts the two together.

I’d like to think that this trend will continue, and I hope to see some of the older gyms following suit. Everyone who owns or manages a commercial climbing facility owes it to their member base to offer the best product that they can. I think that many of the older gyms realize this more these days, as competing gyms open up in their market. What worked 15-20 years ago is no longer enough.

Looking into your crystal ball what is the future for climbing gyms and route setters?

That’s a big one. Here’s a few predictions:

We’re starting to see this already, but I would expect that we will see an even greater divide in facility types. Bouldering only gyms will continue to open and prosper. I expect also that we may see some gyms that focus almost exclusively on roped climbing, especially if they are sharing a market with a good bouldering facility. I could also see some operators opening a gym of each type in the same market, instead of building a blended gym that offers both. More and more, climbers tend to focus on one pursuit or the other. I expect that this specialization will occur more as the industry moves forward.

Likewise, I see route setters specializing. As the single focus climbing gyms open, their setting teams will become more specialized as a result. To a large degree we see this already with competition setters, and I think it will become more common in commercial setting as well.

The volume revolution has already infiltrated the US, but I think it will continue to take hold. With the big, open planes and large wall panels found in modern climbing gyms, volumes help to change the flavor of the climbing and are an easily modified component of the climbing terrain. I expect that we will see many more volume companies popping up and that we will see larger and larger volumes, with better and easier mounting options in the very near future. We will also see an increased amount of setting being done using the volumes themselves as holds, instead of piggybacking others onto them.

One other thing that I think will become more common is setting by hold color. This has always been my preference, and I’m happy to see that the majority of new gyms have made the commitment to go in this direction. Likewise, several older gyms are experimenting with making the change as well. With hold companies making efforts to standardize their color offerings, things are going to match better and be easier to decipher on gym walls, eliminating many of the arguments against this style of setting.

I expect also that we will see more bouldering facilities setting with colored circuits. In other parts of the world, this has been done with great success and it’s starting to be done more here in the States. While it takes a good hold inventory, and some forethought when ordering, to do well – I think the final result is worth the effort. In fact, this is something I’m considering for my own gym.

What’s next for you?
I like to stay busy, and the immediate future will be no different. I have two more climbing guidebook projects that I hope to finish in the next 18 months. There are always new shapes in the works. I have a number of gym designs and projects on the calendar. The next event of my Setter Showdown circuit [a reincarnation of the Kingdom Games] has been booked and will be announced in a few weeks. Finally, my bouldering gym, The Factory, is always evolving as I try to make it the best that it can possibly be.

Keeping true to form, Anderson is handling most of the book sales and fulfillment himself. To facilitate this process, CBJ has created a simple order form that will connect you to Anderson’s PayPal account. Order your copy now. 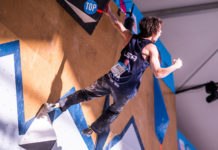 Selling Movement: Routesetting Is a Product (Truth Behind the Trade – Chapter 2) 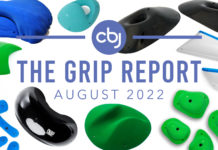 Storytelling Through Movement: Behind the Wrench with Holly Chen