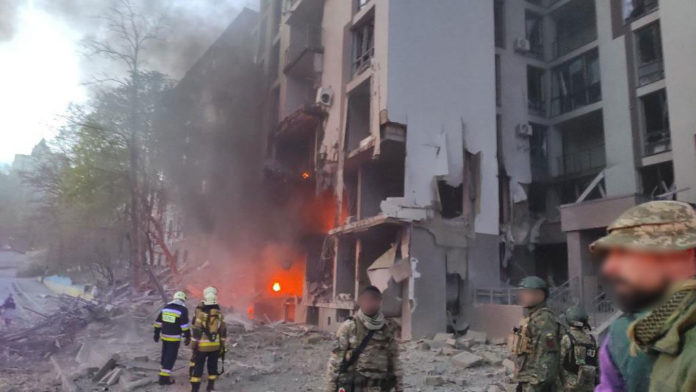 The war in Ukraine has impacted the climbing industry the world over. Still reeling from the economic shocks of the ongoing Covid pandemic, climbing gym supply chains linked to the region have had to navigate economic sanctions as well―complicating the construction of climbing walls, for instance, which are often made from Baltic birch. On the comp scene, athletes from Russia and Belarus were suspended from IFSC competitions, and World Cups in those nations were cancelled.

But nowhere have the consequences of the war been more devastating than in Ukraine itself, where millions of people have been displaced and lives have been destroyed. In response, “As Russia continues its invasion of Ukraine and commits devastating and indiscriminate military attacks on civilians, many in the climbing community have united from nations across the world to support and demonstrate solidarity with the Ukrainian people,” reported Natalie Berry on UK Climbing, listing multiple ways you can help. Ukrainian climbers, themselves, launched a fundraiser called Climbarmy “to help protect other climbers who are defending their country against invading Russian forces,” wrote Berry (donate here).

In the climbing industry in Ukraine, meanwhile, “Ukrainian industry workers consolidate their efforts toward repelling Russian forces. Ukrainian athletes take it upon themselves to fight for their country’s independence. Those that cannot fight vocalize a need for support from the communities in which they have influence. Although Ukraine’s climbing gyms have closed to sport, they remain open in support of resistance,” reported Noah Walker on Gripped, citing climbing gyms in Lviv and Kyiv which had become makeshift bomb shelters, humanitarian aid distribution centers, and refugee shelters (donate here).

Part of that story on the ground is UkrHolds, a climbing hold factory in Kyiv, and its partner company FormAT, a climbing wall manufacturer and climbing gym operator in Kharkiv. As the war drags on, workers at the two businesses have balanced fighting on the front lines with returning to work to provide for their families. In hearing from the owners and their business partners, the pride of the Ukrainian people is unmistakable. They didn’t ask for more donations at this stage, just the chance to tell their story. We are honored to do so.

UkrHolds first opened its factory at the turn of the millennium, in 1999. Ukraine had been an independent nation for eight years, since the dissolution of the Soviet Union in 1991, and at the time there were reportedly no other manufacturers of climbing products in Ukraine. Co-founders and owners Andrew Zhyhariev and Oleksandr Paukaev decided to change that in launching their hold manufacturing company, which officially became UkrHolds in 2007 and later teamed up with FormAT to solidify its market position. The wall manufacturing side of FormAT employs a team of 30 engineers, designers, installers and other professionals and, since its founding by Anton Grishkov and Nicolas Silevich in 2013, has completed over 60 projects in ten countries across Europe and Asia.

But on February 24, life at both workplaces drastically changed with the start of the Russian invasion. In Kharkiv, which is located east of Kyiv on the Ukraine-Russia border where the advances of Russian forces have been concentrated, many FormAT workers and their families had to leave their homes behind. In Kyiv, the nation’s capital which has been the target of Russian missiles since day one, the families of almost all UkrHolds workers were separated due to the conflict as workers stayed behind and enlisted in the fight. After helping bring his family to safety, Paukaev bought arms and joined the army, and Zhyhariev turned his attention to buying and transporting other logistics for the war effort.

“We are alive and well, which is the main success for people in Ukraine right now,” Grishkov told CBJ in an email. “From the beginning of the war, we moved our families from Kharkiv to a safer region. We left all our homes, cars, and many other things behind, with the hope to return in some time―if Russia doesn’t destroy it.”

Yet as the war has continued, so has day-to-day life and the need to return to work and make a living. After a few weeks, one of UkrHolds’ workers who was on patrol in Kyiv decided to check in on the factory. Surprisingly, the building remained standing, and the operation inside was still intact. In fact, a monthly hold delivery the team had been packing before the invasion was found exactly as it had been left.

That delivery was for French-based Digital Climbing Holds, one of four hold brands produced in the factory by UkrHolds’ team of seven employees. Digital is part of Les Arts de la Grimpe Distribution, a decades-old climbing gym and brand family located east of Paris. Proudly made by Volx―the French company which produces IFSC official speed holds―as the pandemic hit Digital sought a change of pace and decided to transition the bulk of its holds to fiberglass and dual-texture, but they required a new producer to do so. UkrHolds’ capabilities fit the bill, and soon Digital’s molds were on their way to Kyiv.

“We did an old-school agreement, a solid handshake,” said Roisin Boileau-Nigoul, co-owner of Digital with husband Frederic Nigoul, who founded Digital in 2010. “Through many months of exchanging emails, we realized that we shared both professional ambitions and ideals, so eventually, in August 2020, we flew to Kyiv and also visited the [FormAT] factories in Kharkiv. By October we were setting up in Kyiv and have never looked back.”

At the outset of the Russian invasion, Digital and UkrHolds’ discussions were far from business. “At first, all we could talk about was saving our friends and what we could do to help,” Boileau-Nigoul told CBJ. “Of course, our entire production came to a sudden halt, but we did not care. We were both in a state of shock and fear…Our conversation topics were only of night-vision goggles and wartime accessories.”

Eventually, with many UkrHolds workers on the wait list to enroll and Ukraine’s president, Volodymyr Zelenskyy, urging everyone who could do so to return to work to save the economy, the UkrHolds team and Digital agreed to restart production. “At first we were reticent to let the UkrHolds team work for us, as we did not want them in danger and, above all, we did not want to take advantage of the situation,” recalls Boileau-Nigoul. “But our friends in Ukraine said they all want to work, so that is what we are doing.”

Of course, working in a war zone is far from easy. “Literally between bomb scares they produce, while never neglecting their duty,” Boileau-Nigoul said. Especially with some of the more experienced workers on the team working for the war effort at the same time, maintaining top quality has been challenging. Raw materials were also harder to come by at first, with the UkrHolds factory’s previous supply chain for polyurethane completely grounded and other essential materials like boxes and sandpaper all missing. Even obtaining Digital’s metallic logo that goes on the holds was a hurdle, following the disruptions at FormAT’s factory in Kharkiv, where that part was produced. “But we have managed to find alternatives in Europe and continue production,” said Boileau-Nigoul.

FormAT had to pivot even further, moving much of its machinery to a new location and reorganizing distribution logistics. “We also partly shifted our climbing wall building production, so now we are mostly focused on adjustable boards,” Grishkov said. The company’s light-up Brand Board and mobile app system is one of the newest entrants to the training board market, a “100% Ukrainian invention with a full worldwide patent,” confirmed Boileau-Nigoul. But the Ukrainian wall manufacturer is still committed to being a leader in the climbing wall sector. “We are finishing a montage of a 5-axis machine, which will permit us to produce all kinds of climbing walls,” said Grishkov.

Alongside climbing walls, adjustable boards, and auto belays for climbing gyms, part of FormAT’s recent production has also been going directly to the war effort. “We help the Ukrainian army with special equipment supplies (quadrocopters, body armor, etc.),” detailed Grishkov, who mentioned a humanitarian project that’s in the works as well. “Being experienced in plywood goods production, FormAT started to develop modular houses for temporary migrants, which are totally ecological, safe, insulated and comfortable. This is the start of Ukrainian mobile modular houses in the climbing industry,” said Grishkov.

How You Can Help

With the war still raging, the immediate future for both FormAT and UkrHolds remains unstable, but fortunately many of their business partners have been reaching out and continuing to do business despite the delays. “We have had a huge amount of support from our usual partners in France and from our 13 distributors,” said Boileau-Nigoul. “We (Digital and UkrHolds) take all of the risks financially. All of the orders are only paid on delivery, as we cannot guarantee delivery nor meet deadlines. Other than that, it is business as usual.”

Usual or not, business has continued for many Ukrainians, and all who can do so are encouraged to consider supporting their work. UkrHolds and Digital’s latest creation is a special dual-tex series sporting the iconic blue and yellow colors of the Ukrainian flag, and when ordering there is an option to have the official support Ukraine logo added onto the holds. The new grips―shaped by Digital and made by UkrHolds in Ukraine―can be ordered here (English), here (French) and here (Ukrainian), with all proceeds going to keeping the UkrHolds factory going and the workers employed at a time when many businesses in Kyiv have closed. Already this month, the new series was used at the highest level of competition climbing, with the organizers of the European Championships in Munich featuring the holds in the bouldering portion of the women’s combined final.

If you would like to place an order for other climbing holds made by UkrHolds, email contact@ukrholds.com. If you are interested in becoming a North American distributor for FormAT’s Brand Board, contact brandboardclimb@gmail.com. For Digital Climbing Holds, reach out here.

“All that we want is for you to help them help themselves,” concluded Boileau-Nigoul. “The world is discovering Ukraine and their people. We are lucky to already know them. They are already so determined to rebuild. I am so proud, and privileged, to have our production there.”

Industry Partnerships in the COVID Era: Preserving the Best of Climbing...