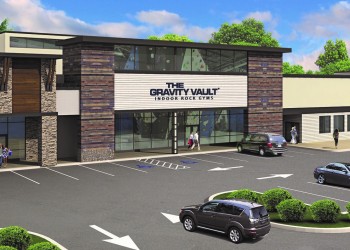 Gravity Vault will open in the site of a former nightclub on the New Jersey shore sometime in 2019, according to the Gravity Vault website. The new facility will mark GV’s tenth climbing gym in and around the Pennsylvania/New York region.

Brick Plaza, which housed the former nightclub has 422,000 square feet of retail space, has lost big chains in recent years, including a major grocery store that was a longtime anchor at the shopping center. Earlier this year HomeGoods and Michael’s opened, sharing the location. LA Fitness will also be moving into the Plaza as part of a $23 million plan for signifacant upgrades. Sports Authority closed in 2016, according to Patch.com

This week, the area township said site work is continuing within the space as the ceiling heights had to be increased to accommodate the new use.