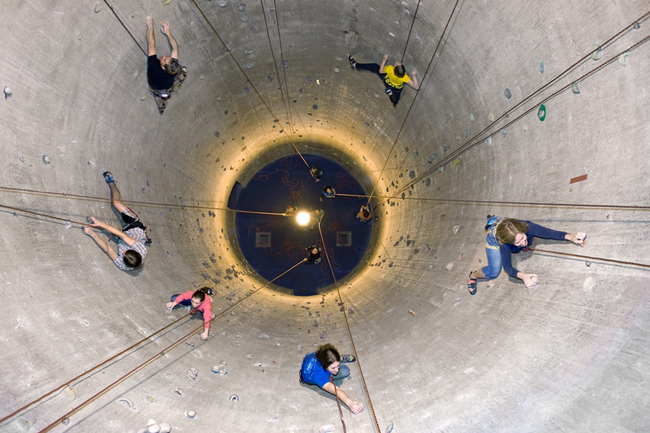 The story of Upper Limits climbing gym, on the precipice of opening its fourth location in the midwest later this fall, began back in 1989 when some Army buddies convinced Chris Schmick, co-owner, to go rappelling — even though he wasn’t feeling great after a long night of drinking. “We had our Army boots on … we were the typical idiots,” he recalls. They ran into “some weird looking dudes in tights and all of this shiny gear,” and Schmick discovered climbing. “I fell in love with it that day,” he says.

His story may sound familiar: he went to the outdoor store, bought some “how to rock climb” books and started climbing every weekend. Schmick eventually dropped out of college in Arizona because there was too much good climbing around to go to class. Nevertheless, his path to climbing bum stalled when a bad fall in Red Rocks grounded him.

During his recovery, he worked as a welder and met his soon-to-be wife, Pam, a veterinary technician who gave his cocker spaniel a haircut. In 1994, shortly after they married, their local climbing gym in Peru, Illinois, was put up for sale and they seized the opportunity.

From the start, “we knew we needed a bigger space and a better location,” says Schmick of the original gym which was located in a converted racquetball court. So they began the search in nearby Bloomington, IL. “We looked and looked…and looked. Since it’s a flat state, it’s easier to sprawl out than go up.”

The Schmick’s were nearly ready to give up on the area when they found some abandoned grain silos, including a 110-foot grain elevator. After securing a bank loan, adding in their life savings and another loan from Chris’ grandmother, the Schmick’s became the proud owners of the silos. Then, the hard work began: three months of cleaning rotted soybeans and scrap metal from the grain storage facility that had been vacant for more than 10 years. Schmick then spent three months building climbing walls and drilling thousands of holes into the concrete silos so that climbing holds could be attached.

“As a climber, I thought: ‘This is awesome.’ As a business owner now … it freaks me out,” Schmick admits.

Named one of the “Seven of the Most Innovative Gyms in the World” by Smithsonian in January 2016, Upper Limits – Bloomington offers a 110-foot outdoor wall with top-rope and lead routes and a 1,700-square-foot outdoor bouldering area, both lit at night for climbing. Customers can also take an elevator ride to the top of the building and rappel 120-feet off the top. Of the five grain silos, three are round and two are uniquely shaped, featuring stem and chimney type climbs. The main area includes slab, aretes, roofs, dihedrals, cracks, and a wave wall.

The gym got its first claim to fame in December 1995 when Schmick – jonesing for some ice climbing – rigged a sprinkler system to create a frozen waterfall on the outside of one of the silos. A local climber and journalist caught wind of the experiment and wrote a story for her newspaper. The story went viral (the old-fashioned way) and Upper Limits made it into the Chicago Tribune, Paul Harvey, The National Examiner, Good Morning America, and other national news outlets.

Despite the attention, Schmick hasn’t re-created that frozen waterfall.

In 2001, Schmick and his wife began the search for a location in downtown St. Louis, Missouri in part because the city was located closer to Jackson Falls, the crag in southern-Illinois Schmick was helping to develop. Their new location was a departure from the silos, with 34-foot ceilings and 10,000 square feet of climbing surface built by Eldorado Wall Co.

Once St. Louisans had a taste of the climbing spirit, they wanted more. In 2010, the Schmick’s once again began their search for a new location and found it in an industrial warehouse in West County, about 15 miles west of their St. Louis location. The building had just one problem: a 20-foot ceiling. Undaunted, they raised the roof to 45 feet and, this time, contracted with Rockwerx to build 14,000 square feet of climbing. Nearly 1,000 people walked through the doors of the new location on its opening day in 2011.

In September 2015, Upper Limits invested in a $60,000 upgrade to the West County location by adding a training room called “The Boardroom”, which is open 6 am to midnight. Though it has 40-50 members (who pay an additional fee for access), it hasn’t done as well as Schmick expected. “There’s not a ton of hard climbers here,” he says of the slow growth.

“But, it’s not a disappointment [because] we really built it for the climbing team. We needed to create a space for them, with the added bonus of having this place for hardcore climbers,” Schmick adds.

That doesn’t mean there is a shortage of people wanting to climb, they just look a bit different than the dudes Schmick started climbing with in the late eighties. For instance, the only women you used to see in the gym were the girlfriends of climbers, Schmick says; now it’s almost a 50-50 split.

Schmick says his primary goal is to create a safe environment for people, of all ages, to have fun rock climbing. “I try to get kids, adults …because you never know who’s going to like it,” he says. “We’ve had people who are 50, 60 years old who try it for the first time and fall in love with it. We also have members who are 89 years old. It’s a lifetime sport; it’s not football.”

Kids in the Burbs

Upper Limits newest location in Chesterfield, a suburban community just outside of St. Louis, is scheduled to open September 2016. “It might be the last good location” in St. Louis, Schmick muses. (Downtown St. Louis is also home to the Climb So iLL gym.) “I also said I wouldn’t build another gym after West County — so who knows?” he adds.

The impetus for the Chesterfield gym was a dad on the kids’ climbing team, who suggested, and even scouted the location.

“We weren’t super aggressive about it. It was an opportunity that was too good to turn down. Everything lined up perfectly — except the ceiling wasn’t 40 feet tall,” Schmick says.

The $1.1 million gym sports 24-foot ceilings and will include 7,000 square feet of bouldering, 1,500 square feet of top-rope, and a large “kid-zone.” This time, Walltopia is erecting the walls. “It’s the best price right now,” Schmick explains of their decision.

Located next to a trampoline park, a cheerleading gym, and a karate place, it should do well with the 30-and-under crowd and families with kids, he says.

Targeting the youth market is no accident. The secret sauce for a successful climbing gym is age (kids and young adults) and income level, says Schmick. “I learned a long time ago that climbers don’t pay the bills. Birthday parties and Boy Scouts do.”

Keeping up with the Joneses

Even though the Schmick’s have been busy with the new Chesterfield location and The Boardroom expansion, they have continued to improve their practices and infrastructure at all of their locations.

Over the past year Upper Limits has upgraded from shredded tire rubber to foam padding for its floors at their downtown and Bloomington locations, and has switched from drag pads to a seamless flooring system in their West County bouldering area.

“It was an expensive year for us!” Schmick says. Upper Limits also began providing its own lead ropes to climbers – an idea that occurred to the Schmick’s after climbing at another gym.

“You do things for years and you don’t think about them,” Schmick says. “It’s just another thing that can go wrong; this way, we inspect them and we know they’re safe.” It probably costs them about $5,000 a year, he acknowledges; both in purchasing the ropes and not selling as many ropes at the pro shops.

“We do everything we possibly can to keep people safe, but it really comes down to people double-checking,” he says. “It comes down to human error and that’s one thing you can’t get rid of.”

Creating a community in a corn field

“If you look at St. Louis now, 15 years later, we’ve probably created thousands and thousands of rock climbers,” Schmick says. “It’s neat seeing kids who learned how to climb in Bloomington – in the middle of a corn field – that are now adults, have kids of their own, and are still rock climbing as a family.”

The Schmick’s also enjoy running into past and present members of the Upper Limits community all over the world. Once, in Maple Canyon, UT, they ran into a climber sporting an Upper Limits competition t-shirt from 15 years earlier.

“It’s cool to have members and friends from all these years, spread out throughout the United States, that got their start at Upper Limits,” says Schmick. “I’ve changed their world and they’ve changed mine.”

CBJ Gym Map Is Back (And You Can Win Free Holds)