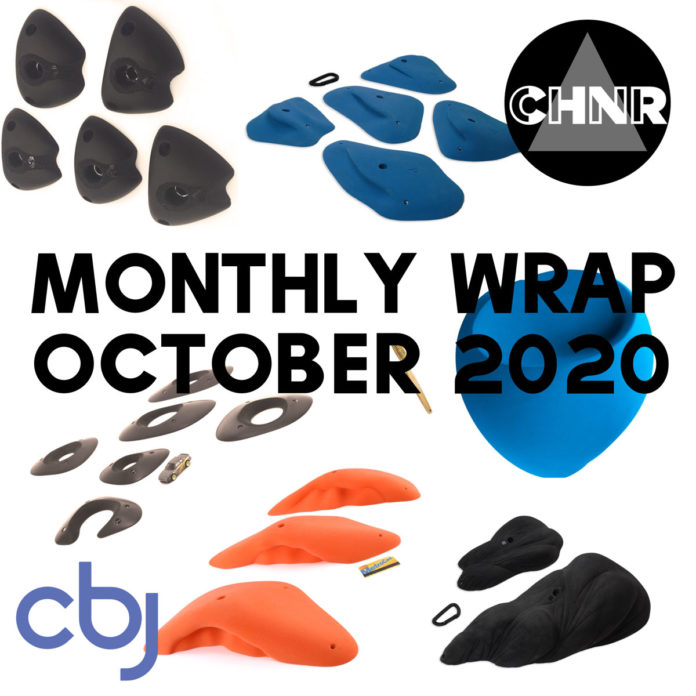 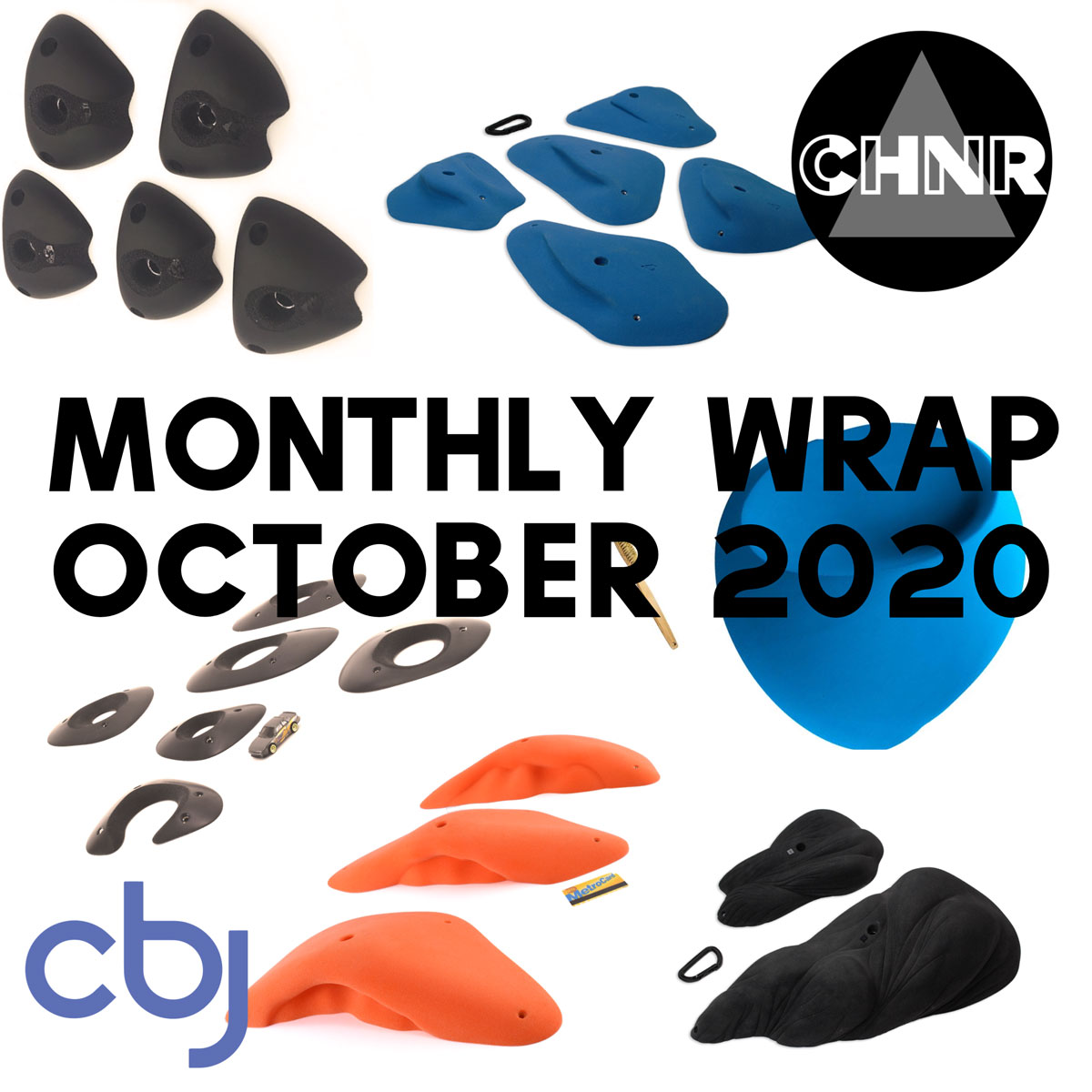 Welcome to the October Grips Wrap in cooperation with Climbing Hold News Reviews, where we bring you the latest in climbing holds, macros and volumes each month. October saw more climbing holds being released all over the world as climbing gyms continue to navigate the pandemic period. New holds always bring a smile to everyone’s face so let’s get on with it. We hope you love this as much as we do!

Elevation Climbing is owned by Mark Bradley / Ryan Wurm and consists of a powerhouse of established shapers, such as Ty Foose, Joey Jansen and the owners Bradley and Wurm. Elevation has released a slew of modern macros: the high profile horns (the Beta Splitters shown in melon orange, left); big huecos (the Motivators in purple); large sloping edges (Le Gastons in mint); and the Hive system (in melon, right), which are a series of blockable symmetrical mirrored surfaces for which the combination is seemingly limited only by a routesetter’s imagination. In total, these initial releases comprise 49 new shapes. A website is under construction and ordering is currently available through an order form and email. Elevation Climbing is being produced through Tack Composites, with orders being taken now. 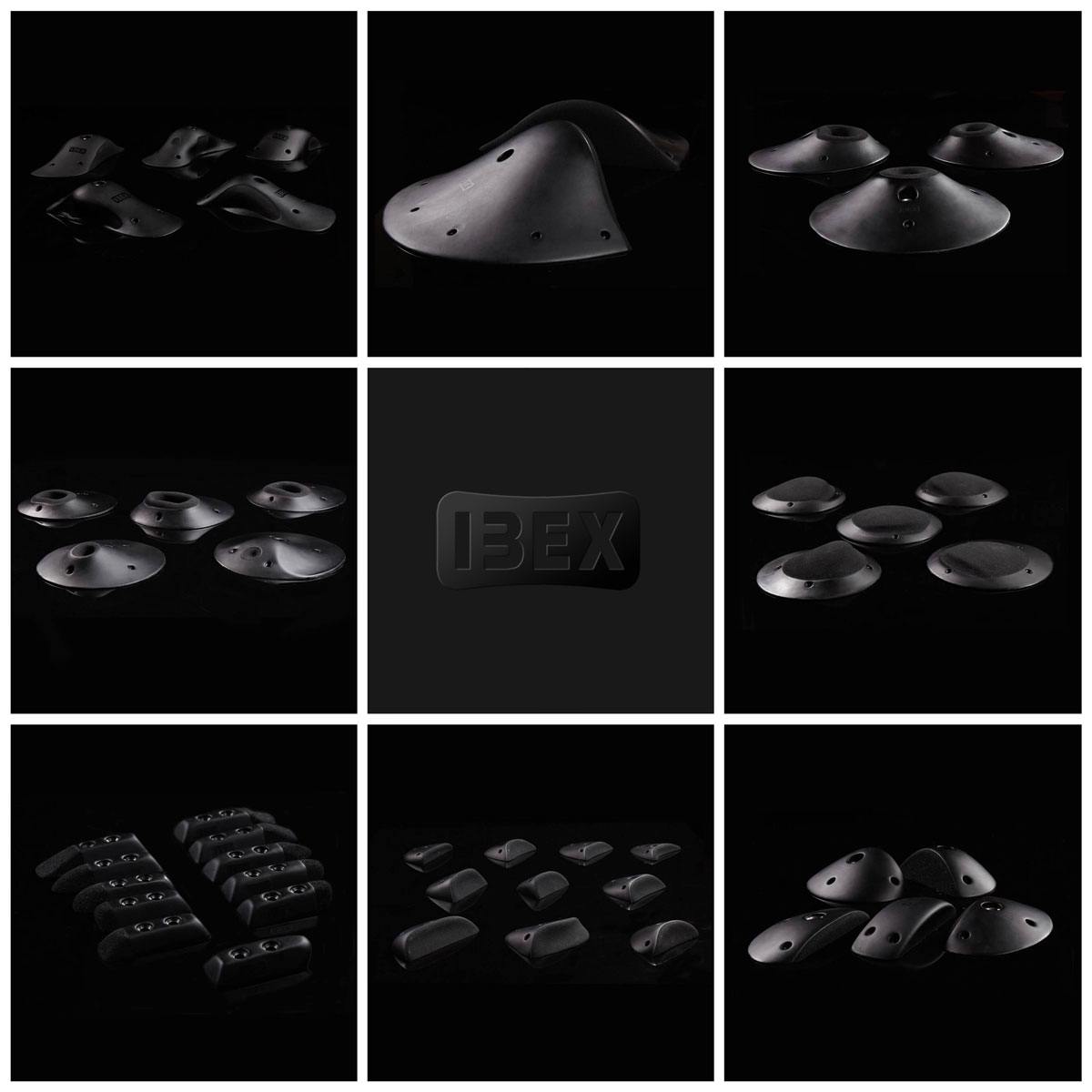 Ibex Climbing Holds has released a huge expansion to the Nisyros line, poured by Composite-X. The new shapes are an extension of the smooth matte dual texture line, which now includes pockets, blockers, plates and expanded pinches, edges and crimps, as well as screw-on jibs. They are available now and are distributed through Compass Climbing owned by Mark Bradley, who is the distributor for Ibex and Thrill Seeker Holds in the United States and Canada. 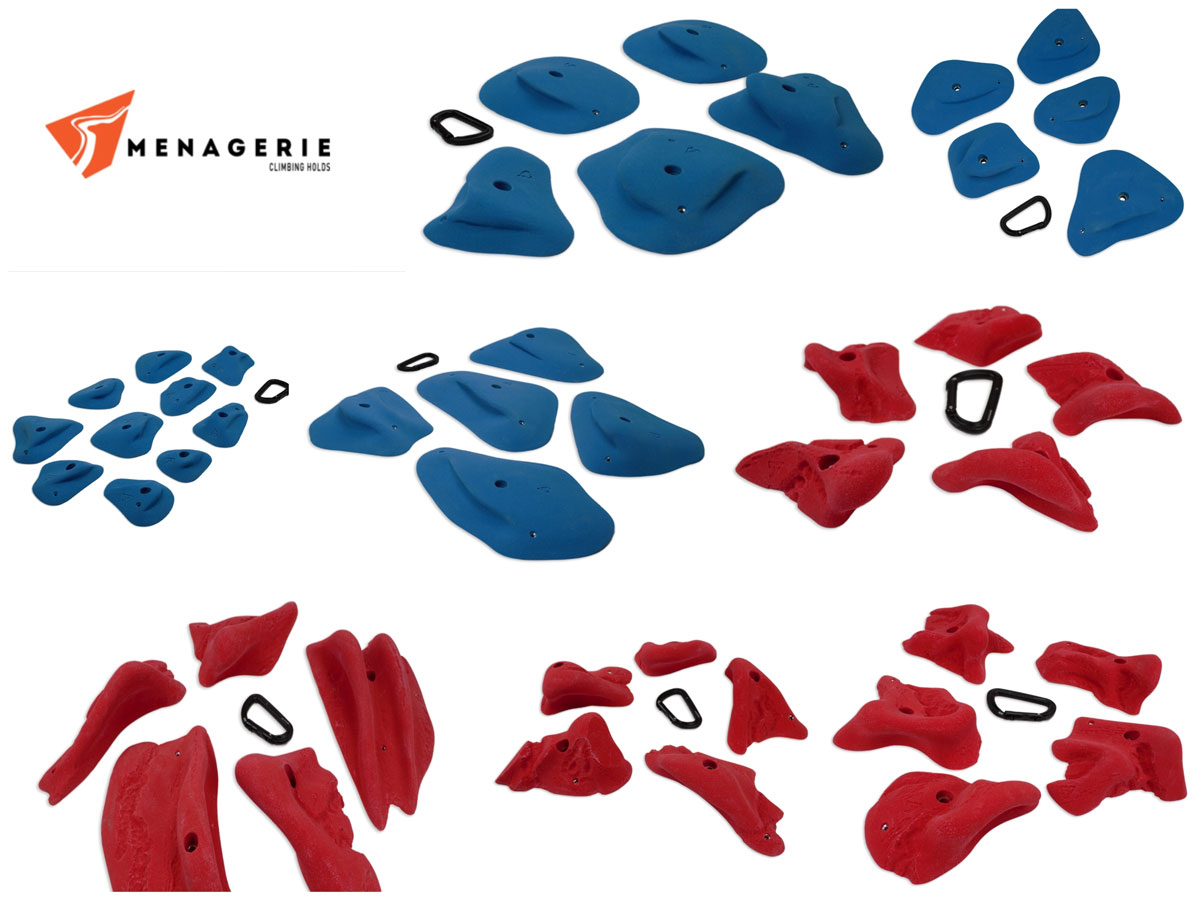 Menagerie Climbing continues its trend of debuting a ton of new lines, all shaped by owner Andy Raether. This month sees the beginning release of the Scoured Limestone Jugs (shown in red), which comprises a 30-hold addition to the existing 40-hold Scoured Limestone Edges with the Small-Large sizes (as well as footholds) being released. October also saw the release of the new Bulwark Edges (shown in blue), a series of 50 holds featuring thin low-profile tapered technical crimps. Menagerie Climbing is poured by Proxy / Vertical Solutions. 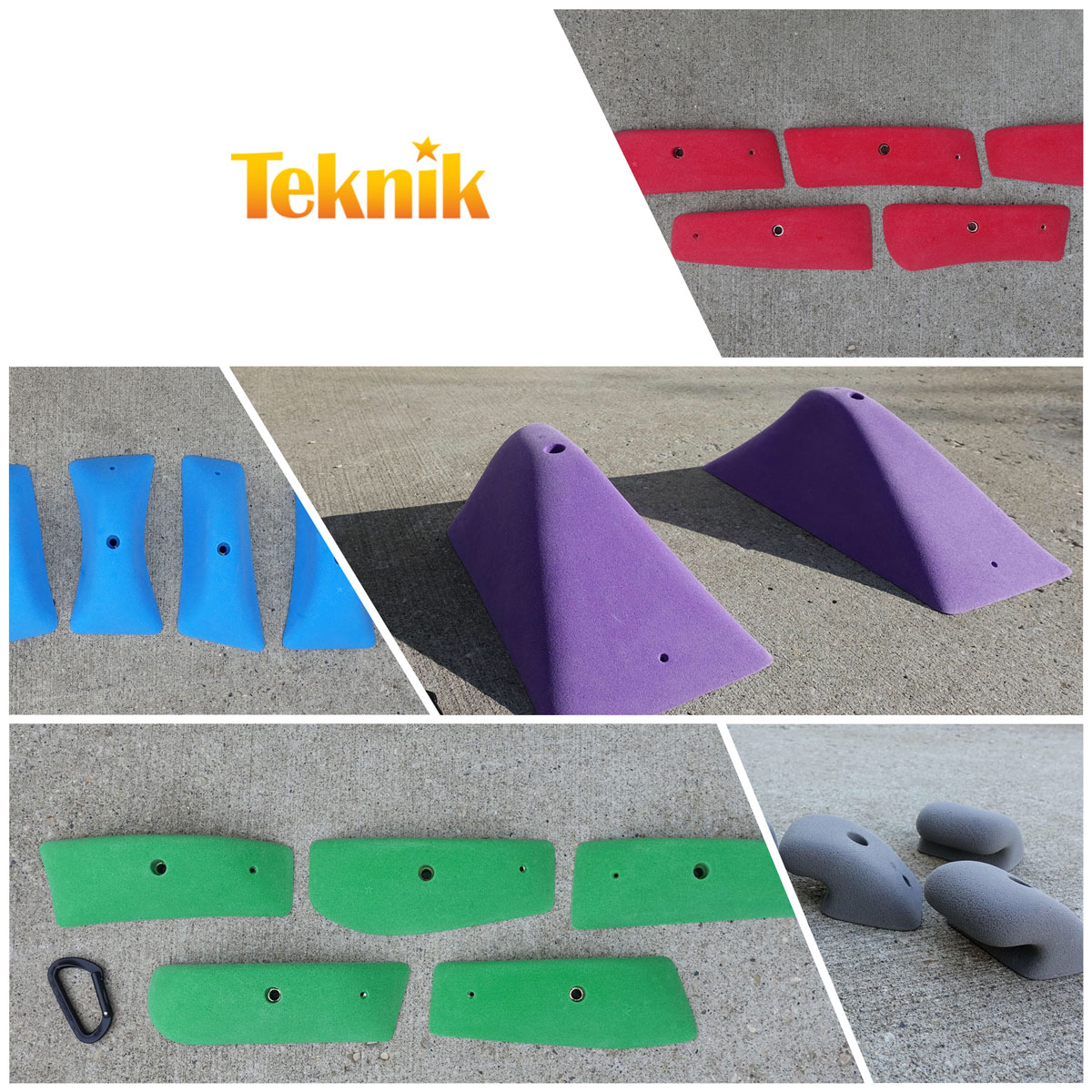 Teknik Handholds has been quiet lately, but this month it released the Grand Scarabs (shown in red), which are long and gently incut edges―similar in appearance and feel to the classic Scarabs―as well as the slightly taller and more positive Grand High Scarabs (shown in green). The company also released the Twin Fangs (shown in purple), which are large tapered pinches, as well as the Trim Pinches (in blue) less wide in nature. Teknik also added its offering to the widely existing but important array of down climbing jugs, which are symmetrical large grips to help you celebrate the top of (or bail off) your project. They are available in a 6-pack or 24-pack. Teknik Handholds is based out of Canada and poured at Aragon Elastomers.

Kilter Grips has been working to expand Brushed Sandstone, Granite, and Complex styles. From Composite-X, Kilter has new Noah 2XL Fins (green, middle left in pic), which are big comfortable matchable jugs that swoop out of the wall, a 5-pack of Sandstone L4 Mixed Edges (top middle in blue), and Winter Complex XL1 and XL2 (purple), which are edges and slopers with the option to use together or separately. All of the Winter Complex can be bolted on or screwed on to setter preference. From Aragon, Kilter has some new Granite Kaiju―a big ghost ball sloper and a pinchy slopey tufa―in the same fine Granite texture as the Granite Complex (blue, upper middle). New Granite Complex sets include Kaiju incut fins and ledges and 2XL, XL, and L slopers and incuts (blue, throughout picture). There are some new Brushed Sandstone Complex as well, with 2 new sets of XL puffy incut fins that work well with the new Brushed Sandstone Kaiju, 2XL, and XL slopers, ribs, and incuts (lime green, throughout picture).

Haptic and Union are sub-lines of Kilter with shapes from pro setters and pro climbers, and Junction holds are holds that share styles so setters can transition between those styles on the wall. New offerings from Haptic include two junction sets―Jimmy Webb’s new Southern Sandstone Kaiju Brushed Slots and Pro Setter Jeremy Ho’s Brushed Sandstone XL Lo Riders. Webb’s Southern Slopers Kaiju Brushed Slots (green, upper left) are unique lifted puffy slots with a distinctive jwebxl feel that work well with both his Southern Slopers line and the larger Kilter Sandstone line. Ho’s Sandstone Lo Riders (lime green, top right) do the same, combining a comfortable Brushed Sandstone texture with the popular Lo Rider aesthetic. Ho also has 4 new sets of Ho Dunes, which stick up more than the Lo Riders but still feature a nice taper and sweet spots you have to find on the wavy raised pinches and wavy wrapped incuts (orange, throughout picture).

Finally, we have the Roda (black). Roda, meaning wheel in Brazilian, is the newest style from the newest shaper in the Kilter family, Earthtreks Englewood Head Setter Aroldo Silva. Silva brings a strong artistic perspective to his work, and he wanted his first shapes to both function well and look good on the walls. His efforts have yielded the simple, elegant Roda jibs―dual-tex outside, brushed inside, for specific intentional setting. 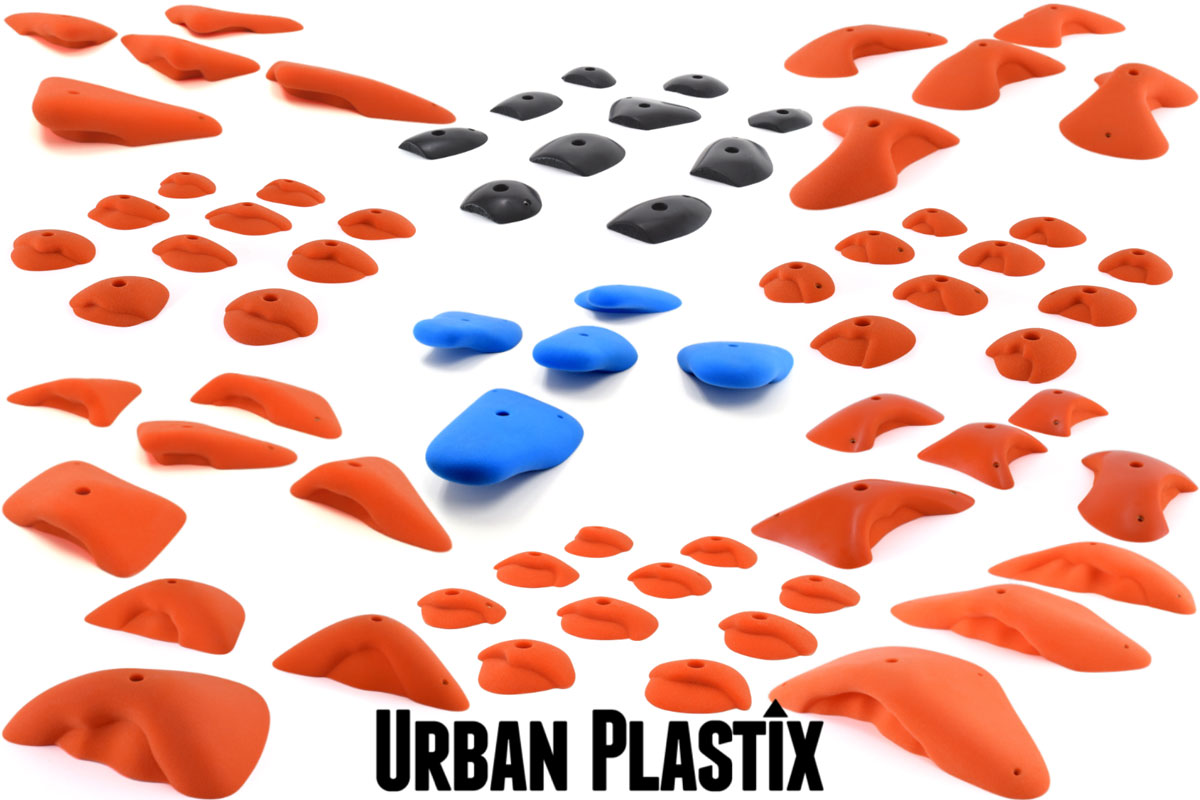 Peter Juhl of Urban Plastix has been focusing on expanding some of his popular lines, including setter-favorite Stealth, always useful Regs, and the new Stratos. Stealth―UP’s popular dual-tex―gets a new XS set of 10 small crimps/techy feet (black), with a long dual-tex taper and a wrapped lip where the dual-tex meets the texture so the climber has to work a little harder to use them well. In the Regs family, which are comfortable “regular” holds, the 5 Regs XL 3 Jugs (blue) are big puffy matchable fins that work well on every angle and direction. Finally, Juhl added a bunch of new Stratos (orange), including incuts, slopers, pinches and crimps in several sizes. Stratos feature puffy wrinkle features you have to figure out how to grab. Juhl also introduced the junction set of Dual-Tex Stratos (orange, middle right), so you can transition from Stratos to Stealth and back. 68 new shapes altogether. 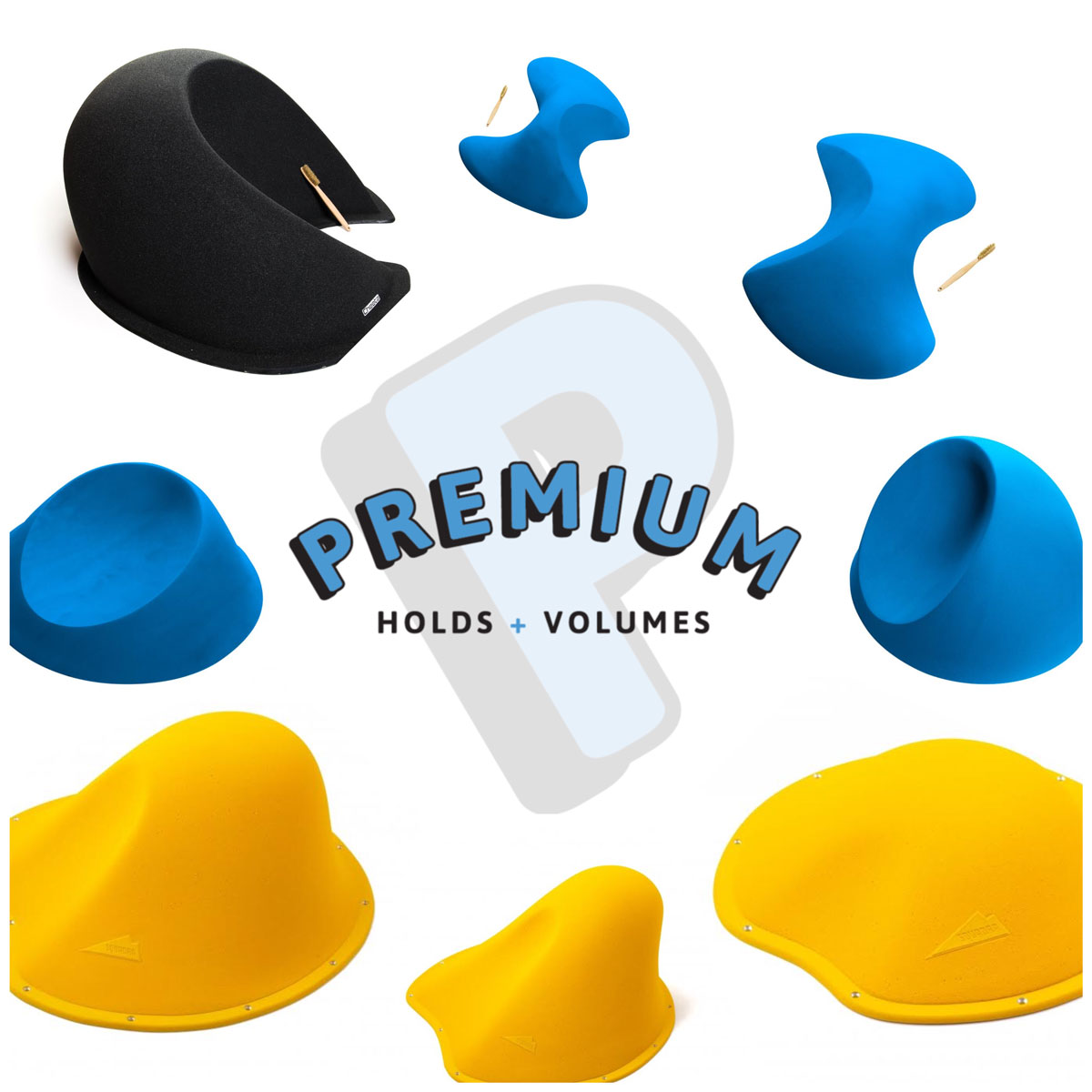 While technically not newly-released holds, Premium Holds is distributing new holds from Cheeta and Squadra this month that have previously not been available in the US, so we’ll count it. Premium Holds has brought in the new fiberglass volumes for the redesigned Taji and Taji Pinches from Cheeta (shown in black and blue) and the expansion to the Fichtl series from Squadra. 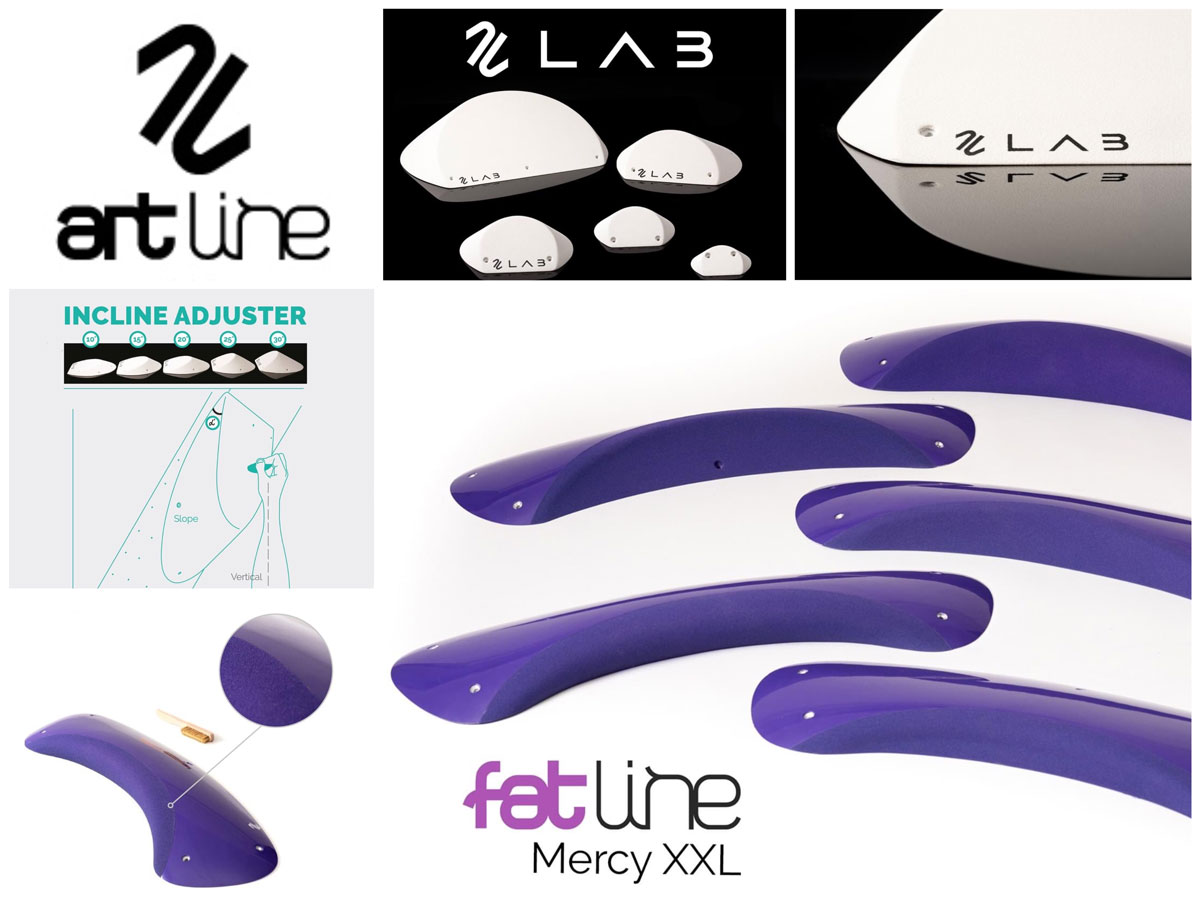 Artline Holds is a French climbing hold company which was created in 2011. Now, Artline is back with its assembly of shapers called the ArtLab and are starting to gain more attention throughout the world. The company recently released its Mercy XXL dual texture set as part of the Fatline series (shown in purple), as well as the Slopes (shown in white), which are innovative new incline adjustable macros that can change the angle (in a specific fashion) of any wall or holds. Artline Holds is distributed by Blocz Distribution in the United States. 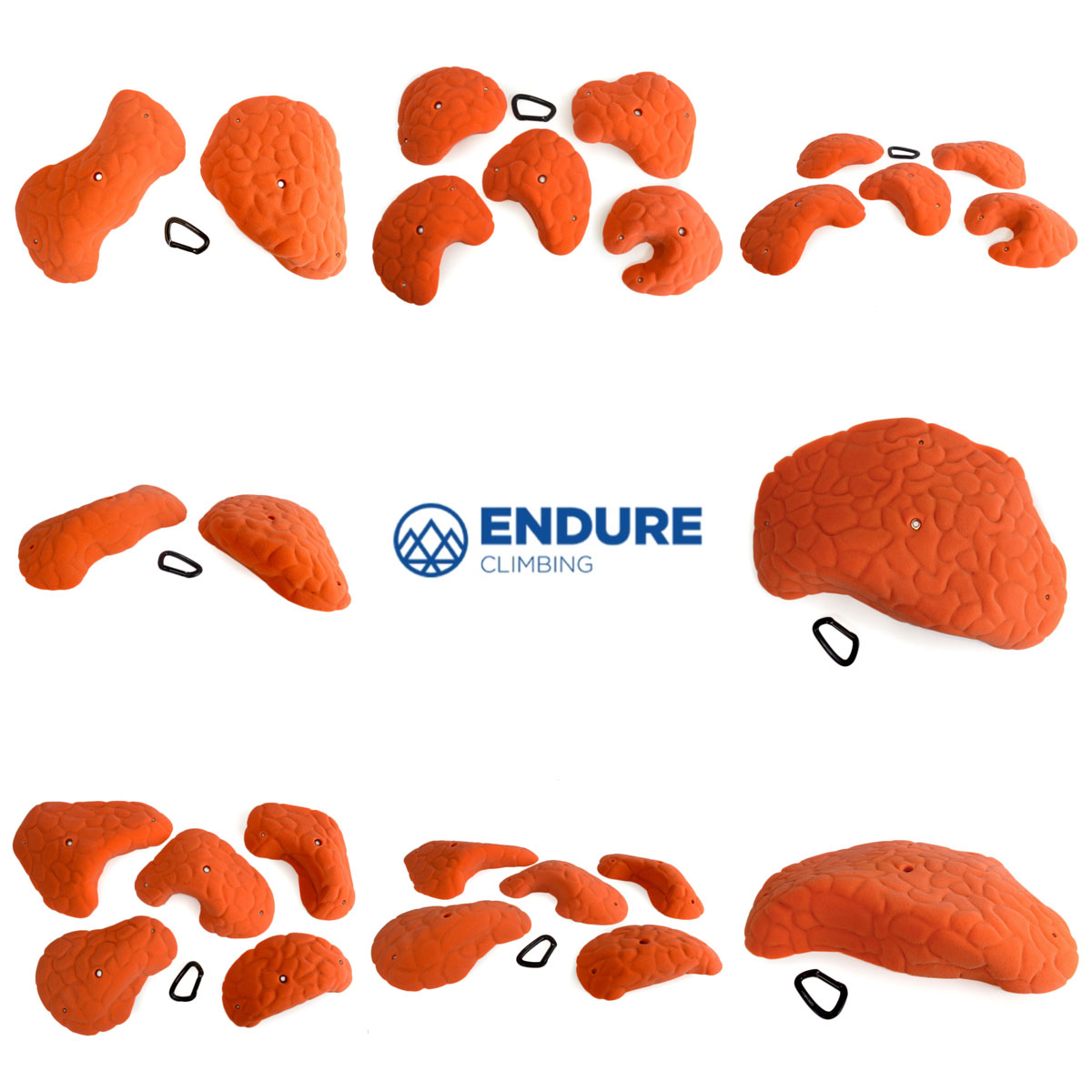 Endure Climbing is a small batch hold company based out of Richmond, Virginia, which has just released an expansion to its font-like Furrows Series. The expansion includes very large shapes, from 2XL through 3XL, as well as a feature sized hold. They are shaped by freelance shaper Kegan Minock. The Furrows now represent the most complete set that Endure Climbing has released to date. 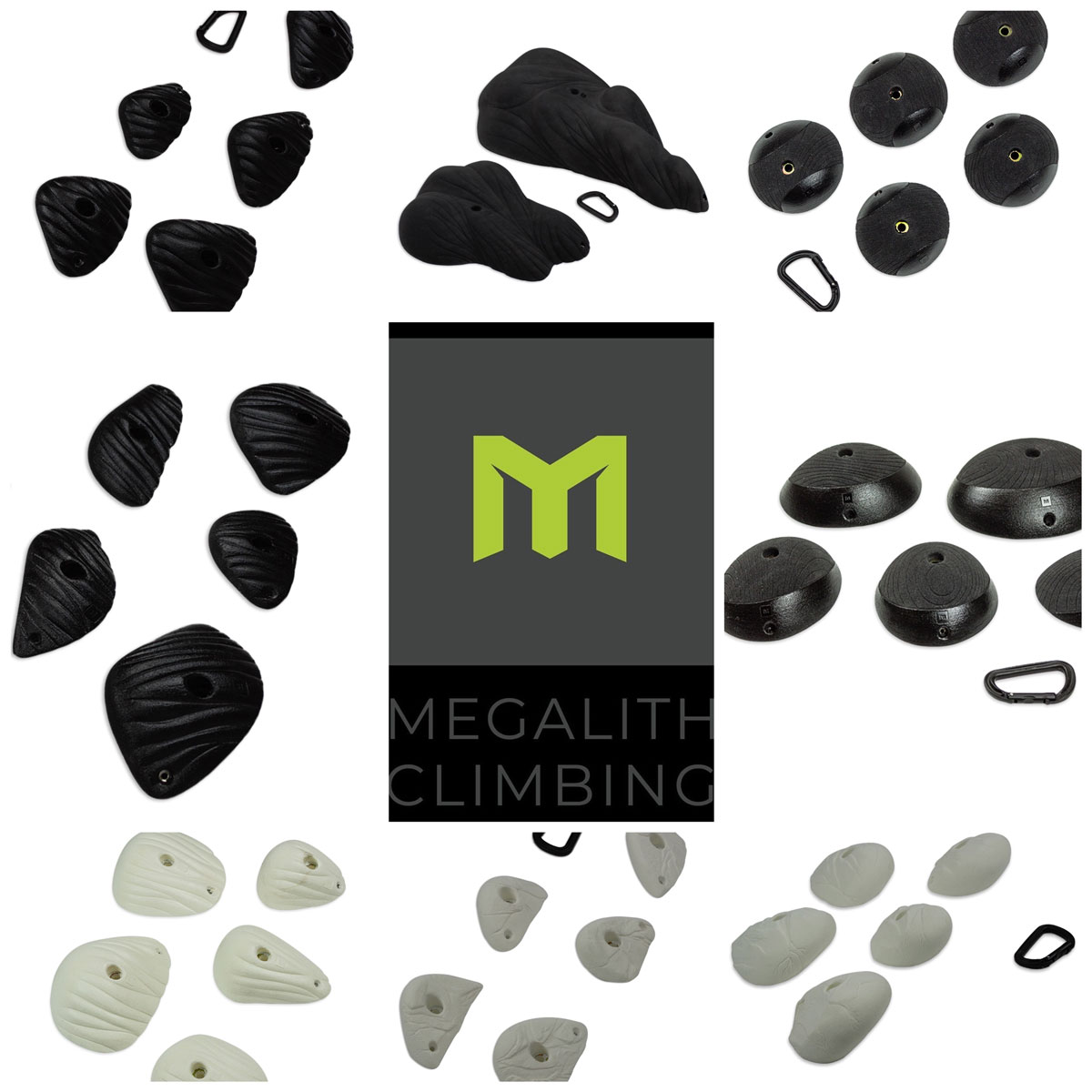 Megalith Climbing is a newer hold company based out of Salt Lake City, Utah. Megalith is releasing expansions to its existing series, with larger shapes starting to show up as well. Per the company’s website, the Flow series (shown in black, top left three images and white in middle bottom) utilizes a subtle dual texture to approximate wet, rivulet-worn limestone. The Exo series (shown in black, top right images) features dual textures with shapes that draw inspiration from living creatures, and the Hewn series (shown in white left and right bottom) features weathered limestone details. 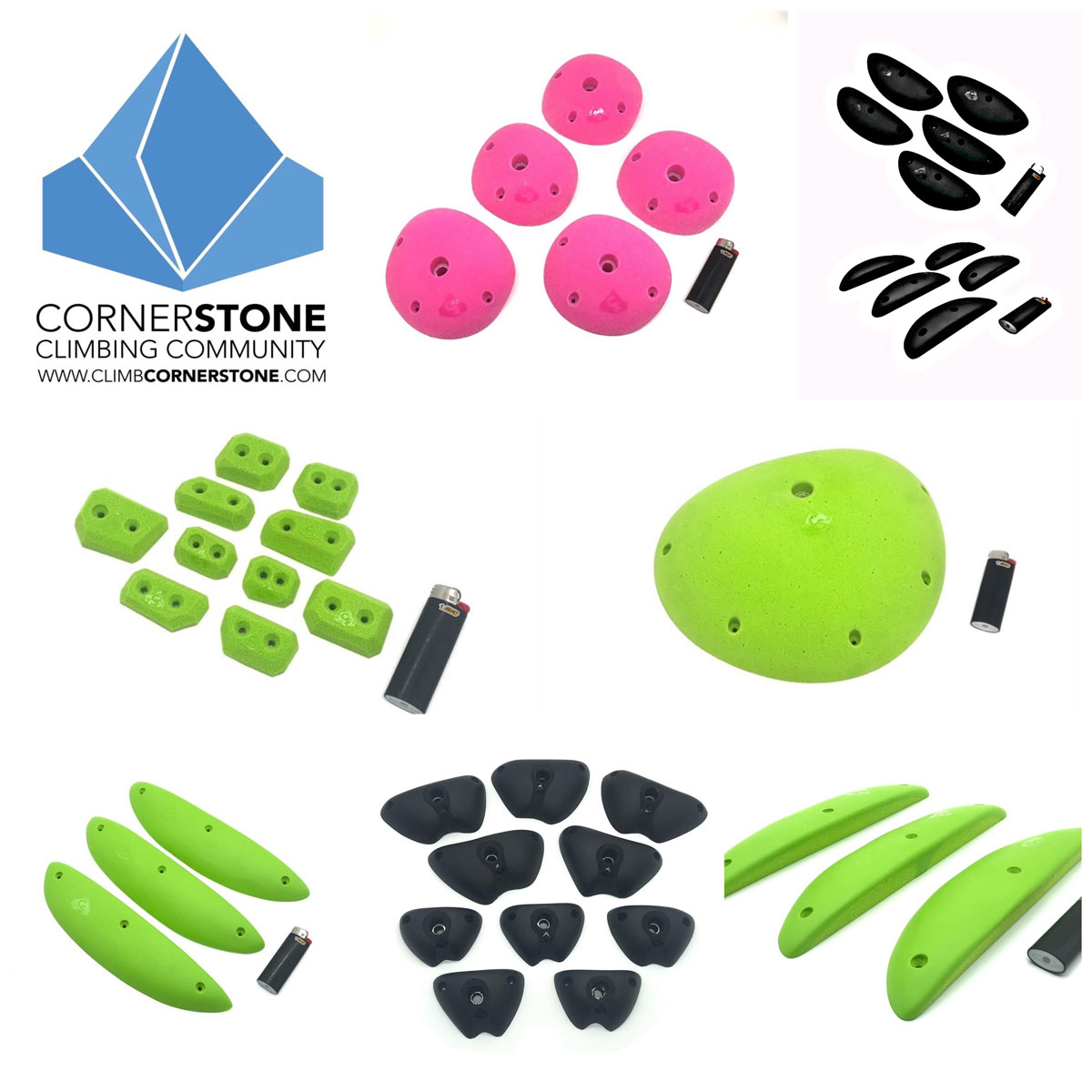 Check out climbingholdnewsreviews.com for even more updates and new releases on a weekly basis. Thanks for joining us! We’ll see you next month!