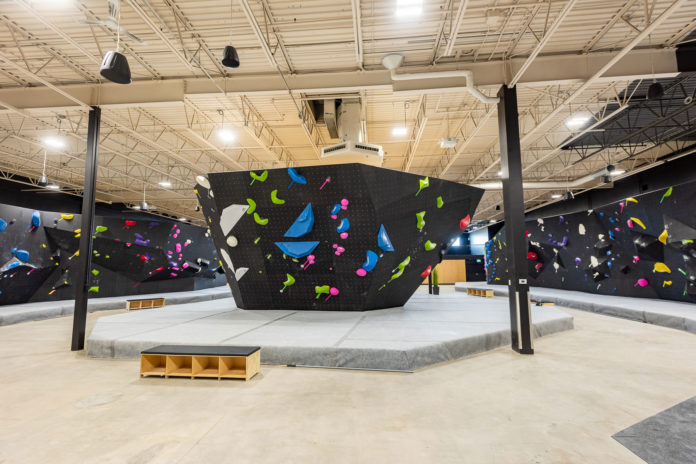 DÉLIRE, a climbing wall manufacturer and gym operator out of Quebec, is known for its sustainability practices and devoted focus on community. But at the center of everything they stand for is the core belief that innovation grows from the ability to think outside the norm. Over the years, this core belief has led DÉLIRE to embark on a number of different projects and initiatives that uniquely benefit the climbing community, both locally and far from home.

DÉLIRE Parc was an answer to some of the many problems created by the pandemic. During late 2020, with the pandemic still in full swing, DÉLIRE was looking for a way to give the community what it wanted—a safe, fun place to climb and train. The solution was an outdoor climbing park in the heart of Quebec, an idea that Jeff Beaulieu, co-owner and co-operator of DÉLIRE, had been loosely thinking about for years. In April of 2021, they signed a lease, which instantly put them on a 3-month deadline to deliver the park to the community for the warmer months.

“We had no choice but to quickly and efficiently make decisions in the design process,” says Gabriel D’amour, the Operations Director for DÉLIRE Gyms. “It was kind of like climbing a big wall; time is not on your side and resources are scarce. If you don’t make decisions quickly in a pinch, you don’t make it to the top.”

With production and supply chains being a mess, DÉLIRE was instantly forced to find unique solutions to the problems at hand. Instead of traditional anchoring setups, they used shipping containers to support the walls, which also doubled as useful storage containers. Next, they put the mats on plastic skids, which lowered costs and installation time, and allowed the mats to stay dry. Quick decision-making and creative thinking were applied at every step.

The innovative design and execution worked in their favor. DÉLIRE Parc, featuring 170 linear feet of climbing and 50 boulder problems―reportedly the largest project of its kind in Canada―was delivered on time in the middle of the pandemic. It was met with resounding approval from the community. “If we had to do it again, there’s no doubt in my mind we’d find things to improve,” says D’amour. “But seeing the project in its final form, after lots of feedback from our community, I really feel nothing was overlooked with the Parc.”

Indoor climbing is often the best tool to train for climbing outside. When a gym owner approached DÉLIRE with the goal of providing a crack climbing wall in the middle of downtown Montreal, Beaulieu and the team jumped at the opportunity. “The owners of the gym liked this style quite a lot but thought it was difficult to really train for a climbing trip like that versus bouldering or sport.”

There’s a good reason for the difficulty in training. Cracks are a thing of beauty, each one unique in its path, width and angles, and climbing them requires specific technique and training practices. Those practices aren’t easily or often replicated on indoor bouldering and lead walls, and most of the tools that do exist for crack climbing are static―AKA non-adjustable―making them a far cry from the real thing. Without that functionality, “You couldn’t adjust how large the crack would be and get ready for a more specific climbing destination,” Beaulieu says. “So we brainstormed, and came to the point of, what if we add another vertical movement in the wall that’s already working with a hydraulic system anyways?’’

And thus, DÉLIRE’s adjustable crack wall was born. The concept to reality allowed for beginner climbers to learn and train crack techniques without having to trek out to remote destinations, and provided a useful tool for experienced climbers to train for a specific crack project. “In this project, it [was that] passion and out of the box type of innovation that expressed itself,” says Patricia Morin, Marketing and Sales Coordinator. “We wanted to create the perfect training set up in an unusual destination.”

Like the adjustable crack wall, the team at DÉLIRE saw a distinct problem when it came to ice climbing: the potential in Canada was large, but so was the barrier to entry. “[Ice climbing] is usually more difficult to access. You need to do the long walk in winter to get to the climbing spots, and set up everything in a cold and wet environment,” says Beaulieu. “[It is] not necessarily something that is accessible to a lot of climbers.”

The solution to this problem, an idea that stemmed from a climbing enthusiast that the DÉLIRE team met at a conference, was to create a standalone, outdoor climbing tower in a local forest that doubled as an ice climbing tower in the winter. “Having this set up could allow the team to have much more people trying, more accessibility,” says Beaulieu. “[Climbers] can climb a short session and get back in front of the fire place and warm up. The long-term vision would also be to offer more complete ice climbing expeditions to those who have been trained before.”

In this design, they decided on a multi-functional purpose for the structure, spanning all seasons. The tower would be set for regular gym-style rock climbing during the warmer months, but would convert to ice climbing in the winter months. Creating something with such dual functionality was certainly a design challenge. Deciding on the right angles, structure and durability to support huge volumes of ice, while also doubling as climbing terrain that would be functional, safe and fun for rock climbing in dry weather, was a unique set of problems. On top of this, they decided to install the wall in the middle of a local forest in a manner that imposed the least amount of impact and damage to the natural environment.

Out of the box thinking made the dream a reality, and the space has now been operational for over two years.

Like climbing holds, volumes are essential tools for setters to freshen up the experience of indoor climbing. However, volumes are expensive, and when they endure too much wear and tear, they are often quickly discarded in favor of new volumes. In line with their focus on sustainability, DÉLIRE designed a volume refurbishing solution to answer the needs of gyms and setters, while cutting down on waste.

The idea is simple: When a gym has old volumes that it has decided to retire, they can choose to have DÉLIRE give them a makeover. No matter who makes the volumes, DÉLIRE will come and pick up the volumes, fix any structural integrity issues, reapply new texture, and replace t-nuts where needed. When the job is done, they return the volumes—all for a fraction of the price it would cost to buy new volumes. “We won’t create a more sustainable industry if we still do things the same way all the time,” says Beaulieu. “So we get to the core of our process, see what we can make better, and move on from there.”

Often times, the easiest decision is not the best decision. Thinking outside of the box is never easy, or simple, but the benefits can be monumental. “I think we have a global view in our approach,” says Morin. “Don’t hesitate to do the extra miles to understand the reality of your customers. Listen to them. Get inspired by their passion. Throw all your old beliefs in the trash, and don’t hesitate to dream big and out of the box.”

DÉLIRE Climbing Walls designs and builds sustainable climbing walls and gyms of the highest quality and integrity and is the manufacturing arm of DÉLIRE Escalade, which operates multiple indoor climbing gyms and an outdoor bouldering gym in Quebec, Canada. 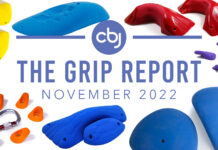 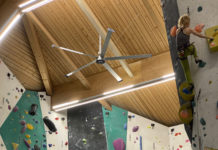