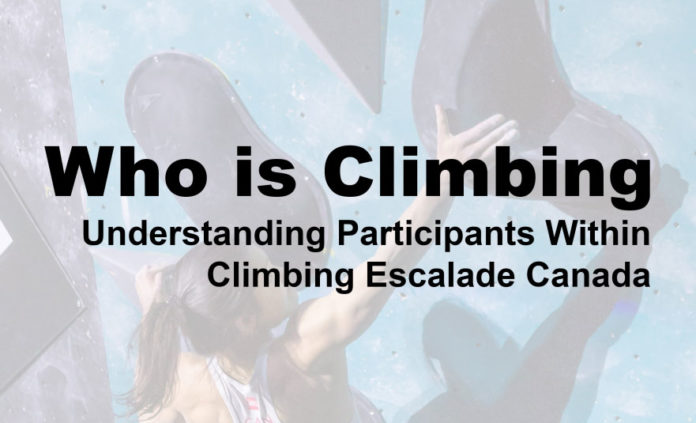 Climbing Escalade Canada (CEC), the national governing body for competition climbing in Canada, recently released the results of its demographic survey of climbers in Canada. The survey―which CEC noted was forthcoming in its 2020 annual report―had 1015 responses in total, 844 of which were deemed complete for analysis. According to the CEC, the survey was the biggest of its kind regarding climbing in Canada. The research was conducted by Daniel Wigfield, a University of Waterloo PhD Candidate, in partnership with CEC’s Diversity and Inclusion Committee.

In addition to covering demographic information, climber characteristics, and motivations for climbing, the report provided insights into constraints to participation in climbing as well as perceptions of equity, diversity and inclusion (EDI) in the climbing community. “The findings of this study will hopefully help climbing facilities and climbing organizations implement appropriate programs and activities to target barriers to participation,” reads the CEC’s announcement.

Constraints to Participation in Climbing

“As a trans climber, a lack of clear policy and statements of inclusion from sports organizations and competition organizers at ALL LEVELS makes me hesitant to compete. I do not know if I will be welcomed and supported by organizers, fellow competitors, and the wider community,” shared one respondent.

Noticeable differences were also seen across answers from respondents identifying as racialized and those of white respondents. Racialized people reported significantly more constraints, on average, and more often reported gym membership and access fees (45%) and fear of discrimination or exclusion (16%) as constraints than white people (30% and 6%). In fact, according to the CEC’s summary in the report, a climber’s gender and race/ethnicity appeared to influence the impact of all five major participation constraints: financial, health-related issues, access to training and skill development programs, fear of discrimination and exclusion, and perceived skill or ability.

Perceptions of EDI in the Climbing Community

As with participation constraints, differences also existed across the responses of racialized and white respondents regarding EDI perceptions. For every one of the aforementioned statements, racialized people reported more challenging experiences than white people. “It’s a very white male dominated sport. And in most climbing gyms, it feels inaccessible for BIPOC folks,” shared another respondent.

Finally, CEC’s report highlighted additional EDI perspectives in the climbing community that respondents had mentioned in the survey. It was common for climbers identifying as LGBTQ+, for example, to point out the impacts of the “often-dominated misogynistic culture within the sport.” The culture that comes with young, white males dominating the sport was a turn-off for respondents of all identifies, including older climbers. Respondents also shared that coverage of climbing in the media may be ineffective in portraying the diversity of Canada’s climbing community. And respondents who work in the industry noted the importance of not only focusing on enhancing diversity among participants but also in the workplace, by addressing factors like pay gaps and lack of advancement opportunities.

The full results of the CEC survey of climbers in Canada can be accessed here.