Last week the International Olympic Committee officially announced that climbing will be in the 2020 Tokyo Summer Olympics. This comes after two years of work on the part of the International Federation of Sport Climbing, which is the Worldwide governing body of competitive climbing.

In a press release from USA Climbing, CEO Kyan Waggoner said, “I cannot adequately express how important this is to the growth and development of the sport of competition climbing. We have been working towards this opportunity for many years, and now we will get to see climbing’s incredibly talented athletes compete on the stage where they have always belonged: the Olympic Games.”

The real news coming out of this announcement is the format that will be used for the Olympics. The IFSC proposed and the IOC accepted a combined format; one in which athletes will be required to compete in Sport, Bouldering and Speed climbing. This is in stark contrast to how all international World Cups are formatted which is by allowing a competitor to compete in a chosen discipline and to specialize in that discipline if they wish to.

Within international and national comps, there are no examples of a combined scoring or ranking system. So the IFSC will have to invent one — which they hope to do by the end of 2017.

There has been speculation that this combined format would even force changes at all national championships. Not so says Waggoner. “I’m telling you right now, that is not something that is going to happen in the united states,” he said in a phone interview with CBJ.

Another interesting aspect of the Olympics is how athletes will be chosen to compete. There will only be a total of 20 men and 20 women from all countries that will compete at the games. This selection is not based on nationality but instead on performance. It’s still unclear how the IFSC will facilitate the selection of an Olympic roster but there has been talk that the World Championships along with Continental Championships could act as an Olympic trials.

It’s important to remember that this format is only for the 2020 games. Climbing, in any form, is not a legacy sport in the Olympics and any future host country could elect not to hold a climbing competition. This means the event will need to prove its worth in 2020 if it wants to come back in 2024. “It may get picked up for future Olympics but we won’t know that till after the 2020 games,” Waggoner said. And if it does, the format could look very different.

Once the announcement went live the media sought out a few notable rock climbers, namely Alex Honnold, Chris Sharma and Adam Ondra to get their perspective on the announcement (Honnold and Sharma no longer compete internationaly and Ondra will be twenty-seven in 2020 and has shown no interest in going to the Olympics). These three were less than enthusiastic about the combined Olympic format, although they are still enthusiastic about competitions in general.

But others, like British climber Shauna Coxsey, who will also be twenty-seven in 2020, told the Guardian, “Anything that makes people live a healthier lifestyle is surely a good thing. This will make climbing even more popular and hopefully open it up to people who normally wouldn’t give it a go. The 23-year-old from Runcorn, Cheshire went on to say, “The sport has grown rapidly over the past decade, mostly with indoor climbing walls. I know there are some people who feel that crags may become overrun but I would like to see it become more accessible to everyone.”

Many older athletes are excited by the premise of climbing being in the Olympics but are less than thrilled about the format. Younger competitors, on the other hand, are likely more opent to the challenge of the combined format.

“I think the people that are going to be competing for this, they’re not the ones currently on the world cup circuit,” Waggoner said. “We’re talking about athletes that are currently as young as 12 years old and they haven’t specialized yet.” Climbers must be at least 16 years old to compete as an adult in IFSC events.

“So their response has already been, ‘Well then, I’m going to start training speed, I need to get better at speed.’ They know if they want a chance to go to the Olympics they need to be able to perform at speed,” Waggoner said.

Plans call for staging the skateboarding and climbing Olympic events in temporary venues installed in urban settings, marking a historic step in bringing the Games to young people and reflecting the trend of urbanisation of sport.

Also included in the 2020 games are baseball & softball, karate, skateboarding and surfing. The surfing competition will be held in the Pacific ocean off the coast of Japan.

IOC President Thomas Bach said, “We want to take sport to the youth. With the many options that young people have, we cannot expect any more that they will come automatically to us. We have to go to them. Tokyo 2020’s balanced proposal fulfils all of the goals of the Olympic Agenda 2020 recommendation that allowed it. Taken together, the five sports are an innovative combination of established and emerging, youth-focused events that are popular in Japan and will add to the legacy of the Tokyo Games.” 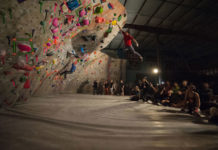 Climbing at The World Games Is Coming to Birmingham