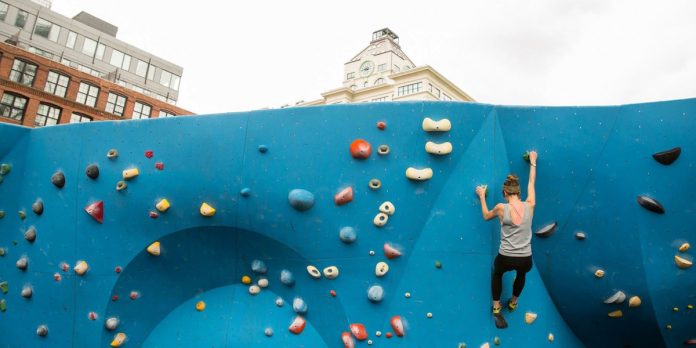 Behind the Desk… is an ongoing series that profiles people influencing and advancing the industry in gyms across the country. This month, CBJ heads to the Northeast to talk gym events, parties, barbecue… and whether it’s possible for a big city to have too many gyms. CBJ: NYC has not traditionally been known as a rock climbing hub, although that seems to be changing now. Being in the city, how’d you first find your way to climbing?

ERICSON: The climbing community in New York City has seen insane growth over the last few years. Within the two years that I’ve lived in New York I’ve seen three new gyms open, and there are currently 4 or 5 more in the works!

I was born and raised in an outdoorsy community in Northern California, so when I first crash-landed in Brooklyn to wrap-up my undergraduate career a few years ago the first thing that I sought out was the local climbing community. My first introduction to urban climbing was through a rad organization called The Adaptive Climbing Group—a climbing crew and competitive team for climbers with disabilities. I became a lead volunteer for ACG during my first week as a New Yorker, and molded into the community from there. CBJ: Have you noticed a big change in the NYC climbing scene in recent years?

ERICSON: Absolutely, climbing is a hot new commodity—especially in NYC. On one hand, it’s absolutely amazing to witness the masses of native-city-dwellers that walk through our doors and fall in love with climbing and the outdoor world every day. It’s beautiful to watch people realize the power, struggle, and pure emotion that climbing, and adventure sports in general, can bring. On the other hand, it’s slightly terrifying to see the massive and sudden growth of the climbing industry, and to see so many people who only associate climbing with pulling on plastic in a city gym. I learned how to climb in the Sierra Nevada’s, where the vast granite walls and the awe-inspiring views of Sequoia forests and crystal-clear lakes will take your breath away. The invincible feeling of being one with the mountains is what got me hooked on this wacky sport as a kid, so it’s strange to see people rejoicing in their first sends on bright orange plastic walls.

CBJ: A follow-up question: The Cliffs, Brooklyn Boulders, Central Rock, Chelsea Piers…do you ever worry that the city might get a little oversaturated with climbing?

ERICSON: Some days it definitely feels like it is, and there is a part of me that definitely fears for the sustainability of the urban climbing industry. For the most part, however, I love the growing outdoor community in NYC. Climbers are rad people and generally good humans, so I’m stoked to see more climbers go forth into this crazy world.

CBJ: Your job title might be interesting to other gym owners and managers—particularly those at gyms that don’t have an Events Coordinator. How is your job different from just “Manager?”

ERICSON: Essentially, I’m the party girl. I manage everything from staff holiday parties, to member appreciation nights, to large-scale comps (and more) across our 3+ locations in New York State. Like most other climbing gyms, however, The Cliffs is an ‘all-hands-on-deck’ work environment—so I also work the desk, supervise staff, decorate for the holidays, buy the beer, organize community outreach and fundraisers, and so on.

CBJ: What are some noteworthy events that you have put together?…anything particularly outside-the-box, in terms of standard gym events?

ERICSON: I’ve facilitated the Reel Rock 12 world premiere (which was over-the-top amazing), organized a couple different fundraisers for Hurricane Maria relief efforts in Puerto Rico, and hosted a few movie nights for our members (with beer and popcorn!). Within the next two weeks I’ll be organizing a showing of The Princess Bride (with donations going towards a fundraiser for The Discover Outdoors Foundation that two of my co-workers are organizing), an over-the-top holiday party for our 100+ staff members (complete with mechanical bull), and a MoonBoard competition. It’s an awesome job, to say the least. CBJ: To that point, a creative question: If you had an unlimited budget and access to anything/anywhere in the city, what climbing event would you put together?

ERICSON: Yikes, does it have to be in the city? If I had an unlimited budget, I’d use it to take our competitive youth teams and non-profit children’s groups and programs to The Gunks on a regular basis! I would love for these kids to have more opportunities to touch real rock, learn valuable outdoor climbing skills, and breath some good ol’ fresh air.

CBJ: NYC is a much bigger market than virtually anywhere else. Amid that, is it difficult to maintain that close sense of community that climbing is so well-known for?

ERICSON: New York City can definitely be overwhelming, but I believe that’s why the NYC climbing community continues to remain so strong and steadfast. Our mission at The Cliffs is to give New Yorkers a chance to leave the city behind—to meet fellow dirtbags, crag-lovers, and nature enthusiasts and (for a little while) forget about the fact that your train was delayed this morning, or that you got stuck in a mob of tourists on the sidewalk somewhere in Manhattan. Our goal is to foster, grow, and support the climbing community despite being stuck in the ultimate urban jungle, and I think we’re doing a pretty rad job!

CBJ: NYC is such a foodie town, so gotta ask: After finishing a hard session at The Cliffs, where’s the best place for a climber to refuel in the city?

ERICSON: The all-time favorite place for members to grub down after a solid session at our Long Island City location is John Brown’s Smokehouse—a low-key, old-school barbecue joint (with cheap beer) right next to the gym. As I eat a primarily vegan diet, I personally can’t vouch for the food at JB’s but everyone in The Cliffs community raves about it! 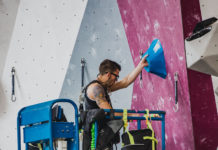 Growth Spurs Innovation: Behind the Desk with John Oungst 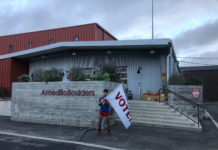 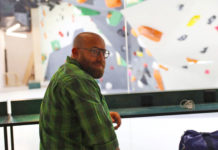 Bringing a Dream to Life in Israel: Behind the Desk with Yuval Hamburg