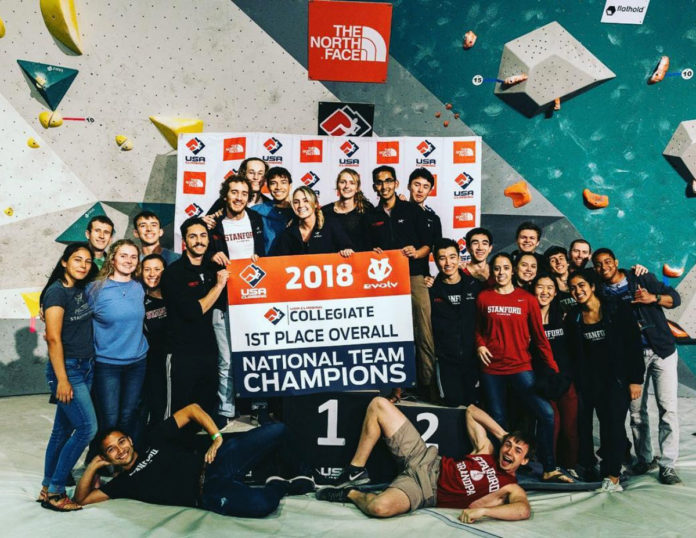 It is that time of year when students around the country say goodbye to summer and gear up for the start of a new academic year at colleges and universities. While mention of college sports often conjures up thoughts of football on crisp autumn days or basketball tournament brackets amid the frenzy of March Madness, the sport of climbing is being offered by more schools every year—often in the form of recreational university clubs. There is also an annual Collegiate National Championship competition sanctioned by USA Climbing.

“Since the Olympic committee sanctioned climbing and motion pictures like Free Solo hit the big screen, there is no doubt that climbing is trending upwards,” said Alaina Imberger, College Outside’s Director of Membership. “At College Outside, we certainly notice the growth of clubs and teams across the country. Climbing is special. It allows this generation of young people to experience a competitive sport in the collegiate arena, that also builds a bridge to the outdoors and encourages them to spend more time in mother nature.”

Here’s a closer look at five of the top college climbing programs based on College Outside engagement and roster numbers:

Specs: The climbing wall on the Stanford campus is 28 feet tall, with approximately 7,000 square feet of climbing space. Last year, the school saw 26,000 check-ins at the wall, with 5,000 of those being unique individual users. Additionally, Stanford’s climbing team is the reigning champion of USA Climbing’s Collegiate National Championship.

The climbing program at the university was spearheaded by climbers and Stanford Adventure Programs staffers Phil Sandlin and Andrew De Torres. It was those two who first shouldered the responsibility of teaching classes and managing the school’s climbing wall. But since then, the program has boomed in popularity and today there is a dedicated routesetting team at the school that aims for total route turnover every ten weeks. There is also a staff of certified climbing wall instructors to teach both academic and recreational climbing classes to students. The campus wall also hosts an annual bouldering competition called C.R.A.G. (Climbers Rage Against Gravity), as well as holiday-themed events.

“Stanford attracts, recruits, and admits some of the most high achieving students in the nation,” says Francis Liaw of Stanford Adventure Programs. “Though the focus may be on academics, the students bring that mentality across all aspects of their lives. Therefore, if they enjoy climbing, they are striving to perform at a high level, which is potentially a reason why we currently have a climbing team that is back-to-back collegiate national champions. Conversely, the university encourages the students to broaden their horizons, challenge themselves, and experience new things; and that provides the opportunity for students who considered climbing the space and support to give it a try. The culmination of these diverging ideologies widens the spectrum of patrons that uses our facility and creates that special/unique/at times challenging climbing community.”

Community Is More Than A Wall
University of Michigan

Specs: The University of Michigan does not have a climbing wall on its campus, but those in the Michigan Climbing Club—currently around 200 members—usually turn to a nearby gym, Planet Rock, for their climbing sessions. This creates a unique synergy between the commercial gym and the university. “A lot of students try climbing at Planet Rock and fall in love with it, but lack a community,” says Shalina Gupta, the school’s climbing club president. “That’s where Michigan Climbing Club comes in, and our social activities and friendly members get people to stay.”

The Michigan Climbing Club holds group climbing classes three times per week at Planet Rock and has recently added a climbing team. The club also focuses on outdoor climbing trips, making regular treks to Red River Gorge, New River Gorge, Stone Fort, and elsewhere. The university’s Central Campus Recreation Building is scheduled to get a climbing wall when it reopens from renovations in 2023.

When speaking about the club’s growth, Gupta says that the members range in commitment, but there is a core group that attends social groups around the university. “For recruitment, we attend Festifall, Northfest, and Winterfest,” Gupta says. “These are the University of Michigan’s organization fairs where clubs can set up booths, talk to interested students, and advertise mass meetings. Aside from that, a lot of people hear about rock climbing from their friends or movies and email us expressing their interest in joining.”

Specs: The climbing wall at West Virginia University, constructed in 2001 within the school’s Student Recreation Center, is an elaborate structure that ranges from 35-50 feet in height. There are ten top rope sections on the wall, for a total of 3,500 square feet of climbing space. The wall gets frequented by approximately 250 climbers per week. There is also a bouldering portion of the wall that is statistically the most popular section.

Although the university’s climbing club does not offer much specialized programming at the wall and opts instead to focus its programing and education on nearby outdoor crags, a climbing team was recently established with the aim of competing nationally. All the outdoor programming works in conjunction with the climbing club—with each spurring interest in the other. It creates a portion of the student body that is psyched about the outdoors and then eager to maintain that psyche at the school’s climbing wall.

“I think what allows West Virginia University to have such a large and vibrant outdoor community is due to our fantastic first year trips (FYT) program that encourages students to take a 5-6-day trip in either the front- or backcountry the summer before their first year of college,” says Alex Kew, who heads up the university’s climbing wall. “This builds a love for the outdoors into students from the start and so they engage in other recreational activities across campus with that much more zeal.”

The most prominent group of climbers at the University of Massachusetts are the members of the UMass Climbing Team. The 30-member squad that was started last year by student Brynne McConnell with the aid of another student, Nathaniel Murphy. The two were former high school varsity athletes—and in college they missed the challenge and team camaraderie of competitive sports. Soon they successfully got climbing recognized officially as a club sport at the university and held tryouts in the fall. Today, the team is a fun-loving but very structured group, with official practices being held at least two nights per week at Central Rock Hadley.

“My long term vision for the team was to build a close-knit community where all the climbers at UMASS can come together and learn from one another,” reflects McConnell. “Coming from a history of team sports in high school, all of my teams felt like small families and I hope that the UMASS team can grow into that. UMASS also certainly has the talent to grow into a strong program over the next few years. Being located so close to some of the best outdoor climbing in New England certainly helps as well. All in all, I really just hope that the team can open up students to more opportunities and introduce climbing to people who might not have discovered the joy of climbing.”

Specs: The climbing wall on York’s campus is 32 feet tall and covers more than 1,000 square feet. There is also an attached bouldering area that is 11 feet tall. The various walls get frequented by approximately 120 climbers per week. The school offers climbing as an academic class, which meets at the wall once per week. (Homework for the class includes required additional climbing at least twice throughout the given week).

The college’s climbing club was started approximately five years ago and quickly entered competitions as part of the Mid-Atlantic Climbing Competition Series. Other schools that frequently participate in the series include Loyola University Maryland, the University of Delaware, Towson University, and others. York’s climbing club—and its team—are technically a student organization, so they are assisted by the college’s sport and fitness center but remain mostly self-sufficient. Several members of the club also work at the climbing wall, helping to set routes and organize competitions.

“The thing that makes York’s climbing community special is the passion and dedication of our students,” says Rachael Finley, Director of Campus Recreation at York. “Our students take ownership of our climbing competition, the routes, and the environment in the wall area. Through the mentorship of our Climbing Wall Manager, they are taught technical skills to keep the wall safe and create quality routes, but they also develop human skills to create an inclusive climbing environment and share their skills with others. Simply put, without our students, the wall would be worthless.”

Helping People Do What They Were Born to Do: Behind the...