AZ on the Rocks has served climbers in the Phoenix area for nearly 10 years, but it was only this past summer that they decided to make a significant change to the way they operate: They decided to limit the number of memberships they would offer.

CBJ talked to AZR owner Kevin J. Berk about the reasons behind the membership cap and how it is working out.

Berk explained that the idea grew out of their commitment to providing a superior level of customer service and ensuring that members have an amazing experience at the facility. This past summer, however, when AZR, which has 14,000 square feet of climbing, approached the 1000-member mark they noticed that it was becoming harder and harder to meet this commitment. “We found that when the business is really busy … it’s difficult to provide the level of service that we want to provide and that our customers expect to be given,” Berk said.

After getting feedback from members and staff they decided to put a cap on the number of active memberships. They originally decided on 1,000 members, but since it was summer, when most people are eager to escape the 100 plus degree weather and enjoy some air conditioned recreation, they quickly amassed an 80-person waitlist.

To alleviate this pressure they added some additional member-only hours (noon to three PM on Mondays and Wednesdays, in addition to the member-only hours they already had on Tues and Thursday evenings) and bumped the cap to 1,100.

Since that time their membership numbers have stayed right around the cap. They often have a few people on the waitlist, but there is enough turnover every month that the wait has not been very long. When a spot does open up, AZR emails the first person on the list and they have 7 days to come in and purchase their membership.

The Economics of Demand

For any business that experiences demand that is outpacing its ability to supply services, their first thought is most likely about how they can increase supply. For a gym, this often means expanding, either at their original location or at new locations. When asked if they were contemplating expansion, Berk was hesitant to come to the conclusion that there was sufficient demand for another location. “I don’t know that the membership numbers warrant another facility,” he said.

Of course the other way to deal with an over-abundance of demand is to raise prices. Berk said that over the past nine years AZR has only had one minor price increase, while many of their costs have continued to rise. As a result, Berk said that a price increase is “definitely something we are considering” but stressed that any increase would be modest.

While a few people have been disappointed that they have to wait to purchase a membership, most customers are happy with the decision. “For the most part it’s been overwhelmingly positive. People were complaining there were too many people in here, and parking was an issue,” said Berk.

The cap has resulted in financial benefits for the business. Berk reports that since they implemented the cap membership numbers have been less volatile and members haven’t been freezing their memberships. This steady stream of revenue has been welcome. “If your membership base goes up and down in a volatile manner it’s difficult to forecast, it’s difficult to plan for. So we hope that from a business perspective [the cap] also makes sense financially,” Berk said.

Another unexpected benefit of the plan has been creating a sort of “goldilocks” balance of not too many and not too few climbers at one time.

“It’s funny, climbers are a unique breed. When no one is there they are not happy because no one is there, and they are social in nature — climbing is social. And when it’s super busy they’re upset they have to wait in line for a climb,” Berk said. “So we’re trying to create that type of balance between keeping that social aspect without creating lines.”

So far the cap has been a success for the members and owners. “It’s not just about cramming as many people we can into the facility. It’s a balance of providing superior customer service while at the same time still running a successful business,” Berk said. 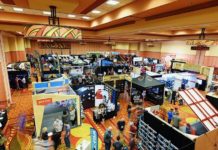 It’s that time of year! Summer is here, and so i

Volunteers have served in a myriad of roles at cli

For our first installment of Ask A Setter, Louie A

Last week, the @climbingwallassociation released i

Walltopia’s WICS – Time to Get Global