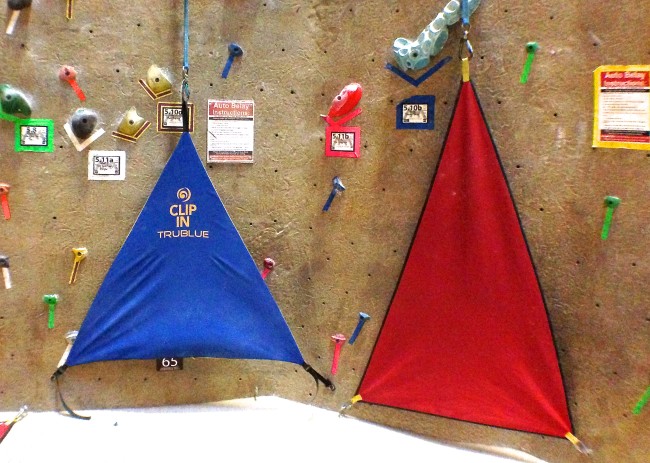 The latest safety trend to hit the climbing gym scene is auto belay barriers. These physical barriers are designed to prevent users from unintentionally climbing without first attaching themselves to the auto belay leash. Climbers that forget to clip into auto belays have resulted in increasing numbers of accidents as the devices have become more prevalent in climbing gyms.  This “unintentional soloing” resulted in the death of a climber in Texas this past September.

Belay barriers were first created by resourceful gym owners trying to reduce the risk of climber error when using auto belays. Early innovators like Mesa Rim, Vertical World, Climb Iowa and Rock Sport in Reno all designed some version of belay barriers for their facilities.

These barriers have done such a great job of reducing climber error that Head Rush Technologies, producer of the popular TRUEBLUE auto belay, has just introduced the first commercially made barrier called the Belay Gate, which retails for $40. Head Rush’s CEO, Candie Fisher, told CBJ that the Belay Gate went through a trial period at a handful of climbing gyms.  They were looking to find “a design that would be noticeable both when the auto belay is clipped in to the gate (to alert people to clip in) and when the climber is climbing on the auto belay (to alert others that there is a climber above),” said Fisher. “The padded nature of the design allows for this and provides a suitable surface when someone lands. Our belay gate is adjustable, so it always looks neat and aesthetically pleasing on the wall.”

Also coming soon is the SureClip auto belay barrier from Elevate Climbing Walls, which just received its patent pending publication for the product. Rich Johnston, CEO of Elevate Walls, said the SureClip will be sold for an estimated $80. Johnston, who also owns Vertical World climbing gyms, said, “When we decided to put auto-belays into the gyms we needed to come up with something to alert the customer to make sure to clip in. The idea of a tarp system had been thrown around for a couple of years, but no one really took it any where. We decided it was a viable system, thus we filed for the patent.”

The idea behind the barriers is to create a physical barrier that needs to be moved before the user is able to climb. The barriers are placed over the start handholds and footholds, and the climber must transfer the auto belay carabiner from the barrier to their own harness to access the climb. Of course the barriers cannot completely stop a climber from attempting to get on the wall unclipped, but the barriers could provide a crucial reminder to the absent minded climber.

The Humanfactorsblog.com, a website devoted to the field of human factors in design, recently had an article about auto belay barriers at the Triangle Rock Club in Raleigh, North Carolina.

One characteristics these accidents share is that the victims were experienced and used the auto-belays frequently. When a procedure becomes automatic, it becomes more accurate and less effortful, but it also becomes less accessible to the conscious mind. When a step is skipped, but all other steps are unaffected, it’s especially hard to notice the skipped step in an automatic process. It functions as a guard. This adheres to the hierarchy of safety: First, try to design out the hazard. Second, guard against the hazard. Last, warn. These are in order of effectiveness. Prior to this device, I had only seen signs on the wall saying “Clip in!” (And a year ago, even those didn’t exist.) This device physically blocks the start of the climbing routes, demanding interaction before one starts climbing.

Aside from user error, the auto belays used in most climbing facilities today are exceedingly safe. Modern devices control the descent of a climber through hydraulic or magnetic eddy current braking systems which are reliable and require little maintenance compared to the first generation of friction-based braking systems.