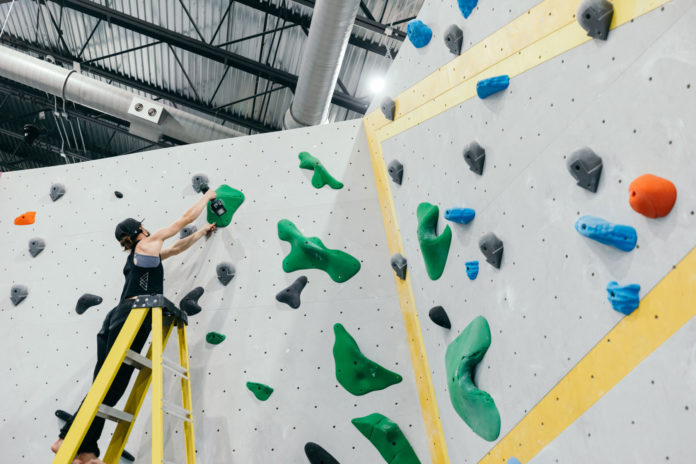 It’s no secret that users of relatively easier climbs make up an important part of any gym community, and that keeping them engaged and coming back to the gym―especially providing options for new climbers to visit and enjoy the gym―is a large part of running a successful climbing facility. Because of this, it’s very important to aim for the same diversity in what routesetters offer to these users as is provided for users of relatively more challenging climbs. So how can we avoid setting the same old, stale jug ladder and provide better routes for this often underserved part of our gym communities? In this month’s article, we’re going to look at some good ways to do just that.

QUESTION: What are some tricks to keep easier climbs interesting and not just ladders?

The historically standard formula for setting most easier climbs revolves around a more or less straight up and down ladder, set with jugs and chunky footholds. There’s not necessarily anything wrong with this, as it’s very accessible and gives beginning climbers in particular an easy entry into an activity that is new to them and something that their body is not yet used to. Most new climbers understand the thought of climbing a ladder and have the mobility to do so, and duplicating that kind of a challenge with holds on a climbing wall usually equates to instant success with beginners. Keep setting those by all means, but realize also that it’s important to challenge the users of easier climbs as well, and to give them and all climbers avenues towards not only improving physically, but to learning new techniques and movement. Providing this kind of route diversity should be our goal as well.

There are a few main areas that we have to work with when pursuing this goal: the holds used, the wall angles set on, and the movements proposed. Choosing one or more of these areas and straying from the routesetting norms in your facility are sure fire methods of mixing things up and obtaining the route diversity that is often lacking on easier climbs.

The standard “easy” climb is made up of the most positive jugs a setter can find in the hold room, but this does not need to be the case. Depending on the angle of wall that you’re setting on, you can often propose very secure and easier movement using large-surfaced flat holds or in-cut slopers as well. You can also sprinkle slightly less positive holds in with the jugs to add an element of commitment or pump throughout the climb. Adding some variety into the holds you choose to set with is a great way to mix things up and get away from the expected norms on less challenging climbs.

With the state of the industry these days, most gyms have a healthy collection of volumes in their inventory. Consider using these on your easier climbs as well. Not only will it help users of these climbs to develop the skills related to climbing on them, but it will allow you to present a very different visual offering to this user group than what they are used to seeing. You can just about always get away with using less positive holds on the volumes as well.

In a similar way, you should not keep back all the biggest and most expensive holds for use on harder climbs. Instead challenge yourself and your setting team to use them across all difficulty levels, including the lower grades. Users of these routes will enjoy climbing on holds that they may not otherwise be able to experience, and they can add a lot of aesthetics to a possibly otherwise visually boring climb.

Consider also making patterns with the holds you use to provide more visual appeal. This can revolve around a cluster of similar looking or similar feeling holds, nesting several positive jugs into each other to create a fan feature, or using in-cut edges and other holds end to end to simulate a flake or tufa system. Usually such things are not included as often when setting easier climbs, and doing so will help to bump up the diversity of setting hugely for this too often underserved group of climbers. It also gives them the chance to feel special and be treated as such, in that the setting team is making a dedicated effort for their enjoyment beyond what they might enjoy at a competing facility elsewhere in your market.

Set on All Angles

Considering the whole facility when selecting the wall terrain on which to set your climb is another tactic for keeping things interesting on lower grades. Challenge yourself to sprinkle easier climbs across all wall angles and steepness. This will help new climbers especially become more comfortable with climbing on those angles and keep the entire gym open to their use, instead of relegating their climbing to the lower-angled walls only.

You should also be sure to set less challenging climbs on features like arêtes and corners too. This will often allow you to create easier movement without using such positive holds, and will help new climbers to learn techniques like heel-hooking and stemming that are basic components of climbing. Practicing these movements will help them progress more quickly, and become more well-rounded climbers.

Although beginning climbers specifically may be somewhat limited in the movement styles and techniques that they will be able to instinctually read and execute, we can still mix things up a bit and distance ourselves from the classic “ladder.” Sometimes simply introducing some degree of lateral movement will be enough to challenge them with having to shift their center of gravity and weight in a different manner. Besides up-and-down and side-to-side movements, think about setting in-and-out climbing as well, which larger shapes and wall features can help achieve.

As another challenge, we can also add intended hand matches, cross-over moves or hand bumps. These should all have built-in penalties if they are not executed properly to reinforce properly reading your intended sequence. Perhaps adding an undercling or two will spice things up enough as well, as they tend to engage the biceps more and to require a different body transition over the holds. None of these are overly complex movements, and all should make sense on appropriately sized holds to keep things accessible for the climbers using them.

My personal thought is that we should put an equal amount of effort into setting relatively easier climbs as we do into setting relatively harder climbs. Even more so with users of the former, their ability to advance through the grades and to develop as climbers rests firmly in our hands. We owe it to them to take that responsibility seriously and to provide a diverse and interesting offering of climbs for them to enjoy and challenge themselves on. Anyone can set a jug ladder―we need to do better.

Ask a Setter: Send Us Your Questions