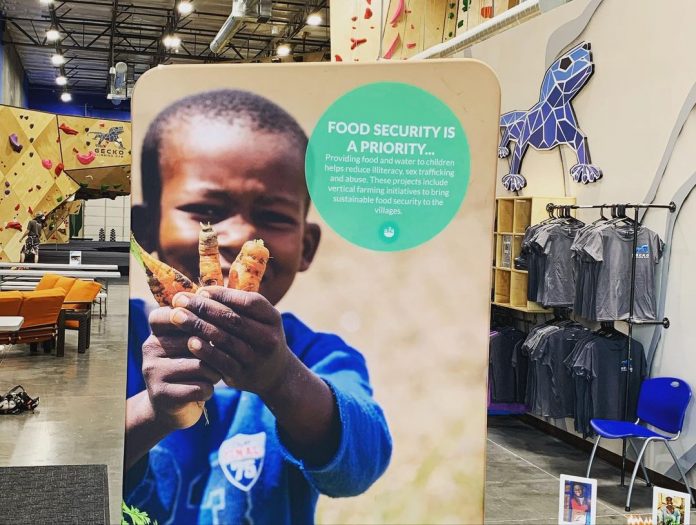 When Chris Tansey decided to found Gecko Climbing Gym in Phoenix, Arizona, he hoped the gym would be a place for recreation, fitness, and growth for the local community. “The climbing community in Phoenix is growing and Gecko Climbing Gym seeks to facilitate that growth, celebrating the sport’s progress and debut in the upcoming Olympics,” Tansey stated at the time.

Yet, on the cusp of the gym’s grand opening last spring, Tansey realized the gym presented opportunities to also benefit communities that were much farther away—approximately 10,000 miles away, in South Africa.

Tansey’s personal interest in South Africa actually predates the establishment of his Arizona climbing gym by many years. A former youth pastor in Scottsdale, Tansey had long worked with an organization called Orchard: Africa through his church; he even visited South Africa once to see the organization’s programs first-hand. The establishment of community-led feeding centers, preschools and agricultural projects—all of which Tansey had known Orchard Africa to focus on in trying to help reduce poverty in the areas they work—were strategies that focused on long-lasting communal results, according to Tansey.

“You can see evidence of their impact in the communities they’ve served for over two decades,” Tansey explains about the programs he witnessed in South Africa. “The children in their preschool programs are excelling better at reading and writing better than government-run schools. Families running Orchard Africa’s farms or community gardens on their property are the hub for social life and good-tasting food. Orchard Africa’s feeding centers are, for many children and community members, the only meal they’ll receive that day. Orchard Africa is also an advocate in the state for long-term change as it relates to tribal land rights and grant money for underserved communities.”

But the completion of the Gecko gym—and the newfound customer base that a climbing gym could serve in Arizona—allowed Tansey to spread the word about Orchard Africa’s projects to an even wider audience than his church’s congregation.

The new Arizona climbing gym also created novel opportunities to raise money and donations outside of a church’s fundraising parameters. Case in point was Gecko’s first climbing competition, held in conjunction with the gym’s grand opening last month (April). Tansey made the decision to give half of the gym’s proceeds from that day to Orchard Africa.

“My wife and I believe in the work that they do and would love to continue to support not just personally, but also through our climbing gym,” Tansey says, adding that he and his wife hope additional competitions at the gym will serve the same purpose.

In addition to using his Phoenix gym and his collaboration with Orchard Africa to help reduce poverty in areas of South Africa, Tansey has another mission in the works. He notes that he would not be opposed to someday opening a climbing gym in South Africa, which could act as a sister gym to the gym in Arizona.

Additionally, Tansey would like to help host and facilitate “first-time climbing experiences” for people in Cape Town, Rocklands, and other regions of South Africa.

“The goal would be to take a group of Gecko Climbing Gym members and staff on a trip with Orchard Africa to serve alongside Orchard’s crew and offer first-time outdoor climbing experiences to South Africans that do not have access to REIs or any professional equipment to explore their own backyards,” he explains.

Tansey notes that he recently shared this goal with some climbing industry brand representatives on a conference call and the reception was encouraging: “Hopefully this isn’t some distant dream but a near future reality.”

For now, Tansey’s immediate focus remains predominantly on the operation of his new Gecko gym. With that, he has been brainstorming whether a portion of the gym’s earnings from day pass sales or memberships could be contributed regularly as gifts to Orchard Africa.

“I want our organization to be one that is outward-focused, serving both locally and globally, and uses our passion for climbing to make a positive impact,” Tansey emphasizes. “Every organization can benefit from looking outward rather than just looking inward. Climbing is more than just a passion for us. Climbing has the power to unite others, inspire others, and positively change a life.”

Industry Partnerships in the COVID Era: Preserving the Best of Climbing...