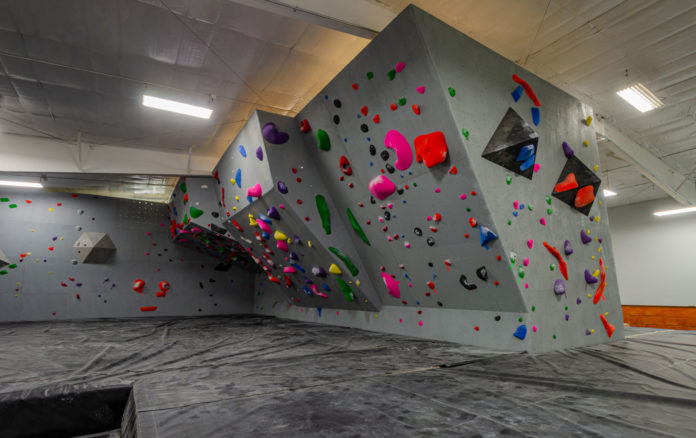 Specs: After years of climbing in garages on homewalls and their Moon Board, childhood friends Ben Williams and Chris Deal decided it was time to open their own climbing gym. Fargo Climbing, located in Fargo, North Dakota, opened its doors to the public on March 26th of this year. Initially, Deal had been trying to open a gym from 2015 to 2019, when he was going to school for his MBA―and he very nearly did. “I had saved up a decent amount of money, found a couple prospective smaller spaces, and shot a Kickstarter video to launch the campaign to get the remaining funds I would need,” he told CBJ.

Then a close friend put him in touch with the owner of Nature of the North, a company in the Fargo-Morehead area with the mission of “building and supporting local communities by breaking barriers that prevent people from getting outdoors.” Nature of the North was planning a climbing space of its own and offered Deal a position as Director of Climbing, in which he would run the climbing side of the business. (Deal recounts some of his rewarding experiences in that role in this interview on CBJ.)

But despite the climbing wall’s popularity, opening in June 2020 during a pandemic―at 25% capacity for its first 9 months―hit the project hard. “We’ve been pushing to get back on track ever since, but launching a physical location in that environment destroyed all of our plans and projections,” wrote owner Jon Walters on Nature of the North’s website, ahead of the facility’s closing last May. With the company shifting its focus back to community events, workshops and outdoor activities, Deal decided the time was right to pursue his own project. “[Nature of the North] was a wonderful space, and amazing for kids. A very neat spot that we will all miss here!” said Deal.

A bouldering-focused facility as well, the new Fargo Climbing gym is serviced in full by the two owners, who wear all hats at the facility. They built the 4,000 square feet of climbing walls by hand, and collaborated with a local individual who does tarp coverings for boats and trailers to create the padding. The owners even installed their own garage Moon Board next to the climbing walls, which are accompanied by a variety of weights, hangboards and other fitness equipment. Some remnants of Nature of the North―picnic tables, rugs, a pallet chair and cubbies―live on in the gym as well.

Located in the city center―with hotels, restaurants and new developments nearby―Deal and Williams hope to introduce more Fargo-Morehead residents to what climbing can be. On Mondays they hold workshops (such as slab climbing techniques and Moon Board seminars), and Tuesdays they host an Intro to Bouldering Class. This summer, Fargo has summer camps for children, in addition to their structured youth team. And they’re hosting a teaser competition in the coming weeks to prepare the community for “The Woodchipper,” an aptly named competition taking place this fall.

In Their Words: “There are so many gyms out there that are amazing to go to…and it’s very clear that they’ve got something special there…We want our members and users to be just as passionate about our building and business as we are.” – Christopher Deal, co-owner

New Gym Coming to Florida Is a 12-Year Dream in the...