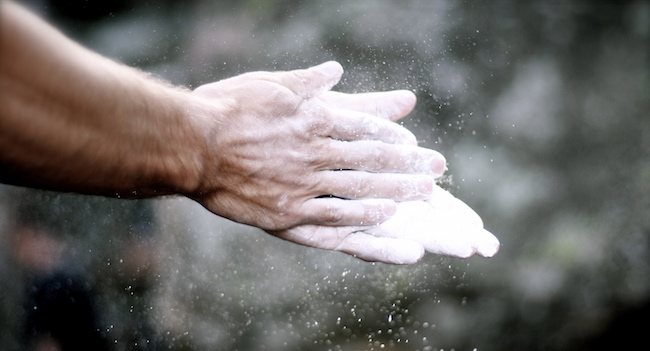 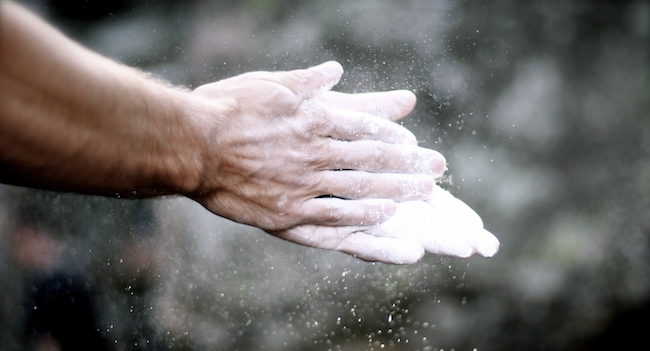 Ever since John Gill, borrowing a tactic employed by gymnasts and powerlifters, first coated his hands with a now-ubiquitous white powder before attempting a boulder problem, chalk has been a critical component in nearly every climber’s toolkit. Along with sticky rubber shoes, it is the one thing all climbers have in common. Boulderer, bolt clipper, tradster and gym rat; all take a dip of chalk before setting out on whatever escapade lay before them. It is so common and seemingly innocuous that few climbers ever take a moment to consider where it came from, what it is, or how it ever ended up in their chalk bag and on their hands.

In some ways, chalk is the fossil fuel of the climbing industry. Formed millennia ago, what we think of as climbing chalk started out as sea shells and sand. Left to sit at the bottom of ancient oceans, these materials eventually became calcium magnesium carbonate, or CaMg(CO3)2, better known as the mineral dolomite.

A close relative of limestone, dolomite is found wherever there used to be oceans or deep basins. Like the petroleum products that power our modern world, dolomite deposits have to be mined from the earth before they can be processed and turned into, among other things, chalk.

Dolomite is mined around the world, though it is primarily sourced in Southeast Asia, where the abundance of the mineral coupled with low wages and loose safety regulations make for a cheaper product. Getting the mineral out of the ground and processing the raw materials is an involved industrial process, and as such the facilities that perform these operations are secretive about their proprietary methods. In actuality, very little is known about these procedures, even by the companies that sell the final product.

Once the dolomite has been extracted and processed, it is sold to consumers and other companies in bulk amounts, primarily through the e-commerce website Alibaba. Dubbed the world’s biggest online commerce company by the Wall Street Journal, Alibaba is the Chinese Amazon, though it is even larger in scope and reach than Amazon. For most companies that sell climbing chalk, this is the end of the road, as the same companies that mine and process the chalk also package and ship it from their factories, eliminating the need for climbing companies to have their own packaging or distribution facilities.

Kevin Brown, co-owner and founder of Friction Labs, sheds some light on the process. “You yourself could start a chalk company tomorrow and do it the same way everyone else in the industry does. You contact these companies on alibaba.com, you buy the chalk, you send them a label, they print it and wrap a block in it and drop-ship it to your accounts around the world.”

While it may not be as easy as Brown suggests, the fact remains that very few climbing companies have anything to do with making the chalk they sell outside of marketing it.

Despite its popularity and necessity to the climbing world, chalk is still an underrepresented product category. There are no standard practices or industry regulations that monitor the quality of chalk or track its sales. Some suppliers may be more consistent than others, but the lack of regulation throughout the entire process means each batch can be a shot in the dark. Not surprisingly, quality control is predictably inconsistent as it is up to individual brands to select their supplier and test the chalk themselves.

“The difference between chalk companies is who they get their chalk from,” Brown says, adding that no chalk is 100% magnesium carbonate. Brown went on to say, “There’s always filler present, and the only real way to analyze chalk is with an X-ray florescence test, which shows all the elements present in a given compound and requires additional tests and a PhD to interpret all the data.” Needless to say, going that route is an expensive endeavor, one that most companies eschew in place of a less scientific approach.

Brooke Sandahl of Metolius Climbing explains their approach in different terms. After gathering samples from many different suppliers, Sandahl tests the various samples, looking for the magical combination of grain size and moisture content that optimizes the uptake of oil and sweat in skin. This process is done the old fashioned way, by chalking up and getting on the rock. “Over time you develop a feel for it, like wine tasting,” he adds.

Like the craft beers and micro breweries that are so popular these days, climbing chalk is in the midst of a craft craze. Metolius was the first brand to formulate chalk custom made for rock climbing with its venerable line of Super Chalk, which first hit the scene in the early 90s and has remained relatively unchanged since. In recent years Friction Labs has burst onto the scene as the only company that specializes exclusively in chalk, and newcomers like Patxi Usobiaga’s PUC Chalk are showing up overseas.

While most brands market their chalk as being unique or more pure than others, few actually have a proprietary process that they apply to their chalk to differentiate it from the rest. Super Chalk is well known for its ‘drying agent,’ which is a totally inert substance that is also used by McDonalds to thicken milkshakes. It is safe to eat, though you wouldn’t want to inhale any, and is applied to their bulk chalk at a company-owned facility in China. The details of that process and the drying agent itself are trade secrets, as are the methods Friction Labs uses to concentrate the magnesium carbonate and refine the texture of the chalk they buy from the same overseas distributors.

For some climbers chalk is chalk, and the cheaper and more easily acquired the better. For the connoisseurs, however, price and accessibility take a backseat to feel and friction. “Most domestic chalks are pretty good and don’t hinder performance,” Sandahl says. However, if all beer tasted the same there wouldn’t be breweries springing up left and right, and the same is true for chalk.

The realm of climbing chalk is shrouded in mystery, from the details on how it’s extracted from the earth to what is added to it or how it is refined, and it is no surprise that sales data is similarly hard to come by.

Chalk is not tracked as a product category, and most retailers throw it in with other climbing accessories like athletic tape and skin care products. The companies that sell chalk are equally tight-lipped about their sales data as they are about their unique products. Sandahl gives a general impression of the numbers, though, indicating they are higher than you might suspect. “It’s fairly astounding how much chalk we sell,” he says, “and industry-wide I would say it’s a multi-million dollar category.” When asked how much chalk Friction Labs moves, Brown would only reply by saying they have perhaps 3-5% of the market share, and that they do not sell nearly as much chalk as the other brands.

Though data may be difficult to unearth, it is obvious that chalk is an important and lucrative sale item. “Part of the allure of selling chalk was it’s a fairly simple product and it seemed like a no-brainer to add to the Metolius product line,” Sandahl explains. “It’s like food or toilet paper in that you are continually going through it.”

While most brands sell chalk as an additional income source to their primary products, Friction Labs only sells chalk. Their approach is to offer product directly to the retailer as a means of boosting the retailers’ own profit. Brown lays out the details of their approach, stating that “gyms need to find a way to increase the revenue per member.” A former gym owner himself, he goes on to say “it’s really expensive to start and maintain a climbing gym, and your whole audience that’s there is using chalk. You have a captive audience and not selling chalk or making it an easy process is a missed opportunity.”

Climbing shoes have eclipsed the $200 mark and gym day passes are more expensive than ever. The industry is expanding and yet, for the most part, chalk is chalk. While many companies, such as SoiLL and Evolv, have expanded their product line to include chalk, few approach chalk as more than a climbing accessory. It is only a matter of time before additional chalk-specific companies arrive on the scene. The only question is, how much money are consumers willing to pay?

Parallels can be drawn to something like coffee or beer, products with countless iterations and price points and sales that are entirely dependent on the preference of consumers. Some people prefer a $.99 cup of joe from the corner gas station while others choose a $10.00 pour-over from a boutique coffee shop, and if climbers are willing to pay $200 for shoes, $20 for a bag of chalk doesn’t seem unreasonable.