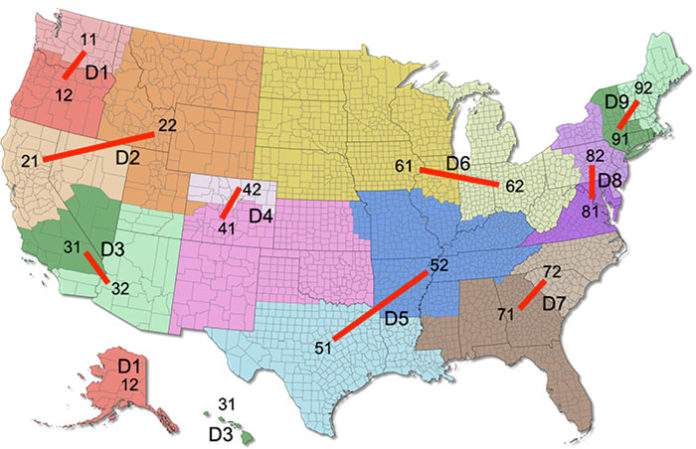 USA Climbing’s (USAC) Board of Directors has confirmed the realignment of the regions and divisions for its Youth and Collegiate competition series. The approved recommendations came from USAC’s Realignment Task Force (RTF), which was formed in 2018 to review the organizations’ geographic structure for better “inclusiveness, athlete well-being, growth, and international success,” according to USAC’s press release. The changes will take effect in October for the 2020-2021 season and will be in place for four years.

“A big thank you to the RTF who spent considerable time gathering feedback from numerous constituents including significant input from our Regional Coordinators. The RTF conducted a thorough review of climbing gyms capabilities to host events and member geographic locations in an effort to balance competitor numbers across regions and address growing participation numbers,” said Marc Norman, CEO of USAC. “Again, I can’t thank the RTF enough for their tremendous work in ensuring our sport is well-positioned for future growth.”

The Youth and Collegiate realignment documents of the RTF identified several reasons for the changes. Mainly, the regions and divisions were believed to be becoming too imbalanced. The redrawn lines were designed to spread out the average number of competitors per division, as well as even out the estimated strength of the fields. Another consideration was keeping travel burdens on competitors and their families at a minimum, both to promote economic inclusion and acknowledge ongoing COVID-19 challenges.

“As our sport continues to grow, one of the challenges our Regions face is the large and uneven growth of competitive members on an annual basis”, said John Muse, Vice President of Sport at USAC. “The goal every four years is to redraw the regional boundaries to maintain a fair and balanced competitive structure and we support and believe the RTF recommendations will do just that.”

In the Youth series, notable changes included the expansion from 16 to 18 regions and 8 to 9 divisions. Regionally, Colorado will be divided North to South instead of East to West (with Denver split along I70), the Desert region was divided into two, and an entirely new region was added between the Midwest and Southeast areas. In terms of divisions, major changes occurred in the West, with the Mountain West joining Northern California, Southern California pairing with Arizona, and the majority of Texas combining with the new region previously mentioned.

At the Collegiate level, 13 regions consolidated to 7 divisions: West Coast, Rockies, South Central, Heartland, Southeast, Mid-Atlantic and Northeast. In addition to balancing the distribution of athletes, the shift to 7 divisions was also done to increase the number of potential host sites for National Qualifying Events and local competitions. Now, all but one division are expected to have over 200 athletes competing, instead of only four regions before.

Last year CBJ reported that climbing is thriving at the Collegiate level—a fact that was bolstered by the hiring of Rachel Owens in October to work towards climbing’s NCAA sanctioning. Stay tuned to CBJ for more news about USA Climbing’s efforts at the Youth and Collegiate levels.